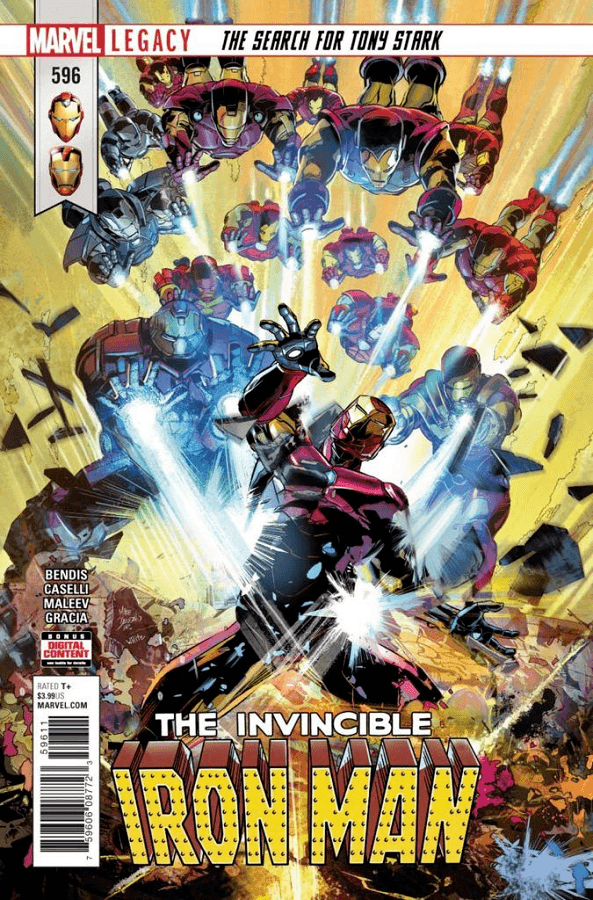 The Search for Tony Stark: Part 4 written by the indomitable Brian Michael Bendis and drawn by Stefano Caselli and Alex Maleev. I will be honest with you, I am incredibly bored with this storyline.

Stark was in a coma after the events of Civil War 2 and is finally coming to. He’s coming back to us through the beloved artistic method of hallucinatory conversations representing a deeper understanding of character. The metaphorical “meat” of this story is the least interesting aspect of it. The most interesting is the Bendis and Maleev’s constructed world of Doom.

I routinely read this comic forgetting how much I adored Infamous Iron Man. This month we get a full blown fight between The Hood assisted by a couple low-tier villains (Bendis’ bread and butter with The Hood character) and an off guard Victor von Doom. It should go without saying that the art is some of the best being created in comics right now. The beautifully designed fight is accompanied by some perfectly placed third-party commentary from Bendis, delivering a play-by-play that weaves into the conflict as smoothly as Maleev’s shading and as striking as Doom’s bloody tears. These seemingly unrelated portions of the book leave me optimistic that we’ll continue to get a taste of the Infamous Iron Man book at least until Bendis departs from Marvel.

Again, I try not to allow my utter fanboy adoration for Alex Maleev to overshadow Stefano Castelli’s impressive ass art. It is truly worthy to accompany the voice of Riri Williams. Where Doom’s story is action packed, Riri’s is much more subtle. This is where that famous (Infamous?) Bendis dialogue flies off the handle. Tensions between her and the authorities. The back and forth with her mother. The new love interest.

This portion of the book was a delight to go through, especially if you’re a fan of the art of Bendis. With the “Stark” portion of the story showing signs of wrapping up I’m excited to see the progression of Riri Williams’ character. In all, let’s enjoy the last months of Bendis’ run of Iron Man, a title he’s been so attached to for years.