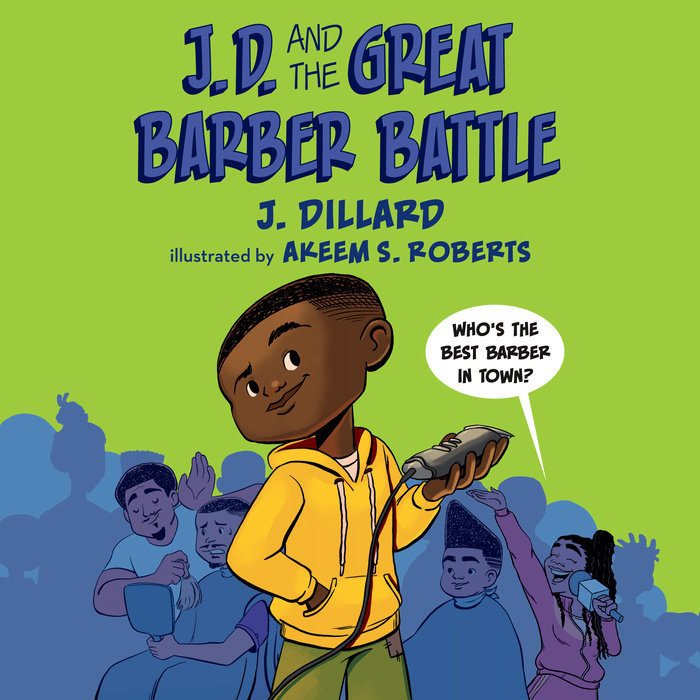 Everyone knows that in the Black community, when you find a good barber, it’s for life. You are basically in a loyal relationship. I, myself, had the same barber until his sudden passing (RIP Jim), but that’s how it is for us. However, what if you not feeling a barber? Well, you simply find a new one. However, it’s not so easy when you’re a kid. You’re usually relegated to going to whoever your parents take you to, and that was J.D.’s problem. At eight years old, he was stuck going to a barber who really didn’t care about kids’ cuts. But, like most Black boys, he wanted the freshest style and the one local shop wasn’t cutting it.

First, before I get into this review of J.D. and the Great Barber Battle, I want to say that as a fellow Mississippian, I was very proud to do this review. While Meridian, Mississippi is about two hours from where I am from, it was still nice to see and read something from a writer from my home state and a fellow HBCU grad.

J.D. is excited for his first day of third grade, and his mom gives him a haircut for the occasion. However, while his mom is great at a lot of things, cutting hair is not one of them. As J.D. describes it, his hairline looks like a “hilltop.” It is completely messed up, and he dons a snapback as a means to hide the first day hair tragedy. However, his best friend snatches the hat off (some best friend) and reveals it to the entire bus. J.D.’s hair becomes the topic of conversation and ridicule throughout his entire first day of school.

Not wanting to deal with the laughs, J.D. knows something must be done. After a mishap where J.D. puts a perm in his hair, he decides to take things into his own hands and cut his own hair. He has great drawing skills, so he convinces himself that drawing a straight line on paper equates to being able to give himself a better line up than his mother. In the end, J.D. is able to fix his cut, and does such a great job that the other boys want him to cut their hair. So, enterprising J.D. decides to start his own little barbershop and charge the other boys to cut their hair. As J.D.’s business is bloom, the local barbershop, Hart & Son, is losing out because none of the boys are coming in for cuts.

The Hart of the Problem

So as not to stretch this out too much, I’ll tell you the quick edits. Henry Hart, Jr., who owns Hart & Son, finds out where his business is going. He threatens to get J.D.’s family in trouble because of his business, even sending a health inspector to their house. Though scared, J.D. does want to lose out. He enjoys cutting hair, making his own money, and the boys like him. Unlike Henry, Jr., J.D. actually cuts the boys hair like they like it, while Henry, Jr. only cuts 3 basic, bland styles that haven’t changed since his dad, Henry Sr., owned the shop. To that end, J.D. builds up the courage to challenge Henry Jr. to a cutting competition, and the whole city shows up to see who is the King of the Clippers. I won’t spoil the ending for you or you little one, but it’s worth the read or buying for a young Black child to enjoy.

Fade to the End

Overall, I enjoyed this book. It’s a great, quick, chapter book for a third grader who is getting into reading. It is great to see a young Black boy’s joy being brought out in the book, and I know it would be an enjoyable read. The fact that it focuses on topics that young boys can really get into – hair, drawing, football, games etc. – really will get them excited. I also want to say that I thank author J. Dillard for having a girl not only be on the football team with J.D. but also be one of the best players. And the fact that none of the boys ever pull the “she’s good for a girl” trope. They all just know she’s good. Period!

Though I enjoyed this book, there is one thing that rubbed me the wrong way that I wish could have been handled differently. Henry Jr. directly confronts J.D. instead of saying something to his mother. This really gave me pause when late one night while J.D. is on his back porch, this grown man approaches him out of the shadows. As I kept reading, I just really got mad that this grown man would just approach an 8-year-old boy in the middle of the night (maybe late evening, but still). Then, when the health inspector comes, while no adult is home I might add, he literally pushes (not necessarily forcibly) into J.D.’s house to also confront him. I do not care how wrong my child may have been, two grown men speaking to him in these moments (randomly sneaking up in the middle of the night and barging into my house when no adult is home with them) would have been cause for some serious as…y’all know what I mean. Anyway, this was my only problem. I wish this had been handled in a less predatory feeling way, and I have to acknowledge that this is my adult mind reading this moment and seeing this as far more inappropriate than young J.D. or child reading this may. Just use it as a moment to teach stranger danger, appropriate vs. inappropriate interactions with an adult, and telling children to verbalize when they feel uncomfortable around an adult.

Brushing Off the Loose Hair

All in all, J.D. and the Great Barber Battle is a great read for young, elementary school kids who are able to read chapter books. It is well-written and easy to follow. J. Dillard did an amazing job of capturing the personality of J.D. and making him feel real. I also must mention the artist who brought J.D. to life on the page. Akeem S. Roberts is the Brooklyn-based illustrator who did the job of bringing J.D., his family and friends, and world to life. I love that level of cartoon quality to his artwork that felt like the best compliment to J. Dillard’s writing. I think some of my favorite illustrations were J.D cutting his little brother’s hair in the bathroom, seeing the finished product of J.D. cutting his best friend Jordan’s hair for the first time, a small one that shows J.D. on his way to the competition, and, of course, the final illustration from the competition.

I highly recommend that you get this book for some young Black child in your family, or just buy it and donate it to a library. Get more books like this out there for Black kids!

J.D. and the Great Barber Battle was published February 2021.

Check out our other literature reviews here.