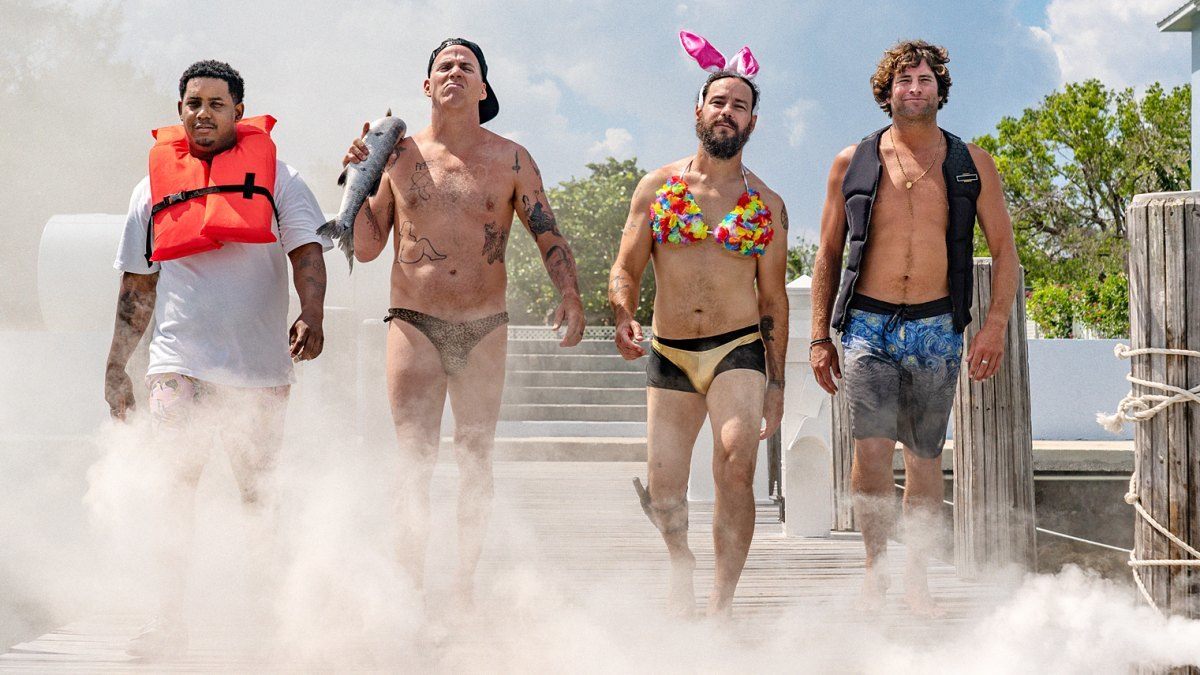 ‘Jackass’ Cast F*** Around and Find Out on Shark Week

The cast of the 4th movie installment of Jackass is on Shark Week this year. Before I start on this, I want to state, again, as I have done for the past two years of covering Shark Week for Black Nerd Problems, Discovery Channel does not give a fuck. Ever since that Mike Phelps Shark Week backlash in 2017 (where Mike Phelps swam against a CGI shark instead of a real shark) Discovery tv execs have said, “Oh yall wanna drag us? Fuck it. Each show we put out for Shark Week the cast gotta sign a waiver. Yall want that Kenny Loggins Danger Zone programming?! Fine. Let’s go. Don’t come crying to us when shit gets real. Yall wanted this. WE TRIED TO GIVE YALL EDUCATION AND YALL CLOWN US?! OKAY, WE ON SOME OTHER SHIT NOW. IT’S GOING BE EDUCATION AND WYLIN OUT.” All of which is to say, with the way Discovery been pushing the limits with Shark Week for the past two years, this team-up with the cast of Jackass was Thanos level inevitable.

Jackass x Shark Week feels like a team-up that shoulda took place years ago, right? I like to think there was a board room meeting with execs, publicists, and tv programmers and one person was just like, “Fuck it. Get Johnny Knoxville on the phone. This is the year we do it. I don’t even care anymore.” I’d like to think they all shouted “Danger Zone” in unison after that decision was made and then played the song by Kenny Loggins. Regardless of how it happened, we got the crew of Jackass on Shark Week in 2021. When Kevin Garnett shouted “Anything is possible” at the 2008 NBA Finals, this team-up comes to mind. Johnny Knoxville is the man behind the scenes this time around as he sends forth his peoples Chris Pontius, Steve O, Sean ‘Poopies’ McInerney, and Jasper Dolphin to head up this episode for Shark Week. The crew is joined by Shark Biologist Dr. Craig O’Connell for this outing. Craig literally tells these dues the do’s and dont’s of dealing with sharks. My man legit is like, “If yall get down there with these sharks and fuck around, you are going to find out real quick.” The premise of this is the Jackass Crew experimenting with what they’ve seen of Sharks reacting to in online videos.

For example, sharks will attack at whatever is colored in contrast with the water. The Jackass crew saw an example of this online with a shark attacking a bright yellow bag attached to a boat. Dr. Craig told them bright colors and glittering things will get their attention, so it’s best not to wear things that will call that type of attention to you. The best part of the show is Dr. Craig telling them what not to do then seeing his face as they do exactly what he said not to. We then see Chris Pontius get in the water wearing a matador suit with a bright gold shimmering trim while holding a giant red cape. Chris Pontius is swimming with bullsharks while wearing this matador outfit. I appreciate someone that will take a pun to these lengths. However, once them bull sharks started getting curious about him and bumping into him to see what the fuck he was, Chris proceeded to get outta dodge because if you fuck around with nature, you’re going to find out.

We then see a woman getting bit by a Sandbar Shark in an online video as she was feeding them bait. So for this experiment, Jasper is going to be out on a floaty tube holding a piece of bait that’s attached to a machine that will measure the amount of pressure a Sandbar Shark’s bite emits. Apparently, Sandbar sharks don’t have a lot of facts known about them. I’m assuming cause Great white Sharks keep holding the spotlight from them intentionally. I’ll give these Jackass guys credit. The stuff they attempt requires a certain amount of fearlessness. Although it doesn’t need to be mentioned, I wanna mention that Jasper Dolphin is doing this stuff while Black. I, too, have been Black and swam amongst calm sharks. Mans is out there with these Sandbar Sharks that are pretty aggressive and will rock your shit, floating on a tube, to measure how hard they bite. That’s a level of fearless and don’t give a fuck that I am too scared to step into. Now when them Sandbar sharks started sharking, we see Jasper have the fear of Prince Namor put into’em. As freaked out as Jasper may be, if he flips over off the tube and flails around, man is big done. Finito. Shark food, ya dig? Yeah, you get it. Jasper then gets brought in once shit gets hectic because again, “You fuck around with these sharks, you goin’ find out about these sharks.”

Poopies is up next with… I’m sorry. I’m not calling this grown man Poopies. I physically can but will not do so. His mama named him Sean, so I’ma call him, Sean. Sean does an experiment to see how fast sharks can swim (after seeing videos of folks trying to swim away from sharks). Sean is on a wakeboard with bait attached to him. The experiment goes off pretty well as they are able to get the speed, and Sean says he felt when the shark took the bait. They coulda walked away right then and there…but they decided to jump the shark, literally. Jumping the Shark refers to a term when a tv show “reaches a point at which far-fetched events are included merely for the sake of novelty, indicative of a decline in quality.” It comes from an episode of Happy Days where Fonzie literally jumps over a shark. The Jackass crew steps it up, and Sean is going to recreate the Happy Days moment… Well, it was a moment, cause dude does not stick the landing and gets bit by a shark. Badly. Tourniquet and all that. He had to get taken away to a hospital. Mans literally fucked around and found out about these sharks.

For those worrying, Sean doesn’t die. He’s fine afterward, I mean aside from having getting bitten by a shark and his arm wrapped all the way the fuck up. Mans had the waters looking like somebody spilled cranberry juice in it. Aye, this is what yall tv viewers wanted tho. When folks was complaining about Mark Phelps not swimming against an actual shark. You don’t think this woulda been the result right here? See what yall pushed Discovery to do? They hit the “Do Not Touch” button cause yall pushed them. They got Jackass up in it, and a man got his shit rocked. I hope yall happy with yourselves. We do get to see a nice scene with the cast (minus Sean cause chomp fucking chomp) swimming on a calm dive with sharks. They see sharks when they are calm and see how they are actually quite shy and just mind their own business. Which should be the true lesson here right? Don’t fuck around, and there will be no need for you to find out.

Yall can catch up on this episode on Discovery+ as it’s already available for viewing. Plus, you can also go check out Jackass 4 in October 2021. I’m only saying that cause mans got bit by a shark for this shit. I’d feel bad not mentioning the movie. Also, stop pushing Discovery, yo. They obviously willing to show you the real, and we saw just how real shit can get. Discovery’s Shark Week doesn’t jump the shark, but they’ll film folks fucking round and getting jumped by sharks tho. They really out here recording the real shit, man. Stop playing with this channel.