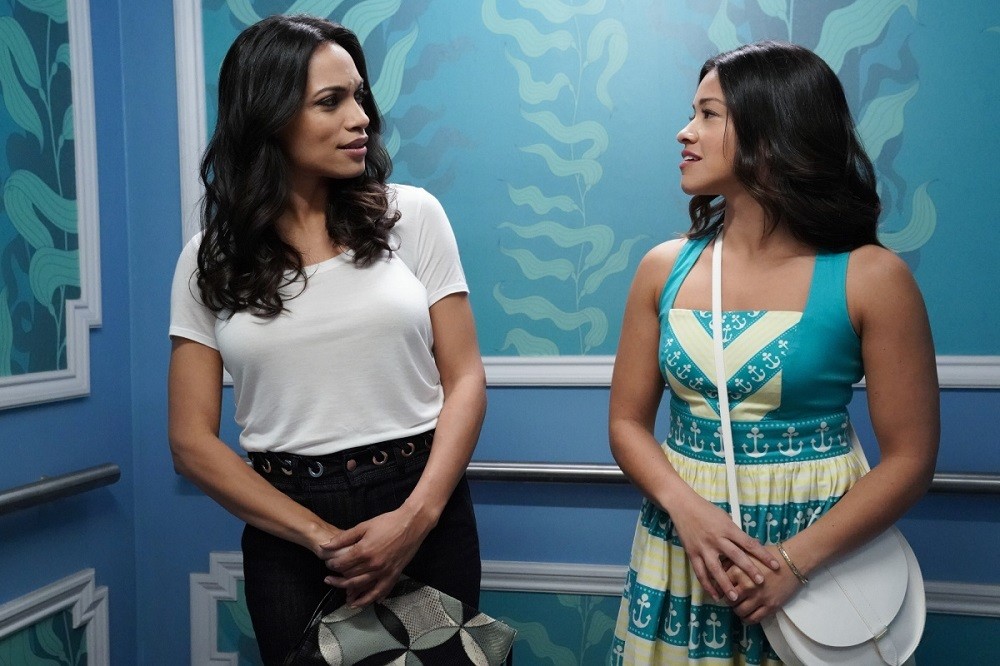 We took a quick break for a week there…after the MOST emotional episodes since dare I say.. Michael *sniffle* Let’s get into it.

We were all waiting for this time, the post surgery steps forward, cuz we are fighting the ISH out of cancer and keeping our Xiomara. So Xo in recovery and doesn’t seem to be complying with the doctors orders. She’s not going on required walks and is just so tired. I can’t blame her, but it looks like she could, and just isn’t for some reason.

Alba is in full caretaker mode and is just constantly prodding and fluffing pillows and reminding her daughter to take walks. Xiomara kinda flips and tells Alba she needs her space! When in reality she had found out Alba is taking the citizenship test and Xo just wanted her to go home and study. She happened to see a practice test and well – Alba had not done too well. There is a lot of secrets between our Villanuevas this episode, like the secrecy is what’s best for each other. Yea…No.

Once we got down to the truth for the Villanuevas, Xiomara admitted that she is not used to being weak, or being the one who needs care. She went outside and everyone looks at her like she is the sick one, she couldn’t bare it. It is going to be a long road and well, lets strap in we’re ready JTV. So all the secrets came out, they got down to business and assumed their proper roles in the family. They got Jane helping the citizenship test studies – Alba telling Xo to drink water and what not, and Xiomara just..recovering. 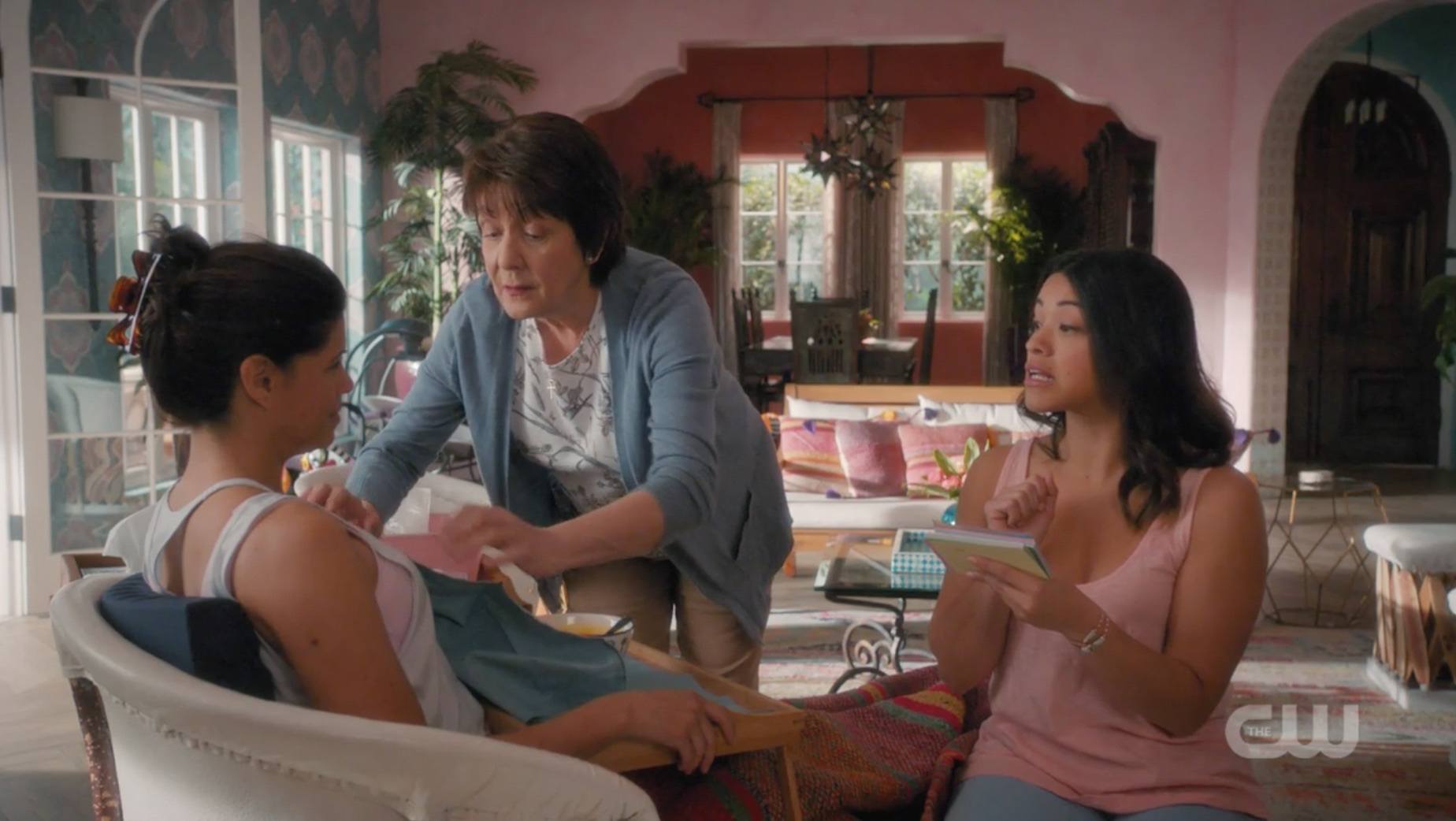 Rogelio has to tell Darcy that he can no longer be the “manny” (male nanny.) But his ego keeps him from just being honest about it and uses Xiomara’s cancer as an out. It was NOT GOOD when that got revealed… But in the end Darcy already knew that Rogelio had a new show! And Rogelio went through basically a bidding war in a playground to poach Felicia, nanny to the celebrities from Mario Lopez! In the end Darcy and Rogelio talk it out. It just seems like, they have been hating each other for so long, they don’t know how to show their real feelings and just be the good parents for Baby that they want to be. I feel like they have turned a corner on it, but you never know. 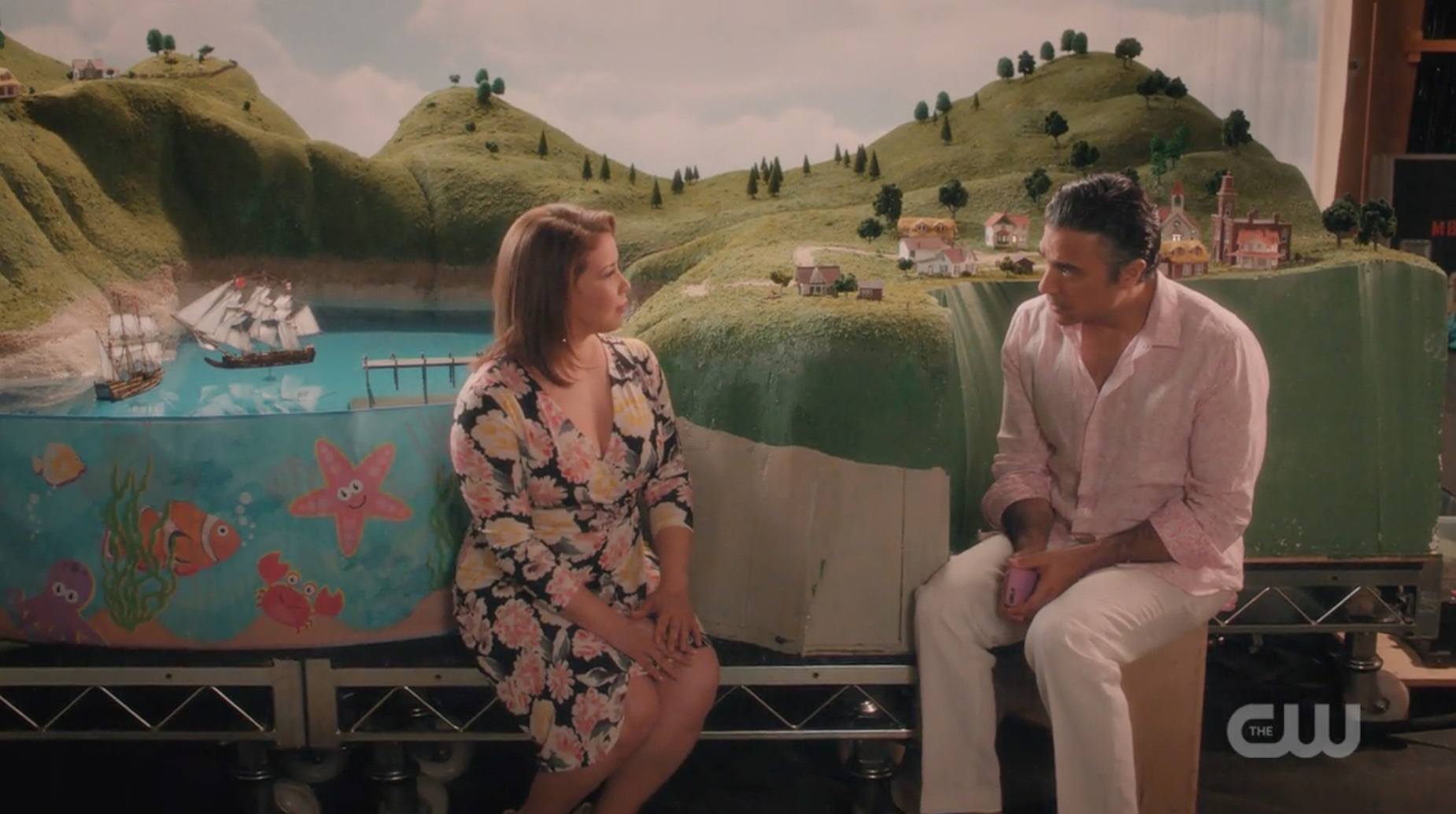 Alba wrote the date for her citizenship exam down in spanish (meaning the day goes in front of the month) and now it’s 6 days away instead of 2 months away. They would push it but with “Immigration laws changing so rapidly” she can’t push it. You see how they did that – it’s true.. So terribly true.

With Alba as caretaker we get to see her experience come into play, being passionate about her skills as a nurse and her desire to care for her child. Even sticking it to Jane. Alba has really been going through it with the stress of the upcoming citizenship test, the self appointed caretaker role, and the patient also being her daughter. It might be too much. THEN she sees Jorge at work, and he is being friendly, even so open to say he broke up with his ex girlfriend. Alba takes the leap and tells Jorge that she made a mistake, that she still loves him and wants to give them another chance. But, it’s too late, he feels something shut off when he was rejected by her “twice.” Jorge just doesn’t have those feelings anymore. 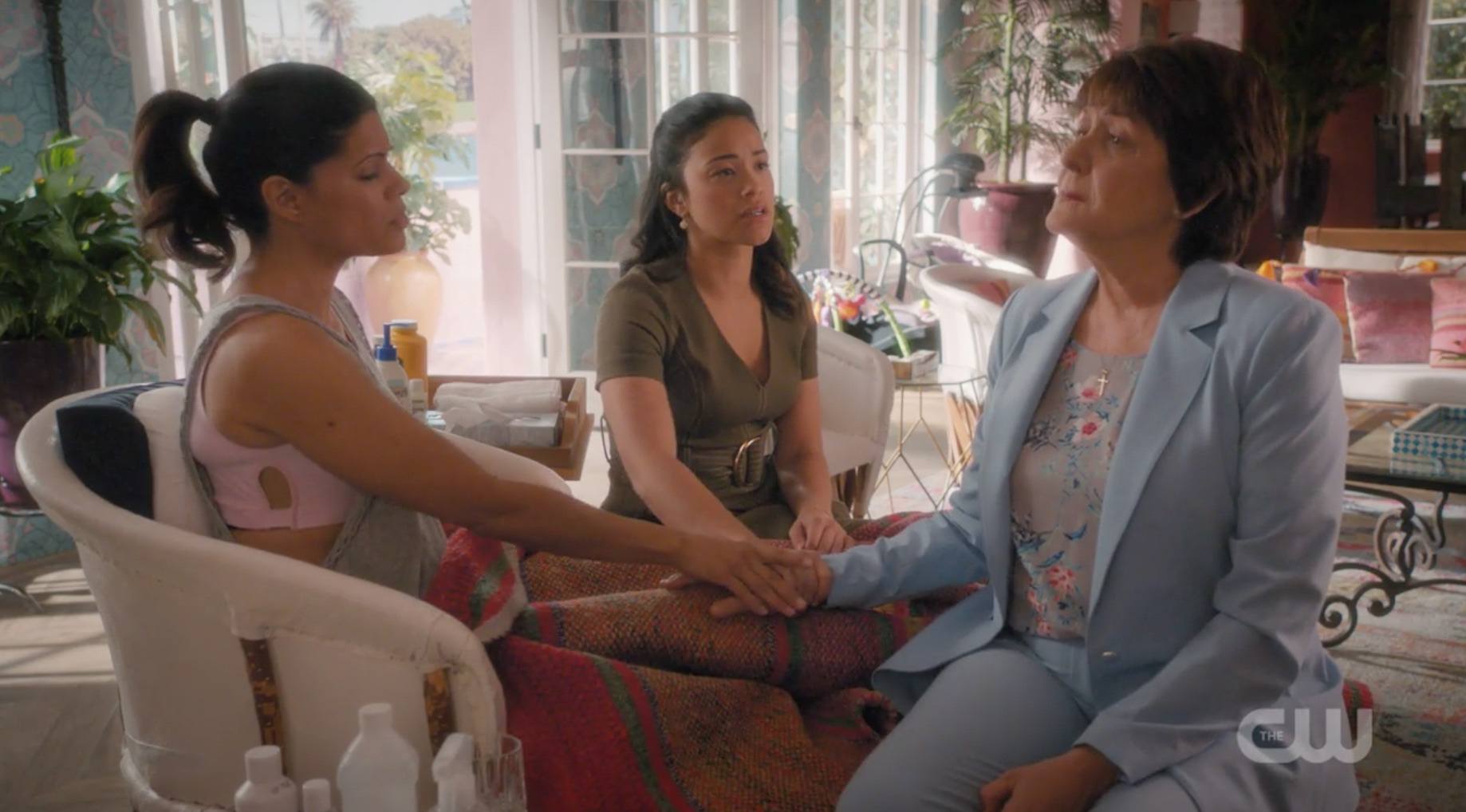 Xiomara is like, “I’m coming” cuz Alba just needs to focus on the test and not on anything else. They get there 2 minutes late and they won’t let her in. Xo assumes her position as the enforcer and was like F that I have F-ing Cancer (the proper time to use the cancer card) and was like let her the F in!

The show then gives Alba the Jane campy dream world animation treatment with American flag stars flying, statue of liberty congratulations and founding fathers posters clapping. It was way too much for the moment, I’m happy for her, but founding fathers clapping…I don’t know. It was cute to hear the political commentary while she was studying, wouldn’t be JTV without the commentary.

Last we saw, our dreams came true and Lawyer Jane and Petra are together. Unfortunately, she spent the night, not that she spent that night that is a win, but unfortunately, Rafael had ro bring the twins by early and Lawyer Jane met the kids by accident! And also looks disgusted then talks about how she doesn’t like kids – ummm well if you like Petra, you just acquired twins… 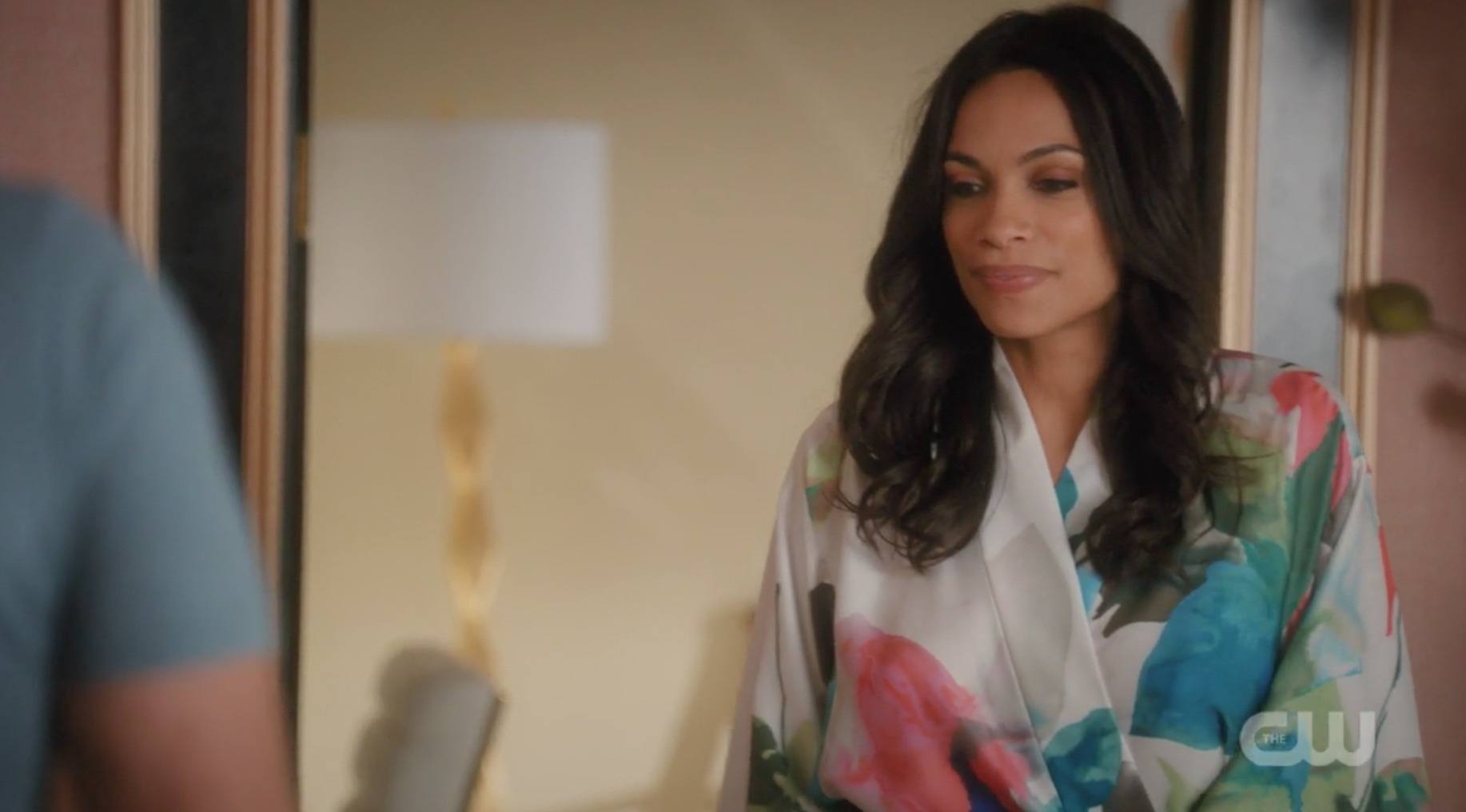 After that Rafael was offended by Lawyer Jane, as he should be. It seemed like if Petra and her were going to be together that she would just avoid his children at all costs, that’s a deal breaker for me. So Jane-Jane feels the whole family needs to meet as per their rule about partners meeting kids.

Petra is a jerk about it, and tells Rafael and Jane they aren’t allowed to talk about basically anything with Lawyer Jane. During the “double date, “ Lawyer Jane seems unenthused the entire time, and also just making out with Petra – it was very third or fourth wheelish. Afterwards Lawyer Jane and Petra are debriefing about the date and laughing and elating about how basic Jane is. I am so offended – Jane is anything but basic! (mad face emoji)

Petra does address Lawyer Jane’s disgust with children, she’s like “I have kids…” and Lawyer Jane is like, I don’t like kids and Petra says “I don’t like kids either,” it’s funny because it is true. Petra refers to her children as basically small adults – which is also…true. In being real, Lawyer Jane wasn’t ready to get to know Petra’s children, unless they were serious about being together. Petra was all in – she’s serious, so they are serious! We see Lawyer Jane having dinner with the kids, getting to know them and everything. She then gets a call, and it’s the D.A.’s office. Lawyer Jane says, probably to officially dismiss the case. But – NOPE! They actually got a confession from someone who was in the room, that Petra murdered Aneshka, that it was not self defense. Guess who – yup! Petra’s mother. I cannot! There is no way she can prove this. Welp back to business I guess. 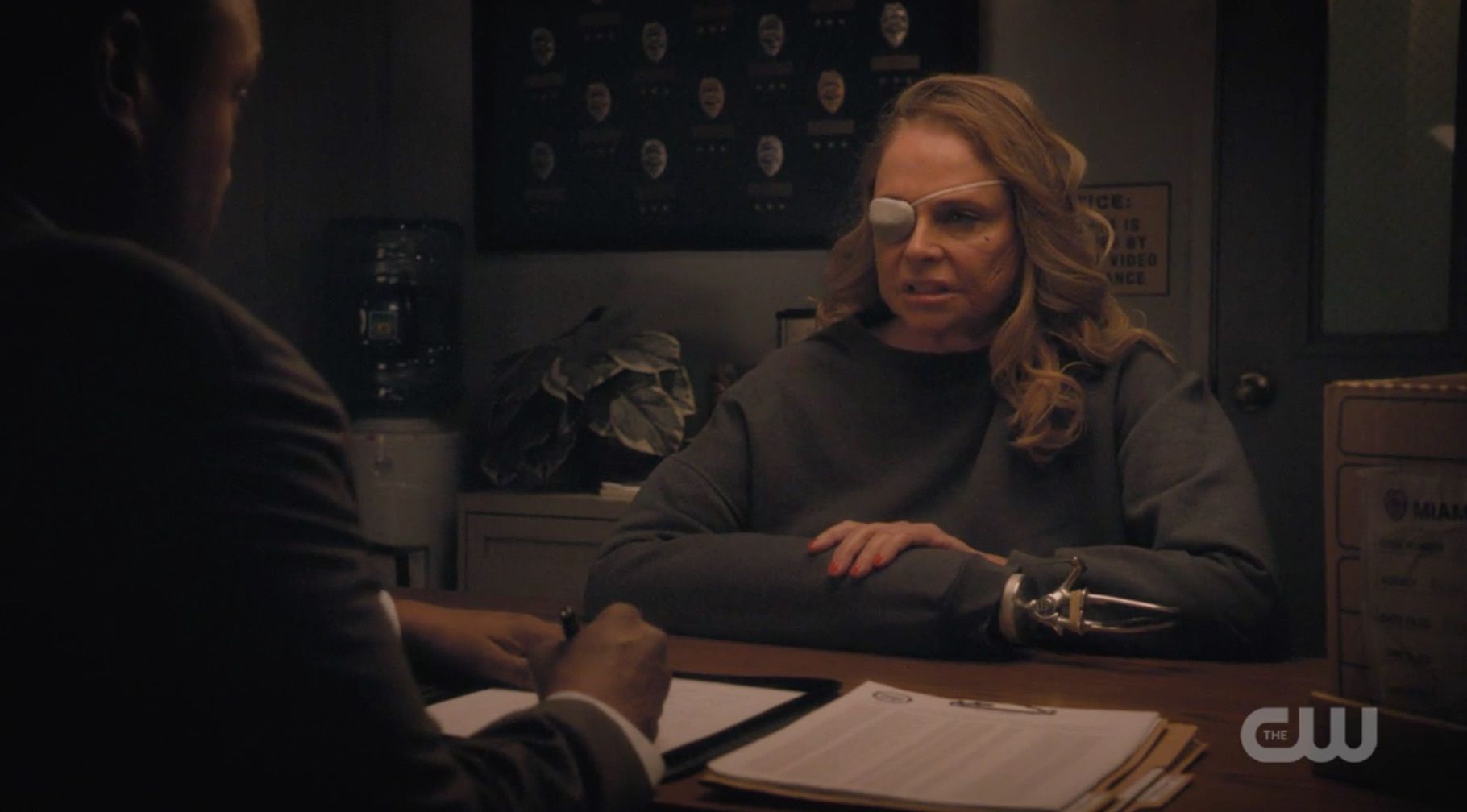 Rafael is doing daddy, and partner duty / working man life with flying colors. He gets Jane a drawer at his place, it’s small but working out fine. Jane said I love you, he said it back – apparently no big deal, they said it like married couples do leaving in the morning. As readers may know, this means nothing to me…they love each other – makes sense.

After the weird Lawyer Jane double date – he decorated his apartment to commemorate the I Love you milestone between him and Jane-Jane, and they had sex, I mean of course! After that Jane got the writing bug and goes to jot down a couple pages. In the morning, she stuffs her full drawer (hmm maybe a dresser is needed) and runs out. Rafael gets a glimpse at the papers and immediately looks bothered. Apparently, Jane had written about Michael. In the moment and after, Rafael felt like, maybe he is still second best. This doesn’t apply, Michael is gone, Rafael can’t be second. Even Jane was at a loss for words, I mean she’s the widow here… But he acknowledges he feels terrible for even saying it, but couldn’t ignore the feeling. Jane says, it was the anniversary of Michael’s death – oh dang! They have a serious talk in the end about his feelings, that they are valid and at the same time Jane was dealing with this new stage in her life. Rafael wants to do something for Jane and buys her a desk at his place. Letting her know, she has a place with him to write about whatever she chooses. As much as I am not impressed about them being together, they really are making a good team. 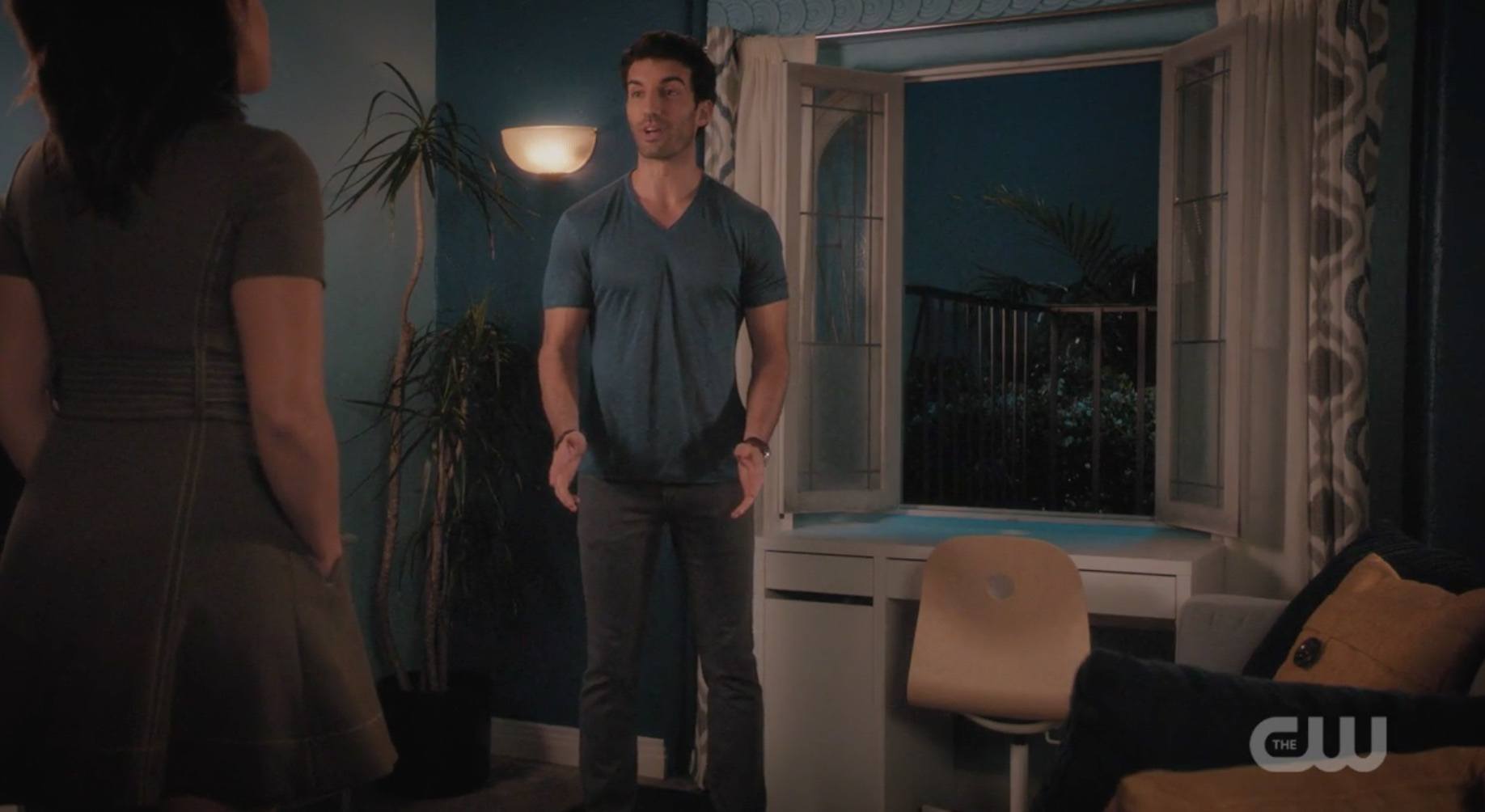 After the nonchalant regular ABC family I love you moment, Jane heads back to her mom’s place to keep researching and being there for her. Now the research is a bit much, but I get it. She begins talking about BPA in plastic water bottles, and what not. To be fair, it’s better to be safe, so I’d drink out of a glass and not a bottle. Legit, I only drink out of glass jars (wow that sounded so bougie) anyways, this isn’t about me. Jane’s research skills get directed right to Alba helping to make cue cards for studying. Since Alba doesn’t want Xo to know about the citizenship test – it’s all just awkward until they air out the polite secrets. After that, Jane is in her element, and Alba is acing these cue cards and Xo – is resting. 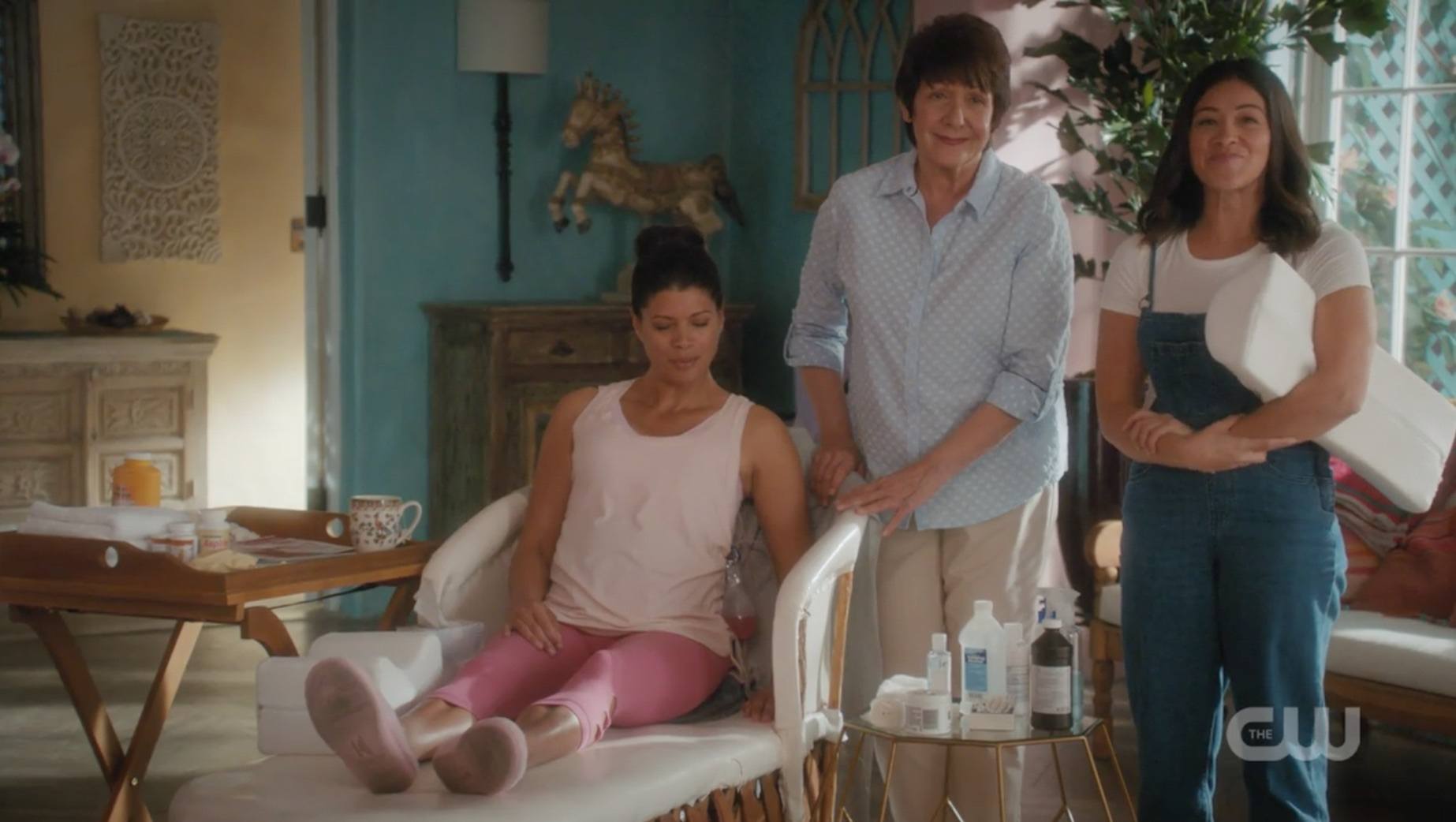 Once Jane hears that Lawyer Jane accidently met the twins she uses it as leverage to have a double date. Ulterior motive, Jane just wants to get in on the romantic drama between the two and has so many questions. The problem is that, her questions would all touch on the Petra prohibited topics.

You know Jane, she gets all awkward with boundaries and new people so all she did was try to bring up conversation that was not the mountain of things they weren’t allowed to talk about and then Lawyer Jane was like wtf – and of course didn’t like her. 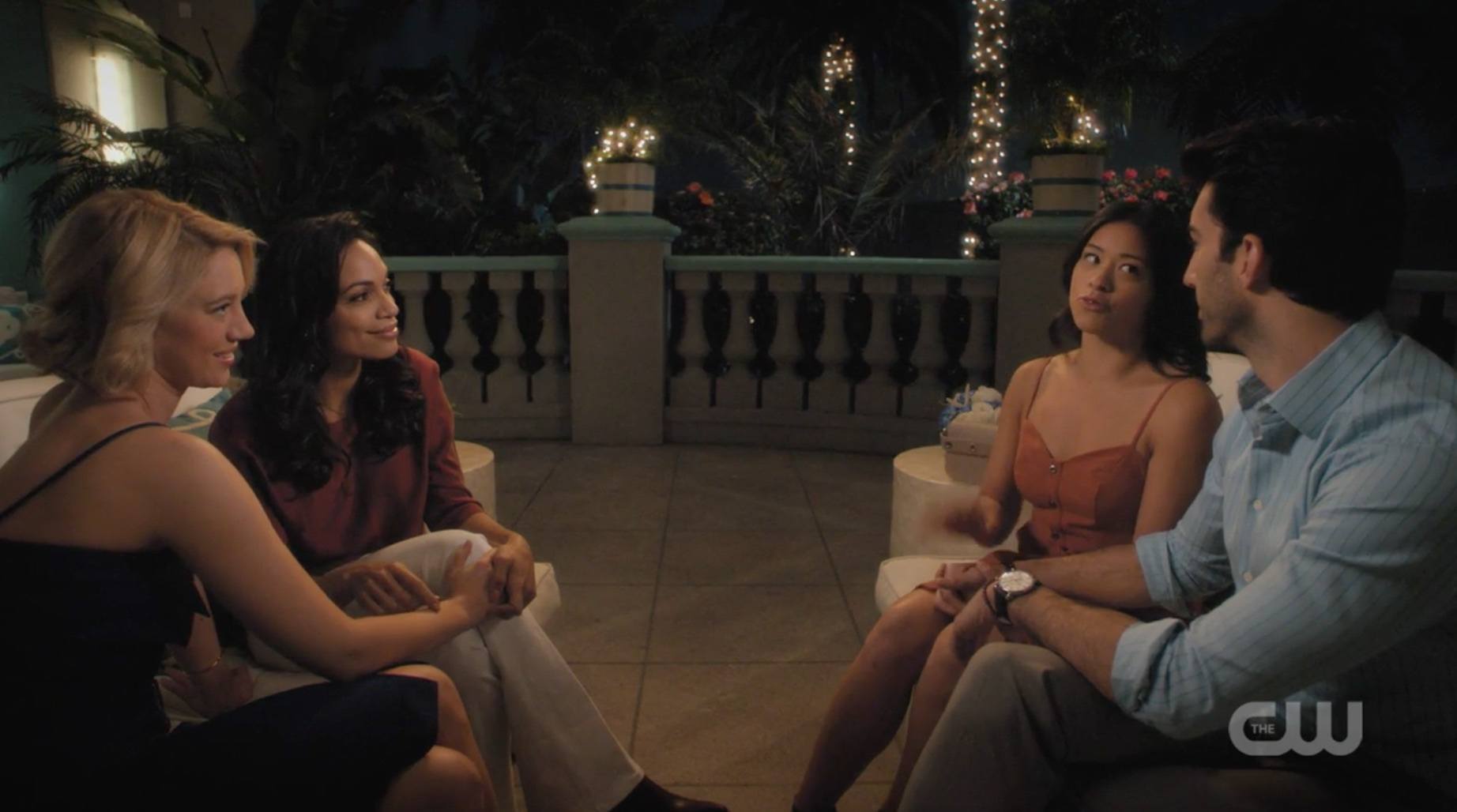 Jane knew this and was justifiably upset – but not in the way you think she would be. Generally it seems like Jane wants to be liked, but in reality she just wants what is best for the group dynamics and the way Petra feels about Lawyer Jane is definitely affecting the group. It’s almost like Petra wants to impress Lawyer Jane and starts treating Jane and their family activities as non priority or useless almost. So… Jane corners Lawyer Jane in the elevator awkwardly, but makes an honest effort to address the issue of getting along. Jane-Jane expresses that Petra matters to her, and her family matters to her, so she will try her best with Lawyer Jane because she knows how serious this is. I guess Lawyer Jane was the only one who didn’t know how serious Petra was taking their relationship.

On the same serious note, Jane speaks with Rafael about her recent pages on Michael. She says this was the first year she forgot it was the anniversary of Michael’s death. You pause for a second like, is that disrespectful? – but in reality she was focused on her partner, her life, her mom, her abuela and that is an important step in healing and moving on. She makes a big decision and asks to move in with Rafael. Wow – there you are team Rafael fans, it’s happening. But for real, the teams are dissolved, there’s something new going on. It’s not about sides anymore. I guess – let’s see where this really goes. 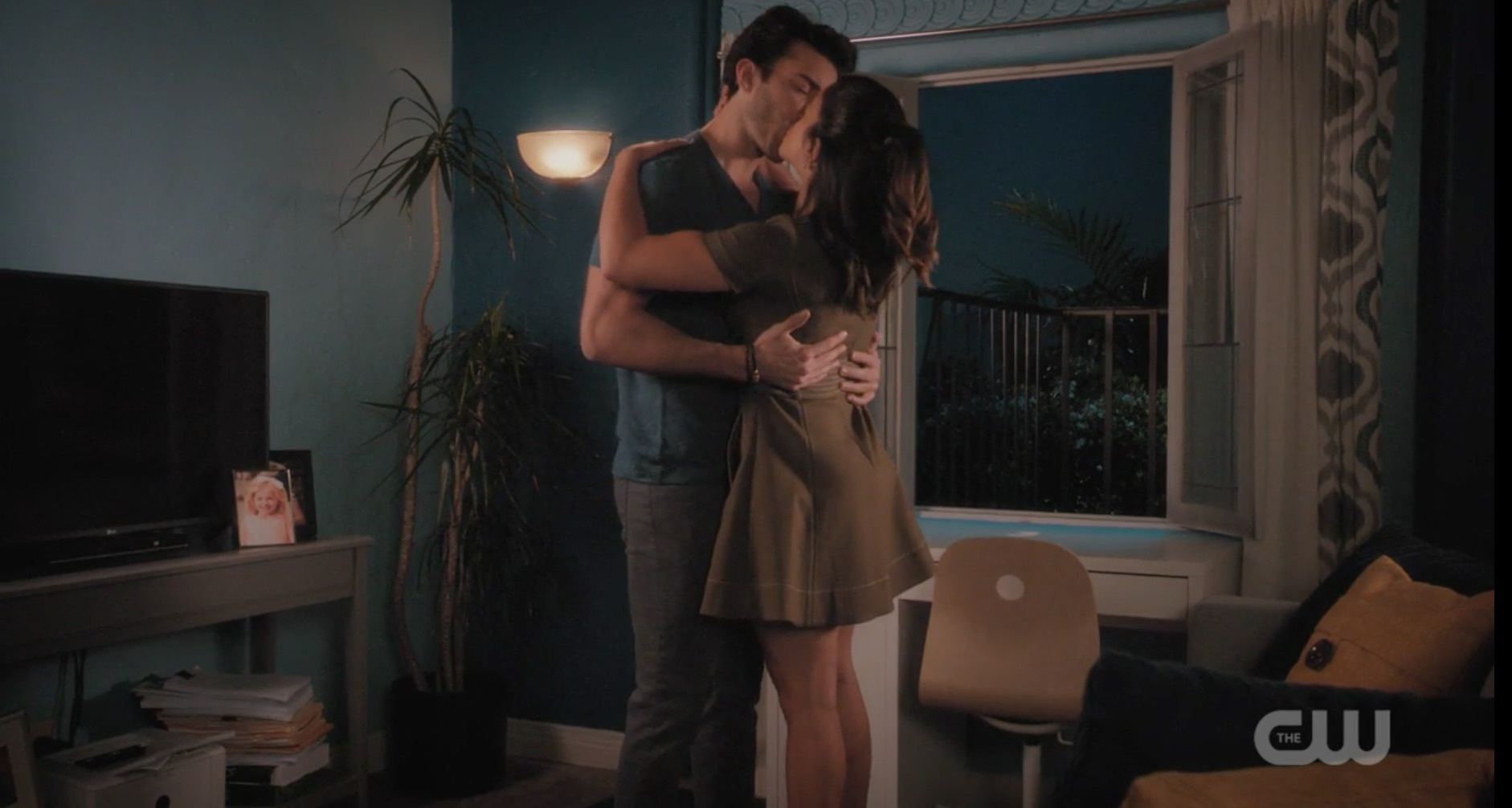 So new developments, new dramas – still murder and accusations of murder. Also – who was the mysterious figure walking up at the end of the last episode??

I guess we’ll find out! Catch us next time on Jane the evolved.