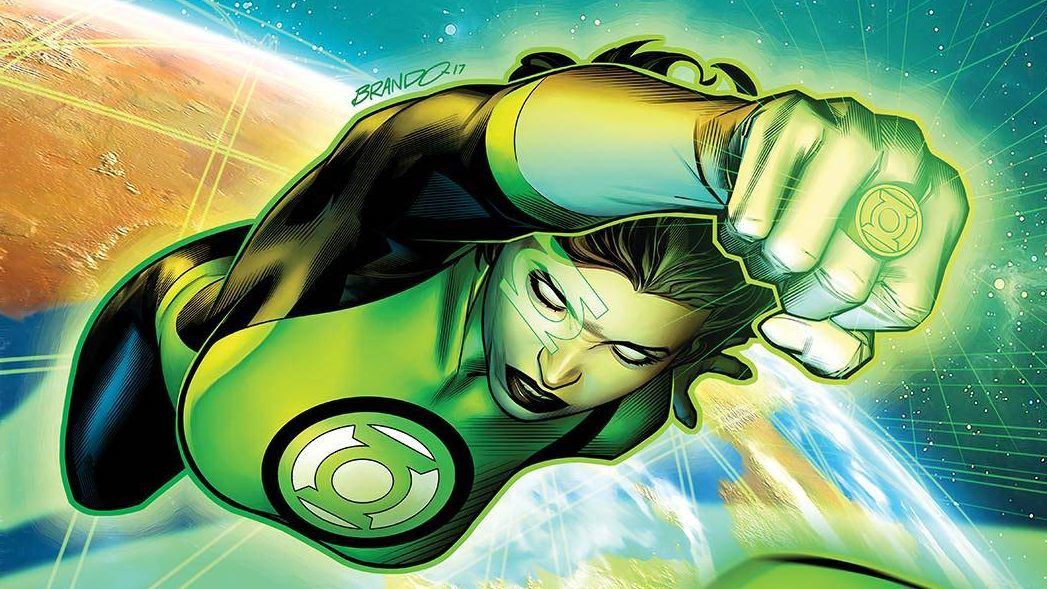 Talking to my girlfriend about Jessica Cruz inspired a frustrating search of my collection for “Forever Evil”. Not being able to find them threw me into a whiskey-fueled despair. I drank the same amount that I always do; I was just grumbling about wanting to read the crossover. But because I’m Mr. Silly-stupid-head the third, I didn’t think to check DC Universe. I just subscribed to check out the Harley Quinn cartoon and Behold! They had my baby!

Partially through this delightfully fun event, I planned to write an editorial on said “Forever Evil” arc. I was triggered, though, by my girlfriend’s friend remarking that Jessica Cruz’s backstory “wasn’t even that good”. Such insolence cannot be tolerated. I soon had an interesting series of revelations. “Forever Evil” does not actually have Jessica Cruz in it but the story is foundational to her origin. There are a lot of comics between this foundation and her willpower baptism as one of Sector 2814’s newest Green Lanterns. After a glorious binge of “Forever Evil” and Justice League (2011) #30-50, I am convinced that Cruz’s genesis deserves an ode.

Jessica Cruz gets her start as Power Ring, not Green Lantern. Harold Jordan is a member of the Crime Syndicate, an evil Justice League from an alternate reality. Opposite of this universe’s Hal Jordan, Power Ring is cripplingly cowardly. With all the power and none of the courage of a Lantern he reflexively attacks in fear of being attacked first and when faced with difficulty he runs. One of my favorite moments of “Forever Evil” involves Batman fighting him with a mostly drained yellow ring of fear. Power Ring destroys the yellow ring but not before it catches the attention of Sinestro, who pursues and eventually dispatches him. Unlike a green lantern ring that responds to the strong willpower of the user, the power ring holds a sentient being that controls the bearer. 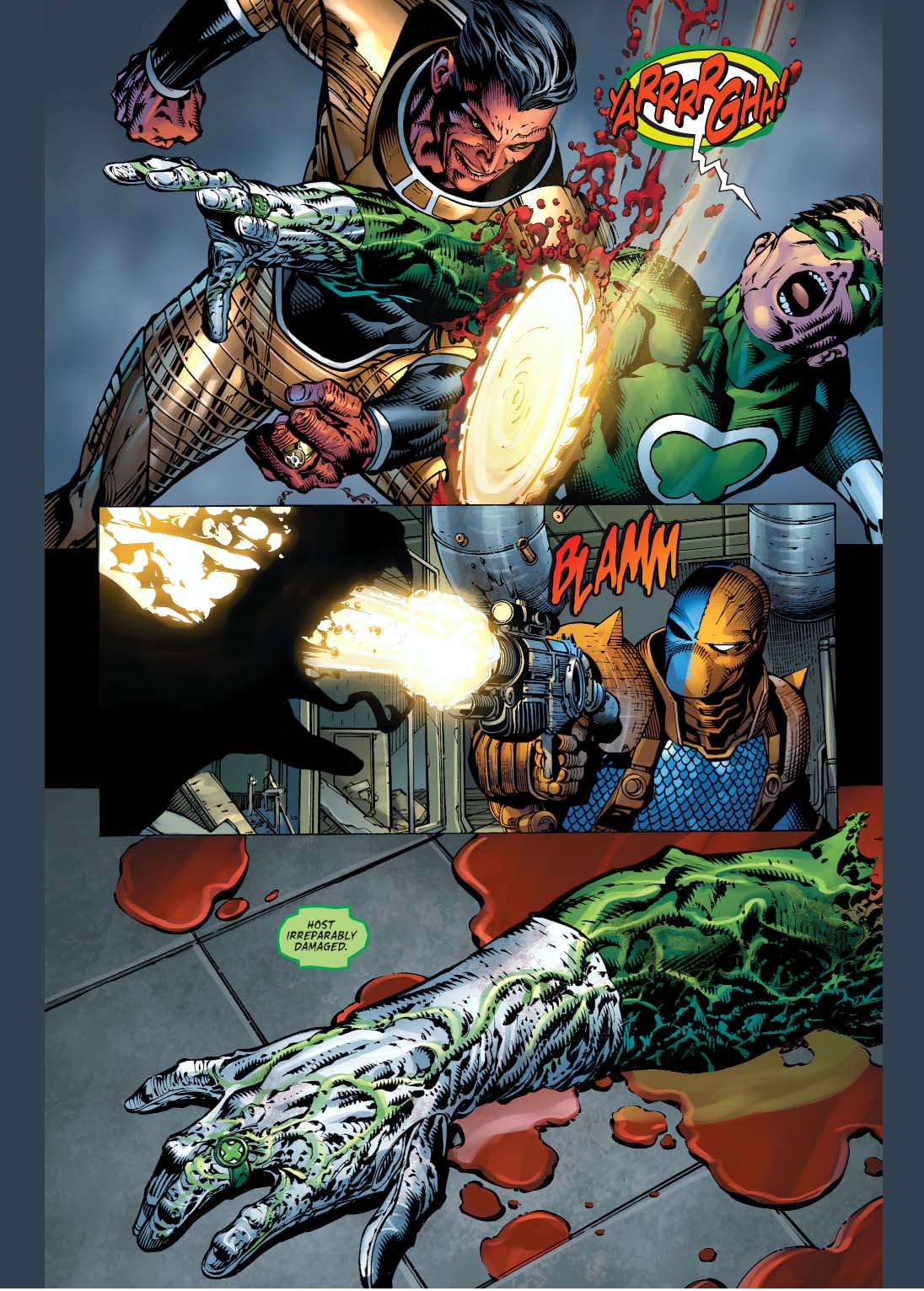 The entity inside the ring is later referred to as Volthoom. In the case of Jordan, Volthoom manipulates his host by playing on their fears and denigrating them. The effect appears telepathic to an extent. When Captain Cold freezes Power Ring’s hand it provides a temporary relief, quieting the ring. “Stop whining and fight, you freak!” is the last thing he tells Harold before Sinestro severs his arm, forcing Volthoom to find a new host. When Cruz is the new Power Ring, Volthoom eventually possesses and controls her completely. Examining the character of the former Power Ring gives insight into why it would choose Jessica Cruz at the end of Justice League #30.

The unlikely hero is not even a little bit new in comics. They are littered with stories of normal people with a virtuous spirit getting power thrust upon them by way of X-Genes, Spider bites, and radioactive explosions. 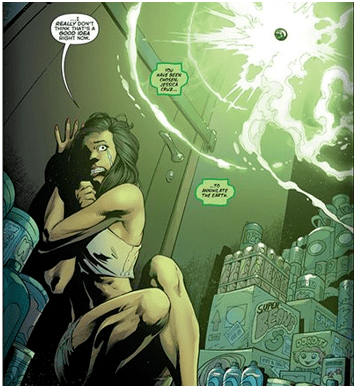 Less common are superheroes with disabilities, but there’s a fair share. One of my personal favorites is Daredevil, the Man Without Fear. The blind lawyer follows a common trend among these heroes; the power they receive almost always compensates for their disability. Who needs to see when they have a 360-degree radar sense? Not being able to walk doesn’t matter too much when you can control people’s minds.

More interesting are heroes with less visible conditions. Characters like Moon Knight and Legion have tenuous grasps on reality that make for plots where the readers are kept in a similar world of doubt about what is in the character’s head and what’s real. Multiple personality disorders, though, are too rare to be widely relatable and serve the story more than anything. Jessica Cruz is set apart from most in this camp because her condition simultaneously makes her the one of the most unlikely superheroes and one of the most relatable. 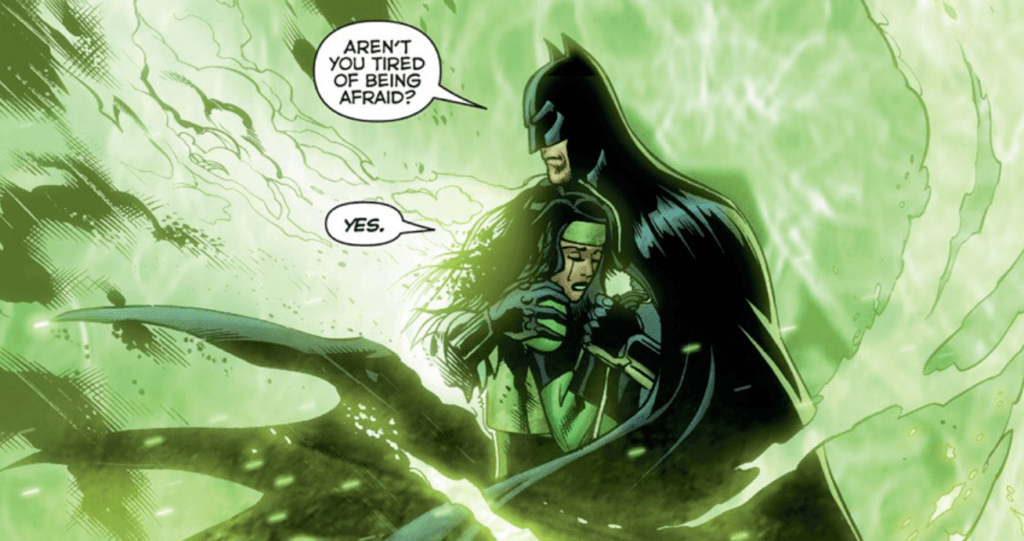 The Fear that Binds

Cruz has crippling anxiety and agoraphobia after being the lone survivor of an attack on her and her friends in the woods. It’s revealed in Justice League #30 and #31 that she hadn’t left her apartment in four years, terrified that the assailants were still out there looking for her. She even turned her family away during the “Forever Evil” attacks. In Volthoom’s words, “That fear attracted….” Volthoom uses Jessica’s fear to wreak havoc until she’s confronted by the Doom Patrol and then the Justice League. The Chief and Lex Luthor did not make the situation easier with their aggressively violent solutions that allowed Volthoom to utilize Cruz’s increased fear.

Eventually it is the god damn Batman who is able to inspire her to get her fear under control. She joins the Justice League as Power Ring, training with Flash and Hal Jordan. It’s important that her struggle with fear and anxiety doesn’t evaporate with Batman’s hug. She continues to fight and overcome these issues with Volthoom still whispering in her ear. Continuous struggle is more realistic, as anyone with anxiety will tell you.

It also needs to be emphasized that Jessica Cruz is LatinX and it is easy for a character of color to be defined by their ethnicity. Sometimes it seems like a creator is saying, “They’re brown. What else do you want from me?”. Cruz is an example of the truth that people of color are complex and multi-faceted; it’s a truth particularly appreciated on Black Nerd Problems.

Another unique thing about Cruz’s story is that she really has two origins and they are spread between a few arcs in the larger Justice League comic. I had a great time getting through them, despite the disproportionate focus on Lex Luthor’s wannabe hero ego trip. 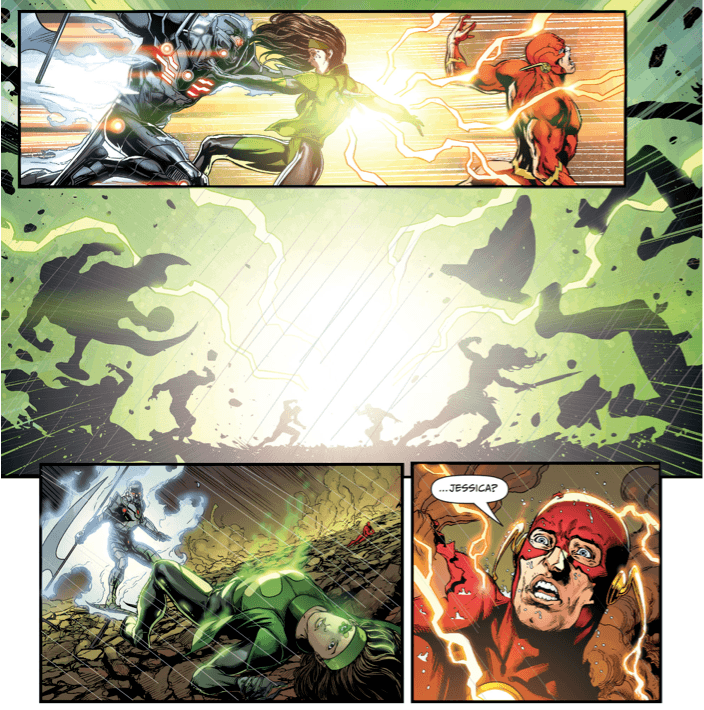 Amid this madness, Jessica Cruz’s story culminates to a legit Jesus moment. Hear me out. She is tempted and overcome by the evil Volthoom in the resurgence of the Crime Syndicate. At the last minute she regains control of herself just in time to put her body between Flash and the literal God of Death to save him. After the universe shattering battle ends and the League begins to mourn her death, a Green Lantern ring pulls a Trinity “You can’t be dead . . . Now get up”. Cruz is resurrected as our lord and sav . . . I mean a Green Lantern. The magic words, “Jessica Cruz of Earth. You have the ability to overcome great fear”, have particular resonance addressing someone like Cruz. 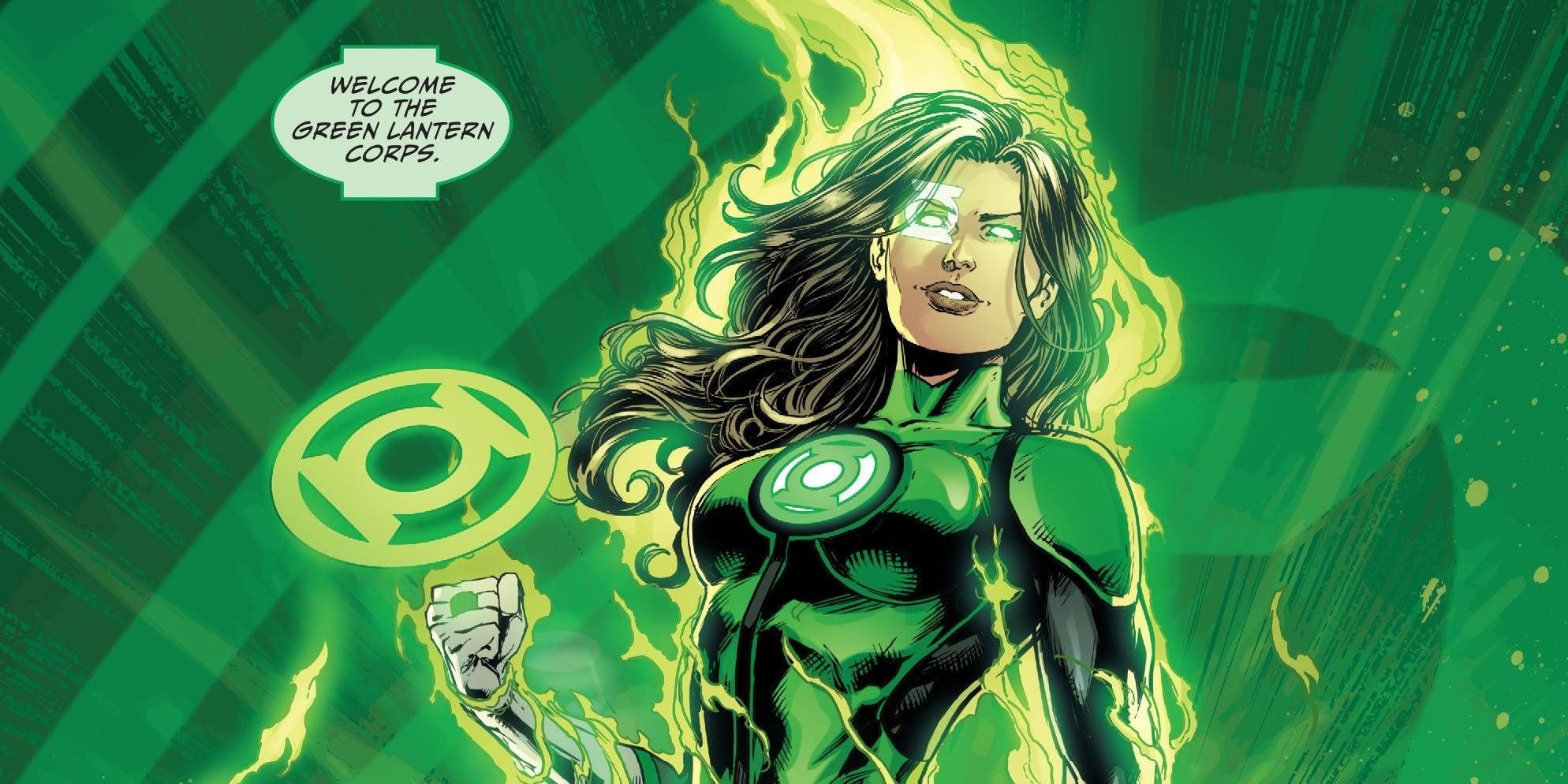 More than most heroes, Jessica is a testament to the strength within even those of us who are the most plagued with doubt and fear. Even after this epic moment, she continues to battle her anxiety as intensely as she battles Red Lanterns. With all this, I challenge my girlfriend’s friend to tell me that Jessica Cruz’s backstory “isn’t that good”.