After peforming his heroic homie duties in issue #2, Fitz is officially called up from the minors and throws this issue on his back. We start off in the boonies of some small Midwest town. The Flare is there putting the finishing touches on some puppet clown creation that Mark Millar has decided will be the next victim of the guaranteed-to-get-bodied monster club. He finishes up and sparks up a conversation with a beautiful young waitress named April Kelly. She offers him some post battle coffee and reveals to him that she is bored out of her mind living in a town that just had the most exciting moment in its history. That’s right. A giant It puppet ripping apart the town is the greatest thing that has ever happened to everyone she’s ever known. Anywho, Fitz is all, “Girl you young, go get yours!” She starts swooning and reveals her big secret of always wanting to be a superhero like The Union. Fitz is surprised and she gets embarrassed until he puts on the charm.

Thennnn shorty straight up hits the family man with a line that immediately raises a red flag. “My parents are out of town at a funeral in Minnesota…can I show you something crazy?” I genuinely believed she was bout to walk out and then back in with the Varsity Blues whipped cream seductress outfit. At least I came pretty close. She struts out of her closet in full hero costume, leading to the start of their adulterous relationship.

Fitz returns home after a long night of activity. His wife informs him the baby got up a few times because he’s probably got an ear infection. Fitz and Mrs. Fitz agree the baby should be brought to the doctor in the morning. She wishes him goodnight and says that she loves him as he lies awake in bed contemplating how big of a piece of shit he just became.

Flash forward a week or so and we see The Flare and April scoping out some guaranteed-to-get-bodied alleyway thugs. They spring into action and put the beats on the dem crooks. Next day they wind up on the front cover of the paper and The Flare and Miracle Girl are partners.

George money bags pays Fitz a visit and tries to talk some sense into his teammate but he’s hearing none of that noise. Fitz drops that old ass BS excuse that he feels the girl is doing his wife a favor by alleviating the burden he endures living with his beautiful family. April shows a slight bit of remorse when she says she hates being the bad guy shacking up with him while his wife is back home scrubbing floors. But with a smooth talker like Fitz consoling her and the girl living her dream of being a hero, how can you blame the teenager?

Then Fitz takes it too far and asks if she can join The Union. 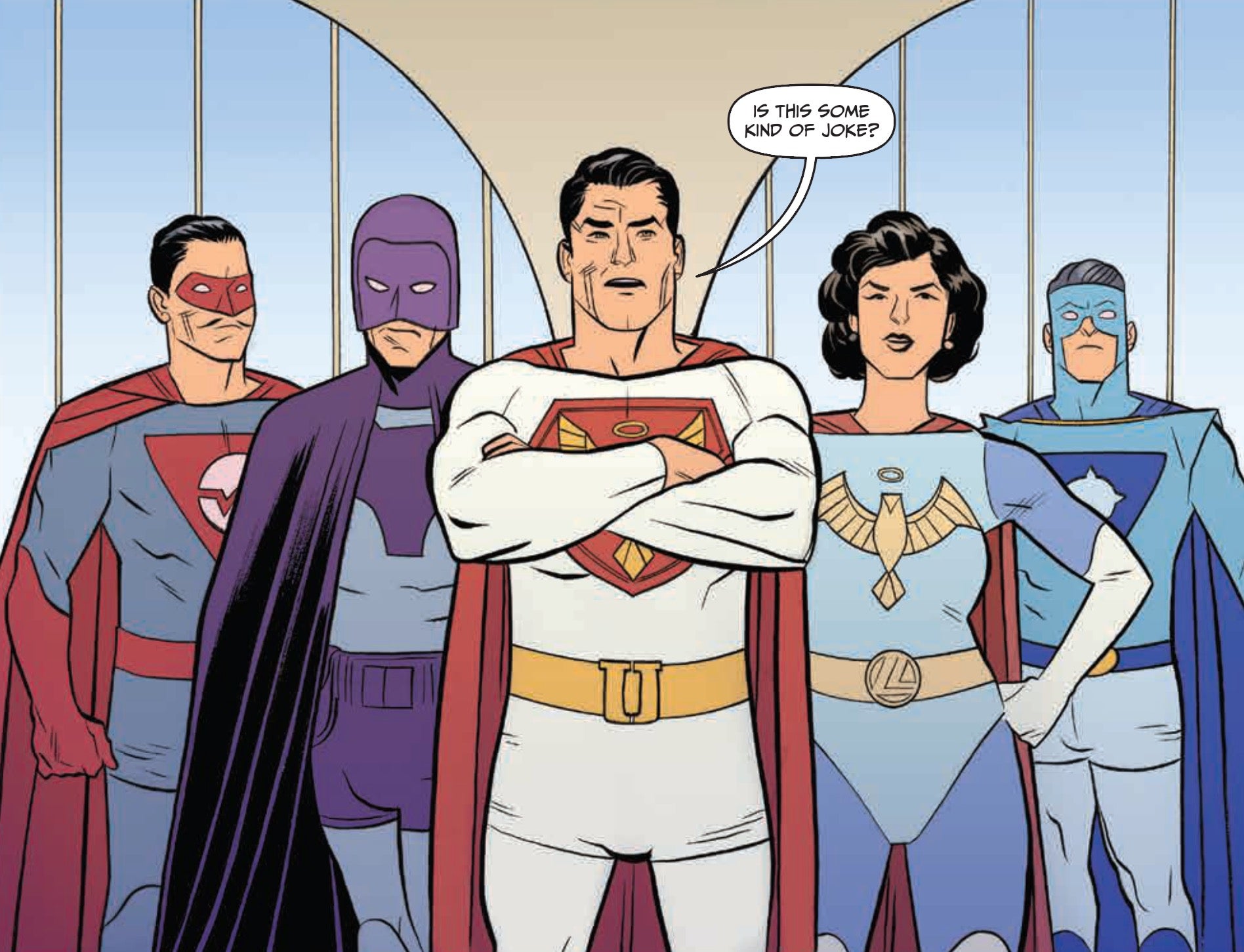 Squad: Bruh, you kidding me right this shit right now?
Fitz: What? She’s in love with me!
They then proceed to go innnnnnnnnnnnnnn
Squad: BRO, your wife is in love with you. She’s a 19 year old star struck girl who has no business joining a super powered team. Get a grip.
Fitz: Wait a second..
Squad: Na son, you making a fool of yourself and degrading your family.
Fitz: But..
Sheldon: End it you’re off the team.

Fitz sends her packing back to the Midwest and decides it’s time for a drink, which means some really bad decisions are about to be made. I’m pretty sure every time one of the superheroes in this series have had something to drink, horribly idiotic decisions follow, and this one is no different. The Flare is venting at the bar and allows the bartender to convince him that he might be making the mistake of his life by letting the girl go. Yay drunk advice!

He flies out of there and tracks down the bus she’s on. He tells her he has a proposal for her and flashes a rock all up in her face.

Fitz’s son has been silently brooding in all the family shots we’ve gotten this issue. News must have traveled fast because son is at the crib letting mom know everything is gonna be alright and that dad is gonna get what’s coming to him. The Little Revenge Rascals?

Overall, good issue that dove into an problem that has been plaguing our country for decades centuries ever. Adultery is a bitch man. Even superheroes succumb to it. The weak ones at least. Here’s to hoping someone can talk some sense into The Flare before his flame gets put out.