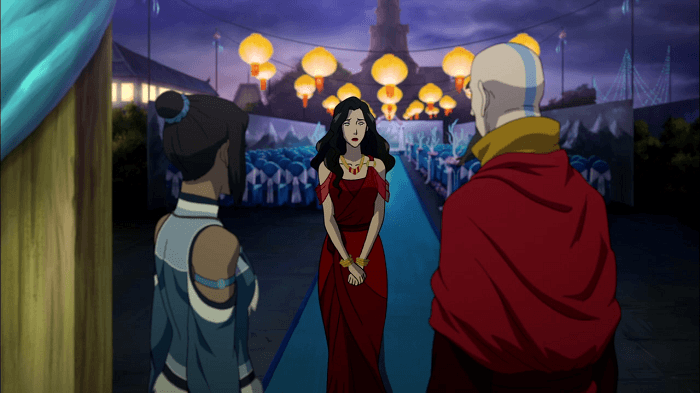 Team Avatar Red Team aka Gladys Night and the Siblings aka Team Fuck Yo Shit up is now all in Kuvira’s personal space. The Admiral gives everyone their marching orders and says that she is going to go after Kuvira herself. Suyin gives her the mom voice like, Honey Pie, you sure about that cuz last time…

And Korra hits her with the:

Mako and Bolin hit the engine room and open the hatch with Bolin’s lava Frisbee. They both go after the engineers and we see Mako get back to his Probending stance and starting giving this dude the Street Fighter Balrog combos.

Suyin and Lin ride the express cables up to the arm to disable the weapon, which is awesome but overkill, considering they got one dude doing maintenance on the weapon. I don’t want to rehash the private contractor monologue from Clerks about the dudes that died on the Death Star in Return of the Jedi, but I’m sayin, you could have better days then this dude. It’s a good chance it was supposed to be his day off and he wasn’t even supposed to be here. But instead, he out here throwing metal spitballs at Lin Da Gawd while she wielding the Baraka blades. Dude needs a union rep in the worst way.

Suyin pulls all the spirit vine shells off the rack like a toddler running through a toy store with their arms out and gets spirit vine juice EVERYWHERE. Lin joins Suyin after the explosion and decides to “take the arm” by tearing all the muscle and ligaments apart from the inside.

Kuvira knows that shit is getting sabotaged and tries to use the weapon, but she getting the dead arm because the Beifongs just went chi blocker on it. Then Kuvira goes Deadpool and decides to rip that muthafucka off because its useless to her. I mean, you could say that ripping off your own arm is a harsh reaction on her part…I just wouldn’t say it to Kuvira’s face. 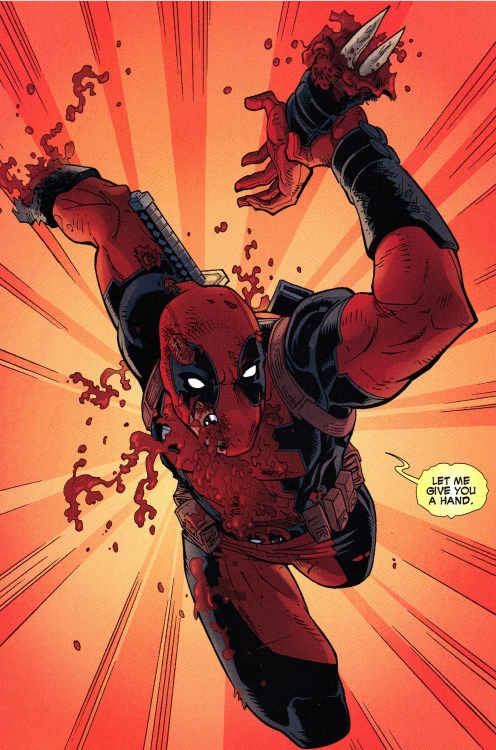 Lin and Suyin buckle their seatbelts for the uncoolest roller coaster ride ever as the arm goes crashing into a building with the cannon itself flying into the forest.

Y’all fux with Anton Checkov? He ring a bell? Oh, no reason, asking for a friend.

But that is the least of Kuvira’s problems because something is pounding on the metal hatch of the cockpit and she’s watched enough The Wire to know when Omar coming.

Korra metal bends the hatch open, jumps into the cockpit, then takes down the two engineers with firebending before she even lands on the ground. IT IS NOT A GAME, BENDERS.

Korra ain’t forgot how Kuvira was about to give her the death sentence for deserting the Night’s Watch during the first fight. Korra scores more hits on Cobra Kai Kuvira in the first 10 seconds of this fight then she did in the first one entirely.

Down in the engine room, Mako and Bolin are taking WAY TOO LONG to finish off these subcontractors. Mako finishes first while Bolin goes Tron with the Lava Disc on this opponent, immediately followed up by the Marshawn Lynch.

They pull the switches to turn off the engine, but there must be a failsafe in place because the shit is still on. Since they can’t find a way to turn it off, Mako has the solution. We call it the Zuko maneuver. He plans to use lightning to overload the power source and make it explode, but as Bolin points out multiple times, that sounds like a terrible idea. Then Bolin hits him with the…

It also felt like he was reminding the audience how dope Mako was back in Book One, but he ain’t been the same since he did the MLK jail time in Book Two. From here moving forward though, I’m placing an embargo on all Mako slander. Some were “disappointed” that this didn’t kill him, but the fact that he was willing to die to destroy the mech was enough for me.

Also, if you can’t feel that hug between him and Bolin before almost giving his life to the lightning, then you and I shop at different bodegas for our feels, yo.

Back in the cockpit, let’s be clear about something: Korra is putting the PAWS on Kuvira. This shit lookin’ like Tyson / Spinks. Kuvira is in a small room with nothing but metal and Korra is like, idc, idc, idc.

Kuvira taking that Agent Smith asswhuppin when Neo started seeing the code. Eventually, the engine room explodes (after Bolin rescues an unconscious Mako) and that torso gets ALL the gravity.

Korra helps Kuvira out the wreckage because Kuvira probably got about 4 broken ribs, but Korra got that Lara Croft indestructability. Korra tells Kuvira to surrender, but Kuvira’s armor is held together with metal and sore loser.

Korra chases Kuvira into the forest because she refuses to give up and starts taunting Korra to come find her. Korra makes it to the clearing where Kuvira is up on the Megatron, pointing right at her.

So, did y’all look up Anton Chekov yet and his significance to this scene? It’s cool, this is the internet, the recap ain’t goin’ anywhere. Kuvira can’t control the cannon and the whole city getting spirit vine juice on it. Kuvira falls down into the path and is about to be on that Erykah Badu shit and see us all Next Lifetime before Gawd Body Avatar Korra steps in front and stops the spirit vine bullet.

After the explosion, then implosion of all that spirit energy, it creates a new spirit portal right in the middle of Republic City. If Atlanta was really about being the Mecca, they’d install one of these right away.

The Earth Empire soldiers are searching for Kuvira while everybody else is looking for Korra, but ain’t nothing but a big ass Christmas display and a crater where they were last at. We finally see Kuvira and Korra on them spirit planes (shoutout to book two when Korra was unconscious, but Avatar Wan ain’t walking through that door). Kuvira asks if they’re dead and Korra says, “what, you mean like my future’s wife’s father ‘dead?’ You mean like that time you were about to decapitate me outside of Zaofu, ‘dead?’ Naw bitch, we ain’t that.”

Korra explains empathy and compassion to Kuvira when saying why she saved her, which is fresh to Korra because she just now learned this shit. Kuvira felt like she had to step up because nobody else would (true). But like Marge Schott…a woman who once owned a Major League Baseball team with a ton of minority players on it…once said about Hitler “they just went a little too far” (true story). Which I suppose is like saying a woman with quintuplets on the way is a little pregnant.

Everybody is waiting outside of the spirit portal when the spirits come back, which would be cool if those muthafuckas didn’t walk out on the check four episodes ago. Finally, Korra and Kuvira come walking out of the portal and you can tell everybody is excited except for Asami who really wants to be like, “The fuck were y’all doing all this time in the spirit world alone?!?!” but she knows this ain’t the time or place for that. Kuvira interrupts the Earth Empire mechs by saying, “I’m gonna let y’all finish, but Avatar Korra is the most powerful Avatar I’ve ever seen.” She immediately gets taken into custody by the Beifongs and Suyin rolls up on her side like when ma dukes gotta come pick you up from school because you did some stupid shit during lunch. (I was going to say when mom comes and picks you up from the corner store because you were caught shoplifting, but since Kuvira is a woman of color and that shit is now considered a death sentence in America, I would have had a hard time explaining why Lin didn’t put a metal cable through Kuvira’s head on sight for some folks).

Then, you’re free to get all the feels off of this group hug…

Of course Bolin is doing the Zhu Li / Varrick Wedding, of course he is. After Zhu Li does the thing and dips Varrick for the kiss, everybody is having a good time. Well, Lin is eating, but its impossible to tell if she’s having a good time or not.

Mako, who almost lost his arm Giant Mech style is talking to Prince Wu when Avatar Korra rockin’ the “She is Your Queen to Be” unlockable character rolls up. Wu says he may dissolve the monarchy, because the people should elect their own leaders and this pop album is not going to produce itself. Then it was Mako and Korra time…

Here’s the deal, this was an excellent scene. A tender moment between Avatar Korra and Mako as they both express their bond and unwavering friendship. It was perfect for a resolution to their relationship… But the homophobes and the MaKorra shippers are having a rough time. Look at this shit right here —>> LOOK AT IT! I’m sorry your ship not only didn’t come in, but took a wrong turn at Albuquerque and crashed into a muthafuckin’ lighthouse. Your ship sitting at the bottom of the Atlantic Ocean in Assassin’s Creed 4: Black Flag, fam. That ship caught cannon fire ever since Asami offered to teach Korra how to drive and gave her the hair flip. NOBODY CAN RESIST THE HAIR FLIP. Stay mad, yo. Homophobe tears only make us stronger.

Korra sitting alone looking at her brand new spirit portal when Tenzin rolls up singing her praises. He tells her that she has accomplished more in a few years than most Avatars accomplished during their whole lifetime (THANK YOU TENZIN, WE BEEN SCREAMING THIS, YO. Y’all better let the Gawd Live!). Asami comes over to sit with Korra a little while longer as Korra points to the spirit portal and says, “Look, I made you something for the Holidays.”

Korra apologizes for being gone so long and Asami tells her that the new haircut was worth the wait. I don’t know how Sato Industries handles Paid Leave, but I don’t think anybody gonna argue that these two need a vacation. Together. Alone. You gotta specify this shit cuz you know Bolin would’ve been like, “Ooh, I always wanted to go trekking across the spirit world, when y’all leaving?”

The next ya’ll already know and don’t need me to blow up the moment. I don’t even have jokes yo, I just know that two of my favorite characters on television that happen to be women are holding hands and literally walking into infinity on a TY-7 show and the shit almost made my heart bust. These cats executed a great love story over two seasons at a perfect pace and a perfect ending to a show that will go down in history for its quality and significance. Most people want to see folks walk off into the sunset, these women literally walked off into the light together. And I don’t know a better way to end a recap than that.