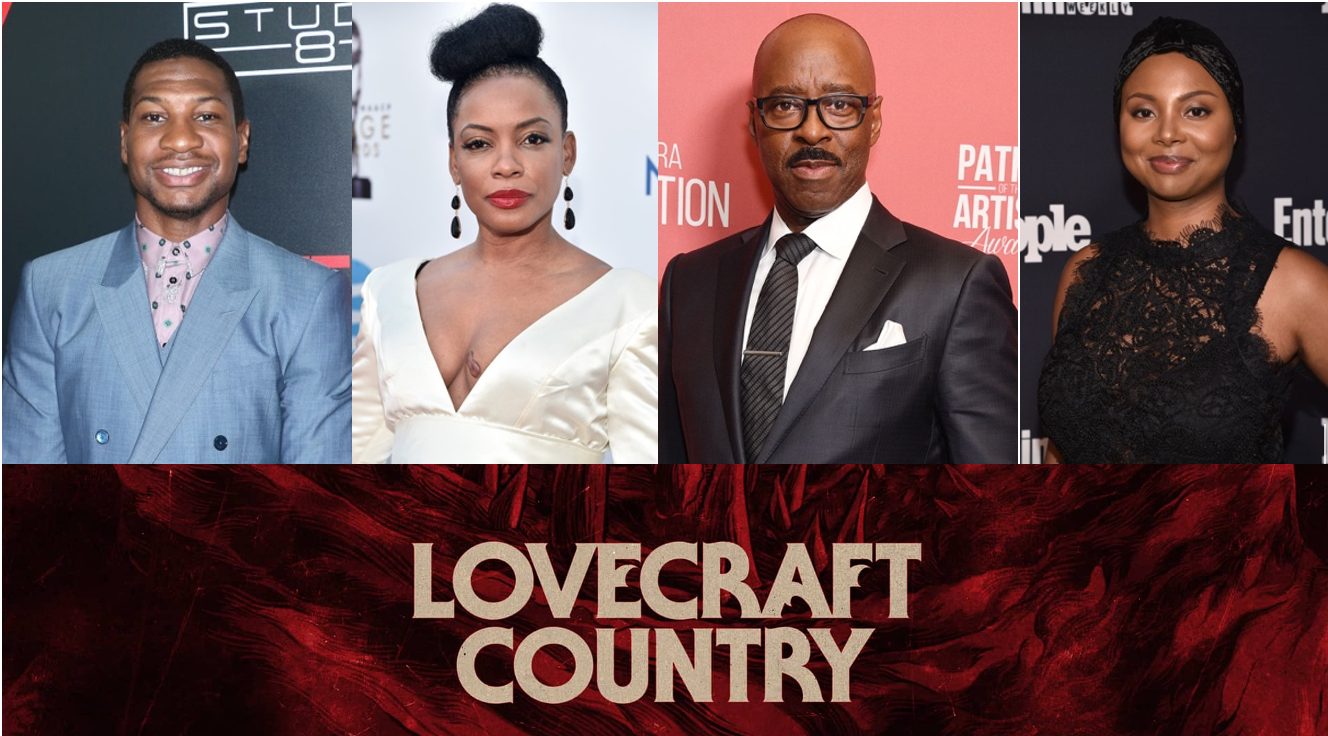 Just two episodes have aired from the first season of Lovecraft Country, and I know we all cannot stop dreaming about it. It has stirred conversations and excited a many Blerd who has waited generations to see a Sci-Fi show for us by us. It’s only the beginning and the performances alone have floored us. Just wait there is so much more to come! I had the unbelievable opportunity to speak to the full cast and creator Misha Green. Don’t worry we will not spoil upcoming episodes, so we’ll start with the non-spoiler interviews.

The day of interviews was expertly orchestrated; journalists were filtered in and out of Zoom rooms eager to connect with these phenomenal actors and creators. After a short wait, we are ushered (digitally) into the Zoom room with Jonathan Majors who plays our main character, Atticus Freeman.

As soon as we enter Jonathan exclimates “Ooo! Sisters!”

A room full of Black and brown women journalists was not something Jonathan wanted to go unnoticed. As we begin Jonathan looks excited and ready to dive in.

Black Nerd Problems: Something that I found really refreshing was that a lot of the characters had so much layers and nuance. Being characters of color, being Black people often times you are there to serve a certain type of representation. This time it felt so human so many levels. Atticus is kind of like a character, a Black person you don’t see often like a Blerd like myself. Can you talk about the nuances of the character that excited you the most in playing Atticus?

Jonathan Majors: The beautiful thing is that we have a hero right, who’s an introvert, right? We have a hero who is an escapist right? There’s a huge juxtaposition in that right? We have a fella who has already…when we meet him…already gone through the big transition–Who we are at home and who we are now when we return home–right. So, he goes from in my opinion, from Tic to Atticus right. When he’s at war he’s Atticus, he’s private Freeman, When I’m in Florida, I’m Atticus you know what I’m sayin’, and the nuance and the layers to him that I was most interested in exploring were that of his intellect. I mean Atticus has a body, he is a very well-bodied young man. And he can use it, but he only uses it – he uses it intelligently, he uses it in order to achieve what he needs to achieve.

And his wants and his desires are based off of his heart and his imagination not his body, and I think that is something we do not see very often in cinema, in films. You know that he is so connected to his heart and so connected to his mind that his body’s almost secondary, tertiary actually, in the case. And honesty, like for me, it’s like to expand the culture. Let’s expand our culture. Let’s just expand. We’re expanding sci-fi. we’re expanding genre. Let’s expand the idea of a protagonist. Let’s expand the idea of a Black man that he can (snaps quickly) be all these things.

The beautiful thing about Atticus is that he contains multitudes, right…and if one then all. As Atticus contains multitudes we then can say oh yea, so does Leti, so does uncle George, so does so and so, so does uh Frederick down the block from me, so does Quincy who I call everyday, so do all my… (he laughs) I said homeboys. So do all my homeboys and friends. We contain multitudes, you know. Yea, that’s what I was most interested to share and to unpack.

BNP: My question is about the sci-fi elements to it and kind of your relation to sci-fi and horror and fantasy. Was that something you had experience in and were excited about, or was that new to you?

JM: I guess it’s like this for me. I’ve always been into Stephen King and then like societal science fiction which I would say George Orwell like that, Ray Bradbury. All those things that you know they make you read in English class in high school and shit like that, you know what I mean. But I dug that I was ahead of that, you know. My father is a trekkie – you know.

JM: You know what I mean (he smiles), there was all that, so that’s all received. And then things I went out and got were like the thoughts and ideas of Edgar Allen Poe you know…like new drama school you know and that of Edgar Burroughs was another thing. I was like I didn’t realize I liked.  Like the Red Planet Chronicles, I read those like low key by myself, not prompted. I was like this is cool, which was very dope when Princess of Mars was the first book that is brought up to the audience that Atticus is reading.

I mean I can run through it now. Reanimator…specifically Lovecraft, you know, all that jazz which is fascinating. His mythos was quite impeccable you know what I’m saying. The kind of things he put into the world. Unfortunately, it was a little F-d up. The source it came from is a bit F-d up, all do respect. Our founding fathers built this amazing country, amazing country I love, there’s just some elements of it that deal with me, deal with us (right) that are pretty F-d up you know what I mean. And those things have to be reprimanded and changed and shifted – shout out to Kamala Harris (he laughs).

Before entering the room, I am looking over questions trying to find what could spark intriguing and inspiring conversation for actors with a such a robust roster as Courtney B Vance and Aunjaune Ellis. You only get one shot and of course you want it to be good.

At the entrance into the interview…

AE: Yes, I said it sounds like my life – black nerd problems

AE: Nice to meet you

BNP: Nice to meet you too

“First of all, it’s a big finger to the history and legacy of H.P. Lovecraft, I am excited about that.”

The interview begins and Courtney B. Vance addresses each question with ease and poise, Aunjanue spirited and excited. Seeing Aunjanue dressed in all white on what seems to be a veranda in the sunlight, you’re captivated from the start. As the interview moves on and technical issues make themselves known – as one might expect in a digital interview, the clock ticks and we are out of time…

AE: Wait, did the young lady from Black Nerd Problems, did she get to ask her question?

The event organizers explain if it is short one more question can be squeezed in.

CBV: I was drawn to it by working with people like Aunjanue and specifically working with Misha Green and the story, all the rest of it was just being in the room where it happened, I was just glad to be. It was Misha, and I said, “Misha, who’s in it?” She told me, and I said I’m in. A lot of times you just have to go on faith and trust that the person. I know I’m not gon’ get in any trouble If I’m with Misha or Anthony Hemmingway or people like that and Jordan Peele was a part of it, of course, and JJ Abrams, so thank you Ms. Blerdy Nerdy for the great question.

As the last interview of the day, we wait anxious with so many questions, but we only get one. I ask myself how can I ask like – three questions on one? We wait to be admitted into the Zoom room with Ms Green. We all appear in our Brady Bunch Zoom squares. Misha is calm cool collected and literally just chillin.

MG: Oooh masterpiece (she laughs). Coming to it, I was in the middle of Underground season two, and so my head was so there and not here at all. And they were like this book is amazing though you need to take a look at it, and I looked at the cover and I was like, “oh that’s an interesting cover.” I’m intrigued. I read the first chapter I was like sure let’s go for it. Horror, Black people done in half a second. And then getting into the process once Underground wasn’t coming back and it was clear to me Lovecraft Country was going to be my next thing, it was about settling into it. I was like I know what I want to do. I want to reclaim the genre. I want to do mystery. I wanna to sci-fi. I want to do horror. I want to do all those things. That’s the big epic thing, but it has to mean something. So, what is it?

And what I found –  oh at the end of the day this is just a family drama. This is about this family, their secrets, their shame, and how do they push past those – exercise those things to come together to reclaim their power. It’s that layer underneath the metaphor of all genre and the stuff that I was like ok got it. Then, it became super easy to write it at that point, because it was just about you know going to therapy and excavating all my bullshit with my family.

Leaving the interviews you can’t help but feel inspired, wanting to share your own gifts with the world. Thinking on the impact of the writing and the performances talking with the talented individuals got you feeling so proud to be Blerd. Next up, Michael K Williams, Junree Smollett, and Abbey Lee and Wunmi Mosaku talk racial conversations across the table.

Keep watching Lovecraft Country airing Sundays on HBO and HBOMax, then catch the next set of roundtable interviews right here at Black Nerd Problems to get a glimpse into the casts’ journey and experiences on set.

Want to find other Lovecraft Country reviews? Find BNP’s other reviews and coverage of the series here.