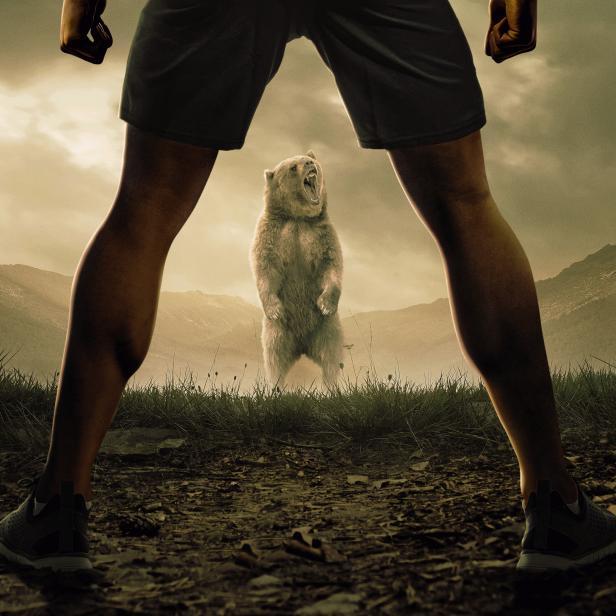 Here’s a fun game I learned from my guy Ken Arkind for when you’re on a date and need an ice breaker. Ask the person you’re on a date with what animal they’d want to punch in the nose and why. This shows you two things about the person, if they’re unwilling to engage you can gauge where their sense of humor is at. If they do choose to engage, then you know they have a sense of humor and can be spontaneous or silly right there with you.

Never did I think Discovery would actually dedicate a show to people squaring up with animals. Alright, well people aren’t going to be punching animals in the nose but for the new show Man Vs Bear is giving contestants the chance to go one on with a grizzly bear American Gladiators style. I know what you’re thinking. “Does Discovery hold the record for most shows with a waiver?” Yes.

Man Vs Bear: A Pay-Per-View Dream

Check it. Man Vs Bear is basically American Gladiators… but with freaking grizzly bears. In each episode, three contestants will compete against three bears: Bart (the strongest), Honey Bump (the Fastest), and Tank (the smartest/ hungriest). They’ll be competing on the bears home turf, Bear Mountain. The competitors will face off against the bears doing challenges that the bears do on a day to day basis. This includes tug of war, an eating contest, an obstacle course, test of strength, and a final challenge where they square up with a bear from the confines of a steel caged ball. Which sounds safe but… it mos def is not. I mean you’re gettin’ in the face of a grizzly bear in a push and pull match. Somebody gots to go… and it damn sure won’t be the bear.

The hosts and commentary providers for this show are Wildlife Expert, Casey Anderson and Sports analyst, Brandon Tierney. As far as I’m concerned, these two are the best part of the show due to their commentary. The contestants come from all walks of life. We got bodybuilders, MMA fighters, powerlifters, etc. They are all up for the challenge of stepping to these grizzly bears. They get psyched up and really prepared to go in and do work. Meanwhile, the commentators are like, “…It’s a fucking bear, my guy. This only ends one way.” These obstacles the humans are doing get done by the bears day in and day out. Bart is the strongest bear on the mountain. Dude can push two-ton logs like he’s helping a friend out on moving day but he’s the U-Haul. Honey Bump can hit 35 Miles per hour, you’re not beating her in a foot race on her obstacle course. Tank out here eating 80-90 lbs a day. The eating contest is his shit. Even Takeru Kobayashi ain’t stepping to him.

“This is my f’n mountain”

I wish there was a bear translator because I know the bears were talking that shit. Especially Bart. Each time strong bear Bart stepped to the tug of war he was there to break someone down mentally. The MMA Fighter, Ira, on the first episode let out this yell when Bart pulled him off his platform in tug of war. They kept that yell on loop, and I died laughing. The commentators kept playing that back like it was the song of the summer. Matter fact, I’ma make that shit my ringtone. Ira legit had beef with the bear after that cause Bart was doing everything he could to break him mentally. Staring at him like he wanted a title fight. Then, there was a 63-year-old competitor that was a bodybuilder, Steven. Mans was big big. Bart. Didn’t. Give. Not. A. Fuck. Bart stood up on his hind legs, called that man out his name with a growl and proceeded to pull said man so hard he hit his head on a post on the way down. Steven’s arm was scraped and cut. Dude hit his head. and that was all before the maybe 10ft – 15ft drop into the pool below.

Oh, there are female competitors too. Bart still ain’t give a fuck. He’s an equal opportunity employer of fucking people up. Paulina is not only a marathon runner and powerlifter, she’s a bow huntswoman, to which Bart said, GROOOOOOOOOOOW-OOROOOOOOAOOOOOOOOO-RAA! *translation* “fuck every single skill asset and recommendations in your resume. I ain’t Smokey the Bear, but I will stomp the fire out you”

Far as I’m concerned, Bart was cursing each contestant. Bart don’t care about your MMA record. This his house and you owe him rent. Bart don’t give a fuck about you being a jacked 63-year-old. He here to put you on that life alert screen. Bart isn’t impressed by your marathon runners, cause he runs shit here. Listen, Bart may not be respecting these competitors, but I am. It ain’t easy to step to a grizzly bear. There all competing to be in the finals and crowned the superhuman bear mountain champion. This shit cutthroat too. When they get eliminated, they don’t even get a good job. They get a head nod and a “see you the fuck later then.” Thas it. Cold shit. That’s how you competition right there.

If you down to see humans get thrashed around by a team of grizzly bears, then I suggest you check out Man Vs Bear. …yo the commentators/hosts legit really just be sitting there watching this shit happen and laughing man. LOl, it’s like American Ninja Warriors but with bears. Each time a contestant gets up kinda surprised they ain’t last longer the hosts be like… “It’s a freaking bear, bro”. I love it. Come learn about grizzly bears in their habitat and watch this dream team mentally and physically break these humans down.

Man Vs Bear airs on Wednesday, December 4 at 9 PM ET/PT on Discovery and Discovery GO.