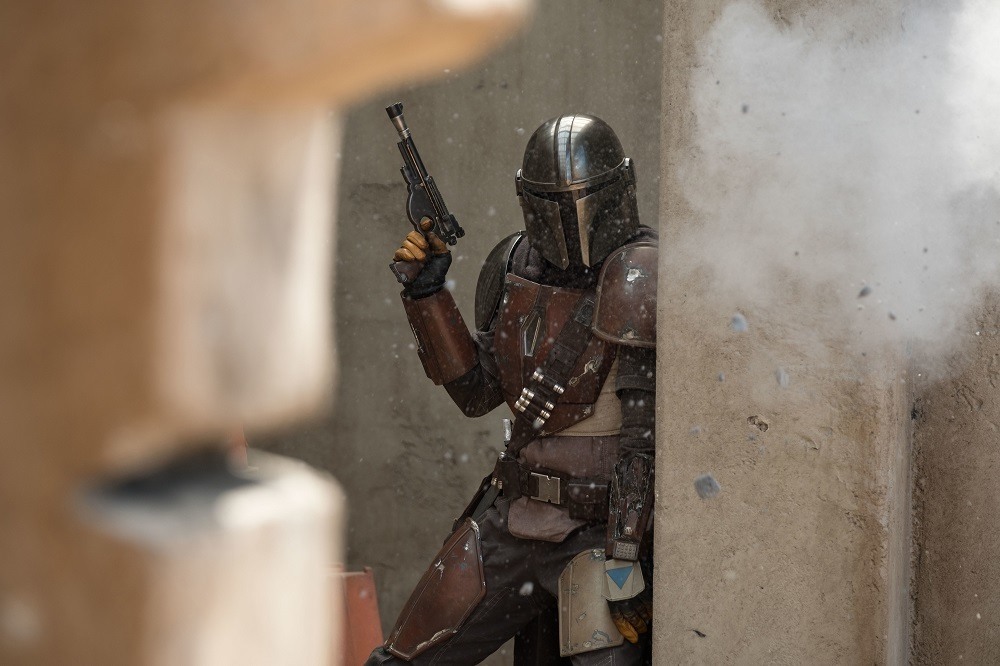 There will be lots and lots to talk about and review when it comes to Disney’s new streaming platform, Disney+. The first major salvo kicking off the streaming wars in earnest. Among the ridiculous flex of Disney’s archive, there are a lot of originals hitting on day one, the crown jewel of course being Star Wars: The Mandalorian. To center us really quick, The Mandalorian takes places after Return of the Jedi, about 20 years before the rise of the First Order, the new antagonists of The Force Awakens. The titular protagonist of the show is a bounty hunter and…that’s really all you get going into this show. Outside of some star power sprinkled here and there, along with cool looking action scenes, a lot of mystery circled this show and exactly what it was going to be about. Now that it’s here, I can report it’s a bit of a mixed bag, but mostly on the good side.

The Mandalorian’s Past and Present

What we learn early on is that The Mandalorian is not actually singular, he is one of many Mandalorians, though the “many” may be overstating things in the present tense of the show. We’re shown early that the Mandalorian Order was once a proud and revered organization of fighters, though it’s not clear if they were always bounty hunters (this kind of feels like a “once proud, but then had to resort to nefarious activities” kind of story). Though their numbers and their influence may have diminished over years, their name still carries weight and seem to be instantly recognizable. When a Mandalorian walks into the building, everyone takes notice. Which brings us to the opening scene and what the show becomes. Sadly, pretty predictable.

If you’ve ever seen a movie or show with a “man of few words gunslinger” protagonist before, then you know what this looks like for an introduction. Cartoonish and over-the-top bad guy challenges him for no real reason. The gunslinger takes out him and every one of his cronies with minimal effort. I’d love to say it eventually breaks this trope, but in the first episode, it really doesn’t. Our hero has a tragic backstory. He doesn’t trust droids, seemingly because he’s more of a throwback kind of ‘slinger. He has a tragic backstory. He has to show deference and kindness at one point to progress on his mission. Oh, that mission is of the off-the-books, super dangerous sort that he may not come back from, shrouded in mystery. You’ve seen this kind of lone wolf story before. I’d argue that there’s a better version of that kind of story coming when The Witcher drops on Netflix next month. But you know what Netflix or any other platform doesn’t have that The Mandalorian has? It’s Star Wars. That’s it, that’s the tweet.

It might be a ho-hum bounty hunter hour of television, but it’s a wonderfully produced and engaging hour of live action Star Wars content. It’s hard to put a price on that. Well, you can, it’s $6.99/month. But if you’re a Star Wars fan that is always hungry for more Star Wars content, that’s a price you’d probably pay without a left to right screen-wipe. What I can definitely report is that you’ll never feel like this story could be taking place anywhere — this is Star Wars folks. The galaxy is vast. The locals are weird. The most alien looking creatures speak the King’s English. Another states “I have spoken” when he ends a monologue. The hero speaks through a mask with a synthesized voice. Creature models are vast and exotic. The ships look future-old. And it looks amazing. Put this production on level with the standalone films, which is a big deal. There is a lot of Star Wars content out there, but there’s a reason everyone was excited for a live action ongoing series.

Much of the allure of this series will be for the tried and true Star Wars aesthetic, much of it will be for the Easter eggs and wondering how it connects to the larger universe. I can say, short of a spoiler, that the surprise ending to the first episode connects to the universe in a big, big way. Part of the challenge of these standalone films, especially as they serve as a prequel to some of the movies, is what will happen to these characters we know we won’t see in the future. The adventure that is sure to kick off from this first episode begs this question largely, as the implications have such gravity. It makes you hope that not only will this story continue in it’s timeline but that it may effect the narrative of Star Wars in our present state (where The Last Jedi is the most recent event).

There’s not a lot we can speak to regarding the acting and performances just yet. The action scenes have been good, but the actual person-to-person interactions are few and far between in the first episode. Pedro Pascal is fine, but one wonders just how much he can do to ground the character emotionally since he’ll never be taking his helmet off. We’ll see how much Carl Weathers factors into future episodes and we know some heavy hitters like Giancarlo Esposito are on the way.

Is The Mandalorian worth your time? If you’re a Star Wars fan, absolutely. For no other reason than it’s more quality made Star Wars. If you run lukewarm on Star Wars (and if you do, how dare you…but seriously, I get it), it may not be enough to sell you a Disney+ subscription if you don’t already have one. The story is pretty straight forward and doesn’t do anything original…except it’s set in a galaxy far, far away. And let’s be real, for many of us, that’s enough to keep us coming back.