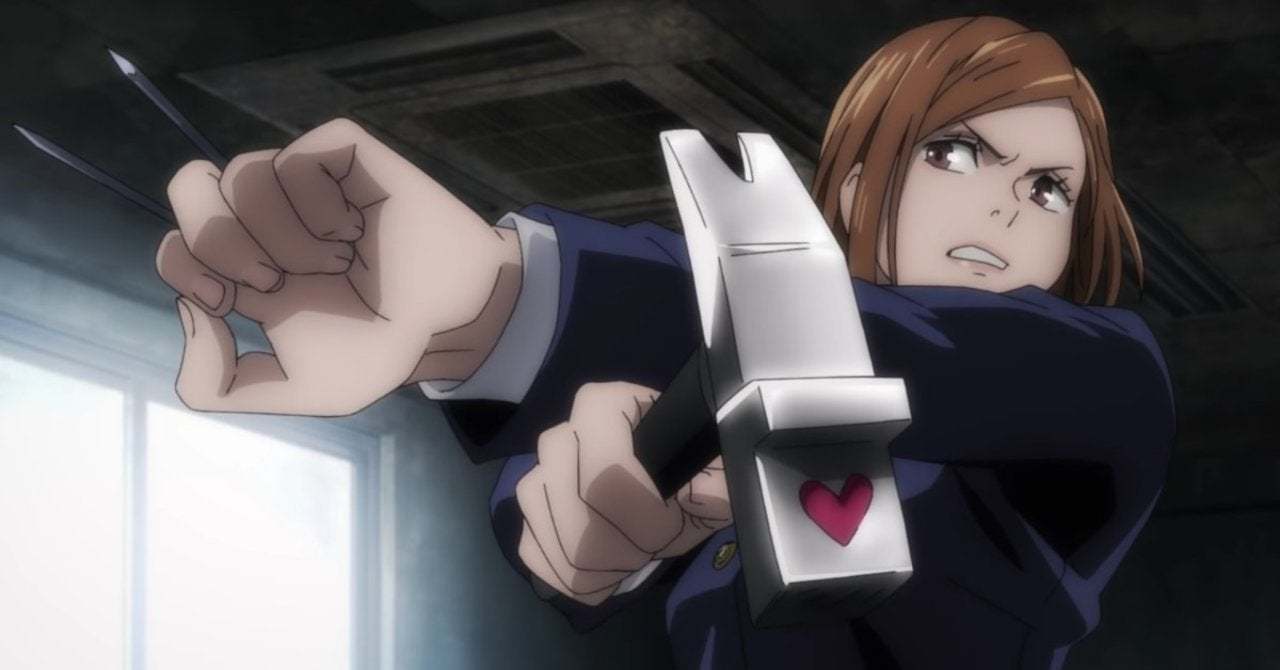 Team Magic and Mayhem is definitely the dark horse team in the bracket. Don’t sleep on them though, underestimate them and you’ll be in a world of trouble.

If you sleep on this jujutsu user, you may never wake up. Nobara Kugisaki may be brash and rough around the edges, but she is not one to be trifled with. She cares just as much about her physical beauty as she does about kickin’ your ass, wearing her absolute truth on her shoulders for the world to see. Beauty and strength go hand in hand for her. She’s also got the stamina and endurance to take on tons of damage and still keep going until her target is beaten and exorcised. She’ll probably just laugh at your weak attempts to defeat her.

Her Straw Doll Technique can render both demon and human dead on their feet with just a single strand of hair and her personal weapons of a hammer and nails. She’ll mock your broke looking looking fashion as she hammers your dome in with Sam B’s “Who Do You Voodoo B***h?” bumping in the background. Don’t turn your back on her, less you find a hammer to the face.

Fierce, loyal, and witty, Luz Noceda one day found herself as the lone human in the magical land of The Boiling Isles. Being a human, she couldn’t use magic the “traditional” way so she found another. Tapping into an ancient form of magic, Luz broke all the rules and is not only learning magic but all forms of magic where before everyone was forced to choose a singular path.

Under the tutelage of Eda, the most notorious outlaw in the lands, Luz isn’t afraid to blaze her own path of magic and break through and knock down anything or anyone that stands in her way. She won’t quit until she comes out on top, even if it kills her. And chances are, if you fight her, you’ll be her friend by the end of the fight.

Mebh Óg MacTíre (put some ‘spect on her name, say the whole thing) is the wildest of wild childs. Literally afraid of nothing but losing her family, she will do whatever it takes to win. She has the ability to communicate and control her wolf pack, giving a horde of wolves the intelligence of a human when pack hunting. One wolf you may be able to handle, but 20 all moving in unison like the zombies in World War Z? You’re done! Along with that, she can control ancient magic that allows her to control nature to an extent and to heal wounds.

Her territory is expansive and if you don’t come correct, you may be loss for all time. You may get a few licks in, but once she heals, she’ll come at you again with full force. And if all that wasn’t enough, in her sleep she can astro-project into a wolf herself, keeping the fight going for as long as it takes. The boss has multiple phases for you to contend with and won’t give you time to rest. Liam Neeson couldn’t handle this rambunctious wild child and no one on this bracket could either.

Webby Vanderquack, granddaughter of Bentina Beakley, A.K.A. Agent 22, Webby has trained her entire life for this. Don’t let her cute exterior and kind heart fool you, if you cross Webby, you’re gonna regret it. High intellect, knowledge of ancient languages and legends, weapons training, martial arts training, Webby is the all-rounder you don’t want your team to encounter. She’s even learned a bit of magic on her journeys. I mean this just isn’t fair to come up against her.

She also has the experience to adapt to any encounter. From shadow demons to evil sorceresses to alien invasions, Webby has come to blows with all of them and always comes out on top. Definitely the heart and fist of her DuckTales family. Mess with her and your messing with the entire extended family, but she’ll be enough to take you down.

Last but most certainly not least, the ringer of Team Magic and Mayhem, Dot Warner. The sister of the Warner Brothers, Dot is no longer content with just being a the cute one. Instead, she’s going to use her wit to make you look like a clown and STILL look cute as a button. Not even death can keep her down, she rose from the grave of cancellation for (as of the time of this article) 3 more seasons of Animaniacs goodness. She can’t stop, she won’t stop, and she’ll Harlem Shake right on your grave.

Let’s be honest, Dot can’t be beat. The reason is she has the advantage of knowing she’s in a cartoon, a gag cartoon at that, giving her access to anything and everything to kick all the ass she wants. You could disintegrate her and she’ll just brush it off, make a joke, and drop an anvil on your head. She can break the fourth wall and even stop the show if she felt like it. No matter what you try, Dot will have the advantage. She just can’t be beat, don’t even try.