[dropcap1]J[/dropcap1]oanna? Is that you starting off this episode in an elegant white dress? Jewelry game on point? Stellar E Corp employee Tyrell still in the picture? Yeah she daydreaming fam. Back in reality, she’s taking a nice baby stroller walk down the block and some original Woodstock attendee tosses gallon of Red paint on her beautiful white dress and baby stroller as she yells out, “Capitalist pig!” Kinda true though…

Elliot still filming Saw 13 in that dungeon, talking to Mr. Robot because he wants to know what happened with Tyrell Wellick when he was out for 3 days.

What’s the last thing you remember?

Mr. Robot tells him that Tyrell was developing too much of a God Complex and shot him. No big deal. Ray eventually summons Elliot and asks if he’s finally ready to do what he’s gotta do. This is Fernando Vega shit all over again. Elliot stay fuckin around with these true blue killas man. He gets to work and the site swiftly rebounds and makes Ray a chunk of money. Just when our boy Elliot was about to get tossed back into his cage, he challenges Ray to a game of chess. Cue Ray’s second creepy villainous montage. Then he finally comes out with the real question: “How long I got?” He knew Elliot would bust out that code snitching and the cops soon swarm the house. He’s finally starting to accept Mr. Robot as his other half.

Who Run The World?

Angela gets full court PRESSED by Agent DiPierro. She peeped Angela was on the restricted floor and started hitting her with the interrogation tactics. Angie from the Block clapped back with that, “I was making plans with my boo.” SWERVE and then completes the E Corp hack. She meets up with Darlene to tell her that she’s finally put all the pieces together about how involved they are in fsociety and talk shit about how condescending her and Elliot used to be. It was some pretty heartbreaking shit. 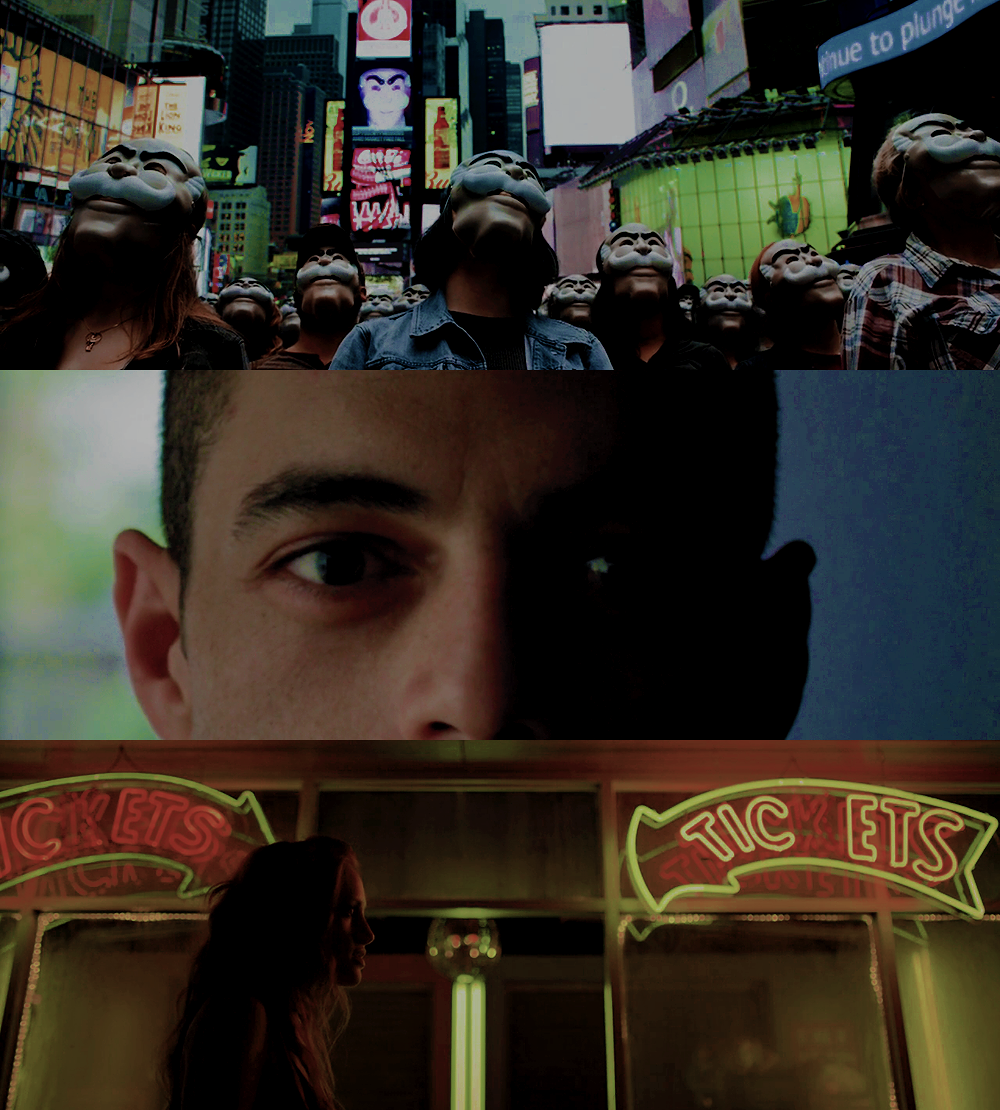 Darlene returns to hacker headquarters to some good news happening on the next day. Oh what could it be…

Agent D Nice asks the Evil corp employees to check the footage on the restricted floor and it’s all gone. All their data has officially been corrupted. D Nice is on to Angel. I foresee a female showdown in our future.

Joanna out here flippin the script after her S&M fix. Her boy toy gives her an ultimatum to come to his 30th bday party as his official girlfriend or he will be gone. Surprise! She doesn’t show up, but drops a way better birthday present on him. Divorce papers. Buckets baby!

Angela approaches her dad (I think it’s her dad. Pretty sure that was pops.) to drop the contingency in the lawsuit. He fires back and asks if she wants the same thing that happened to her mother to happen to more people. He’s like, “I don’t know who this woman before me is and I don’t trust you or these corporate scumbags.” She tells him that she already got the other signatures for this change because of the power of the dollar and told him this isn’t an option. This lil chat was just a courtesy call boo boo.

Aint No Such Thing As Half-Way Crooks Elliot and Leon back at the courts. Leon dropping knowledge on the homie letting him know the hood torn up about what he did. Some praise what he did, some got it out for him. Just as he was finishing his last breath, a group of not very imposing or scary wanna be thugs roll up on the homies. They let them know that that Brave Little Toaster shit is gonna get somebody hurt, then roll out after telling Elliot he now owes them what he lost from Ray’s business.

Philip ‘Gargamel’ Price is in a meeting with Angela telling her about the sudden drop of the contingency in the lawsuit. “My my what a surprise Angela, I’m a pompous ass and didn’t want to ask a lowly blonde girl for help.” Angie like, “Yeah yeah well you can thank me with your power not your fake gratitude. I want to be the new manager of the Risk Management department.” He finally groans, “Ok, I guess. P.S. Do you want to come celebrate my birthday?”

I guess sometimes you gotta…

Elliot returned to his church group yo! Right after the group, he finally begins to open up to Mr. Robot about his desire to finish what he started with Evil Corp, which requires his help. Mr. Robot pops up like, “SON you a natural born leader and shit-fucker-upper. Get yo ass out there and lead your people to go fuck some shit up!”

Angela out here getting acquainted with what’s going on in the Risk Management team. Majority of their time is spent supporting the Crisis Response team, following the 5/9 hack. Her new boss gets her up to speed, gives her some tips and access to the case they’re working on now. You wanna know what the case is? You want to know why this show is so damn amazing? Because they drop parallels to our real world that are amazing to behold and make us want to start a revolution. The case she is given access to is a water contamination case up in Flint. Sam Esmail, you brilliant man. After hearing the water contamination piece, Angela flips it on homie to get in on the daily debrief meeting later that afternoon.

YOOOOOOOOOO the next scene just took this episode from a dribbling 5 point episode and immediately cranked it up over 9000!!! The homie Elliot is taking a nice lil stroll down the block after burning his routine book and finally coming to terms with his fucked-up-in-the-head-ness and gets jumped by those quarter way crooks. They start beating the brakes off Elliot. Then it gets Oz levels of real as the tallest fugazi thug grabs Elliot by the back of the neck and begins to make him assume the position. Then out of nowhere you just hear a knife slashing and men dropping!! Elliot turns around to the DAY 1 HOMIE LEON standing there!! 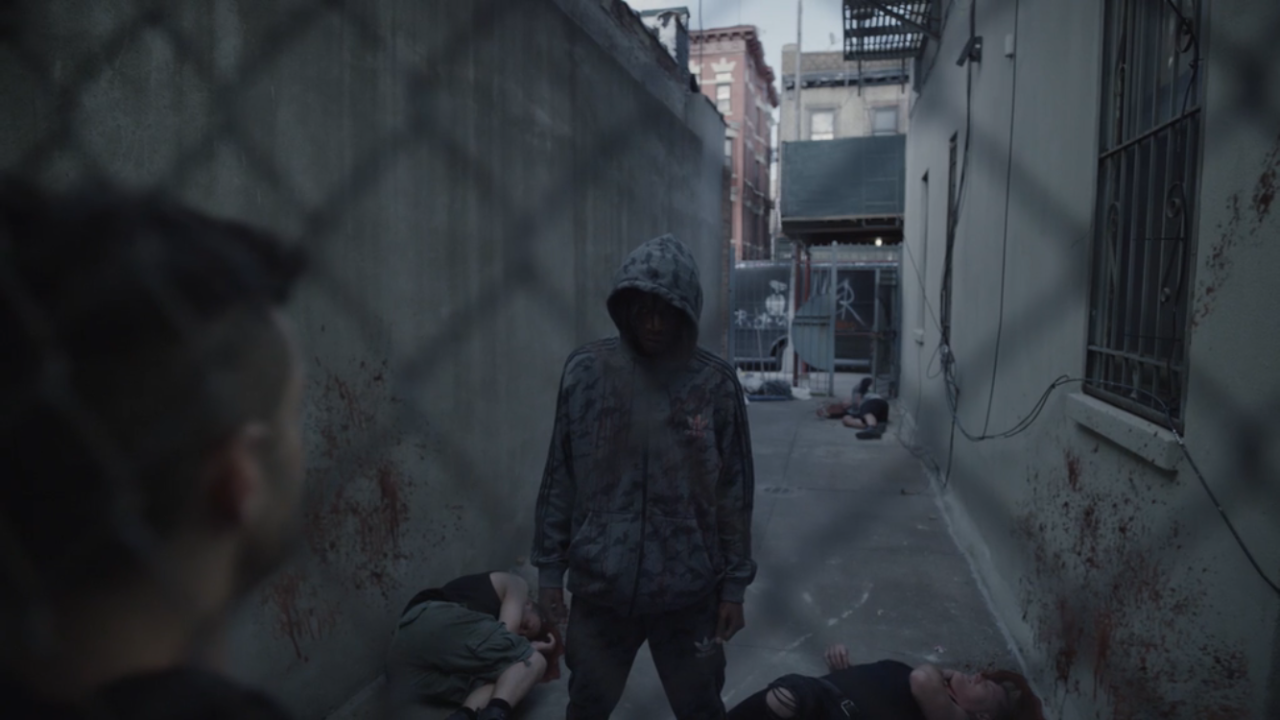 YOO he just Assassins Creeded that shit! Straight up Shinobi flow. He shoves his knife into the rectum of the head would-be rapist then turns to Elliot and says, “You’re gonna get a letter on Tuesday. Do what it says. When you see Whiterose, make sure you say I did you good.” Then pulls the knife from the shitty end, cleans it off and bounces after a great vote of confidence for Elliot.

Angela is sitting in the the meeting listening to hella corporate lawsuit lingo. She tries to lend a helping hand and (possibly secretly) get access to certain files including the Washington Township one when her new boss adjourns the meeting immediately. He basically tells her that Price gave him free reign over her employment. Shadow threat be something savage.

Elliot finally admits to Krista that he has been accepting Mr. Robot so that they can help each other. As he sits in her therapy office it quickly fades to a prison visitors room. Scenes then fly by of Elliot in his ‘outside world settings’, but in his orange jumpsuit. Back and forth the scenes jump. He ends with “No, I didn’t lie to you. This really happened, this was just my way of coping with it. But now, I’d like it if we can trust each other again. Let’s shake on it.”

Mind fuck game is so serious this week!! Has Elliot been in jail this whole season? Did he get locked up after snitching on Ray? Did it happen after the fugazi thug crew slaughter? DAMMIT THIS SHOW IS SO GOOD.

When Leon dropped that Whiterose line, the collective fandom was like:

That group facilitator chick? She out here acting like a hippie nun.

Then we start to notice the context clues and easter eggs: 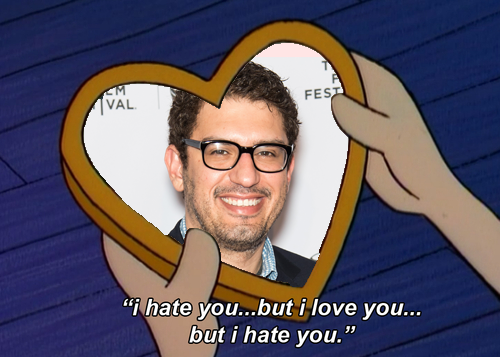 I’m guessing those brass bull balls flying into the House Floor in the U.S. Capital Building was the thing that Darlene was waiting on. Pretty great.

#OllieIsTheWorstWatch: Hopefully he never returns. Unless it’s to be screwed over by Angela. I’d like that.