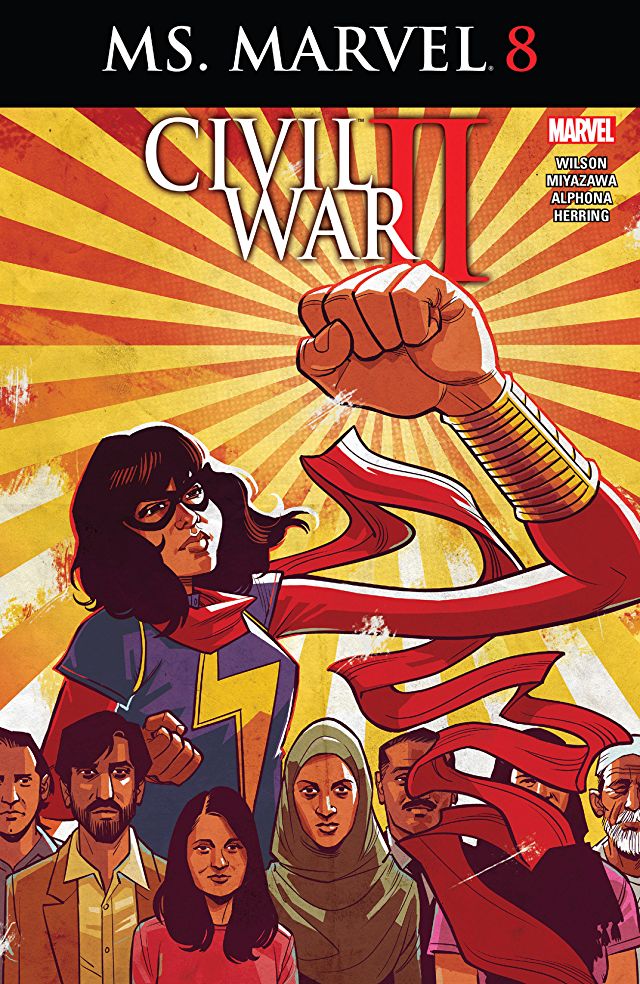 I don’t know about y’all but last issue with Kamala’s school vs Miles’ school at the science fair was probably one of my favorite issues in comic books this year. It was funny, educational, featured my legacy babies, ahem, my children: Kamala, Miles, and Sam and had just enough commentary on what’s happening in the bigger picture of the Marvel Universe at the start of Civil War II, which is still unfolding.

As much as I’m hyped up by issue #7, please know now that this new issue is not lackluster in any way. LISTEN. The opening to issue #8 has me in my feels — This Civil War II event in the Marvel Universe is big. I know this. You know this. But actual civil wars in countries near and far? Countries that have brown and black folks scrambling to leave to survive? To make new homes in places where their accents, last names, cultures, and life experiences are thrown under the bus to be used as joke, a stereotypical political cartoon as an “example”? Wooooo. To tie this into the bloodline of Kamala as a first generation Pakistani-American who, never experiencing the horrors of those who came before her, will come face to face with something her folks never had to deal with…mutants, terrigen mists, and all the wonders of alternative universes that Marvel brings?

Our fave cinnamon roll heads out to space to meet up with her biggest hero, Captain Marvel, Carol Danvers to you civilians. She’s stoked and becomes even more stoked when she finds that she’s been tasked with an important mission with SIDEKICKS involving Ulysses, the newest wonder kid from Team Inhuman who apparently can predict where and when crimes and big life changing events will happen….

[divider type=”space_thin”]
Kamala is loyal, brave, and honest to a fault. Eager to please her mentor/hero, be a great superhero in her own right, and do her part in making the streets of her city more safe she agrees to take on this task which includes a small team of cross-fit wonder Millennials (probably trained by our very own Nicole Homer) to track down crimes and tragedies about to happen and stop them — A win-win, right? Right?

As the team makes progress and the night time news exclaims about it, Kamala starts seeing a pattern: Carol was right. Ulysses’s ability is uncanny and everything from small-time robberies to a tank crashing downtown with a self-exploding mechanism (unbeknownst to its driver who stole it) is averted.

But there’s the murky, vague line in all of this: How do you process these crimes? How do you prosecute these perpetrators? By what new definition do you define crime?

[divider type=”space_thin”]
NEW SISTER-IN-LAW, Tyesha graces us with her presence and points out to Kamala that this ain’t new. Just a newly packaged product with a new name. When does this new way of doing things open your eyes to the fact that maybe this is a bit over your head? Kamala is so sure she’s on the right track here. Of all the hardships she’s been through, of all the times she’s had to pick herself up from being knocked down, she’s sure of this new plan…until the seeds of doubt show themselves in the cliff hanger — because how well do you think you know people, your neighbors, your classmates, your friends? How far will you go to brand them criminals?

This is a pivotal issue that dives right into the Civil War storyline perfectly with a fresh face we know as Kamala Khan, Ms. Marvel.

9 Worst Case Scenarios out of 10

What happens next? What happened before? Read all of our Ms. Marvel reviews here so you’ll always be ready for the next issue.