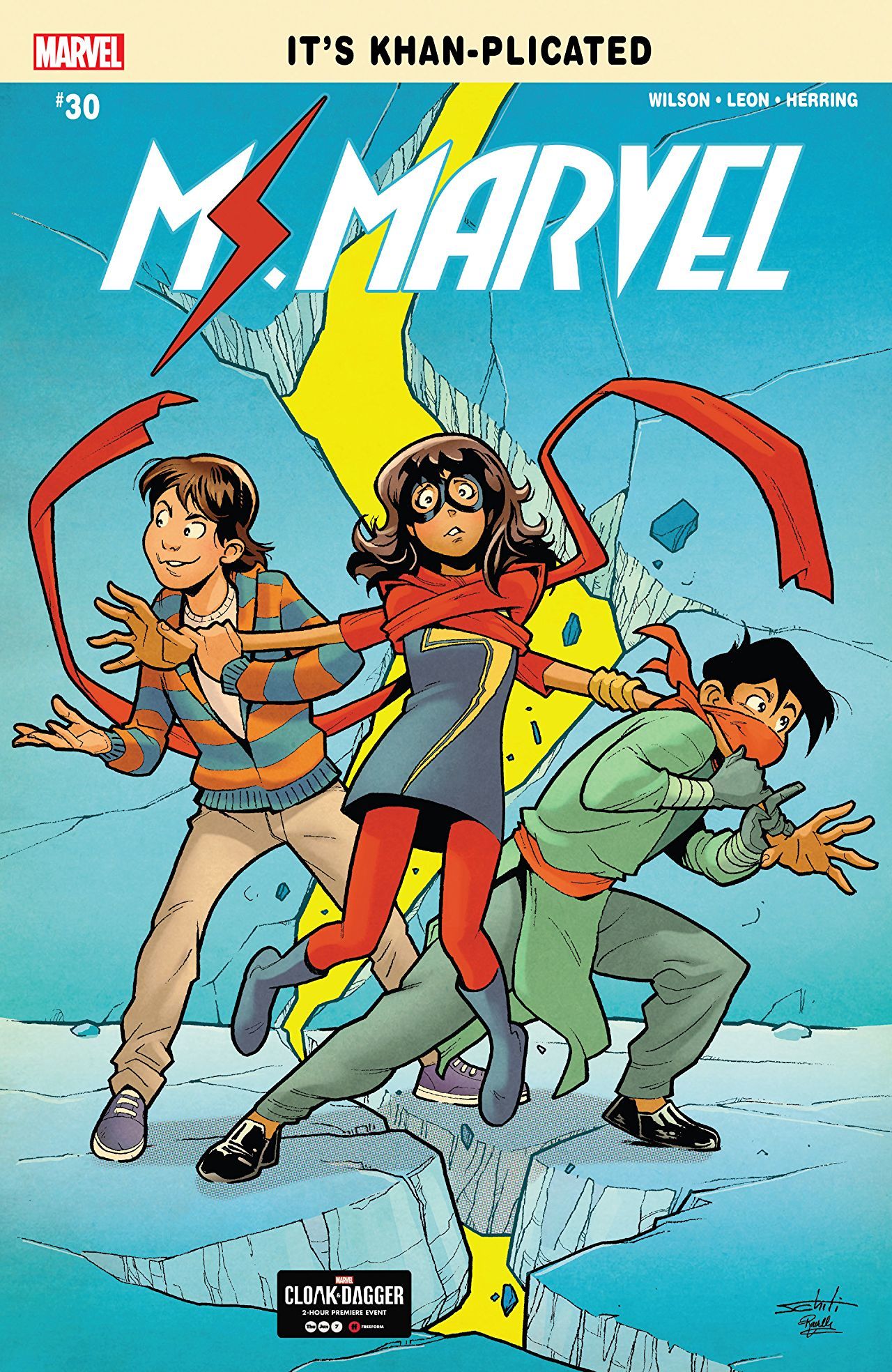 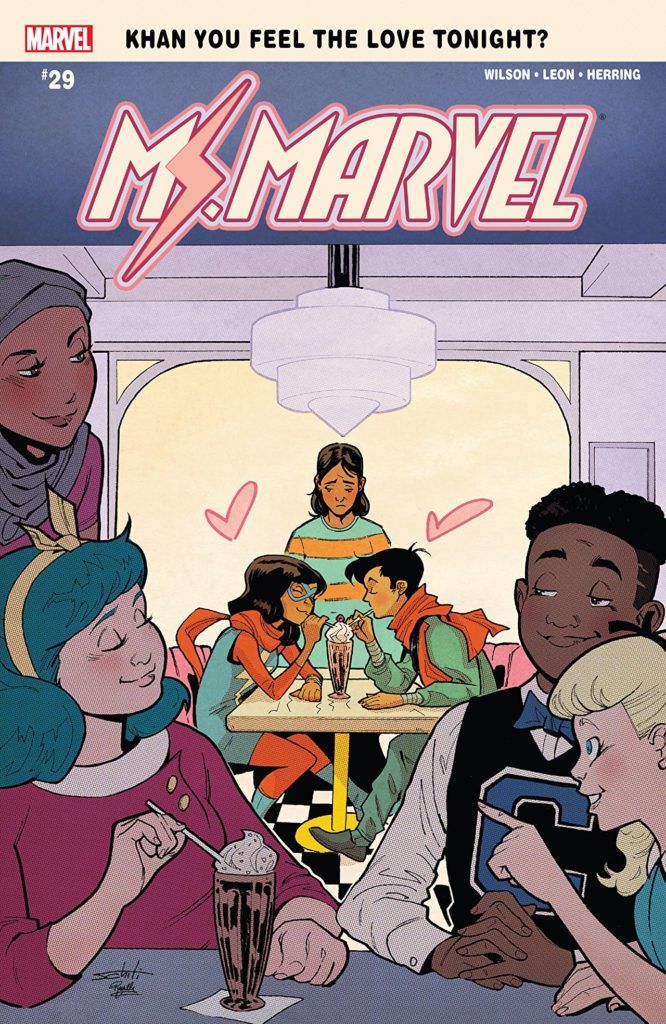 You’ll remember from #29, that Aamir and Tyesha have their baby, making Kamala into Auntie Kamala. She’s a Phuppo (aunt on your father’s side)!

You’ll also remember that everyone’s favorite unrequited love interest, Bruno is back from Wakanda on a visit. He brings Kwezi, his Wakandan roommate, along as an exchange student doing anthropological research on American teens. There’s also a new mean-girl at school, with a secret plan. Oh, and there was THE KISS! 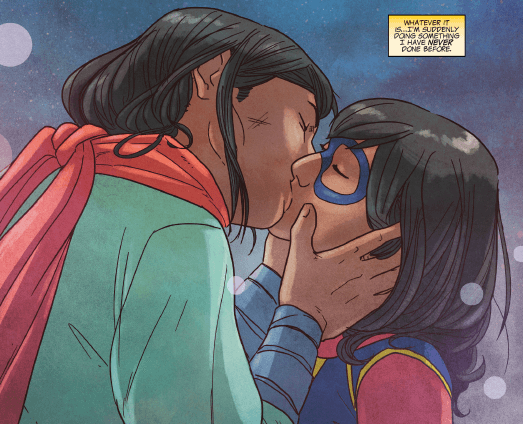 Don’t freak out. I freaked out. I made that noise that only dolphins and bats can hear. Red Dagger has been set up as the mysterious, dashing young love interest from the beginning, so to have that come to pass felt so very teen romance I couldn’t even handle it. But I also knew it was a problem. I mean really, Bruno is back.

Which brings us to Issue #30, where all of this teen drama gets sorted out, along with the inevitable victory over the villain.

I’m not gonna say I’m uncritically satisfied with how things work out. I’m Team Mike all the way, and I want the round-faced girl with two moms to be happy. But just as we know that Kamala can’t make that love connection with Red Dagger, Bruno can’t do so with Mike. Even though eventually Kamala and Bruno may go their separate ways, they have too much history to just wander off from. They have to try it, right? 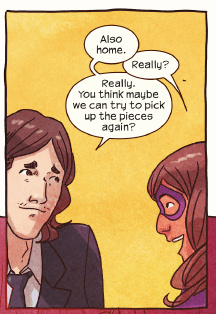 Zoe continues to shine this issue as well, as does the whole supporting cast. The team of Ms Marvel backups who filled in while Kamala was off finding herself remain on their own. They refuse to fall back into a “Ms Marvel auxiliary” role. The foursome have their own dynamic and are going to offer their own takes on human experiences. They will only add to the magic of the comic going forward. 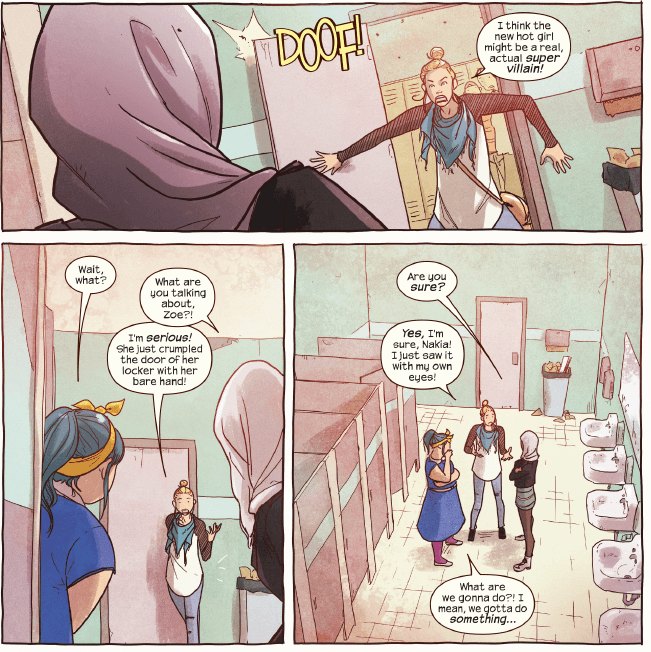 Yeah, there’s a villain. Which is great. But as with most Ms. Marvel comics, the villain is our own bad behaviors, our desire to hide from what’s true and good in ourselves. Once everyone: Bruno, Dagger, Kamala, even Zoe, comes clean about that, the villain falls down pretty quick.

This 2-issue arc touched on a sensitive subject for some — teen romantic love and kissing — but did so with the usual combination of tenderness, honesty, and joy. No matter how you feel, having someone to talk to about those feelings is key. A friend, an auntie, a minister, whoever. This weekend, every comic nerd I talked to, regardless of age or gender or fandom, said they read Ms. Marvel first on Wednesdays. Arcs like this are why.

9 awkward teen dances out of 10