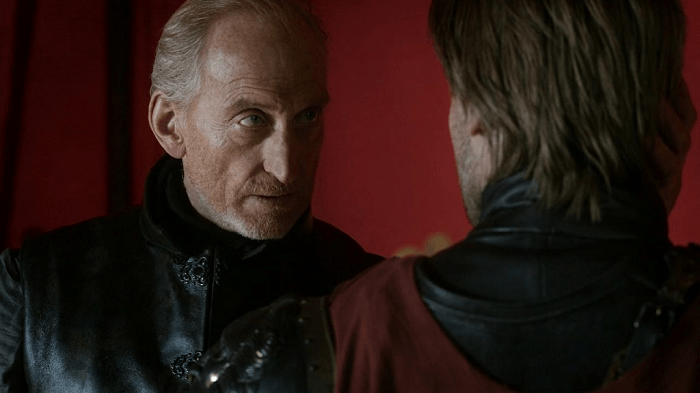 From Season One, Episode Seven: You Win or You Die

Two revelations I’ve had while doing this countdown:

1) Of my top 5 moments, 4 are from season 1 and the other is from season 2. I regret nothing. I have purposely left off the biggest moments of the show (like Ned’s, ahem, fate or The Red Wedding) is one reason why, the other being that Season 1 naturally had some of the best “this is who this person is and we can tell who this person will be” moments. In a lore this big with foreshadowing and ill-timed fates, that looms large.

2) I recently did an interview with Blavity in which I confessed that I personally was most like Jaime Lannister (without the gross stuff or attempted child murder, as if…). I didn’t realize why this scene resonated with me so much until I realized that I’ve had a version of this conversation with my own father. Like, a few times. Just wish I had the army he did sometimes. 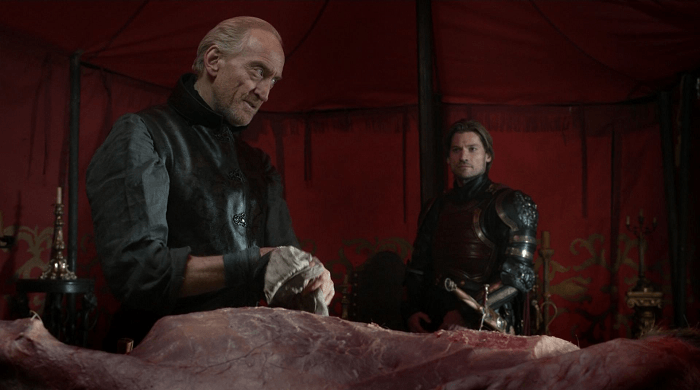 Speaking specifically to this scene, let’s be clear about something: this is one of the best character introductions on a major show of all time. After Tywin’s name being mentioned time and time again about how he was actually the richest and most powerful man in Westeros, we are shown that in full force. But we aren’t shown some tired symbol of strength like Tywin leading a huge army across a battlefield. We get Tywin, skinning a dear while holding court with his son.  Not only does this completely fulfill the legend we’ve heard of Tywin in the servitude he commands from others, it’s also the first time we’ve seen Jaime in the subservient role of just shutting the hell up and listening. To this point, Jaime was definitely the antagonist to the Starks, pushing Bran from a window and taking on Ned in the courtyard, but we learned just how small Jaime was when it came to power in Westeros.

I still think that Lena Headey is the best actress or actor on the show, but Charles Dance was absolutely made for this role as he just dines on the scenery. And as if all these moments weren’t enough to warrant this scene being so high on my list, it also proved something else that will be especially important for the upcoming season: this scene is completely TV-created, as in it doesn’t happen in the book. The showrunners did this most often with Tywin and Robb Stark as they were hugely important to the show, but were not Point of View characters in the book and therefore only got shine in someone else’s narrative. This was the first tumbler that fell into place that said we could absolutely trust these guys with the source material, especially if they needed to create their own storylines (like what has been confirmed to happen in the upcoming season).  Let us not forget the overt symbolism that Tywin is cleaning and skinning a stag (with blood on his hands no doubt), which is the banner sigil of his King, Robert Baratheon. It’s a nice metaphor for his relationship with the crown, and also foreshadows the fate of that house. Overall, it’s just a brilliant, brilliant scene with great writing, acting and innovation.