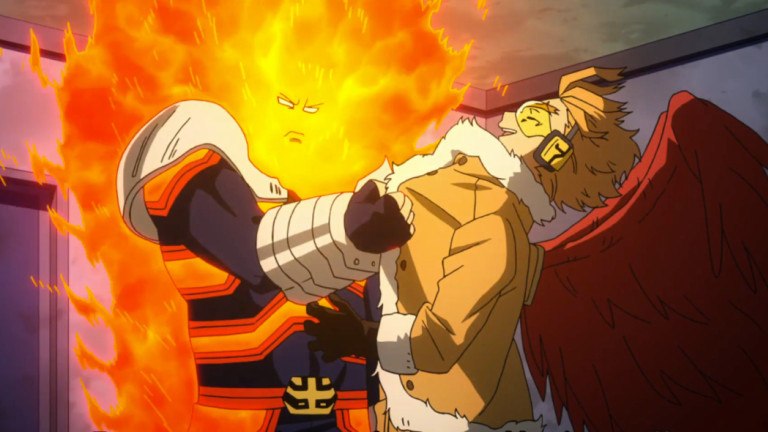 During one of the most pulse pounding, starry eyed, passion filled musical performances of recent anime history, a girl who’s only known pain, abandonment and manipulation experiences her first taste of joy and elation. The smile that comes across Eri’s face was jubilee incarnate, and it filled me with more pride than I knew I could have for a scene out of a Shonen series.

To keep an eye on that horn and help nurture her quirk development, Eri is announced as the newest UA resident and all the students are fawning over her, but of course all Deku wants to know is the logistics behind this miraculous turn of events. Me? I’m just hype we’ll be getting more jokes about her being Mirio’s daughter.

87 episodes in and we’ve finally been given some real information about the hero ranking that has been alluded to more times than Bakugo has screamed at someone, but before we can get to that it’s cuteness overload at UA. Pro heroes Telepath, Search, Pliabody and Earthplow; the Wild Wild Pussycats pull up talmbout we back in business…except Ragdoll, who is sidelined to office work. She’s still quirkless, because All for One is still being a major dick down in Tartarus and can’t be trusted to “return” someone’s powers.

Sidebar: Can we talk about my girl Telepath puttin young Kota on blast?!?! Homegirl was like “Psssstt! Midoriya! Young stunna out here rockin your Bompton stompers fam! You got a fan homie!” Lil dude was all flustered and bout to blush! I don’t know how but Midoriya manages to pull off another incredible best boy moment, and man do I love to see it.

So yeah after WWP basically told them they back in the game for the clout, the kids start buzzing about the whole reason we’re here! The first Hero Billboard Chart ranking since the Kamino incident where All-Might lost the retirement match but won the battle with AFO. Little did I know, the hero they’ve been teasing us with finally gets his due, and he goes by the name of Hawks! Capital H. Plural.

The number 2 hero is young, full of bravado and out here stuntin on the whole nation! Once he gets his intro, the winged wonder is talkin reckless and takin direct shots at Endeavor right on the stage like nobody’s watching. I don’t know much about dude, besides the numerous records he done broke on his way to the top 3, but he damn sure got a level of confidence most heroes dream about.

Praise Bast, it wasn’t just the Hawks show! Out of left field we got the Rabbit Hero Miruko donning the #5 spot, stuntin on ayebody in all her melanin glory! If we’re keepin it a hunnit, we could’ve ended the episode right there and I would’ve been good, but I digress. Edgeshot is definitely bout to catch all the attention as the head ninja in a superhero anime show. Best Jeanist MIA but we already know he the truth, so no words need to be said about the most impressive hero from the Kamino operation to save Bakugo and bust villainous ass. Last but certainly not least is the man who been the interim #1 hero for like 3 months; Endeavor finally reaches the pinnacle he has been striving for. Too bad Shoto don’t look a tad bit impressed with this accolade.

As the episode closes out, we see Hawks give Endeavor some public relations tips that go oh so horribly wrong. Dabi is in the cut plotting with an upgraded Nomu called High End who’s about to force Endeavor to show what he’s really made of. It seems like it might be time for the new numbers 1 & 2 to finally get some proper screen time, and I can’t wait to see just how sideways this season finale of My Hero Academia is going to go.