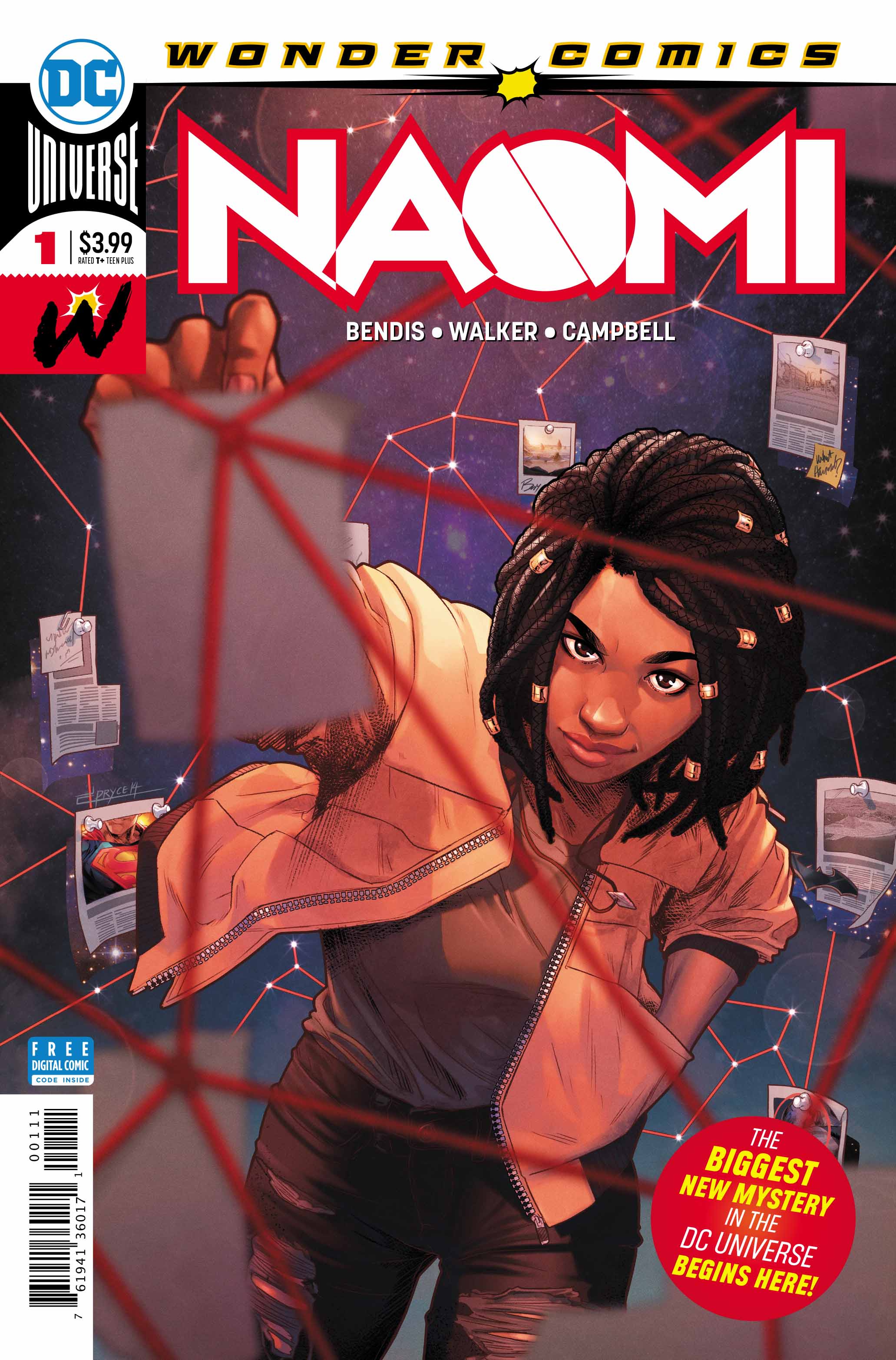 Metropolis, Metro City, Gotham City, Coast City, and Central City. Comic fan or not, you know at least one of these cities from the DC Universe along with the hero or heroes that protect it. Now, what about the cities that aren’t so well known in the DC Universe. What of the things that happen in a small town removed from all the superhero battles? That’s the major premise of Naomi. She’s just a small town girl living in a place where nothing happens… that is until Superman literally comes through her block throwing hands.

Yeah, Superman comes crashing through the town of Port Oswego and our girl Naomi. Missed it. The biggest thing to happen in the town. The biggest thing to happen in these resident’s lives to date, and she missed it. that is until Superman comes back to clean up the mess, because he’s freaking Superman. So of course, he does. Keep in mind, this isn’t a story about Superman. This is about Naomi’s. Supes is just a footnote, something Brian Michael Bendis and David F. Walker make clear from jump. 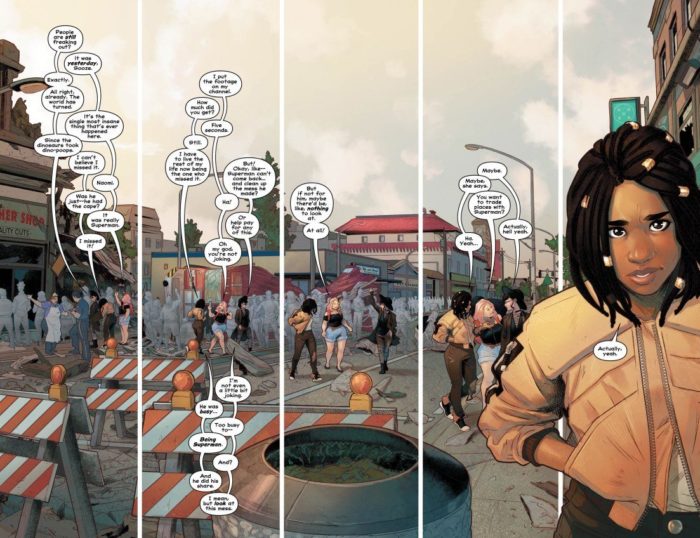 Things Bout to get Real Nancy Drew up in Here

Walker and Bendis are two writers where the attention is in the dialogue. We’re able to get a sense of who Naomi is through her interactions with her friends, but we uncover a lot more with her therapist. Bendis and Walker seamlessly show what Superman means to her and why that is so. That’s not to say that everything’s going right in Naomi’s life as we see what word/thing being brought up that will set her off.

We don’t know much about Naomi accept that she feels somewhat out of place. All we know about her past so far is that she’s adopted. What we also know is that through some investigative digging on her behalf, nothing about Superman’s presence in town hits the media. Which seems kind of odd but also very rooted in real life. How many times do certain big things happen in little-known places that get thrown to the side or fall between the cracks? This is where Bendis and Walker thrive. They take that premise and run with it, and Naomi must try to uncover an event from years ago that may (or may not) coincide with her past.

But do you See all this Art Goin on?

Ready to talk about these visuals and this art now? Yeah, I think we are. Jamal Campbell is pretty much untouchable on the pens and ink. The look of this book and the characters are visually stunning. Listen, Campbell makes these characters look their age flawlessly. Each character’s facials to their choice in style makes has them unique. Naomi’s design tho, you can tell there’s just something more to her. Everyone looks great but there’s a certain wave she has that puts her at the forefront and rightfully so since it is her book after all. 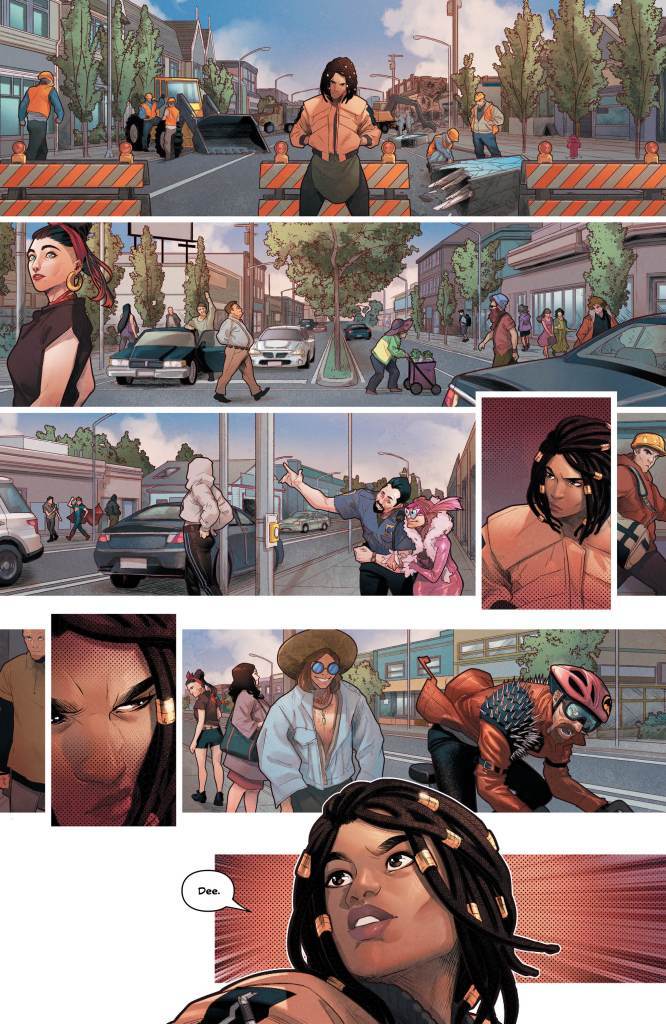 What really drives Naomi over the top to me is the detailing of her braids. It may seem trivial but trust, it ain’t. That detail means a lot when dealing with Black/POC characters. Campbell really makes her stand out amongst a sea of popular DC characters. Her look is so distinct and exactly what’s needed to grab the reader’s attention. Even the background is popping man. There’s a sunset in here that’s straight Wakanda beautiful towards the end.

The series is off to a good start because it is just the start. We have no idea where this will lead but what we do know is that even small towns have their own secret. Things happen all the time, and Naomi is on a path to discovering something that is going to have some serious ramifications for the DC Universe. We don’t know how big the secret is but Bendis, Walker, and Campbell are hitting the ground running to make this journey memorable.