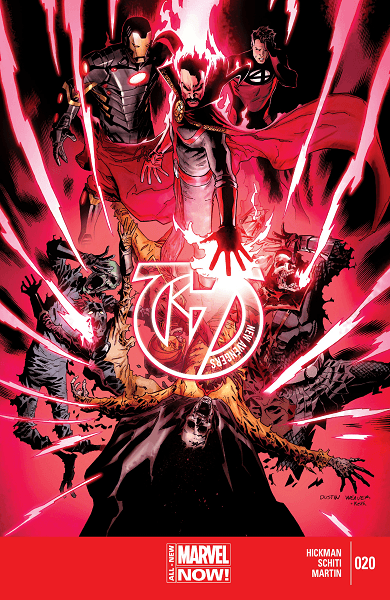 Well gotdamn, we deserved this issue, didn’t we? Seriously, all the plot threads involving the incursion events and Doctor Strange’s quest for more power (but not Black Swan, Han Solo-ed Thanos or the other story lines) came together beautifully in this issue. And if you have been reading my reviews over the last few months on this book, you know I felt that we circled the wagons twice over to get here. Even with the labor of getting to this fight between the Illuminati and the Great Society, the side effect is that this battle was incredibly earned with lots of battles within the battles occurring. The perfect side companion to the fighting was the very streamlined back story of what exactly Doctor Strange has been up to since being a puppet during the Infinity storyline. And my goodness, he’s been up to A LOT.

The best compliment I can give this issue is that the fight and side story filled it to the brim and yet I was still disappointed that it had to end with the battle tilting significantly one way, but not being won yet. For the first time in a while, the status of each member of the Illuminati is accounted for in an important way and I’m really looking forward to where they end up.

Also, for such an action heavy issue, the art by Schiti is top notch in this one. It seems every hero on both sides is showcased well with their powers and abilities and some panels just jump out at you for how vibrant they are without being overpowering. A job well done all the way around.

This particular issue of New Avengers accomplishes a lot, including giving actual weight to battling for a planet’s existence. Something we haven’t really seen since these incursion events began. Hopefully Hickman has done all the set-up possible and rolls out some consecutive issues that are as weighty as this one.