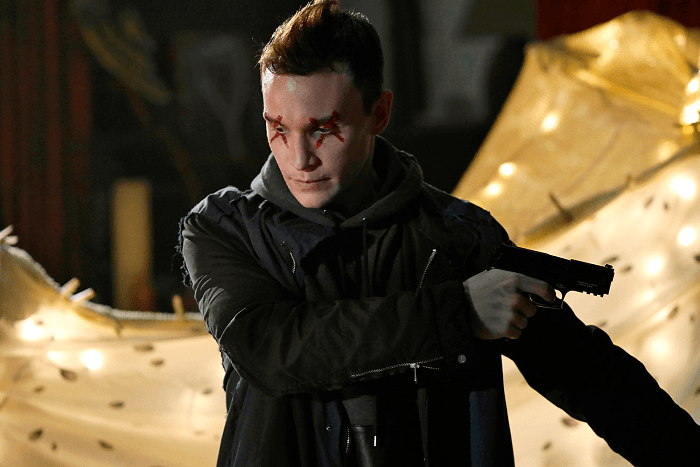 Listen, #ClonesOnClonesOnClones are in the building, but I wish I was just talking about the wardrobe changes of Tatiana Maslany. Naw, these fuckboy clones out here doing THE most. This episode picks up with dude coming back to his post and seeing the guard with his Stephen Hawking splashed across the wall. He calls that shit in like like he just found out a dog shit in the yard.

So when they aren’t terrorizing the Sestras or leading prison escapes, the Worst Generation is out here taking home women and bringing extra favors to the party. I mean, she ain’t just some shallow girl they picked up, she is official about not giving up the goods unless you confirm that you are special forces or at least not selling horse feed as an occupation. Now look, I know the ecstasy hit people different ways, but either she doesn’t count very well, or she thought she was having sex with an octopus when the extra hands started touching her and she was MAAAAD slow to react.

Sarah is stressed out about all the goings on, but Cal takes her and Kira “home” and shows her that this settling down shit is possible. Of course, we ain’t gonna ask how Cal got this bomb ass spot in the city with exposed brick walls and shit on a lumberjack salary but…details, details.

Back in fuckboy HQ, these dudes are waking up from their conquest when their handler, MUTHAFUCKIN PAUL comes to the door. This dude. You might be impossibly handsome with a jaw line that can cut diamonds, but we ain’t forgot about how you did the Sestras, homie. 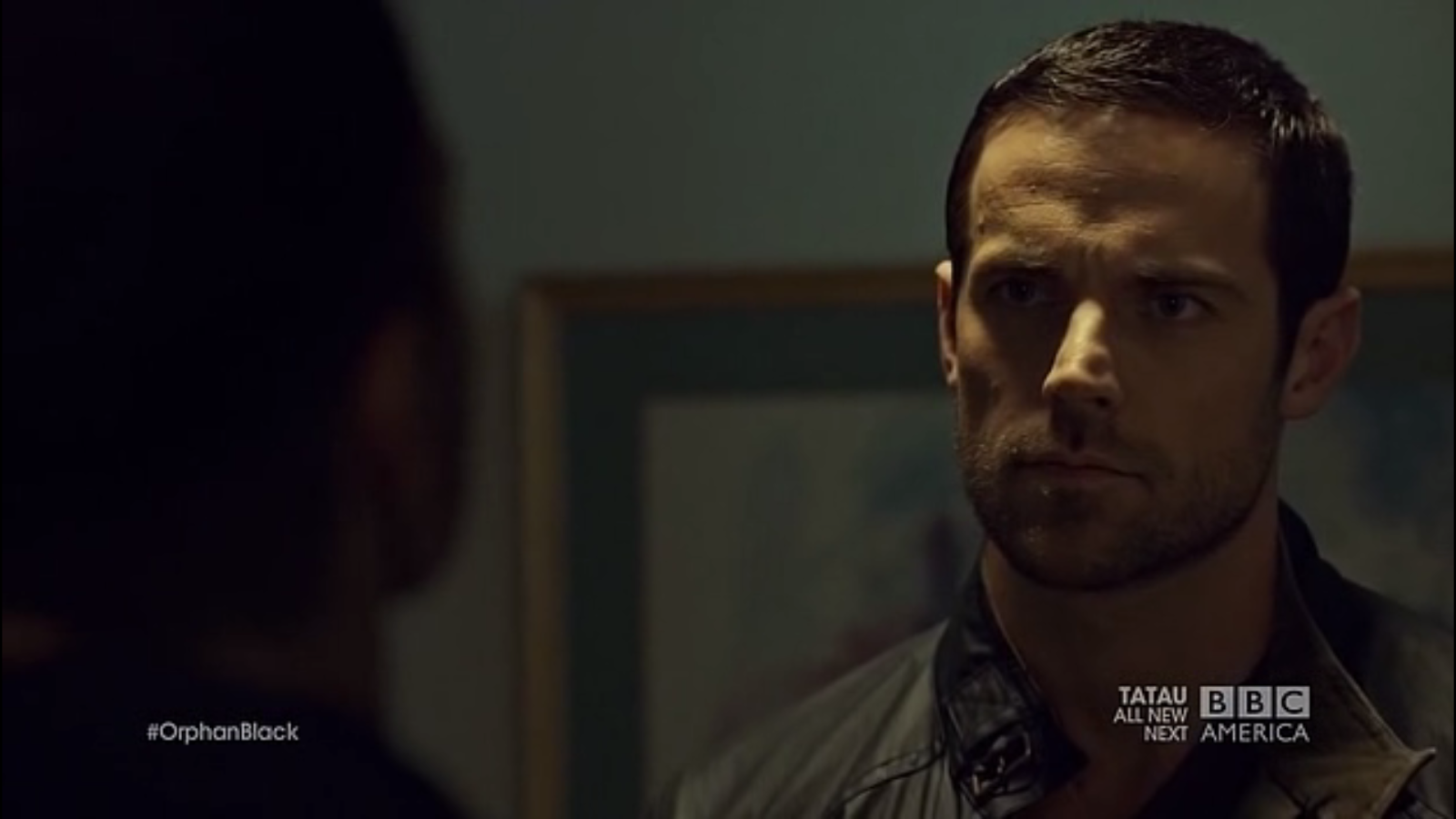 He starts putting them through the trials that sound like some shit they ask you when you’ve been in a prison camp for 6 months and they’re just trying to wear you down [hold that thought]. Seth is faltering hard on this Red Fish, Blue Fish, Cloned Fish, Cloned Fish, shit and Paul can see it. He gives these cats their extraction orders, even though they didn’t finish the job.

Scott shows up to scoop Cosima from Felix’s spot and Felix answer the door like, “I woke up like this. A Greek God. That’s what I wake up like.”

Cosima’s bloodwork is doing aiight, but it’s time to get back to work.

In Suburbia, Alison and Donnie both rockin’ their regal J Crew gear at the soccer field while Alison plottin’ her come up.

[quote_simple]Alison: Sorry, I meant to say I could beat her like a French Meringue.[/quote_simple]

Then Alison The Privileged said she’s not gonna let her move their kids to the ghetto and I blacked out because of the blunt force trauma of tone deafness. When I came to the Hendrix duo was working on a plan for the campaign and Donnie was still failing horribly at social cues and phrasing.

Ramone aka Pusha T shows up and says hi, letting Alison know that he does his best business on Saturdays when the house wives are getting some fresh air and a side of Vicodin. He also says, he’s getting out of the business, because even street pharmacists make more money with a degree.

While playing some living room hockey (yeah, that shit never happened in my home, I’ll let y’all speculate why), Sarah gets a call from Detective Bell to consult her homegirl in the opening filing a police report and to let her know that it’s still ok for Black folk to appear on the show. Cal tries to get her to stay, but Sarah is non-compliant like a muthafucka and her priority is still looking out for Sestras.

Welcome back Helena. Woah, what the fuck are y’all doing to Helena?!?! Naw man, what episode of 24 did I accidentally turn to? Calling that shit a stress test is like calling an earthquake “something tuna I ate at lunch that didn’t agree with me.” Fuck all that. Finally the “mother” of the program comes in and pulls Helena away.

After a brief moment of Felix trying to convince Mrs. S that she’s not completely horrible (I remain unconvinced as well, Fee), Cosima and Scott are waiting on Dr. Nealon. He tells Cosima that she’s doing well and that they’ll be working on curing her together from here on out, but Cosima is not impressed with dude.

She asks him when he was gonna let them know that fuckboy clone #1 escaped and of course, he got no answers for that shit. He also tells them that supposedly, the Duncans hid who the original donors were and died with the secret, so those original genomes extinct like the Wooly Mammoth and Luke Skywalker’s right hand. Cosima don’t really look convinced though.

Art is walking the victim out of the precinct (who is pissed that the police can’t do more about her assault…Lawd…the time we could spend on THIS shit), when SarahBeth rolls up on them in the street.


[divider type=”space_thin”]
SarahBeth gets the story straight from the victim, gaining intel about how her night with the hatchets went down.

Meanwhile in Privileged City, Alison and Donnie are trying to break bad by buying Ramone’s business. And contrary to what Donnie says, yeah, I’m doubting their stones.

And shocker alert, the fuckboy clones are not following orders and have went off the reservation. I’m shocked, shocked to see gambling in here. Rudy ain’t about that going quietly into the night shit and he knows his brother ain’t long for this clone life, so he’s got other plans. He breaks into Felix’s apartment, searching for those samples. All up in my dude’s personal space. #ProtectFelixDawkinsAtAllCosts

Since I guess these Castor fucks are all out of torture, they’re putting Helena through the same logic-based ritual that Paul did with the fuckboys. Except Helena is much less cooperative about the shit.

[divider type=”space_thin”]
She listening to her Jiminy Scorpion and relaying her answers like Tyler Durden.

Den Mother of the Worst Guys takes Helena for a walk and this shit is exactly what it looks like, a military compound. You can tell Helena is pregnant, cuz season 1 Helena would’ve broke out of here a day ago and left about 7 highly trained dudebros with their body’s leaking that life liquid in her wake. Den Mother claims that Sarah and the rest of the Sestras sold her out, but Helena don’t believe that shit…yet.

Sarah shows up to Mrs. S’s crib and is really not here to stand on ceremony. She’s saying that Paul has gone dark and can’t be trusted, but she also tells Sarah that her and Kira gotta get the fuck outta dodge. She tells a story about how she had to flee London with them before, but Sarah still looking at her like…

Ramone is in the parking lot, showing all the goods to Alison and Donnie. Then he hits them with the price point for all of this and it sounds like a whole lot of not financially viable. Alison is ready to empty their retirement and do this shit “for the good of the kids” like the show Weeds didn’t already exist.

Cal is unwrapping glassware or some shit when he hears some shit outside. He investigates, finds nothing there, but of course, Paul standing behind the door like, “come on, you KNEW I was gonna be standing here when you got back.” In the middle of their handsome off, Paul tells Cal that his best bet is to convince Sarah to get far, far away, but not before he lets it out that Cal got rich developing weapons and shit. So apparently, that 401K for woodsmen isn’t as flush as Cal led us to believe.

Back at Fee’s crib, Sarah and Kira are getting ready for bed, but Rudy, leader of the most notorious boyband stateside is still there and takes Kira hostage while he presses Sarah for information on Duncan’s work.

Cal tries to get a hold of her, but when he can’t, he does what any survivalist does and rushes straight into danger. He runs into Seth at the bottom of the stairs and recognizes the tattoo, knowing that the fuckboys must be on tour in his city right now. So, I’ve resisted it long enough, but this is where the actor that plays Cal really needed to challenge his role as Daario Naharis on Thrones because he could’ve at least followed up his sneak punch with a left straight to the jaw or knee to the stomach or something. Who the hell Cal think he is, One Punch Mickey?

That shit doesn’t matter though because Seth start shutting down like Skynet finally took over and it results with him convulsing on the floor and yelling, while Cal thinks it’s a good day because he didn’t even have to use his AK. Rudy realizes that Sarah doesn’t have the info he needs and goes to his brother. When he sees he’s beyond saving, he sends Seth to that big ass clone reproduction plant in the sky.

Sarah finally realizes that this shit too hot for Kira to be around, but she’s too invested in getting Helena back, so she sends Kira away with Poppa Cal out of the country. Next step is finding fuckboy in the wind, Prolethean defector, Mark.

Which shouldn’t be too hard, if you just follow the trail of No chill chromosomes and the smell of burning flesh…