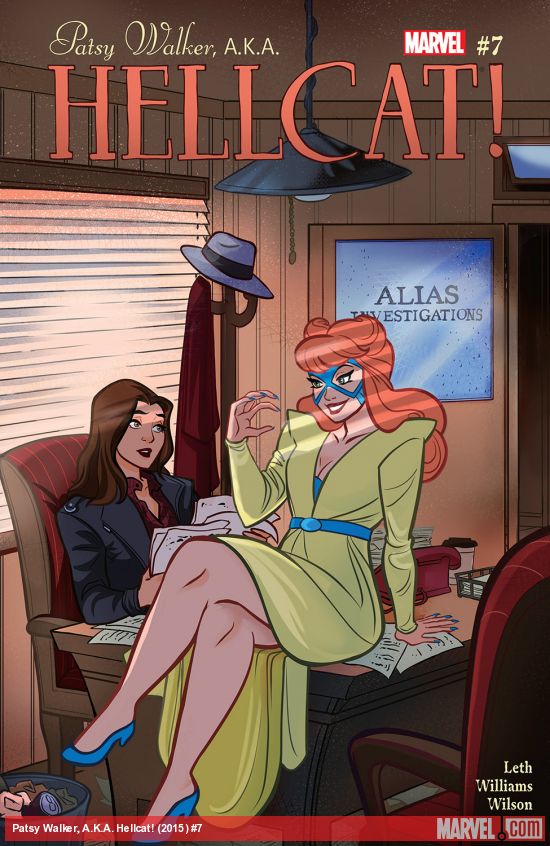 “Now these the comic book pages I been talking about! You think it’s a game? You think it’s a fucking game?!” Oh yes, I had to paraphrase that DMX track because we are back in business with Patsy Walker, folks. Last month’s issue was really a side adventure (read: filler) but we’re now back to the main story with a special guest referee Jessica Jones on the track, and Leth’s use of her character is picture perfect. Leth is able to capture the cool, calm demeanor of Jones in her private eye element. Jones has been hired by Hedy Wolfe to dig up dirt on Patsy to help with the smear campaign when they go to court over Patsy’s novels. Jessica Jones throws a curve ball into Hedy’s plans as we found out from last issue, she’s team Patsy. What’s next comes a really great team up between two sides of the same coin with Patsy and Jessica. 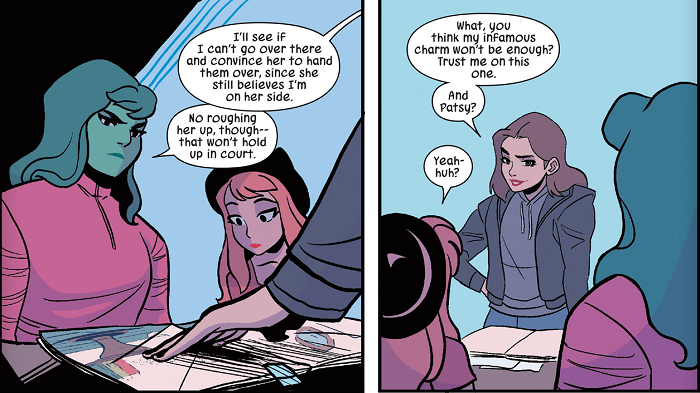 Leth gives us a great moment with Jessica, Patsy, and She-Hulk brainstorming their next course of action together. Pasty takes Jessica’s advice in getting herself out in the public to get her rep going again, but the real fun comes when they team up to do some spy shit together. Leth has Jessica come across as way less cynical and dark then her Netflix counterpart, but with the same wit and realist view of the world. These elements of Jessica compliment Patsy’s personality in their interactions. It’s really a fun issue to read and there are so many New York references as well (shout out to Hamilton). Don’t even get me started on Brittany Williams back at it again with the disgusting (in a good way) drawings.

Williams’ style is such a staple for this book; I love the way she draws Patsy shifting between wholesome and her anime-ish/cartoon-like anger, and you also notice the subtle ways she draws She-Hulk as well. She doesn’t accentuate all the muscles and strength She-Hulk has (as most artist do, which is fine) but rather focuses on her academic demeanor and softer features while still maintaining her presence of strength. Williams truly knows how to highlight details in her style that we don’t see other artists do. Her Jessica Jones just comes across cool as fuck, man. Flat out. That’s it. She draws Jones, Luke, and Danielle as that cool as a photogenic family.

This book is flames, man. Leth and Williams are a great team together and it’s going to be interesting to see the direction they take Patsy in, especially since the Civil War II tie-in is right around the corner.

9.2 Charges for Breaking and Entering out of 10