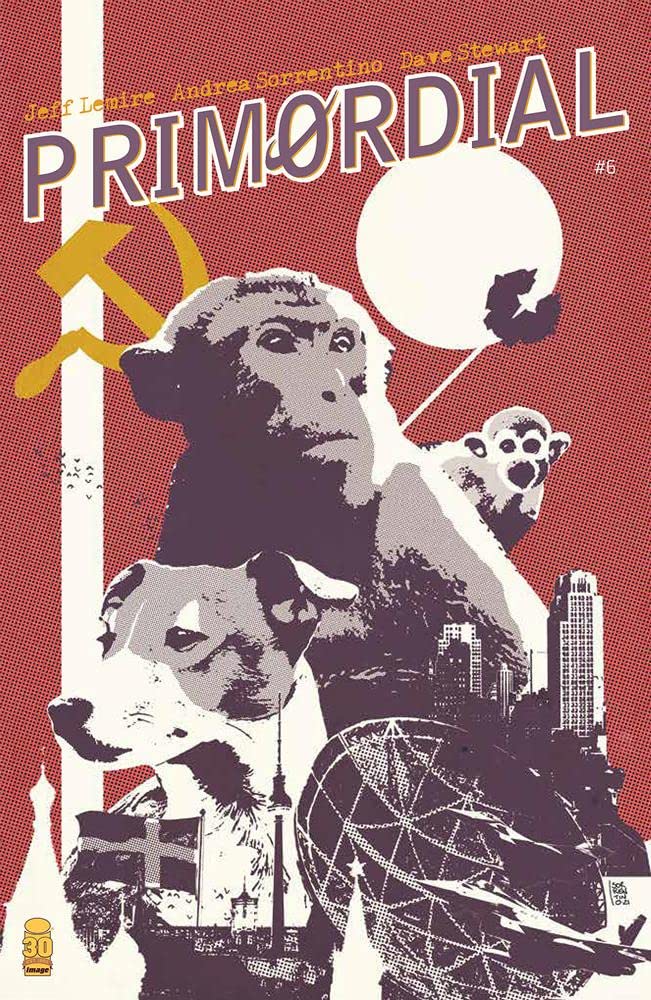 The capstone to the sci-fi, space horror mini-series that is Primordial #6 does exactly what I think it’s supposed to do. After reading it, I was instilled with a sense of wonder and reflected over the incredible journey that took place as the issues trickled out over the last five or so months. It’s not quite the definitive ending I was hoping for, but at the same time, it does provide the necessary emotional closure I want from a mini-series, and the spectacle was very much worth the price of admission.

At the end of Primordial #5, we saw the animal astronauts’ ship finally return to Earth only to be greeted aggressively by fighter planes which caused serious injures to Able, but he’s thankfully able to recover thanks to intervention from the entity.

What follows is what can be described as a wild trip comparable to the original last act of 2001: A Space Odyssey, as the crew makes haste to the signal that Yelena and Dr. Pembrook set into motion resulting in a lot of weird things that are best experienced first-hand, but it is also because it’s largely difficult to articulate in words.

Lemire’s sparse dialog provides just enough direction to the reader, but the bulk of Primordial #6 lies in Sorrentino’s absolutely wild illustrations. These are some of the most visually enticing panels and pages you may see this year, and it’s a showcase of perspective, color theory, contrast, and geometry. In more ways than one it is the spiritual anti-thesis of the incredible visuals of Gideon Falls, which had a much more muted palette outside of the sinister red. Primordial’s conclusion is bright, optimistic, and sharp. It just goes to show Sorrentino’s absolute range when it comes to speculative fiction.

I probably could have used a dozen more issues of this science fiction epic, but by that same virtue, the six-issue mini-series laid out an incredible journey through space and time, and I couldn’t really ask for that much more at the end of it.