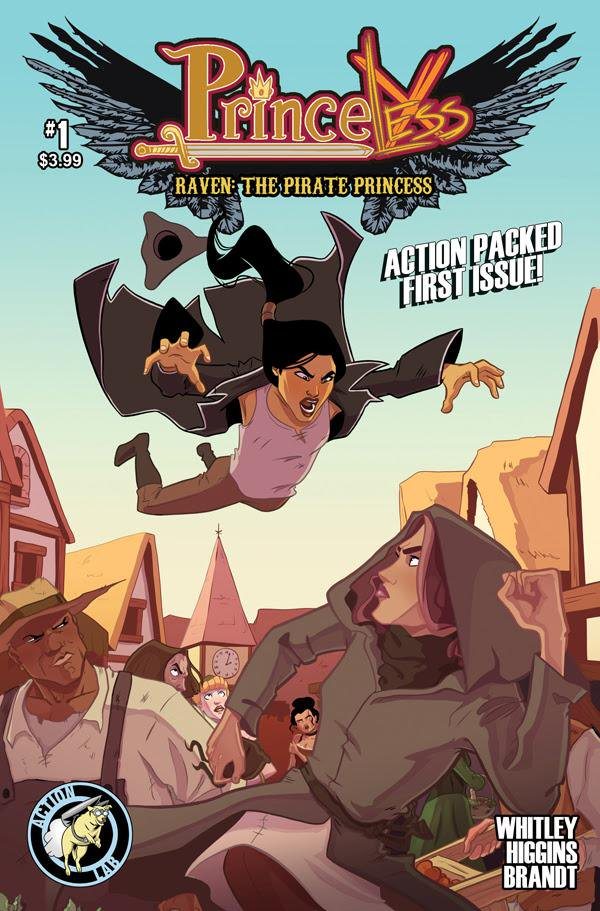 Oh my Glob, I was so excited for this to drop and if you’re a Princeless fan, you should be too. Raven, the Black Arrow, the great grand-daughter of lady pirate Ming Two Tails and the daughter of the Pirate King is getting her own series. And you better believe it that We’re reviewing it.

So this new series picks up with Raven, fresh from leaving Adrienne and Bedelia (see what those two and Sparky are doing here) with a ship all to herself. No crew. No first mate. But a desire to get back what belongs to her: her rightful place as heir to being the Pirate Queen. Look, we have another adorable flash back scene of younger Raven when times were great, when her dad took her with him to catch some fresh air and do some pirating. It’s a refreshing thing to see him in comparison to Adrienne’s dad, another king farther away who does in fact care if his children have activities and hobbies that aren’t traditional accepted for their gender.

But that of course, was years ago. We did originally met Raven in a tower, shoved away in this so called damsel in distress mode, all thanks to the deception of her older brothers whom he have yet to meet.  This issue is fast paced and a wild goose chase the whole way through. A single pickpocket leads to a chase which leads to more questionable activities and we start to get a better understanding of who Raven is: she’s a firecracker. She’s a cannon. She’s fire. She’s a near unstoppable force with a special skill set with a desire to get back what’s hers. My God, my God. I love Raven. I was sad to see her part ways with the girls but a solo series all to herself should prove to be great based on this issue so far.

Again, ACTION PACKED. All leaps and bounds and punches and kicks to places unkind. The action almost flows off the pages. The art is crisp and everything really just aligns perfectly here. We have here on our hands a really fun, really bold first issue here for Raven. It’s a great welcome back for Team Whitley/Higgins/Brandt as we get to see more of Raven and more of the extended Princeless Universe.