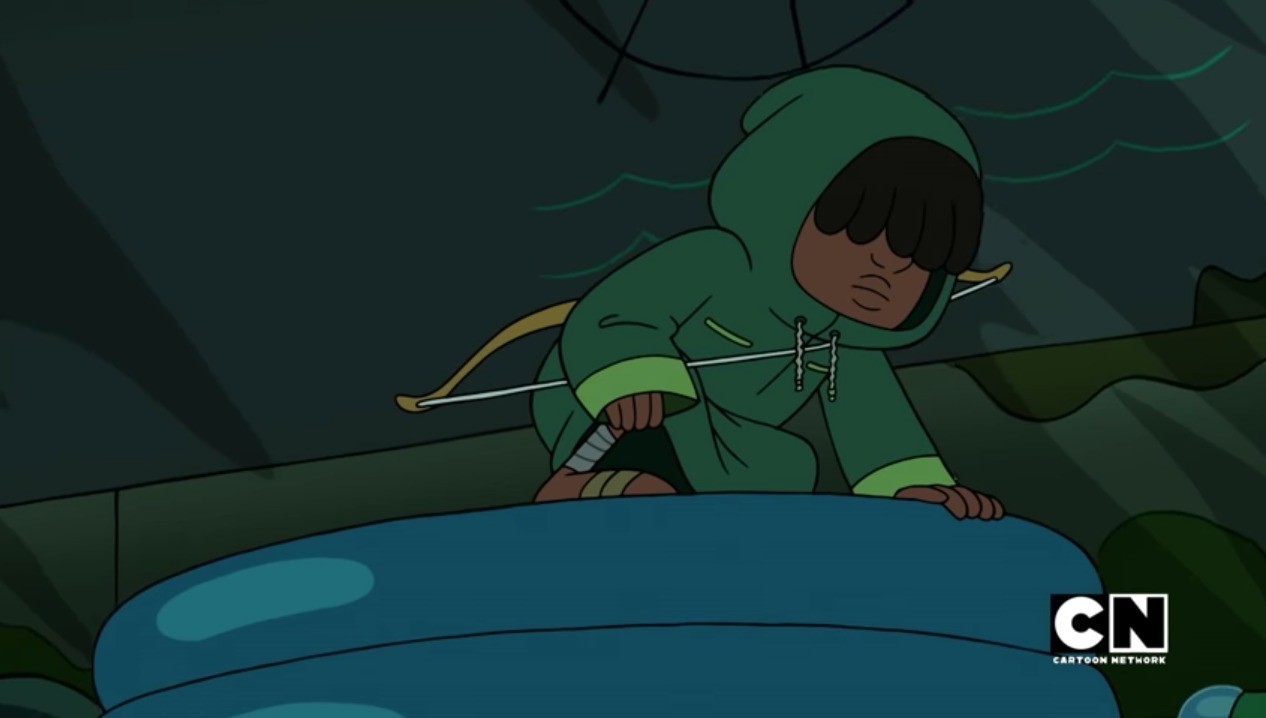 These adventures are hard, heartwarming, and hilarious all at once
1.3K Shares

I’m getting tired of telling y’all how great Craig of The Creek is. Please believe me, this is the show I was waiting for as a kid man. Lemme learn you right quick. I already talked about how diverse Craig of the Creek is and how the Creek is divided into different territories and gangs of kids. The girls obsessed with horses (Horse girls), the bikes kids, (Ten Speeds), and many more. Now there’s a lot of action on the show involves a mixture of Larping (Live Action Role Play), known battle rules of the Creek, and the kids on the show being wildly innovative with what’s available for weapons of choice.

Speaking of weapons of choice, here’s a fun fact about me. I love archery. Ever since I got to draw a bow and let an arrow fly at summer camp (that was still in the city) I have been hooked. There’s a book called Zen in the Art of Archery I had to read for acting class in college. It’s about breathing techniques to calm yourself during archery that can help you with performing. Archery is flames man. 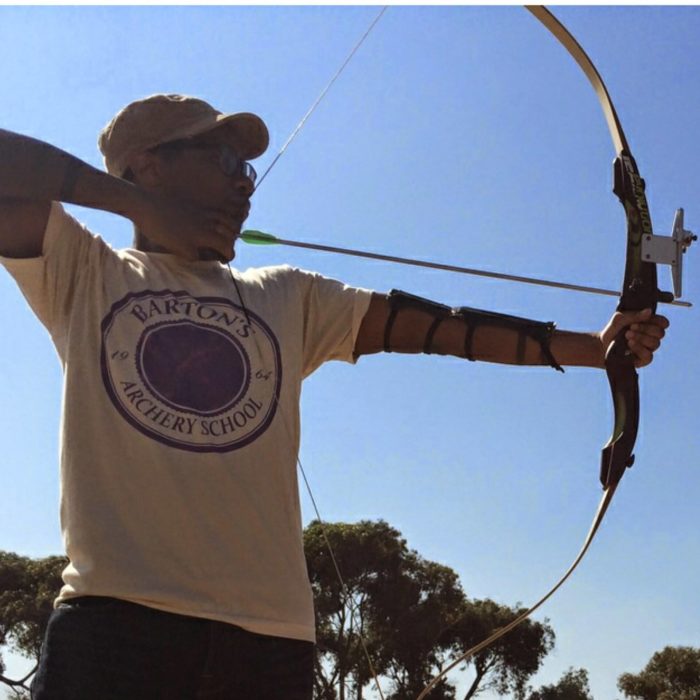 You can scoff or say it’s a lame weapon, or make a joke how Hawkeye is wack for just shooting arrows (Clint Barton’s/Kate Bishop’s series were MVP at Marvel Comics), but to me, it’s a weapon that takes way more finesse and skill than most. Archery has become more popular now in media (Not crediting Hunger Games for that) but you don’t really see many if any Black archers (shout out to DC Comics’ Connor Hawke) putting in that quiver work. That’s something I’ve always wanted to see.

So I’m watching a new episodes of Craig of The Creek (Under the Overpass), right. Craig and his friends (Kelsey & JP) are on a quest up the creek to find more Honeysuckle flowers (Since Kit at the trading tree’s business is booming, she joins them on their second venture). They find themselves in uncharted territory at a large overpass with strange symbols and pictures, where they run into this kid right here. 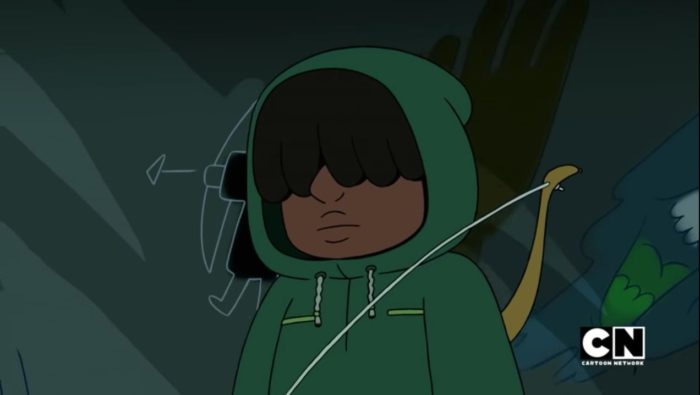 Woooooooo, who is that hooded Black boy rocking the longbow over the shoulder? I stood up in excitement when I saw this right here. This is all I’ve ever wanted in my childhood, man. I just wanted to see a Black kid dumping out the quiver. What I got from Craig of the Creek is so much better. We don’t know anything about this kid yet, or why he’s guarding the overpass. He ain’t got a name but I’ll tell you what he does have, the time today. This kid (dubbed The Archer Kid by Kelsey) said don’t let the long-range weapon fool you, I’m down for the up-close-and-personal.

The archer starts attacking Craig’s crew for reasons we still don’t know, but you know what? I don’t even care. The Archer kid got a bow and is rocking a raincoat, which may as well have been a Survey Corps cloak from Attack on Titan to me. This boy did not come to mess around with y’all and I was living.

“You have failed this Creek!”

Got that Scantron test ammunition on deck

Steady mobbin’ in the Robin Hood 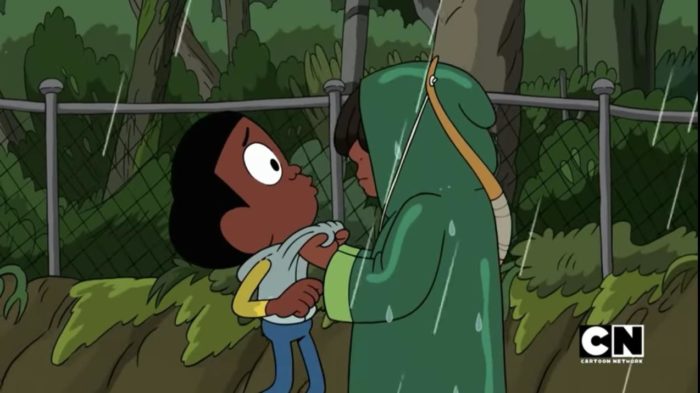 Fam, this kid was putting in work on the bow and arrows. I love that innovation, because obviously a kid can’t be running around with real arrows. The archer kid used scented arrows for tracking — and did you see that that bundle-of-pencils arrow? What?! Innovator! I can’t wait to learn more about this kid man. Your boy comes and goes ghostly silent. You see that look through his hair?! Flaunting that poncho running around in the Konoha edition ninja Nikes?! This kid is my new fave character.

The Archer Kid is a creative kid as shown by the type of arrows he’s using. That’s what makes Craig of the Creek such a standout show. The show is able to take action scenes and keep them innocent, yet still hard as hell and with high/dire stakes. The adult in me wants to say someone coulda lost an eye on those pencils but the Uncle in me is saying, “Let’em learn!”. There’s so much we don’t know about Archer Kid but that’s all I need to know to keep me tuning in. This lil’ homie is going to be the wallpaper on my phone for a good while.

All the strong female characters put ya hands up!

Can we talk about the strong-ass women on the show tho? I told yall before how Kelsey is the muscle of her squad. She’s a swordswoman who stays strapped with her custom PVC sword. Gawdly. Tell me you never pretended you used a branch as a sword in as a kid. Lie to me and tell me that. I’m 33 years old and still using a broom as a blade in the privacy of my own home (sometimes in public too, don’t judge me). Kelsey represents that and I love that the show has a girl being battle-ready and aware person of her group of friends.

Kelsey out here living for quests. That’s all your girl wants to do. Solidify that warrior name. She literally turns to the side and narrates her what she’s doing (in a British accent even for extra flare). Kelsey wants all that smoke. There’s an episode (Kelsey’s Quest) where the Elder Kids of the Creek essentially hire her to get a sword that was taken from them back from a kid named Jerry. Your girl wasted no time getting ready for the showdown!

Your girl a different animal and the same beast!

Fam, you see that training montage so you know it’s real? I still don’t know how her PVC sword was cutting through fruit (obvs Fruit Ninja reference) and you know what. I don’t need to know or care. Your girl is a swordswoman to the bone. Your girl got skill! Fam, Craig’s dad even put respect on her name seeing her kill that incline on the elliptical. When Kelsey meets Gary for the showdown, your girl gets shook off the strength and size of the sword home boy’s packing. Homie said Creek rules, first to lose their weapon is the loser! What? Who came up with these rules?! Is this the code of combat in the Creek?! What is this shooooooow?!

Jerry got that He-Man strenf?!

Jerry came out looking geek squad then flexed them bicep processors and dayum.
Yo, I need to know how many bodies Jerry got on’em with this sword.
My man in pink crocs ready for all smoke, I can not!

Did someone say, “Soooooooul Calibur!”

Kelsey with the Yoda footwork!

They hit the anime finish?!

I mean, come on man? What are we really talking about here? I love this show. Not only do we get to see Kelsey tough but we get to see her doubting herself (through her narrator’s voice) frozen in thought. Craig and JP helped out their friend by narrating aloud (with the British accent so you know it’s trill) to get her back in the fighting game. Kelsey’s swordplay isn’t for play-play as you just saw. Your girl got ill crossover skills on the hilt. Jerry even refers to Kelsey as a sellsword. Come on man, this is that backyard Game of Thrones, LOTR, Middle Earth blade work kids ride for.

Plus, Kelsey represents just one type of the array of female characters on the show. You have Kit, who runs the business at the tree. Kitt is smart, savvy, and plays an important role in the creek through her business. The leader of the 10 Speeds bike gang, and my personal fave Wildernessa. Wildernessa is basically an environmentalist/animal activist. Your girl rocking a teddy bear as a mask with a giant dog named Cheese Sticks. She’s a homage to Princess Mononoke…I mean, is there anything more to say? You want them strong female characters? Craig of the Creek got a whole buffet for you. 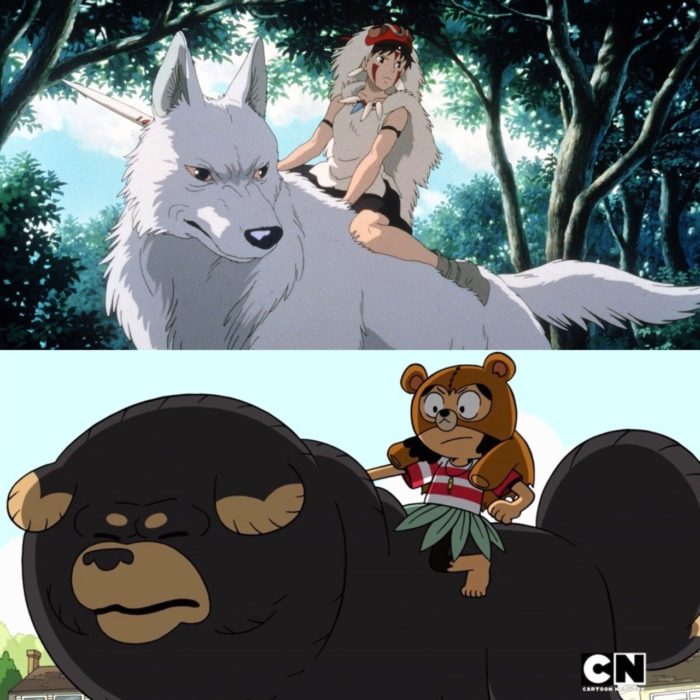 Racially diverse with strong female characters and lessons that laugh with you, not at you. Man, y’all going give Craig of the Creek its props. This is the model of what a kid’s show is all about. This is how you do a kid’s show right here. Adventure Time and Steven Universe got another successor off the strength of this show here. There are 20 episodes for y’all to catch up on if you aren’t already in the know.

If you wanna ride bikes with the 10 Speeds, build a giant mech out of cardboard, be a horse with the Horse Girls, hang out in the library with Stacks, or declare war with the paintball kids; there’s a place at the Creek for everyone. The chief navigator Craig Williams (aka Map Boy) will help you explore all the people, places, and adventures the show has to offer.