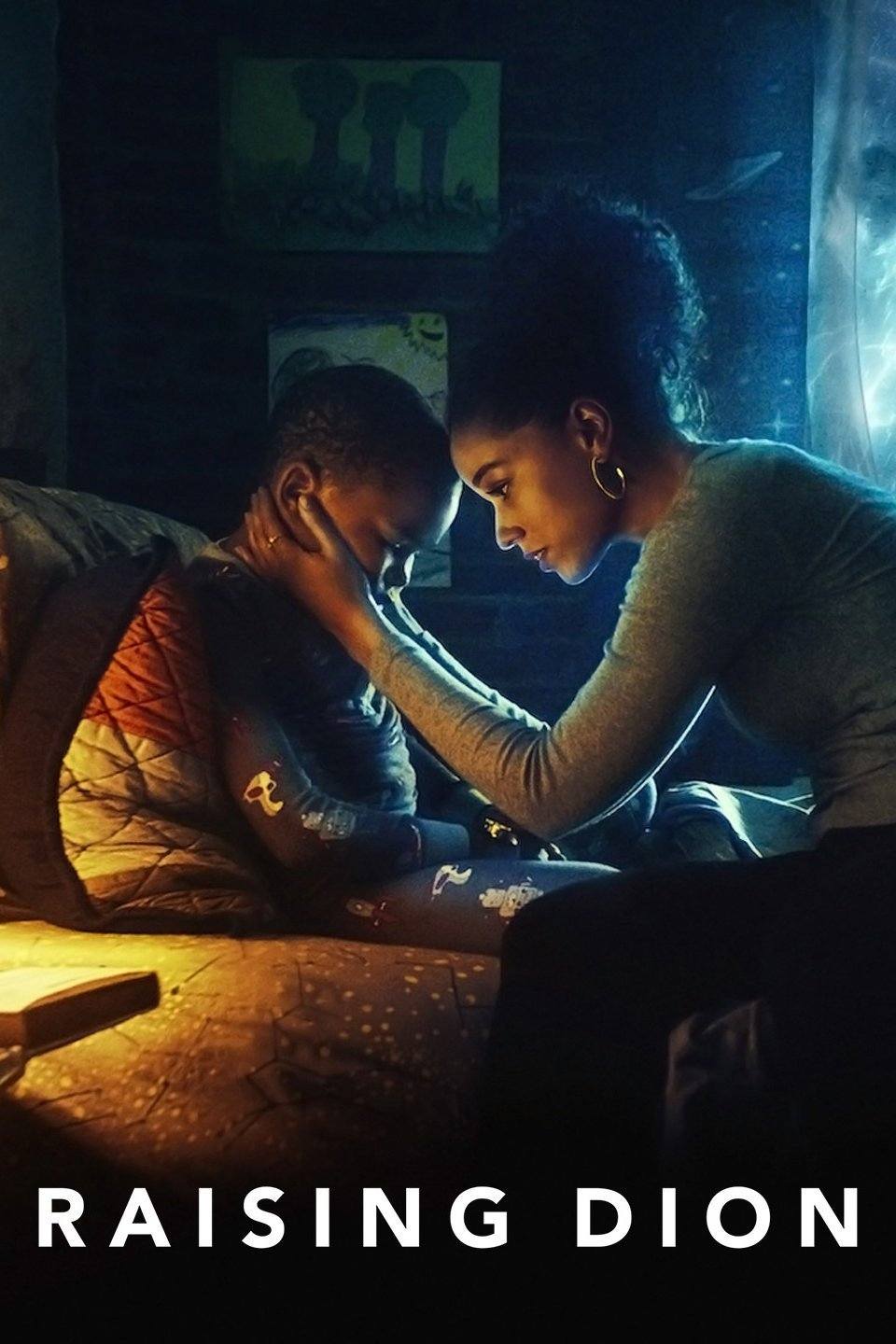 Let’s get one thing right. Raising Dion is a show that’ll be loved many, but my cocoa butter babies will be the ones who’ll definitely find themselves binging one episode after the next. And the best part is, the more you watch the better it gets. This show will send you on a roller coaster of emotions and expectations throughout the first couple of episodes, but it wastes nary a minute letting you know how much of a superhero show this is about to be.

Here at BNP, we’ve already gone over the premise of Raising Dion, so we’re jumping right into the details of this young heroes story. Off the rip Dion levitating his Fruit Loops and milk sets the tone for the quality we can expect for the entire series. There are so many scenes that showcase the seemingly high CGI budget. Dion pulling water out of the lake and bringing spheres of hydration to the floating fish so they could breathe?! Flames. The Nightcrawler BAMF! teleportation visuals are incredible. Every item that’s floated from one place to the next by Dion’s version of telekinesis was amazing. I expected good things when I saw the trailer, but those teasers are notorious for showing you all the really gorgeous scenes and disappointing you with the full production. Raising Dion isn’t that.

Now, if I’m keeping it a hunnit, I was ready to write the show off after episode 2. The season premiere does such a good job of drawing you in, introducing characters you have some investment in and delivering on the super powers that Ep 2 can feel like a drag. But then they went back into classic superhero origin story lore with the whole “use an object to help control his powers” thing, and we were back with that Megaman, firing on all cylinders.

Dion goes through the usual trials and tribulations of a gifted young hero, but this show doesn’t shy away from the fact that he’s Black. The scene with the principal who automatically labels Dion as the bad student is a good representation of this struggle that millions of Black children have gone through, no matter what their GPA was. The knee jerk reaction of finger pointing at the Black kid is a disgusting American trait but Raising Dion isn’t afraid to call it like it is, and does so in a well written public forum. We need more of this, especially in a show about a young superhero that millions of kids will learn from.

Michael B. Jordan hasn’t been mentioned much because this isn’t a show about him, or his character Mark Warren. Raising Dion is a coming of age superhero tale, but one done so differently that it’s nearly as refreshing as the first season of Stranger Things. What Michael B. Jordan does do, is allow us a look into the past. We see flashbacks to the days where he and Nicole were wildly talented, wicked smart and falling madly in love. We’re also blessed with insight into that fateful night in Iceland. Before having his life taken in a vicious storm out in New Orleans, Mark and his buddy Pat were conducting research for Biona, a company making headway on innovative steps in human advancement. It was this night out in the frigid Nordic tundra that changed everything for Mark and set the stage for Dion to come to life.

I love that they allow Dion to be a kid in this show. He makes funny faces, says “last one’s a rotten egg” left and right, enjoys really annoying shows, and loves a good dance party. On top of that, as the show progresses we’re introduced to his amazing friends that he has to learn how to appreciate. It’s not easy to write a good story where the main character is blind to the friend that he clearly needs, only to have them realize what they’d been missing out on. Raising Dion crushed it in this department.

Esperanza is a classmate of Dion’s that happens to be disabled. Like many kids his age, Dion doesn’t want to dead her and make her feel like even more of an outcast. He “tolerates” her presence until it becomes clear the skateboarding cool kids Dion thought were his boys clearly don’t give a rats ass about him. From there on out, Esperanza and Dion are an unstoppable duo. I am so proud of Netflix or Michael B. Jordan or whoever made that casting call because Esperanza is a phenomenal addition to this show.

On the flip side of things, there’s Jonathan. This is the classic enemy turned bestie that you never saw coming. Remember that altercation where Dion was automatically blamed and labeled the bad kid? Yeah that was a quarrel between him and Jonathan, but all that becomes a thing of the past once he’s added to Dion and Esperanza’s group science project. Slowly but surely, we begin to find out little bits of information that make us understand why Jonathan acts the way he does. It’s not explicitly stated but you can tell his home life isn’t the strongest and now being surrounded by these two, who have all the heart in the world, he gravitates to them like Dion to a Twix candy bar.

Can’t Hold a Good Show Down

While I wasn’t amazed at the season’s big bad, I was supremely impressed at the late season villain reveal. After speaking to a few people it seems nobody saw it coming and that’s an amazing feat this day in oversaturated superhero age. Alisha Wainwright, who plays Dion’s mom Nicole, does an excellent job showing an emotional range you wouldn’t expect from a woman who could probably play a high school student if needed. What means a lot to me is the fact that I’ve never seen a more widely marketed show about a single Black mother. Period. No matter what your stance is on the perceived colorism that went on from original short to Netflix casting, you have to appreciate that some version of a single Black mom is being represented.

Jason Ritter’s Pat becomes the Warren family’s rock as his best friend’s widow has one hell of a learning curve to overcome with navigating this world of parenting, powers and storm dodging. He’s also a nerd who knows a thing or two about superheroes so he takes on the wise mentor role for Dion and helps to usher in ways for the boy to grow and excel.

But forget about the actors making the big bucks, cuz that supporting cast is so on point I need to talk my shit right quick! Nicole’s neighbor Tessa is that building ride or die you couldn’t pay to be more helpful. Then we have the tall, dark, and handsome brothers at the dance studio where Nicole gets a job. Kwame is that character who’s always about to drop a sizzling one liner no matter who he’s talking to or what the convo is about. Rashad is Achilles in modern times (you know Achilles was Black right?). That man could turn a convent into a brothel in one visit. Dion’s teacher, Mr. Fry is that guy we all wish we had as a teacher.

Then we have my dark horse MVP of the season, Kat. Nicole’s sister is such an excellent character because she so damn believable in only like 3 episodes! She’s successful, beautiful, and holding it down for the LGBTQI+ community. Who wouldn’t think their sis is crazy talmbout “my son can move things with his mind”? Who wouldn’t do everything in their power to ensure their nephew is cared for, even if it means risking your livelihood? Who wouldn’t run to their sister’s side once they realize they’ve been acting like an unsupportive ass? I’ve loved Jazmyn Simon since she’s been crushing every scene on Ballers and her role as Kat officially solidified me as a Stan.

Raising Dion could’ve gone down the cookie cutter path and played it safe but instead the Netflix original challenged many societal norms and problematic behaviors. They didn’t give Dion an amazing supportive friends group like Eleven, they forced him to mature and accept people for who they are, despite their glaring differences and upbringings. There are also no traditional antagonists to be found here. The writers will keep you wondering until it’s time for your jaw to hit the floor and think back on how you didn’t guess right. Raising Dion is beautiful, magical, fun and exciting stuff. There’s a reason Michael B. Jordan headlined the adaptation of this comic and short film and I’m glad he did it right.