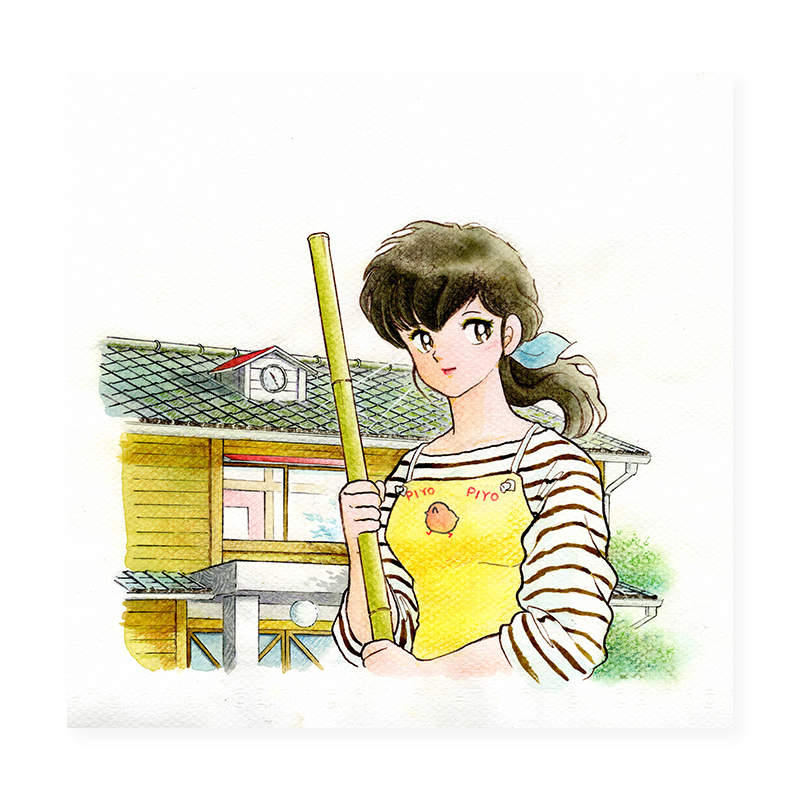 For folks around my age who came of age watching anime and picking up manga for the first time in the late 90’s and early 2000’s, Inuyasha served as a popular fixture thanks to its rotation on Cartoon Network on its Adult Swim lineup. Inuyasha was a gateway series for so many. Megan Thee Stallion has talked fondly about the series to the delight and amazement of so many of us Black nerdy folks who also enjoy anime. It was a series I adored once I entered high school and continued my love of “girl falls into another world or time” genre that I immediately loved when I first started watching Escaflowne back in middle school. (Which would help identify the path of figuring out what the isekai genre was which I LOVE to this day but that’s another story!).

But I knew that the look of Inuyasha looked familiar and the creator, the mangkai behind the series-her name looked familiar to. Then I remembered the assorted lot of floppies of Ranma One-Half and Mermaid Saga that I had read years prior. I actually still have some of them: randomly found issues in the comic book style floppies of those manga series that were pubbed in the 90’s that I noticed weren’t printed how manga was usually read. It wasn’t flipped to the way I know manga was traditionally read in Japan. I loved those stories, couldn’t make much sense of them since I reading issues out of order, but I loved the fantastic or fantasy element in them. I loved the magic. In Mermaid Saga, there was definitely a supernatural piece in the storytelling along with an element of darkness. For Ranma One Half–I could tell that there was a lot of hi-jinks, love stories, and confusion. And trouble with water, hilariously.

I knew there was a magical type feel to those stories which is what initially drew me to manga as a kid. A feeling of the fantastic, the otherworldly that I loved seeing present itself on-page. And on-screen whenever I watched the first gateway anime series as a young kid. I vaguely remember hearing about Maison Ikkoku many years ago but I wasn’t super intrigued as I vividly remember thinking at the time that it did not stand out or compare to being a cursed martial artist or being someone who accidentally ate mermaid flesh.

But here’s the thing: Maison Ikkoku is magical. In its own way. It’s rom-com goodness and I’m so grateful to be able to start reading the series now and appreciate it for what it is. It is a story of a run-down building of people all eccentric and noisy tenants and the new landlady, Kyoko Otonashi who is young, beautiful, and technically single and who brings new life to the party. One of the tenants that has a bigger spotlight is Yusaku Godai who didn’t get accepted into college on the first try, so he’s studying to retake the entrance exams.

But living in a dilapidated building full of folks who nickname him “Ronin”–poking fun at his status of being a failed student who just hasn’t gotten enough purpose of footing in life–he finds it hard to study in peace and get the results he wants. Now that a beautiful woman has moved in to become the new resident manager, Godai is driven to distraction and so is the rest of the house.

This manga is funny, light-hearted, and a slow-paced read. Very much slice of life–as there aren’t huge stakes like saving your kid sister from becoming a monster or saving the earth as we know if from menaces from outer space–the true conflicts come from the everyday lives of the folks living there like Akemi the young lady who works at a bar and often walks about at home in her nightgowns and underwear, usually hungover from a night’s work. There’s Hanae, the middle-aged married woman with a young son, who is the biggest gossip in town. Yotsuya is another resident of the shared building who is perhaps the biggest pest and mysterious one–not much is known about him.

BUT he’s always catching Godai in the strangest situations like peeping through an actual crack in the wall in their room and pushing “dirty magazines” in when the struggling student is expecting guests. Like I said there are personalities for days and with Kiyoko, the young, unmarried woman who is the new landlord–she finds that she’d fodder for the gossip mill, and someone new to be entangled in their lives. It is all jokes and silliness and then as I read on I found a really, endearing portrait of the different types of relationships present in the world, defining what the world family means and most importantly: figuring out your own path in life. Whether you’re considering what next to do career wise or considering starting a new romantic relationship with someone.

Drama, Romance, this series leans more into the master craft of Rumiko Takahashi and the brilliance of her older, beloved work that is being reprinted. I was worried that this series would be a bit dated as it was originally pubbed back in the 80’s. A shared house? People still live in those. Even in manga, I could instantly pull up a string of titles in the Shojo and Josei genres are recent and ongoing series like Shortcake Cake ( Viz) created by Suu Morishita and Kakafukaka (Kodansha) Created by Takumi Ishida.

I love how the story doesn’t solely move around Godai either, the more and more I read–the more agency and character depth I saw in women like Kyoko. Becoming less about his budding and awkward love and more about how he can become a better man, stand proud on his own two feet with ambition, and be worthy of someone’s affections. Kikyo’s character starts to grow too: she’s trying to figure out her next steps and what persons she should allow into her life in this new chapter of her life.

At more than 300 pages, the first volume is a two in one, perfect for long time fans and new fans alike. The Viz website notes that the rating is “Teen+”. Manga published by them in that category usually is more suitable for older teens and adults. For example, may contain intense and/or gory violence, sexual content, frequent strong language, alcohol, tobacco and/or other substance use. While there isn’t BERSERK level of gore and violence there’s a spot of nudity and lots of slapstick humor and situations that lean more towards adult humor. Certain humorous situations did not age well due to the slapstick comedic effect of male characters being slapped for their lecherous words and actions. Remember how exasperated you felt reading and watching Inuyasha‘s Miroku? YEAH. You’ll feel a bit of that exasperation here too.

A romantic comedy that blends in a little bit everything by Legendary manga creator Rumiko Takahashi, who was finally honored with an induction into the Eisner Hall of Fame back in 2018 means manga fans today get a taste of this veteran’s brilliance. Who is this manga for? The rom-com lovers, the “vintage” manga lovers and most certainly fans of Rumiko Takahashi.

8.0  Hilarious and Eventful Trips To The Beach Complicated By A Phobia Out Of 10

Read our other manga and anime reviews and coverage!