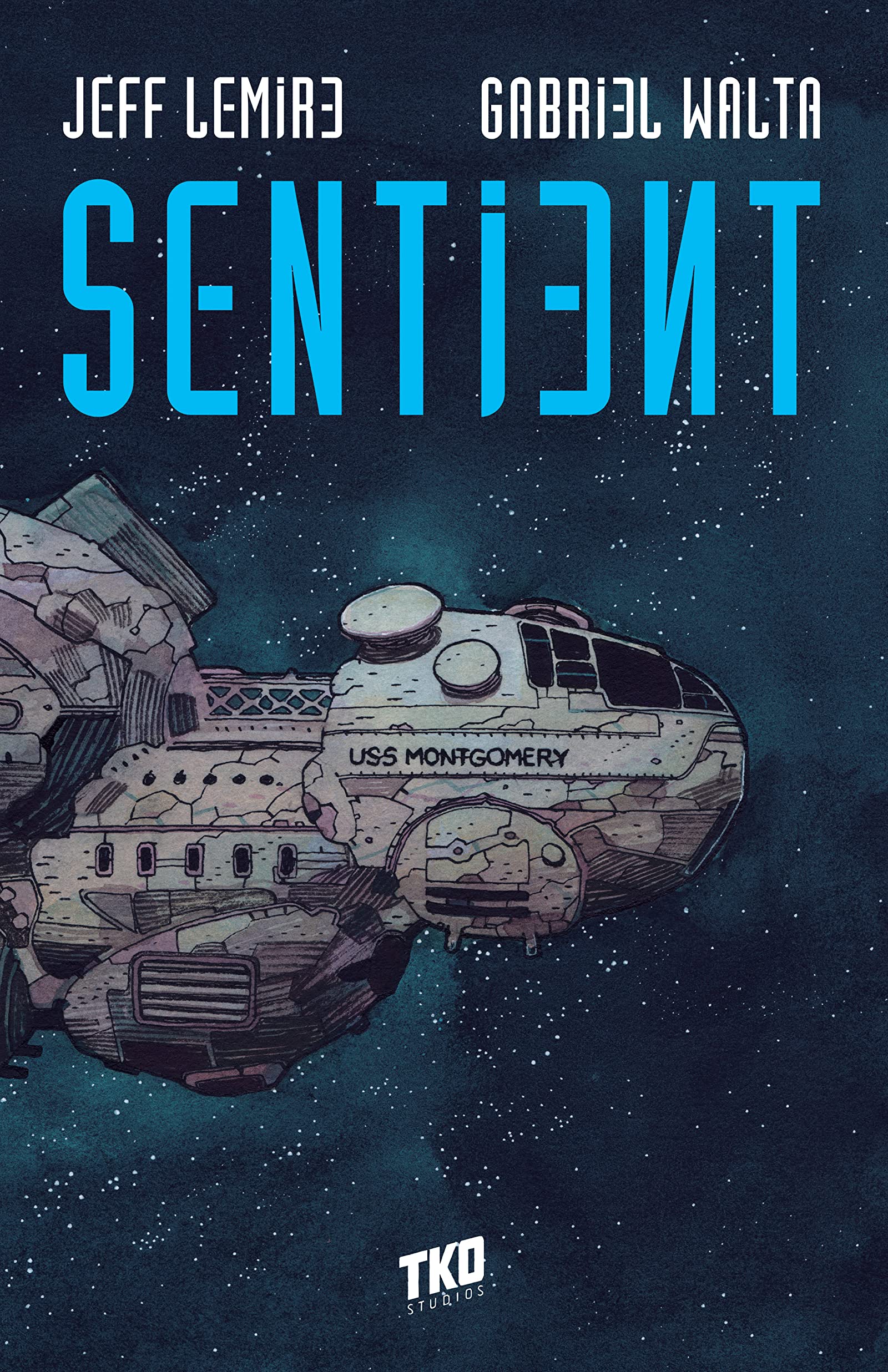 Before we can talk about the strange story that is Sentient (and I do honestly mean that in the best possible sense of the word), I do want to take just a brief moment to discuss its publisher, TKO Studios, because they’re doing some interesting things since they first announced themselves way back in December 2018. They had a veritable laundry list of top writers and artists listed as creative teams for their opening line ups. They offered the ability to buy their comics in six single-issues in a collector’s box, in trade paperback, and digital download. And because they were so confident in their product, that all of their first issues are available on their site. While I had had my copy of Sentient in my possession for a couple months, I didn’t really have the time until recently to give the book its due. And what finally prompted me to open up the book was the following.

TKO is out here doing the work. I love my local comic book shop and knowing that I can still support them during strange times is comforting. And that’s the last time I’ll be using that word for the rest of the review because goodness, Sentient starts with a very uncomfortable image. 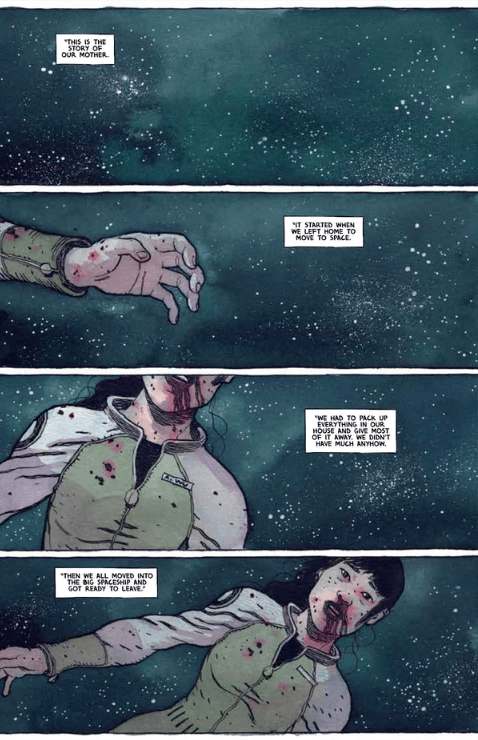 I have been a huge fan of Jeff Lemire for the longest time, so of course seeing that one of TKO’s flagship titles was a space horror that heavily featured an artificial intelligence was kind of a no-brainer that it was going to be the first one that I picked up. I’m glad I did, because Sentient lived up to its pedigree.

The opening page of the first chapter sets the dark tone of the series. A floating corpse of a bloody woman slowly entering the frame as an unknown narrator starts reminiscing about their mother, the home planet they never knew, and the ship that they call home. And we get some world building, the stakes are set and then immediately up-ended as we quickly see all of the adults of the U.S.S. Montgomery slaughtered, and the children aboard witness the retribution of the AI Valerie against the mutinous murderer and thus the true narrative of Sentient reveals itself. The concept of an artificial intelligence raising children isn’t entirely unheard, but Lemire’s dark spin on the narrative is entrancing. The horror elements of space survival are represented perfectly through the lens of the child and a robot who has to learn to be a caretaker out of necessity to continue the mission. Valerie is the AI of the ship and the central character of the comic, and we learn most of her from her interactions with the protagonists Lil and Isaac who for two very different reasons are the children most intrinsically related to Valerie. 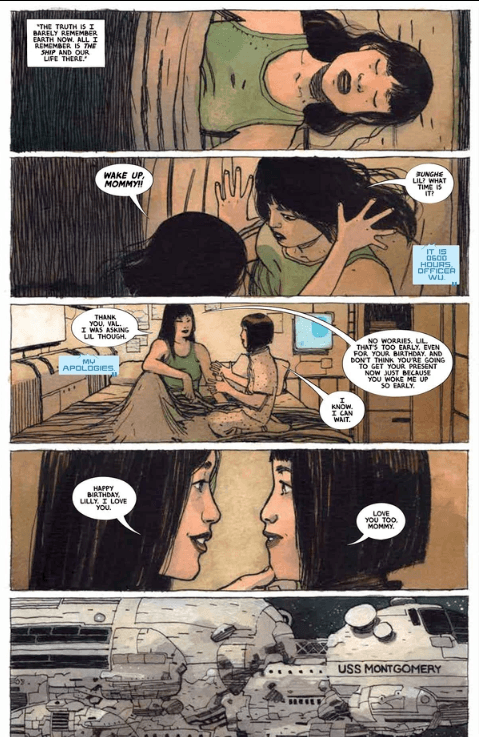 While the majority of the cast are just kids, this is certainly not a kid’s book. This is at least a hard PG-13 and more times than not bloody and brutal. Walta’s artwork is frightening in the best way possible. With the oversized hard copy I had, I could see each meticulous detail with perfect clarity. Each panel was expertly constructed and composed, and the strong visual language complimented the equally strong written language. The set pieces were perfect re-imaginings of classic sci-fi with a flair unique to the world of Sentient. The facet I appreciated the most though were the expressive characters and how just looking at their faces made me empathetic to their struggles and plight as they drifted in space.

Lemire and Walta told a tight story. They montage-d parts he recognized the reader would gloss over and lingered on the poignant moments and let the audience squirm at the visceral imagery. The dialog was crisp, and the characters made the entire world come alive. It didn’t reinvent the wheel, but it did polish it a lot. 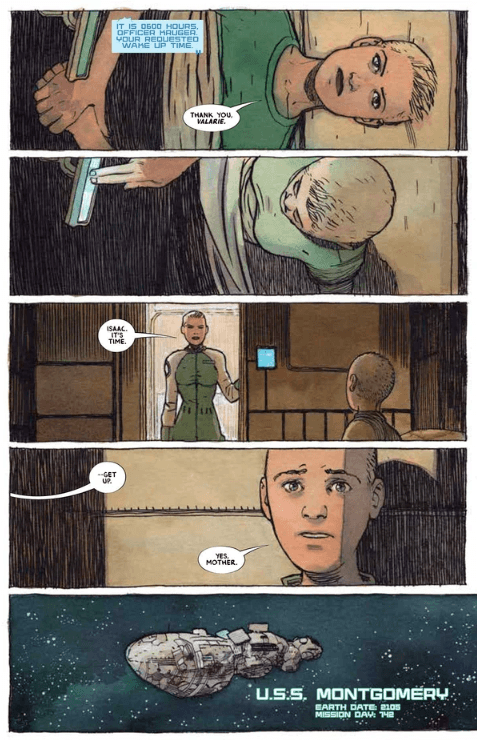 If you’re fan of sci-fi and/or horror comics, Sentient is so far up your alley and at this point so old that you probably already heard of it or own it, but let me implore you that if you haven’t picked up a copy: please, please consider buying direct from TKO Studios. You’re gonna end up with a staple sci-fi story from two master storytellers recounting a tale of survival and found family. And if you’ve read any of my reviews, you damn well know I love nothing more than a good found family story and this folks is a great one.