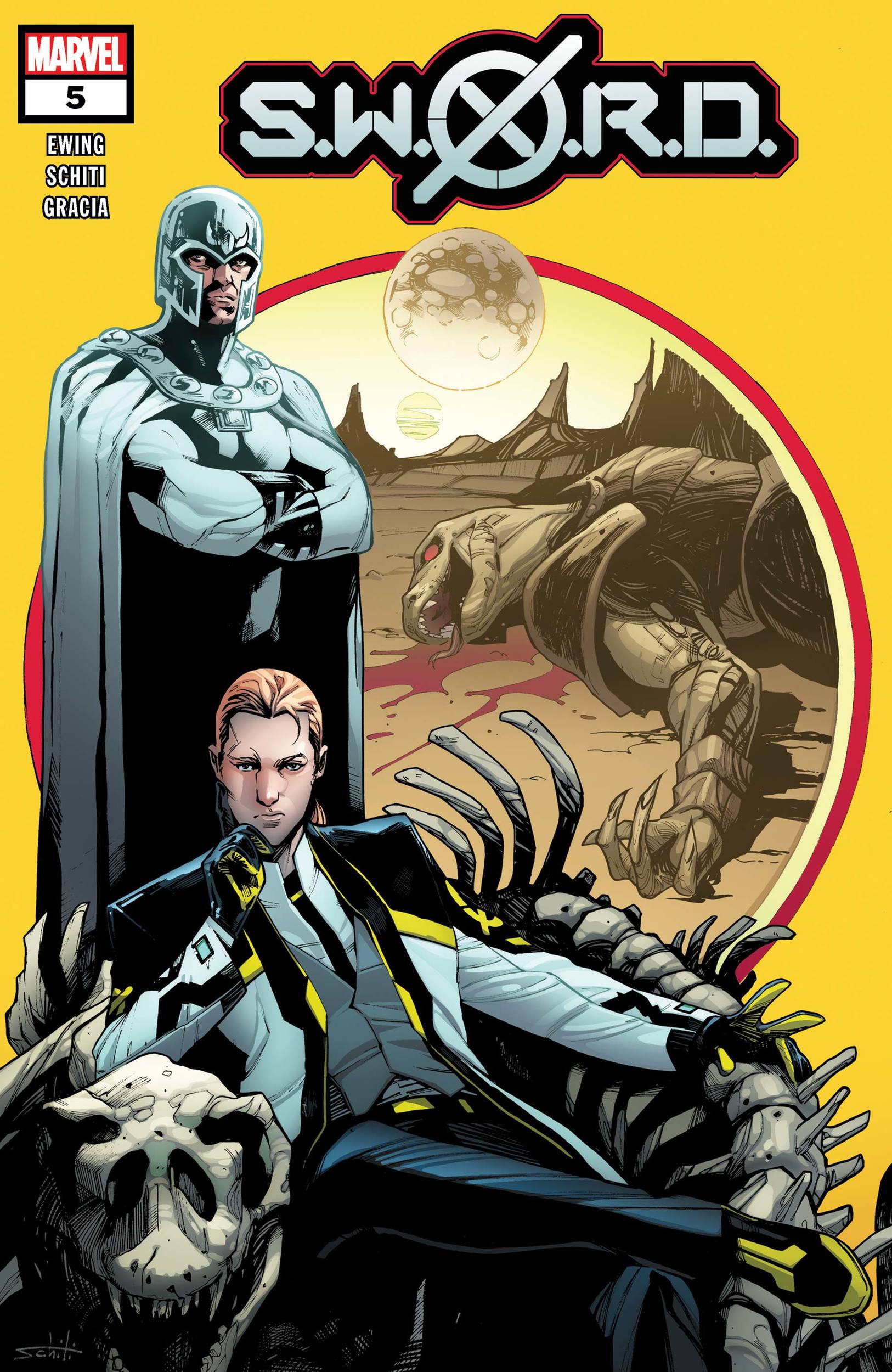 Al Ewing has been in the mutant Star Wars zone while writing S.W.O.R.D. and I’m here for all the intergalactic royal high drama, teleportation battles, and space adventures. S.W.O.R.D. #5 was no different, as was saw Fabian Cortez plead his case for a Krakoan era law amendment that would change the fiber of the mutant’s current reign, the bloody end of the Snarkwar, Magneto continue his top 5 dead or alive tour, and witness the first mutually beneficial Arakii mutant and Krakoan society partnership blossom before our eyes.

Issue #4 of S.W.O.R.D. ended with Magneto stating he and Fabian Cortez had matters to discuss. That final panel was accompanied by a data page email granting Cortez a meeting with the Quiet Counsel.

*Spoilers Be Ending Wars of Succession*

Upon resurrection it is made very clear this was not to be Fabian Cortez’ day. He’s brought before the Quiet Council, bucket naked, and covered in yolk like your plate after an eggs Benedict brunch beast session. With Abigail Brand and Peeper in attendance, Magneto comes for Cortez with the vigor of a high school senior belittling a 9th grader on Freshman Beat Down Day (oh you didn’t have one of those? Must be a New York thing). Fabian states his not terrible case for “Kill no human” to be stripped from the laws. All it took was Peeper to ask one question of his S.W.O.R.D. comrade and the ensuing “flatscreen” tirade showcased Fabian’s truly irredeemable heart, and the supremacy and bigotry still coursing through his expendable veins.

On the flip side, Magneto has one response to Fabian’s reasoning for detesting humans so. He has one response for the transgressions Cortez’ family showed him. Were those “scraps” you were given in the form of “barely six figures…property in Florida” worse than the Holocaust?! Worse than burying your wife and first born? We’re clearly cut from a different cloth. Do you see me out here talkin greezy or tryna give mutants a license to fade a homo sapien? No, I’m on my reformed genocidal maniac flow running a mufuckin nation of hittas. Yea, you thought yo ass was irreplaceable. Meet our newest associate, Khora of the Burning Heart!

Honestly, this issue was fantastic. Valerio Schiti draws the Zn’rx as well as the mutants. He does the Lawd’s work when drawing all of his landscapes, space, Hatchery and Krakoan Quiet Council meeting panels. The waterfalls in the background had me singing TLC while I soaked up Marte Gracia’s colors painted beautifully on each page. Don’t get me started on Al Ewing’s writing! Balancing the instances of cold blooded murder happening in unknown regions of deep space, with the ideology of murder as a guiding principal for mutants debate was masterful considering the one behind the Snarkwar assassinations, or the one delivering the fades for that matter.

While I completely believed Fabian Cortez would be revealed as the S.W.O.R.D. mole helping Henry Gyrich, it was even better seeing him be exposed as a Charlottesville Unite the Mutants grand wizard who can’t be trusted. Also makes you question the decision making of those who put him in such a powerful position among the Six. It’ll be interesting to see if this leads to the first Krakoan turned villain situation. We haven’t seen that kind of reaction from a Quiet Council decision yet and things have been awfully quiet on the mutant villain front. Will pulling the strings on the Snarkwar come back in a negative way? Anybody with a degree in space economics want to take a stab at what is Brand planning with all that Mysterium?

9 Lessons for an Upstart out 10