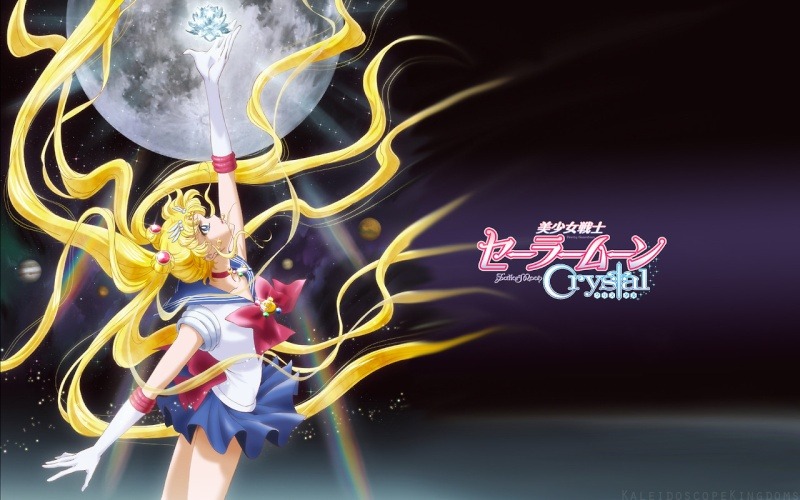 Here it is, the moment all of us secret sailor senshi have been waiting for—the premiere of the much hyped “Sailor Moon” reboot, “Sailor Moon Crystal.” The reboot hit the cyber streets yesterday, and of course I didn’t hesitate to check it out and compare it to the wonderfully campy original I grew up on.


[divider type=”space_thin”]
So the big deal with “Sailor Moon Crystal” is that it’s supposed to follow the plot of the manga more closely, but for now, it’s hard to see how that will play out, because the first episode of the new series is exactly the same as the first episode of the original. So it definitely gets bonus points for that, because so far, this is just a nice skip down memory lane.

The series starts with an introduction to Usagi and her astounding level of fail (quite literally in this case, as she scores a 30 percent on an exam). She meets Luna, who gives her the magical moon compact and helps her become Sailor Moon. We don’t get to meet the big, behind-the-scenes baddie (Queen Beryl) just yet, but we do meet Jadeite and his first henchman (youma), who disguises herself as the mother of Usagi’s friend Naru. The youma uses a jewelry sale to steal the life energies of a number of fashion-conscious women. (… Yeah, even now, that still doesn’t seem like the best villainous plan, but sure, we’ll go with it.) Sailor Moon does her makeup transformation, fights her first battle (with a lot of whining and crying mixed in, of course) and ultimately saves the day in classic “magical girl” fashion.

So one very obvious difference between “Sailor Moon Crystal” and the original is the glitzy, new 3D CGI visuals, and you get those immediately in the beginning of the episode with stunning, shiny shots of the universe. The character art, however, is a bit much for me, as many of the characters’ bodies—particularly those of the scouts—seem disproportionate. They’ve all been slimmed down, their legs are longer and their heads look way too big for their bodies. (In the words of a friend of mine, a fellow “Sailor Moon” fan, “Now they look like Bratz dolls.”) Someone get Usagi a sandwich, please. But despite that, you still really can’t deny the beauty of the artwork.


[divider type=”space_thin”]
Unlike the original, we also get introduced to Princess Serenity and Prince Endymion right away. The backstory of the lovers and the destruction of the moon kingdom is introduced in Usagi’s dreams. Personally, I would’ve preferred for the series to hold off on mentioning the backstory for a bit, just because the true identities of Usagi and Mamoru are obvious enough. We don’t really need to get beaten over the head with the princess and prince storyline, especially not so early on. Even the romance between Usagi and Mamoru is hinted at really early on. When they meet, there’s the usual teasing, but there’s also the implication of an initial attraction that draws back to the relationship they had in their past lives. Sure, it was always obvious that they would eventually get together, but when they met in the original, there just wasn’t as much sparkle and pop.

Oh, and can someone explain to me why in the new version, Mamoru, while inspecting the jewelry shop where shit’s going down, is standing outside of the shop in a tuxedo? In the middle of the day? Seriously, bro? Is that you being discrete? Either way, in both “Sailor Moon” and “Sailor Moon Crystal,” Mamoru is horrible at detective work and comically useless in general (throwing roses? That’s your big attack, Mamoru? I could call up 1-800-Flowers and have them do the same thing).


[divider type=”space_thin”]
Meanwhile, Usagi, voiced once again by Kotono Mitsuishi, is the same whiny, irresponsible spaz we all know and love. Only Usagi could cripple her opponent with her ultrasonic crying. (Did you remember that happened, fellow “Sailor Moon” fans? I can’t believe I forgot that.)

We also get some brief introductions to the other sailor scouts. “Sailor V” is mentioned quite a few times in the episode: news headlines bare her name, students gossip about her and Usagi plays a Sailor V video game at the arcade. Oh, and we get a glimpse of Ami walking out of the school near the end of the episode.


[divider type=”space_thin”]
Altogether, it’s a pretty great start for “Sailor Moon Crystal,” which looks like it should please old and new fans alike with its obvious show of reverence for the original material combined with flashy new animation. Sure, it’s still a little corny and still doesn’t always make the most sense, but it’s also still a classic. I’m looking forward to seeing what else “Sailor Moon Crystal” has in store.

“Sailor Moon Crystal” will be available on Hulu  (as well as Viz’s Neon Alley and Crunchyroll) every first and third Saturday of the month. It will run for a total of 26 episodes.