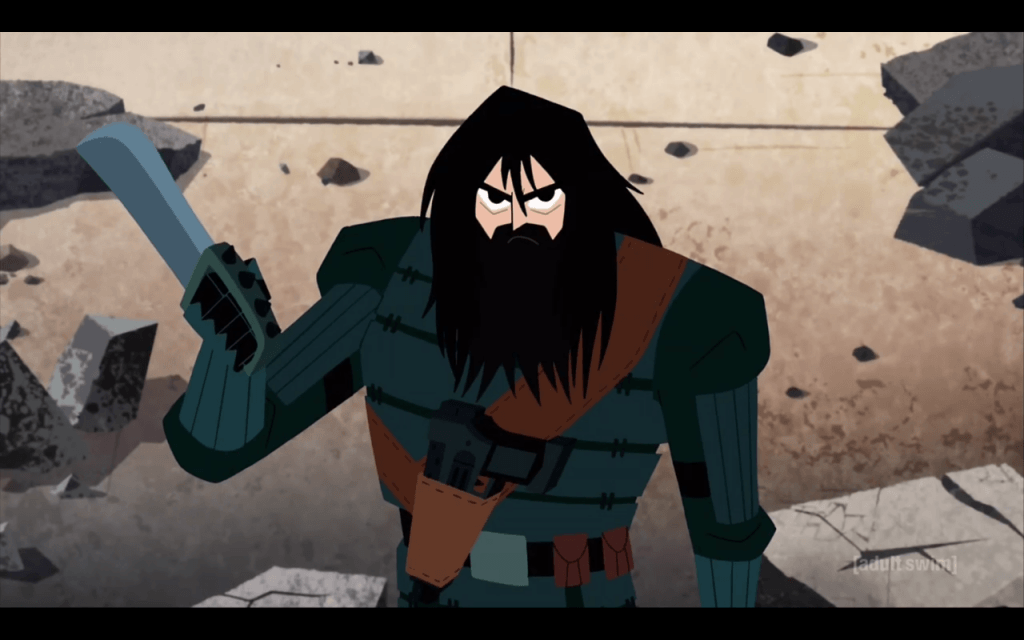 *Beat comes in* Yeah. Turn the caps up. Turn me up in the cap locks. Okay. Yeah. Ha-Haaaaaa. Cartoon Network you crazy for this one! Adult Swim I see you. All the way at the deep end baby, what up. Ayo, T.O.M. Toonami! Bet you Twenty grand I get this in one take!

*Hands in 6 God prayer formation* Listen, for thirteen years Samurai Jack left the fandom on a Whitney/Mariah high note with it’s final episode back in 2004. For thirteen years Samurai Jack bowed out the game. I’m talkin’ Exile. Retirement. Raised Jack’s Gi in the rafters with the greats. Samurai Jack let your fave shows on Cartoon Network eat. Ya man let Naruto eat. Ya man let all incarnations of Teen Titans Go eat. Jack even allowed shows on different networks to eat like Gravity Falls on Disney. Jack sat back and watched the next generation flourish, He allowed Steven Universe to teach yall muh fuckas ’bout this “Love is love is love” life. Jack fucks with Adventure Time messages and swords play. Jack cosigned every season of Young Justice.

Then somewhere along the lines, they got Samurai Jack fucked up. Maybe it was all these remakes of old classic shows coming back as half-ass television or trash movies. Maybe it was studios fucking up with the lack of diversity and paying homage. Maybe it was when they canceled Jack’s successor to realness Young Justice or disrespected Avatar: Legend of Korra over at Nickelodeon. I don’t know what it was but something made ya shogun snap and say, “Nawwww. Nawww, I don’t accept that.” Something made your samurai and dem tired of letting these unknown ingrates eat. Something made Samurai Jack realize he’s got some stuff left in the basement and a muhfucka is ready to renovate.

[quote_simple]”Now they doubtin’ my desire, second guessin’ my fashion
Like bringin’ of weapons of mass in when you question my passion”- Joe Budden[/quote_simple] 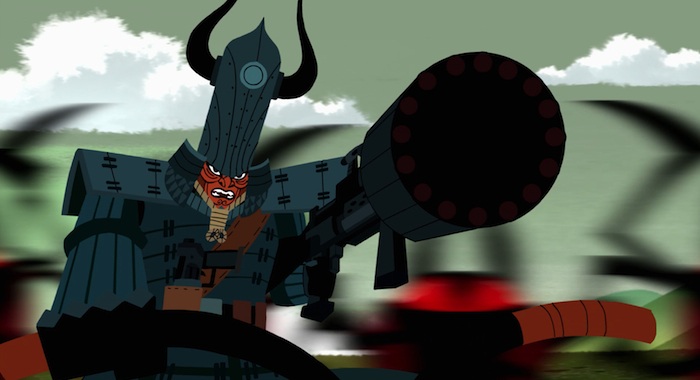 I’m telling you no fucking lies right now. Samurai Jack came back on March 11, 2017 to finish his story and it was the hardest, grittiest, real rap raw hood come back in fictional history. You might be like, “It’s way too early to say all that.” and to that, I say, “Fuck your life and I know way too many cartoons here right now that I didn’t know last year. WHO THE FUCK ARE Y’ALL? You must not have been watching the same comeback I was.” Think of all the shows over the years that brought back their protagonist either in a new light for a younger generation or as a continuation of a story that already had a great close. We never had a solid ending for Samurai Jack and for thirteen years we were okay with that but then Jack saw Hamilton and watching Renée Elise Goldsberry’s Angelica Schuyler hit heartbreak note singing, “I will never be satisfiiiiiiiiiiiiied.” made him realize it was time to come back and finish what Aku started for him.

We were told Samurai Jack would be darker and grittier and folk got worried that we wouldn’t be getting the Jack we grew up with. The wanted that wholesome Jack back. They wanted that Kidz Bop Jack. You don’t get what you want in life, Fam. They brought your man back decked out in the God’s armor, kevlar’d the fuck up. Off the strength, Jack was up riding on a Bon Jovi edition steel horse. My guy, how you riding on the chopper while holding a choppa (gun) doe?! Rocking a fucking a tengu mask and letting the oowop (another gun) bop. Then we see Jack got the fucking 10 O’ Clock silhouette on his face, hair grown out to a mane cause ya man done seen it all and been through it all. This is 50 years later an Jack isn’t the same, for us in real time it’s thirteen years later in the fandom. We aren’t the same either. Jack done lost his sword, and although that sucks we get to remember how much of a capable fighter he is and all the styles he’s trained in.

Ya man was rocking a multipurpose rod that’s a damn staff, trident, and tazer all in one. He got two ninas (you guessed it, guns), metal armor that metal bends into shields on some Kuvira shit, and then the Asuma’s trench knives. Ya man whipped out Asuma’s trench knives using no chakra just muscle. I said no chakra just muscle up on an assassin that’s clearly an homage to Sammy Davis Junior and jazz. Even in the midst of a life and death fight you still get put on to the culture? Are you kidding me? What the fuck you thought it was supposed to be?!

Jack came back to give the fandom life. Not only that but because Jack lost his sword, he’s at even more of a disadvantage now and is taking up his enemies weapons Mega Man style. Ain’t no god mode to this shit. Ain’t no cheat code. Your boy out here using the resources up so he can further invest in his revenge. That’s. My. Shit. Your fave could never and will never do it like the excellence of execution aka the most trill there is, the most trill there was, and the most trill there ever will be, Samurai Jack.

[quote_simple]”What’s what, who’s who, paranoid as usual
Grippin’ on my deuce-deuce, either way, a lose-lose”- Joe Budden[/quote_simple]

We can really see where the direction of the series is going and it’ll have 10 episodes that will do more to close it out than any series could. We’re not only dealing with Jack’s journey home. We’re also seeing glimpses of what fifty years in the game has been doing to your boy. Jack’s been hallucinating about letting the home team down, and that’s a symptom of his survivor’s guilt eating him alive. He’s seeing not only his people suffering but also those he’s failed throughout the years haunting him as well as some warrior coming for his fade.

We ain’t ever seen the Iaido gawd shook like this before. We ain’t even seen this man scared of this type of fade before. This isn’t a Jack that was keeping his emotions in check. This is a Jack that got his emotions spilled drinking itself all over’em for years upon years. 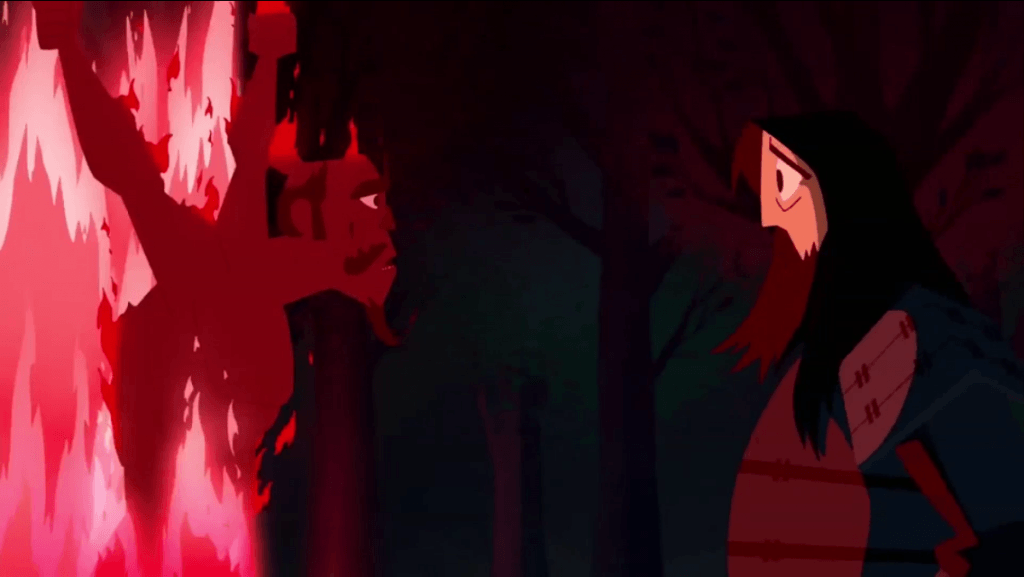 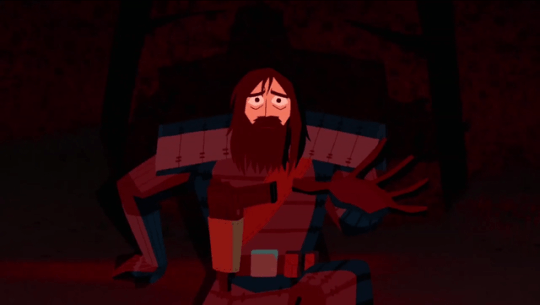 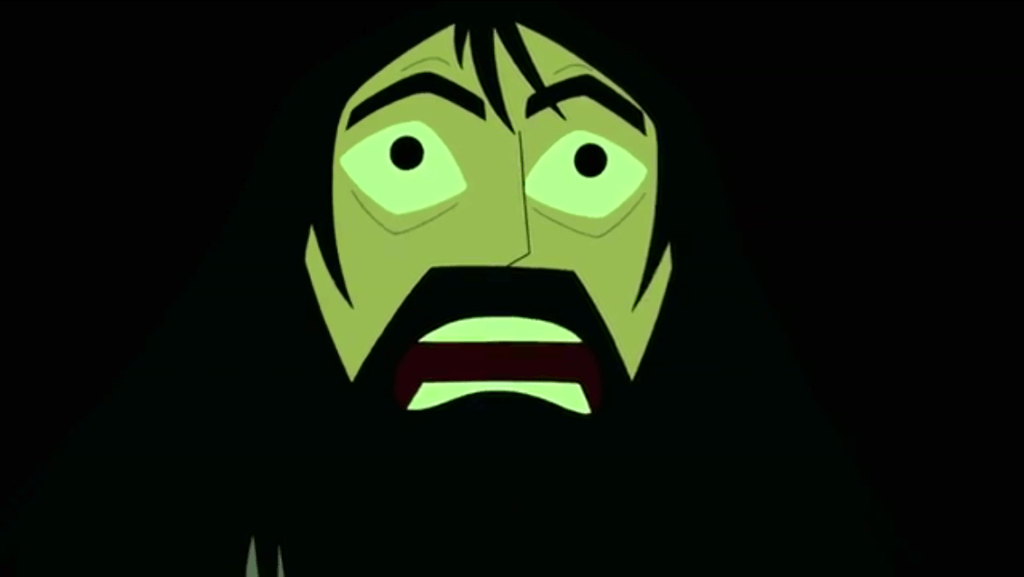 Jack is out here surviving man, and where there’s so much to unravel about Jack’s consequences for his fifty years worth of actions. We ain’t ever seen Jack break in the middle of a fight before but his trauma so real that it’s manifesting at the worst possible times of stress and even when he’s in peace. That’s how you fucking story, yo. That how you expand on character development after years of A1 plot for the hero journey.

Plus, on the opposite side we got children brought up as warriors for the sole purpose of taking Jack out. We got an Aku-fearing woman giving birth to seven girls all to be brought up and trained to kill Samurai Jack. You don’t hear me tho, there is no cut screen to their training. We see them being told failure is death. Taught to leave one another behind to fend for them fucking selves because weakness isn’t tolerated. One girl Ashi was just taking a look out into the world and then she caught hands for the “disobedience”. We’re getting real child soldier tales in this fiction man. We see how the odds are stacked against Jack and also this time facing enemies brought up believing that Jack is the villain all along.

My god, this is the most wonderful time to be alive for fiction. Listen, when we talk about comebacks. When we talk about Ali, Foreman, Jordan, we going to have to put Samurai Jack up there with the greats. I’m sorry Logan. Jack done went and murdered you. I’m sorry John Wick. Jack done went and put a portapotty on your grave. Overkilled you. All I’m trying to tell you is that Samurai Jack came back to show the competition how you do a proper return. How you put the culture on your back. How you put the fandom onto some true grime and muck shit. You want that gritty shit? then you must be wanting that Samurai Jack. You want that “there’s a war going on outside no man is safe from?” then you must be wanting a swig of that Samurai Jack (no Daniels).

Don’t talk to me about a Bast damn thing in these comments sections unless it’s about Samurai Fucking Jack. If you see me in the cyber streets, don’t talk to me unless we paying homage to the bushido god of this shit. If you see me at work by the water cooler, don’t approach me unless you talking bout Jack going first person shooter. This is the shit the culture been needing for the longest. This is the shit you broke up with your significant other for when they were talking bout “Aren’t you a little old for cartoons” because they were too fucking bland to recognize greatness. To recognize that Samurai Jack is a series that don’t do no weakness. Samurai Jack dunno no weakness. Jack only no streeeeenf! He only know Streeeenf!

From here on out you put respeck on Samurai Jack’s name just like adult swim did when they put’em in the old school black and white Cartoon Network logo. That’s G shit. That’s kissing the fucking ring. That’s letting mother fuckers know Samurai Jack is old guard, old era, and still killing you rookies. That’s reminding these mother fuckers where this shit started. That’s reminding mother fuckers who been letting them eat because from now on YOU DON’T PAY HOMAGE, YOU DON’T EAT. YOU DON’T CHARACTER DEVELOPMENT, YOU DON’T EAT. YOU DON’T PUT RESPECK ON THE SAMURAI JACK’S NAME, YOU. DON’T. FUCKING. EAT.