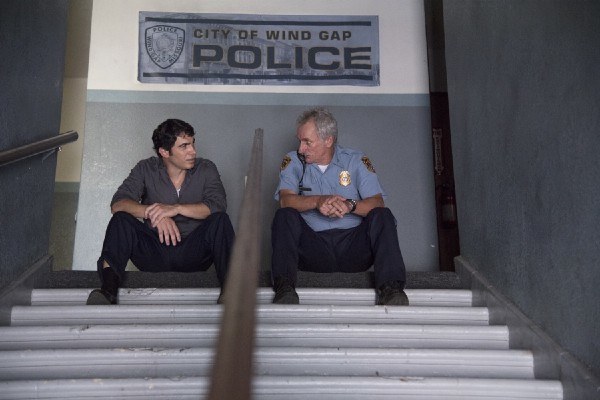 So here we are at the gates of the Sharp Objects finale and we need answers. As with all things Sharp Objects, I’m rooting for Camille Preaker to make it out of Wind Gap without further damage. I’m not sure what I hope for the rest of Wind Gap, but her? I want her to make it.

Camille arrives at the plantation after figuring out that her mother killed her younger sister, Miriam. Almost worse than that knowledge…her revelation that the town knew–or should have known–it was happening. Jackie requested an autopsy, and Adora had the girl cremated. A nurse told her supervisors and was fired. No one wanted to know. It was inconvenient. And now? Camille was sure Adora was playing out her sickness on Amma.

Camille remembers her sister: her funeral, their conversations about dying. She walks into a family dinner, a celebration of sorts. Adora proclaims that Amma is finally safe now that John Keene has been arrested for the murders. Camille is unconvinced, especially since Amma is sitting at the table looking fevered and pale.

In her half stupor, Amma is dressed like Persephone, queen of the underworld, and hoping that John Keene gets the needle for his crimes. She asks Camille if she’d be more sad if John died or if she (Amma) died? Is this family incapable of anything normal? Why is Amma dressed like the lead character in Dead Poets Society and weighing grief like it’s a finite commodity? Meanwhile Camille is eyeing the carving knife on the table (they’re eating ham of course) and her mom.

Camille breaks the…revelry to suggest that Amma come stay with her in St. Louis for a while since the town has been in such bad way. Adora is 1) not pleased and 2) not having it. So, she takes this opportunity to notice how horrible Amma looks and shuffles the girl away presumably upstairs for more medicine.

Camille puts her napkin down and steels herself then clutches her stomach and calls out for her mother. Adora tends to Camille instead of Amma which is what we have to guess was Camille’s plan when she faked her sudden illness. Upstairs, Adora allows Camille to lay down in the ivory-floored room. She gets in another floor-length white nightgown before getting into the bed. Adora takes that opportunity to pocket her cell phone and then hand spoons her some “medicine.”

The next morning, Amma emerges from her bedroom to stare menacingly at what I think is a pair of paintings by John Frederick Kensett (or at least I’m pretty sure one of the paintings is his)

Across town, Vickery oversleeps (a power outage) and is late to interrogate coerce John. KC has already started without him. KC does not seem pleased by the chief’s abrupt entry into the conversation. He wastes no time revealing that Ashley is the one who gave him up. When the cops reveal that there was blood evidence in the house, he breaks down. His sister was killed where he slept? I’d lose my shit, too.

After the interrogation, the two cops contemplate how long it will take for John to crack. KC still seems to have his doubts despite the angry lecture he delivered to Camille in the hotel room. Vickery seems sorry that KC found Camille like that, with John, and concedes that the girl gets it from her mother. “It” not being severe and repeated emotional abuse, but simply “a need for attention.” So… yeah, fuck that dude.

Vickery stops by the barber shop to get pretty for the local news crew which are inevitably on their way now that the killer is in custody. Alan, too, wanted a shape-up and stops by the shop, but leaves when he sees Vickery. However, before he leaves the two exchange barbs about Adora. The chief is like how’s Amma? I heard she was sick. Alan shoots back, yeah we’re passing something around the house. Hope you don’t catch it on your numerous visits to see my effing wife.

So a couple of things: if you are at your crush’s house enough for her broken horse of a husband to talk shit in front of another man (a barber so you know he gossips), you might want to rethink some things. But more importantly, if you are lying about passing some imaginary illness around your house to protect your wife, you might be an accomplice to attempted (so far) murder. What is wrong with this dude? How many of his daughters have to die before he says something–anything!–to someone?

Back in the Sick Ward

In the upstairs sickbed, Camille is [pick one: dreaming hallucinating remembering] and vomiting. Downstairs, Adora is in the kitchen preparing medicine when Alan comes home early. He says approximately one sentence o deter his wife from poisoning his daughter and step-daughter and then promptly goes to listen to his music.

Amma comes into Camille’s room just as the older sister realizes that her phone is gone. Amma isn’t as unsteady on her feet as Camille, so Camille tells the girl to go get Richard. I guess Camille can see that this is going very badly, very fast. Camille is in full on sacrifice mode; “go and don’t come back,” she says. On her way out the door, Alan sees Amma and stops her with… cake. I can’t with this dude.

KC is at the bar and still having doubts which manifest as him examining the walls of the bar: a deer head decorated with Christmas lights, a Calhoun day flier, a missing poster, etc.

At the plantation, Adora is bathing Camille and unbeknownst to either of them Amma is eating cake. Help is not coming, Camille. Adora is finally telling her daughter that she is a “good girl.” And since she’s agreeable, she also shares a heartwarming tale of her abusive mother in which grandmawmaw wakes a young Adora in the middle of the night and takes her miles away from home and…leaves… her… there. Stop the cycle, y’all. Just stop.

Her response to Camille’s vomiting is [you guessed it] more medicine. At this point, Camille has to know she’s about to die. But!

But there’s a knock on the door. It’s KC. Alan opens the door (after turning his music up) and… sends KC away with a lie: “she’s out with those girlfriends of hers.” Welp you got promoted from hapless to co-conspirator. What in the hell?

Meanwhile Camille is upstairs struggling to get to the door before KC leaves. Spoiler: her mom is killing her so she moves too slow. But KC does see her car in the driveway. And Camille realizes that Amma never left to get help because she literally stumbles into her room playing with her doll house and eating cake. Throw the whole family away.

Adora is downstairs crushing pills (and god knows what else) and ignoring Camille’s phone that is going off nonstop. We get a glimpse of a hand holding a phone and calling her over and over (Curry?) before we’re thrust into Camille’s memory of time with her sister.

She is still on the ivory floor, too weak to stand up, when Adora walks in with a tray full of her concoction, but before she can give them to Camille, Adora sees the red and blue lights on the walls that signal that the cops have finally arrive.

Cue Curry and KC rushing into the bathroom. KC sees Camille’s skin for the first time and is stunned backwards. Curry, the GOAT, covers her with a sheet because if this isn’t insult to injury then I don’t know what is.

While Adora is being helped into her high heel shoes (by her maid), KC finds a pair of pliers in the kitchen that seem a lot like a weapon one could use to defile the teeth of little girls. Still, Vickery is there for her trying to make her arrest as pleasant as possible. This enabling open-nose MFer!

At the hospital, KC comes in to fumble an apology to Camille–and to let her know the plier marks matched the ones on the girl; Camille is still unsure of how her mother could’ve pulled those teeth alone so maybe Alan? Hospital staff draw blood he hopes to use in his homicide case (Miriam).

In Curry’s home office, he reads aloud Camille’s piece about her mother’s trial and conviction. She questions again the rage one would need to produce the strength to pull all those teeth. Curry loves the article in which Camille asks if she’s good at caring for her sister because of kindness or because she shares her mother’s sickness.

Curry sees how caring for Amma has helped his reporter. But the thing is, we have like 10 minutes left in this episode and all the questions have been answered so… something must be wrong. And, oh my, how wrong it is.

The two leave Curry’s office to have dinner with his wife Eileen, Amma, and Amma’s friend (the neighbor from the montage). There’s a moment of tense exchange when the neighbor, Mae, mentions that she’s torn between journalism and politics. Amma claims half-jokingly that she’s just saying that to impress Camille and calls her a “kissass” under her breath. Amma says she wants to be an on-air personality and I’m reminded of what Vickery said about the women of Wind Gap: the are never satisfied with being normal. The conversation keeps going but Camille is caught by a word that appears briefly on Mae’s hand, “milk. Camille has seen words throughout the series, but this seems to be the first time our attention is brought to it since Curry brought the police to her mother’s house.

At bedtime, Amma asks Camille if she wishes she were a writer. It’s an odd exchange in which Amma is saccharine sweet. When Camille is gone and the lights are off, Amma stares at her doll house. The next day, Mae’s mom comes over to Camille’s apartment looking for Mae who is out with Amma. She lets Camille know that the girls had their first fight. Cool. Cool. Cool.

When Mae’s mom leaves a framed photo falls off the wall (like in an earlier episode). She grabs a glass of milk (like at the dinner that started this episode) and as she throws the empty carton away, she finds the quilt [upward inflection] the two young girls had been sewing during the montage. Camille open up the doll house to put it back on the tiny bed when something catches her eye: a doll is sitting in the open window. Looking closer, she finds a tooth under the bathtub. This homicidal chick really re-created the ivory floor with teeth from the two girls she murdered? What in the what? Amma comes in quietly and says simply, “don’t tell, Mama!” What mama? The mama that’s sitting in jail for your crimes and hers?

But that’s not all, because inter-cut in the credits is so much: Amma and her gotdanm minions strangling one girl in the woods and the other in John’s bedroom.

And another, Mae, against a fence.

Why the black girl? Why were there only like five black actresses on this show (only three characters) and one of them has to die? Did all the kids know? Remember in the Losers Day episode, one of the young miscreants Amma hung out with was in Adora’s living room because he wanted to see the house? How? When did she perfect her miniature tile-laying skills?

If you or someone you know struggles with self-harm or substance abuse, please seek help by contacting the Substance Abuse and Mental Health Services Administration (SAMHSA) at 1–800–662-HELP (4357). For additional resources visit www.hbo.com/sharp-objects/resources.

Need to refresh your memory? Check out our recaps of Sharp Objects here.