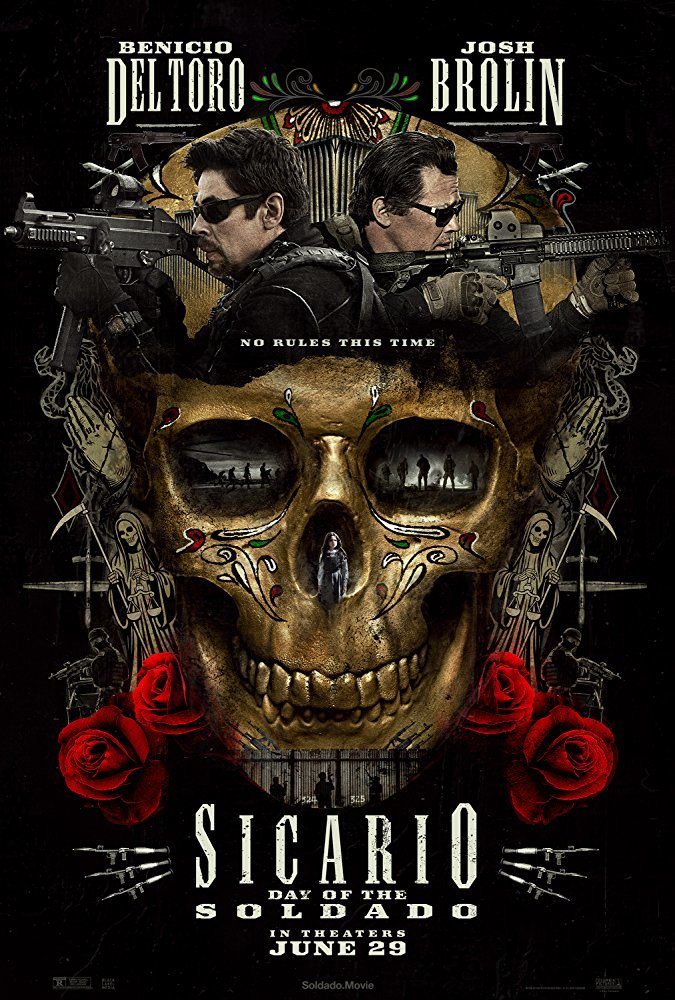 Sicario (2015) revealed a twisted, politicized grey area in global and American politics to audiences through the eyes of an outsider, played by Emily Blunt. With her view, the audience has a character with whom to commiserate espionage and the visciousness of the American military, while slowly learning individual character backstory. Through identifying the lesser of multiple evils alongside the character, audiences are able to justify awful actions and move forward in the narrative.

The change in director, from Denis Villanueve to Stefano Sollima, could have something to do with the change in feeling of the film. In reality, there wasn’t much of an emotional connection at all in terms of plot. Benicio Del Toro is the highlight of this film, but even with his performance of, “Alejandro”, the timing feels wrong.

With all that is in the news about immigration and the Mexican-American border situation, this film had the opportunity to delve into deeper waters. Unfortunately, there are no nuances in the actions that spark the plot of the movie. Propoganda featuring the American government’s favorite terrorism topics is featured in the first 15 minutes of the film; illegal immigration and Muslim extremists working together to bring terror to everyday American folk. This film could have explored these timely topics through a very unique lense. Instead, dogwhistle politics are used to stoke the fire of fears within “Middle America” creating clear, dangerous and extremely played out stereotypes that we just don’t need right now.

Without the “Othered” POV, this film has no moral center. There is no one to call bullshit on the sideways military ops, basically giving the devil free reign. While we get peeks into the lives of various characters, there is no emotional connection. The immigrants are faceless; the Cartel, haughty and invisible; the American military, overreaching and dishonest. By the time the movie is over, only “Alejandro” (Benicio Del Toro) has any sort of morality, which is saying a lot. His performance reflects the subtle shades the meaning of the film, as a whole, lacks. The best example of this layering is “Alejandro’s” knowledge of American Sign Language and the way it is incorporated in the overarching development of his character. That unexpected detail gives the character a richer meaning and allows audiences to connect emotionally with THE MAIN ASSASSIN GUY.

Day of the Soldier, Indeed

If there is a theme in this film, I would venture to guess that it’s right there in the title. The soldier, el soldado, has his day and his way throughout. Josh Brolin, Catherine Keener and Matthew Modine, while great at their craft, all play interchangeable soldiers of the system. Nothing their characters do is surprising or original. The Cartel members and the coyote smugglers are predictable and oversimplified. No one is likable or memorable, except young actress Isabela Moner, a breath of fresh air left with unresolved plot points. Lucky us, the film offered an opening for a part 3.

Well, at least we get more Benicio.