“Now you know. And knowing is half the battle!” That was the iconic tagline at the end of every episode of the classic 80s cartoon, G.I. Joe. Each week the Joes – a team of elite military heroes – would face off against the evil terrorist organization known as Cobra (gotta love that pro-military propaganda, kids!). But after watching Paramount’s Snake Eyes: G.I. Origins, the latest live-action G.I. Joe adaptation, I still don’t know if we’ll ever get the adaptation we deserve.

Written by Evan Spiliotopoulos, Joe Shrapnel, and Anna Waterhouse, Snake Eyes: G.I. Joe Origins serves as a hard reboot of the live-action franchise with a new cast separate from its widely panned (but commercially successful) predecessors. This time, we enter the Joe universe via Snake Eyes (Henry Golding). He’s a hunky-yet-brooding man earning a living as an underground fighter years after his father was murdered by a mysterious group led by a man with an affinity for dice. Believe it or not, that’s where Snake Eyes draws his codename.

After another bout where he obliterates the competition, Snake Eyes meets the mysterious Kenta (Takehiro Hira). The dubious Kenta recruits Snake Eyes for a dangerous mission in exchange for the location of the man who killed his father. But the arrangement leaves our main character caught between warring ninja clan groups, international terrorists, and scrambling to uncover the secrets his father took to the grave.

If any of this sounds familiar, it should. It’s basically the setup to every other hyper-masculine action film from the last 40 years:

ACT ONE: An angry loner whose only possessions are a dusty pickup truck and a raggedy duffel bag is haunted by the unsolved murders of his family and fights for a living.

ACT TWO: The walking rage machine meets a mysterious stranger who offers an opportunity to get revenge on those who’ve wronged him – for a price.

ACT THREE: Mr. Anger Management cracks a bunch of skulls and kills even more nameless extras before he either gets his revenge or realizes that there’s more to life than vengeance.

Snake Eyes: G.I. Joe Origin doesn’t break any new ground here, but it does try to dress up these clichés by sending Snake Eyes (do we ever learn his actual name?) to Japan. There he is dropped into an unfamiliar setting where he finds himself caught between warring factions. And to a certain degree, that change works.

With a reported budget of over $80 million, the movie boasts some gorgeous scenery and touches on various aspects of Japanese culture. Even the unrealistic and overproduced fight scenes still look good. Much of the credit goes to director Robert Schwentke (RED, The Divergent Series: Insurgent) and cinematographer Bojan Bazelli (The Ring, Mr. & Mrs. Smith). Together, they make Snake Eyes: G.I. Joe Origins something beautiful to behold. But that beauty is juxtaposed with somewhat clunky storytelling.

Maybe it’s the pressure of rebooting a beloved franchise, but Snake Eyes can’t decide what kind of movie it wants to be. It tries to give us a fresh take on an iconic character’s humble beginnings separate from the Joes, only to then court nostalgia by force feeding screen time for legacy Joes like Scarlett (Samara Weaving). Even the G.I. Joe organization is discussed by the film’s midpoint, essentially nullifying the independence of Snake Eyes’ origin story. Either approach could work if pursued in earnest, but the half-stepping between originality and nostalgia just waters down the film. And at 121 minutes long, that’s a lot of storytelling in need of tightening up.

While Snake Eyes gets bogged down at times, it does an excellent job of portraying characters who defy archetype expectations. Snake Eyes, the man, is frustratingly more hard-headed than your average hero-in-waiting. Tommy (Andrew Koji), heir to the clan that adopts Snake Eyes, shocks with stunning character developments of his own. And then there’s Akiko (Haruka Abe), badass Head of Security to Clan Arashikage and the unexpected heart of the core trio.

For the most part, our three leads are multi-dimensional characters whose competing agendas provide compelling drama. If anything, the film could have used some of its ample runtime to focus even more on their shared dynamic.

In all, Snake Eyes: G.I. Joe Origins is fun summer movie fare (especially considering the shitshow this pandemic has been), even if it doesn’t live up to its full potential. If it truly is the start of a new G.I. Joe franchise, then the filmmakers will know what the story’s strengths and weaknesses are. Because knowing is half the battle.

Snake Eyes: G.I. Joe Origins opened in theaters on July 23. It is available for streaming on Paramount+ on Sep. 3, 2021. 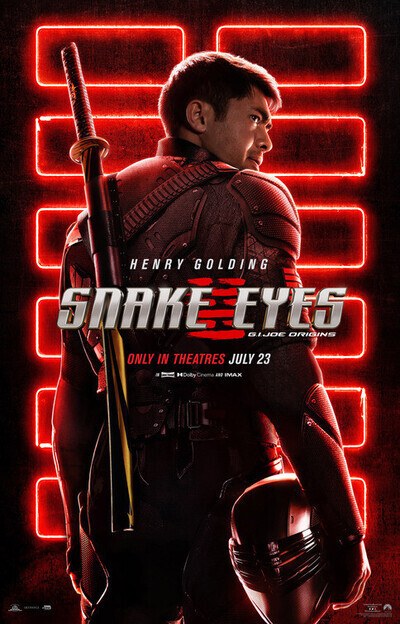