If you hate women, actively or passively, don’t watch Masters of the Universe: Revelations. You will hate it, go to social media with your misogyny, and get dragged (as you should). That said, MOTU: Revelations is a great addition to the 80s/90s nostalgia-train running through Netflix at light speed. Not gonna lie, Kevin Smith did the damn thing and truly brought the He-Man property into the twenty-first century. [There will be a spoiler-specific section, labeled, later in the piece.]

Masters of the Universe: Redux

First things first, this ain’t YOUR He-Man. Not by a long shot. So sit yo ass down if you think anything about this run of Masters of the Universe is going to allow you to return to a simpler time. It’s not. There are two Kevin Smiths, one before the heart attack running wild and saying wild stuff on Comic Book Men; and another, who recovered from a near-fatal experience and assessed his place in the world. The latter Kevin Smith wrote, directed, and was the showrunner for this. The clarity in the voice direction. The ability to make Prince Adam somehow likable while explaining why his humor (in either form) was (and remains) corny AF. Real touchstones. Along with Smith’s growth and humility is the ever-present sphere of influence that comes with being Kevin Smith. This brings me to my next point: the cast of MOTU: Revelations is stacked beyond belief.

If Smith had any favors, he called them ALL in for the voice cast. A mix of voice work legends and luminaries of the screen. Batman: The Animated Series alums Kevin Conroy and Mark Hamill, in the booth! Game of Thrones castmates Lena Headey and Liam Cunningham, Cersei and Davos on the mic! Sarah Michelle Gellar getting her Buffy on with Diedrich Bader in the building like Brave and the Bold was yesterday. Also, what Kevin Smith project doesn’t have Jason Mewes? Add Black Flag frontman Henry Rollins to the mix and the list of talent tapped to bring these characters to life gets as long as a timeline swipe and goes way back. All the way back. Back to the OG Masters of the Universe. Y’all. They got Alan Oppenheimer, the original voice of Skeletor, back in the game like Pacino in Godfather III! There is so much fan service in that choice alone to make this a legendary reboot.

MOTU: Revelations is right up there with the Netflix reboots of She-Ra, Voltron, and Transformers and the 80s nostalgia rabbit hole we’ve been pushed down. Which might be a good thing given how faithful to the cultures of their properties they were. More importantly, they took liberties that brought these fantastical worlds into the present-day sensibilities. The talent of Masters of the Universe elevated the story beyond nostalgia. Beyond a feeling of returning to what was. It forced the work to evolve into a story with the weight and heft of legacy. Which had to be hard to do, especially with characters named He-Man and Skeletor as key figures, but they get it done.

The fight animation is just two-dimensional flames. Fight scenes in Masters of the Universe are easy to read and dynamic, like, you really see gravity working in these frames. There are numerous fights that you can feel the force of. It gave a level of detail a few notches south of Avatar: The Last Airbender (there might never be a joint close to A:TLA’s caliber or intention). The action choreography was way better than I thought it would be. I felt like some of the fights in Voltron were pretty damn good, but MOTU surprised the hell out of me with a few of them. Man-At-Arms was just a problem with the hands, and Teela put the beats on everybody, so yeah. They gets busy. A lot of throwback villains are brought into the fold and most of them just end up as punching bags with backstories. It works though.

What really brings Masters of the Universe: Revelations home is the writing. Strange as that might sound, but it’s strong for a cartoon (refers back to the ‘He-Man and Skeletor’ line from a while back). No games played, there are plot shifts from jump. I love a departure from ‘the hero’s journey’ and nothing is more of a departure than killing the hero. In the first episode. Then again at the end of the fifth!? My jaw was on the ground both times. Moving Teela into the spotlight as the protagonist? Epic. Also caused a riot with the self-righteous and self-appointed gatekeepers of the culture. A lot like having a Black King Greyskull, voiced by Dennis “The other voice of God” Haysbert. Last spoiler, promise.

A right and proper sequel to the original series, Masters of the Universe: Revelations came to leave its mark on the game and walk away with the nostalgia championship belt. Callbacks were the order of the day. From the use of remixed music, shifted and mixed-up lore, and easter eggs out the wazoo, this five-episode season knows exactly what it is, and it delivers. Despite being a blast from the past there’s a passion in its design, in the acting, in the writing that takes the show to a different stratum. More than anything, Masters of the Universe: Revelations is a love letter to fans of the original that is well-received. By no means is the show flawless, but the intention is strong, and it lands most of what it throws down. Check this out with an open mind and a love for your childhood, if you haven’t already. 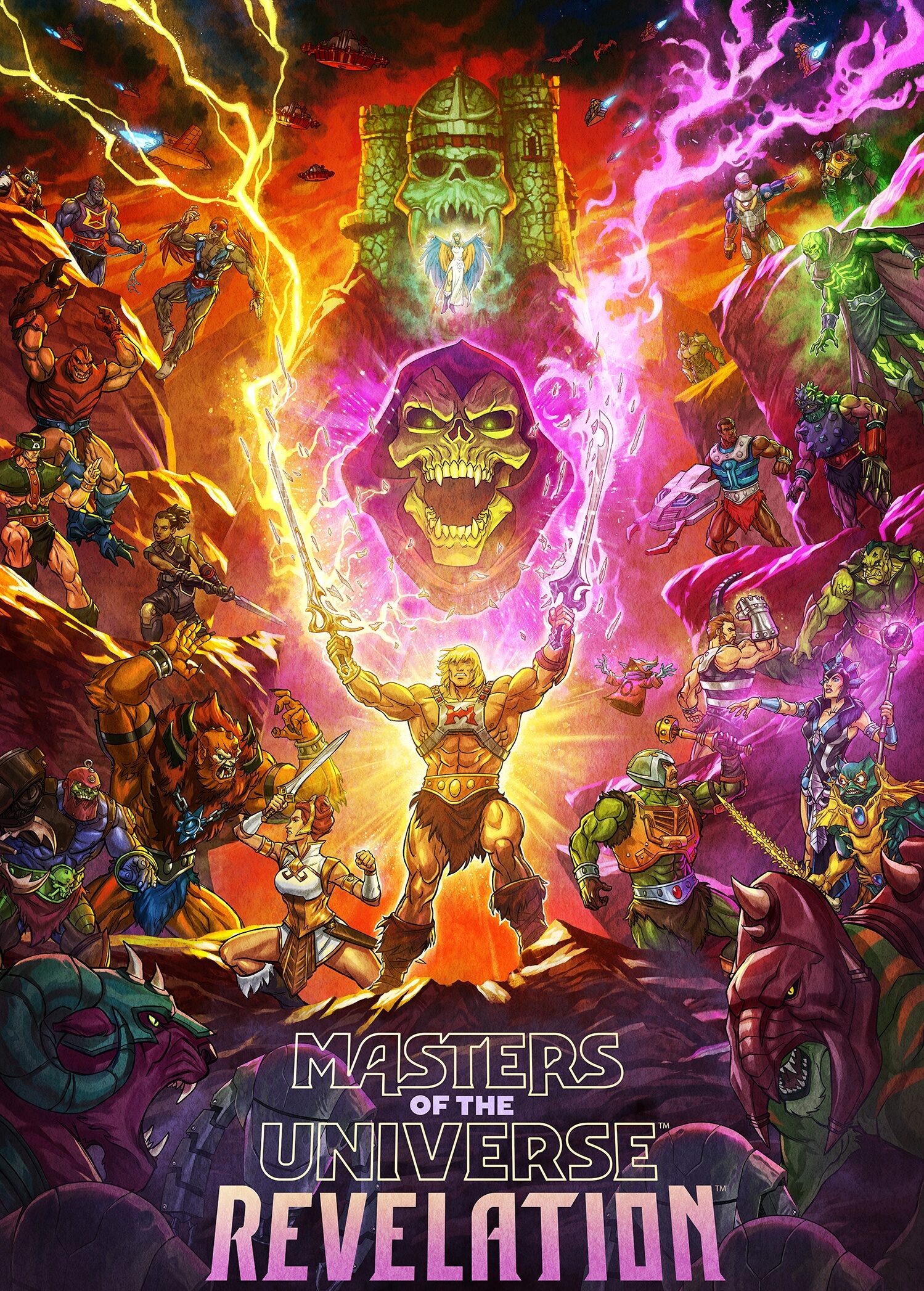