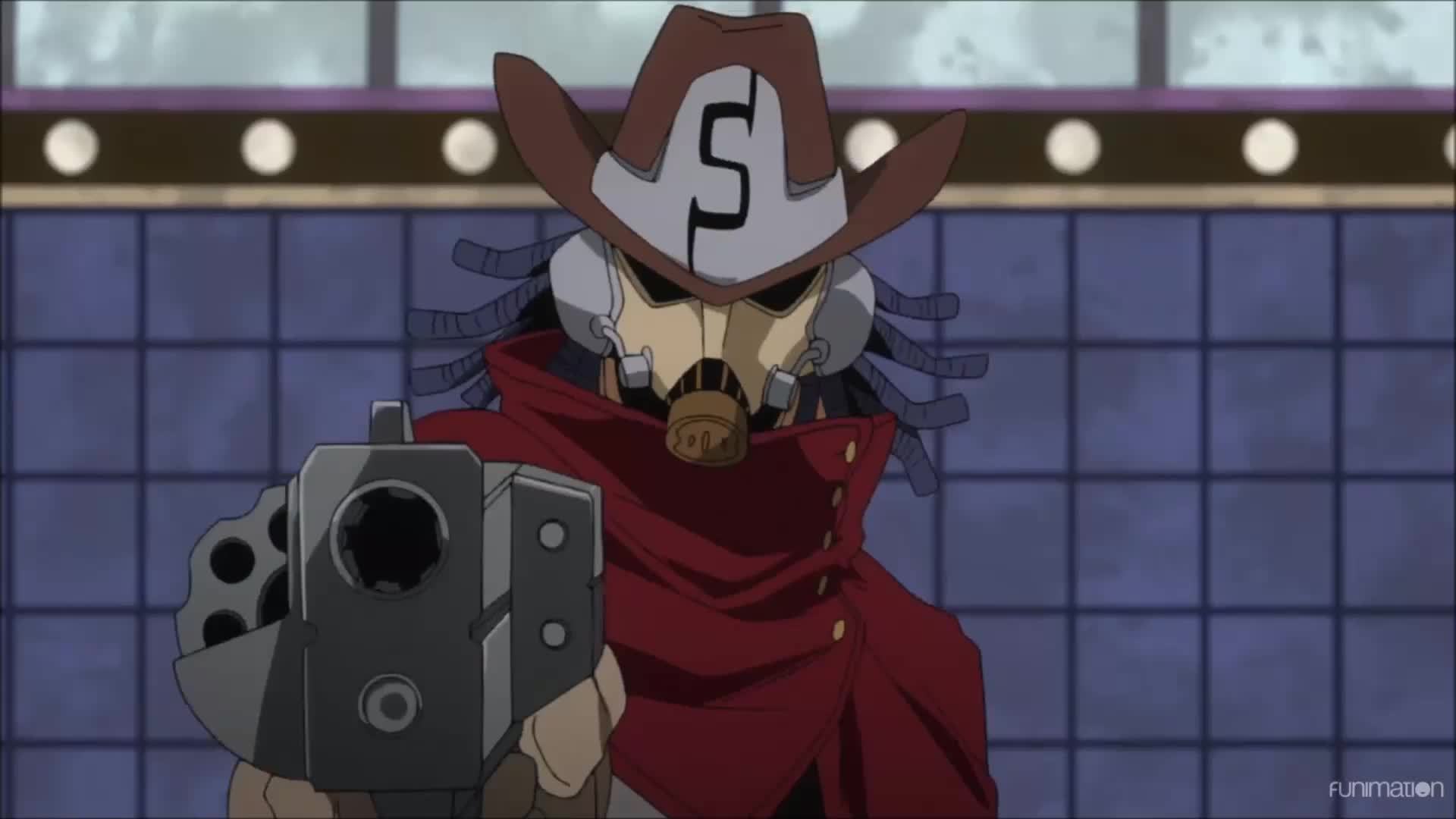 It took me a good minute to get into My Hero Academia. It’s always hard to start another Anime, especially one everyone is raving about. Everyone keeps talking about it in the Black Nerd Problems Slack too. I kept putting it off till a friend hit me with the words that caught my attention. “The main character, Deku, is a Rock Lee type.” Say no more. I’m sold. I’m fucking with the show. Young kids learning to control their quirks/abilities and being taught by heroes? Awesome. I’m with it.

Now, there’s one thing I’m still not over. There’s one scene I keep rewatching. It’s all the way back when the villains attacked the school. There’s a hero I feel doesn’t get enough credit in that episode. I’m not talking about Deku. I’m not even talking about All Might who showed up first to save the kids. I’m talking about Snipe. Snipe is that fucking guy.

Yo, let’s please not forget. Snipe came in to back up All Might like the rest of the hero faculty. The difference is Snipe showed up to show the fuck out. Fam, this man came in bumping Dipset and letting the nina ring. Snipe came for the smoke. All the smoke. Hoooooooo, my god! Can we please run that highlight reel back.

“‘Bout to fly the Desert Eagle for y’all people”

Lemme set the play for you. Deku linguinis both his legs leaping in to save All Might (who is weak af right now after throwing +1,000,000 hands) from the villains Tomura Shigaraki and Kurogiri. Kurogiri warps Tomoura in front of Deku to take his ass the fuck out. Tomura is about to use his quirk to make Deku’s face a straight up cavity as soon as he touches it. Deku’s is legit rush hour traffic in Los Angels/NYC Holland Tunnel fucked. Tomura gotta be thinking he P. Diddy in 1997 cause Deku has no way out. Deku’s like, “oh no!” All Might’s like, “Oh no!” and before the Kool-Aid man can say “oh yeah,” What happened? Tomura caught a bullet at the buzzer! I said, Hold up! These characters got mad crazy unique powers, so who out here bringin’ guns to the superpowers fight?”

First off, the shot was straight up Randy Orton (from outta nowhere) and hit its target. I’m already impressed. Secondly, it’s one thing to shoot a villain, but Snipe shot Tomura’s index knuckle out. Tomura going to need months of rehab just to try to use a mouse to surf the web. I heard that shot go off and saw the camera pan to dude with steampunk mask on, locks, what is that, a cloak?, and a cowboy hat looking like he just got done watching Tombstone. My first thought was, “who is this masked man, and why is he so nice with skinnin’ that smoke wagon?” However, before I could even finish the thought, homie let off two more shots?! What?! I thought My Hero Academia was for the children, and they got a dude letting the toast pop?!

Wait a minute, this hero just arrived, saved All Might’s ass and didn’t bother with a funny quip or banter when that camera came on’em? Instead, dude just licked two more shots and hit a villain 2 football fields away that was holding a student hostage?! What?! He hit that villain in both shoulders?! How you hit a man from beyond Steph Curry distance with two three’s to the shoulders? How you hit a man in both his rotator cuffs from behind the arch? Also, can we acknowledge the irony that this villain went sleeveless trying to show off his guns and then getting gunned the fuck down?

Who is this guy dumpin’ out the roof on these villains?! Man, that masked man is Snipe, and he is nice with the clips. His quirk is homing. It allows him to control the trajectory of his bullets. All of which is to say, homie is Max Payne bullet time with the tool. Listen, I knew Snipe was goin’ be a fave of mine cause dude is down for ignorance. He came through to shut villains down with nothing but the heat. My man’s ability is just licking shots! Snipe’s talent is gun butts and shell casings. I fucking live! Don’t let the non-lethal shots fool you. He’ll still leave the whole block full of lead cause he just don’t give a fuck. “Oh, your quirk ability is super strength? Bet your friends ask for you help when moving a lot, huh? Bullet to the knee. Oh, you shoot electricity? You must save tons on your electric bill. Bullet through the elbow. What do you do? Nevermind, don’t care. Bullet through both shins.”

“Come to wet the party up, and whoever in it. Got one gun that shoot for seven minutes.”

Yo, once them villains started getting washed something fierce, Tomura was ready to get gone and exit stage left till Snipe said, “Hold this bullet for me right quick. And this one. These two too.” Snipe had Tomura catch 4 additional lead zeppelins to the body. Tomura got hit so bad and so fast he vogued into a death drop. Tomura lookin’ like dude on Milton Bradley’s Operation board game. Snipe made Tomura Harlem Shake then pop, lock, and drop it. Notice how Tomura was talkin’ that Hot 97 Funk Flex shit when he arrived and turned real Z100 Elvis Duran and The Z Morning once Snipe shot the club up.

How Tomura the main villain and gettin’ lit up by a dude that’s a second-tier supporting character? Snipe ran up on Tomura like Wayne Brady with the choppa. Soon as Tomura spun and hit the ground, I shouted, “Rickyyyyyy” on instinct. Listen, you get take this level of Call of Duty wet work to the body, you might wanna rethink this whole villain thing. Snipe had that boy’s arms waving like the Carlton Banks dance with them shots. Tomura, yo ass got caught camping, fam. Your ass got caught clean with no beam, no scope. It’s a fucking wrap. The best part is Kurogiri protects Tomura from the rest of Snipe’s shots with his warping ability, but Snipe keeps fucking shooting anyway like…”Whatever, yo.”

“It’s obvious I hear you talkin’ loud! I’m clappin’ all day like I’m cheerin’ in the crowd”

*Dies laughing* This scene kills me every time, man! Snipe keeps shooting at these cats for a good minute straight spamming on their ass. Snipe screaming thug life and emptying the clip on’em. My man, goin’ Contra: Hard Corps on their ass and not letting the B button rapid fire go. He’s firing on their ass mad as fuck like he gotta miss Taco Tuesday for this. I just wanna know what song is going through his head while he is STILL shooting yo. The locs scream Diplomats’ Dipset Anthem but the hat says Bon Jovi’s Wanted Dead or Alive.

Yo, this guy Snipe is still bucking shots tho? Yo, how many clips has he gone through on these villains? I ain’t even seen him reload once! Also, keep in mind this guy is a teacher at AU! What class is this man teaching? Tell me Snipe is head of the math department. Tell me Snipe geometry quizzes be damn near impossible. Oh, he’s still shooting while I’m getting these jokes off. Mind you, homie’s trigger finger hasn’t gotten tired yet! I fucking love this guy. Snipe came to shoot the sheriff, the deputy, city council, the chancellor, the judge, the bailiff, and the stenographer cause they were all crooked.

I need more respect put on Snipe’s aim game. Dude legit kicked in the door waving the four-four and shot the villains up mad calm so he could get back to grading papers. These villains came to play Fortnite, Snipe came to play Red Dead Revolver. These villains thought there were getting Splatooon, Snipe said, “I’m on my GTA today”. Get this man some praise and a raise. Only hero to step to these villains with the firearm and talk about the necessity of gun control. Snipe is a Bast damn underrated treasure I tell you. Twenty-one gun salute for this man when he steps in the building.