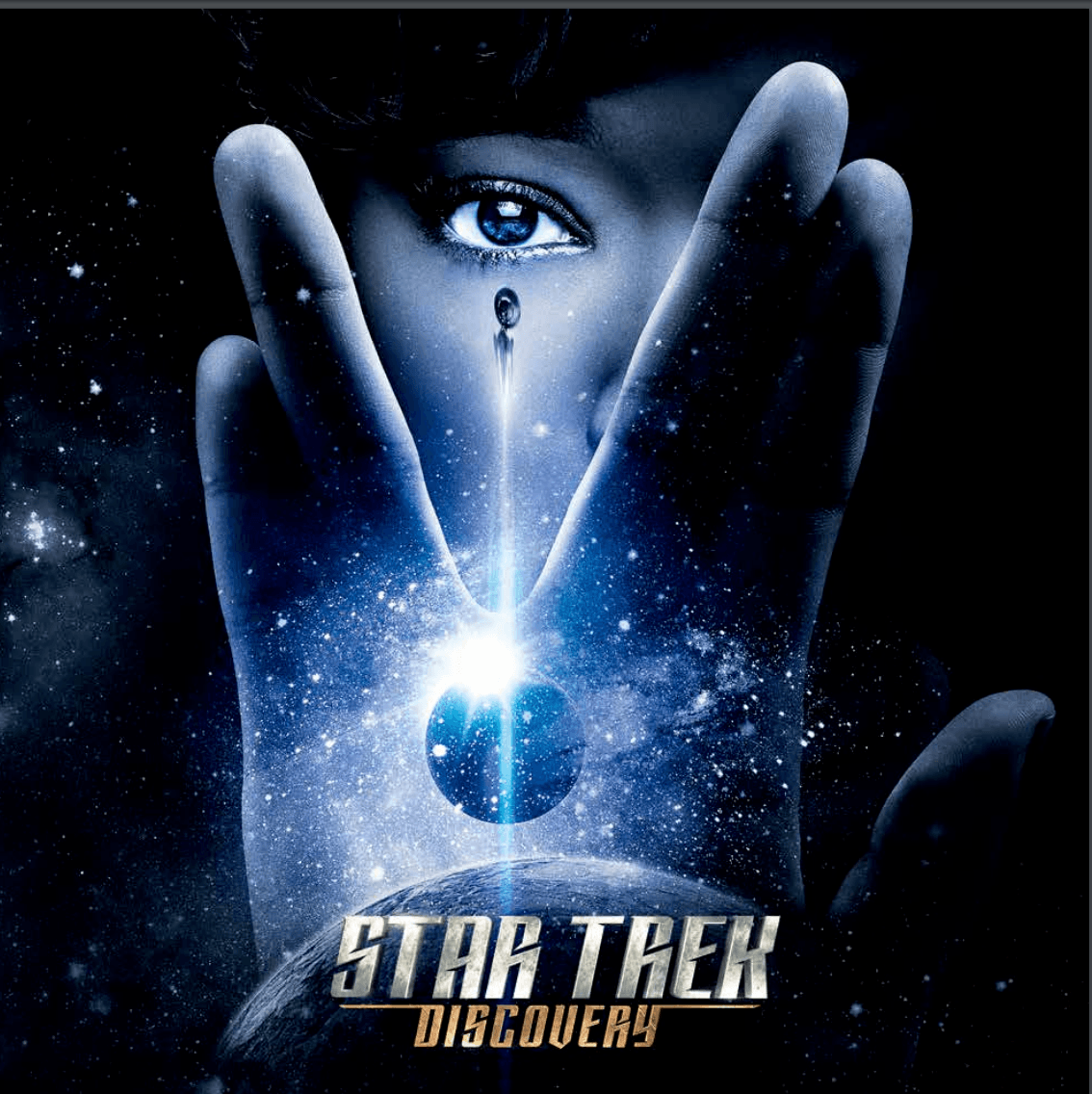 Star Trek: Discovery debuted a few weeks ago, but the after-launch buzz has been pretty subdued. There’s a few reasons for that. It is a busy nerd season, what with NYCC and new movie trailers dropping every other day. Also, the show is behind a paywall, preventing a general “did you see last night’s episode” Monday morning chatter. But also, as the show progresses, it isn’t flashy, not the way the premiere would have you believe. It doesn’t lend itself to controversy or jaw-dropping surprises thus far. I have plenty of opinions and feelings about the new show — because let’s face it, Star Trek fandom is one of feelings and character connection as much as any other objective measure — and they run the gamut from love to hate, with a fair amount of shoulder-shrugging ambivalence in between. Are you watching? Read on and agree/disagree with me. Not watching and wondering if you should? Read on, read on! 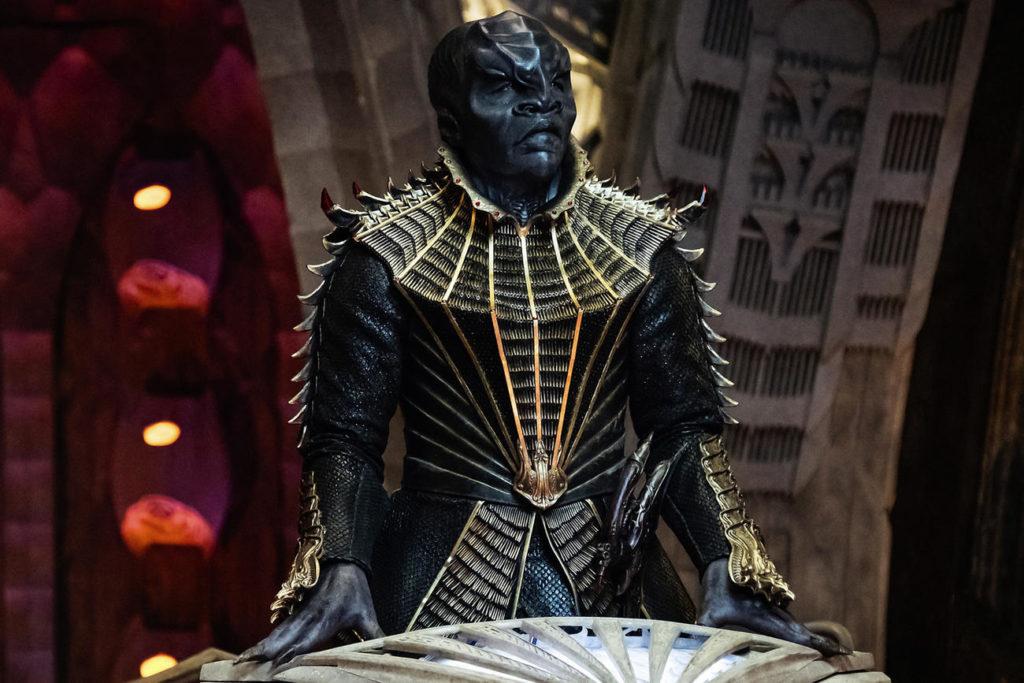 Their shiny black aesthetic. They all look like they’ve been painted black and then spray painted gold. Their pointy, sharp edged look has “reverse” evolved (this is the past to our favorite Klingons) to look like Egyptian sarcophagi and random ancient assyrian armor. On top of that, they’ve got a death cult with the leader riding around in a ship covered in coffins. This is goth high heaven. Their philosophy has also shifted, honor is still important but so is some impulse to cultural individuality. These Klingons are anti-space-globalization and anti StarFleet-lead liberalism. While all of this is a departure from previous incarnations, it is an interesting interpretation. Overall, I’m here for Klingons being real beings with their own ethos and direction and can forgive departures from canon. We’ll have to see if they continue to evolve or if they just become “the anti StarFleet”.

Yoooo…Voq. Why the special Klingon gotta be *literally* white? Why can’t special people just look like e’rybody else? My level of hate for the character is directly in relation to how they explain his situation. Is he an albino? or is there some closet cross-alien action going on? This is squarely in the Hate category, but I can be convinced otherwise, especially depending on how relationship with L’Rell, the female Klingon spy/confidante who comes forward in episode 4, develops. 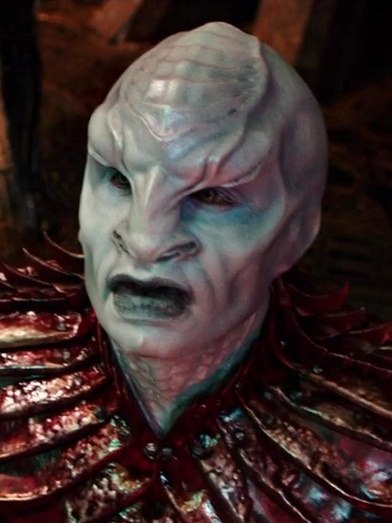 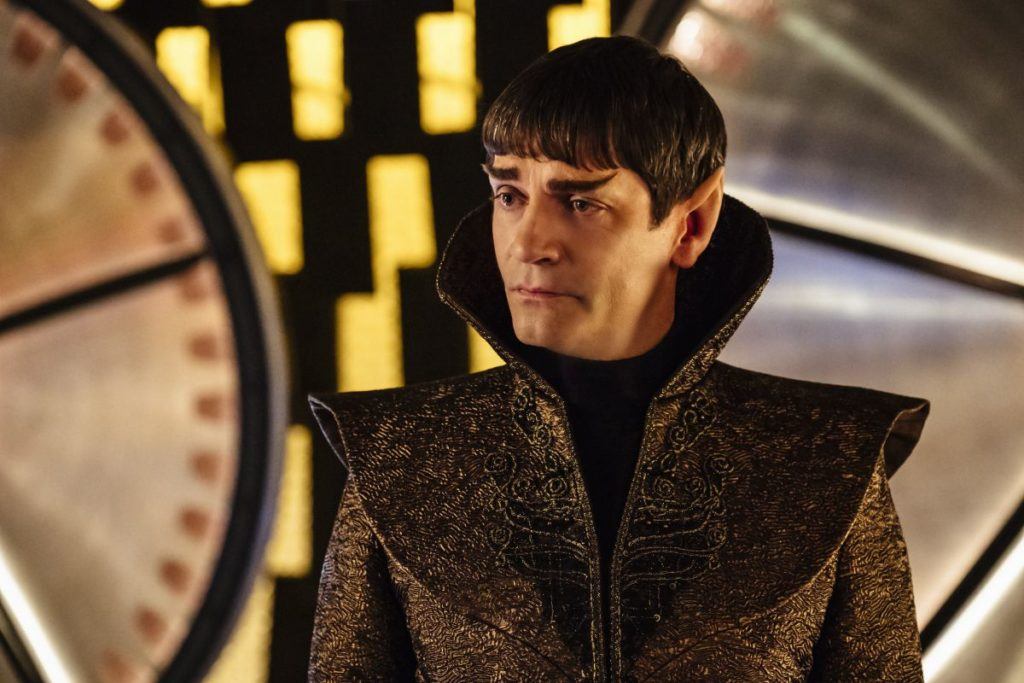 Everything. Always have. Always will. They’re just so *hard* and yet find ways to wrap logic around the most emotional decisions. “I just hate waste.” Whatever Sarek, she’s your daughter. Get over yourself. Michael’s relationship with the Vulcans is also, so far, reasonable and understandable. She is not a Vulcan. She refuses to claim them. I really enjoy how they slowly reveal hints of Michael’s life on Vulcan and her relationship with Sarek’s family without spending any air excusing the fact that she’s not mentioned in The Original Series. Michael embraces the cultural habits of Vulcans, and even Sarek’s ticks (when she says Fascinating it is a fangirl moment, for sure), even while not abandoning her humanity. “My emotions inform my logic,” she says. You’re not going to either/or Michael. Both/and please and thank you.

Cross universe, real-time telepathy? How does *that* work? One mind meld when she was little and now she and Sarek can talk whenev? Can she trigger it? or only him? Is it only in life/death situations? Or can they talk about the weather? Not only does it not make sense, it doesn’t add anything to their relationship. I get it, he’s a conflicted father figure, both b/c she’s conflicted about him and b/c he’s conflicted about his role. How does literal *Magic* change that? This kind of meta-narrative hand waving so you can force a conversation is a waste. Give me more of Michael solving her problems and getting into more of them, please. That’s enough. 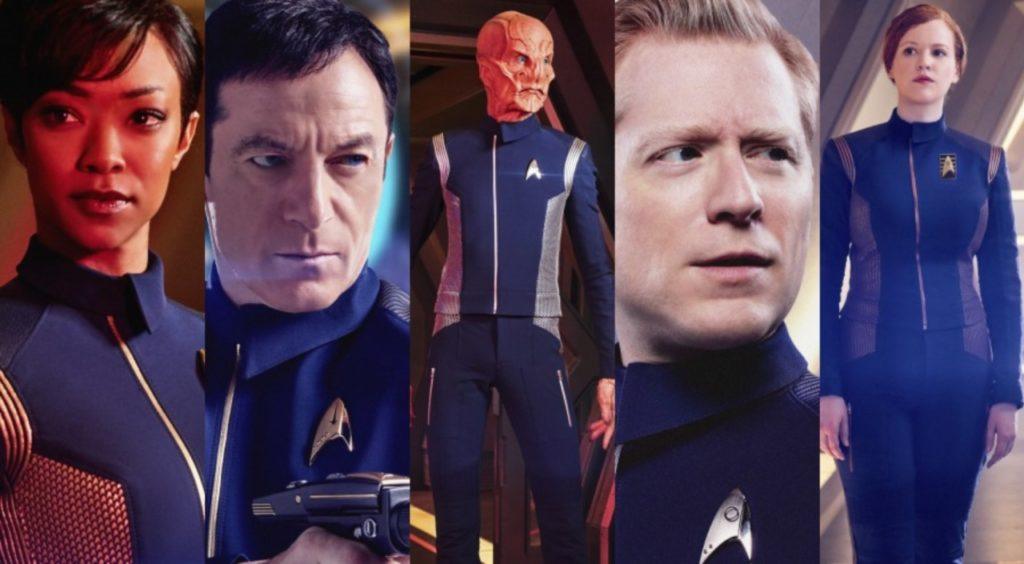 They are all so *weird*. Like, this is a bunch of people with serious personality, and personality isn’t always good. But it is always interesting to watch. Lt Saru and his “I can sense danger” gills is the guy we always wanted on the Bridge. Starfleet could use more caution, more “Yo, is this a good idea?” and less “How bad can it be?” It can be bad, y’all. Real bad. Saru is the guy you need around even if he is forever ruining your good ideas.

Lt. Stamets … to be honest I want to punch this guy. He takes annoying scientist guy to a whole new level. Except. The show lets him be an asshole and *everyone knows he is.* The other characters aren’t walking around pretending like he’s cool. When Stamets and Burnham are arguing and she drops the Vulcan eyebrown arch on him and says “I don’t follow” to indicate that he’s said something totally illogical and irrelevant? That is my every-day look! That ish gave me life! This is important b/c so often there’s a lie in television shows that nerd assholes are some how endearing in their meanness (see Big Bang Theory), which perpetuates the Gaslight that we should let nerds be assholes b/c…reasons. We shouldn’t. You can be maladjusted and not a total pain in the “A”.

Speaking of which…Cadet Tilly is exactly that. I wonder what her “condition” is that she refers to. I wonder why she’s so awkward and uncomfortable. I want to keep her around to find out. I have to give it to the show for pairing a beautiful, Black graceful character with a pale, differently beautiful, white awkward character and letting us see them compare and contrast in every scene. And have that white character ask the Black one for help while also trying to respect her space? What is this even? Let me tell you, their first interaction is pure real life.

Previous Star Trek shows lived and died by the crew. Sure, we love Sisko, but him sitting in a shuttle philosophizing for an hour made for some pretty boring episodes. But him and The Old Man and Warf and Kira? Even Space Racist O’Brien was important to making that a *show*. In Discovery though, there’s a problem. They’ve set Our Girl up as a mutineer, which means in any military context she is 100% untrustworthy. Even if they all think she was right, they can’t have her around b/c she may jump the chain of command at any time. This categorically precludes her from building a crew with the other characters. How are they going to get around this? I don’t think they are. I think the show is aiming for a “solo” adventure for Michael, with plenty of soliloquies and flashbacks, which is fine. But it isn’t what I loved about previous Star Trek shows and will definitely limit the variety of episodes going forward. 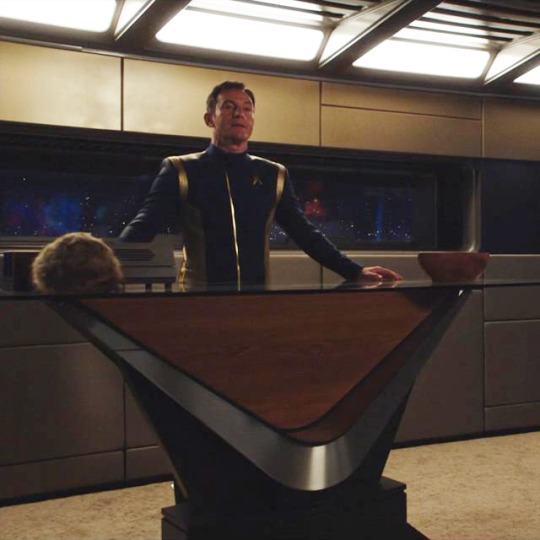 Lorca is complicated with a bit of the “you stare into the darkness and the darkness stares back” vibe. That could be good. The level of moral ambiguity he can bring to the series, and by extension that he will force everyone else to bring, could be interesting. Or it could turn this from a show about the triumph of diplomacy and reason over superstition and brutality into something else. And I’m not sure I like what “something else” might be. I don’t want grimdark Star Trek; that’s not why I watch. How much Lorca is featured in Michael’s development, and how far into darkness this all goes will really influence my long-term commitment to the series.

AND THEY KILLED CAPTAIN GIORGIOU. That’s some bait and switch BS if ever there was any. She was in all the promo work. I had dreams of Burnham and Giorgiou fighting Klingons against the wide blackness of space. But no. Giorgiou caught that Klingon one-two and I’m mad about it and will be for a while. 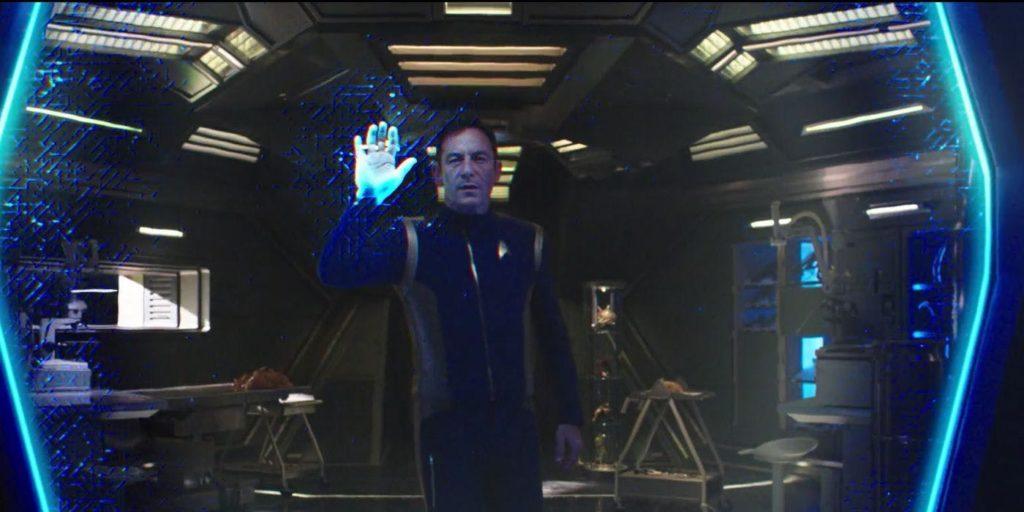 All so shiny. While I appreciate that they failed in making the tech look “old” against the original Star Trek, but I think that’s an unrealistic expectation. I don’t want to watch that show and you probably don’t either. What they did succeed at is making the tech functional and obvious from our current state. The color coding of sections and the sparse steel/metal/white plastic environments are natural evolutions of human environments. They are also designed so as to let all of the people and their prosthetic heads really stand out. The aliens have really evolved from the “fancy foreheads” of previous series.

The special effects are definitely inspired by the rebooted movies. There’s a lot of exploding and HOLY GOD ALL TEH LENS FLARE but it’s ok. Not a love, but not a hate either.
The costumes are sleek with the shiny side panels. I want one.

The fidget spinner ship. I don’t need science to explain everything but I do know that designs are best that are simplest. And that? Not simple. Holograms. Why are they still trying to make holograms happen? They aren’t going to happen. Stop.

Oh my friends. She’s the reason to watch the show. Martin-Green expresses a wide range of emotions and sells everyone one of them to the nth degree, often with Vulcan restraint that is even more difficult and effective. She brings a great active limberness to the role that makes her fun to watch. And her character, Michael Burnham? Burnham is aggressive but not random or impulsive. She’s confident but not sassy — sassy being the standard fallback character trait for Black women. She follows her heart but is able to admit when she’s wrong. She’s complicated in good ways but also will just punch you in the face if that’s what’s required. In terms of network television, she’s just different and I love that. The next question: Will she be a typical ho’ing captain or is she more reserved romantically? Does she make friends? Did she have any back on her original ship?

Because of other decisions, see The Crew above, Burnham is all you have as a viewer, you don’t see anything else outside of her experience (unless the Klingons feature more heavily in future episodes). So watching and siding with her as she navigates the new ship and the new life in wartime has to be compelling. For me, it is. Every other scene I feel like the show runners consciously took the expected stereotypes — either for a white man captain or a black woman character — and had Burnham do something else, something natural and real. At the same time, she gets all the hero moments and snappy quips that the star of a show is supposed to get. She even has a jump through an open hatch to land in the Iron Man pose. I am here for every minute of it.

Between Martin-Green as an actor, Michael Burnham as a character, and the totally unique co-stars, this is 100% worth my coffee money. While the first two episodes were entertaining, now having seen the following two, they were misleading. This isn’t a blow-em-up show, this is a mystery show. One that challenges who we thought StarFleet was and what kinds of characters succeed in this universe. I have some reservations, but I want to see where this all goes.
If you’re shelling out for it, or you live in Canada and are streaming it on Netflix, stay in touch with how you like it. If you’re waiting for it to come out from behind an ADDITIONAL paywall, I totally understand.

Stay with BNP for periodic updates on the series and if/when it comes onto a wider audience, you’ll see the news here!