Jason Aaron has had a pretty good run on what has become the flagship book for the Star Wars Extended Universe since the rights came back home to Marvel where they belong. Much like his work on Thor, Aaron offers a refreshing take on familiar characters while maintaining a unique, signature voice that comes across unmistakable. Now, as we move into a new story arc, Aaron approaches the time in between the movies from a slightly different perspective.

Issue 7 is mainly an important passage from Obi Wan Kenobi’s journal, discovered in an earlier issue by Luke Skywalker. The story takes place on Tattooine some years after Return of the Sith when the Jedi are basically extinguished. We see Ben as a defeatist, sticking to the shadows, doing the minimum amount of good where he can. Aaron effectively conveys Kenobi’s internal conflict. Watching over Luke is, as we all know, is an important task. 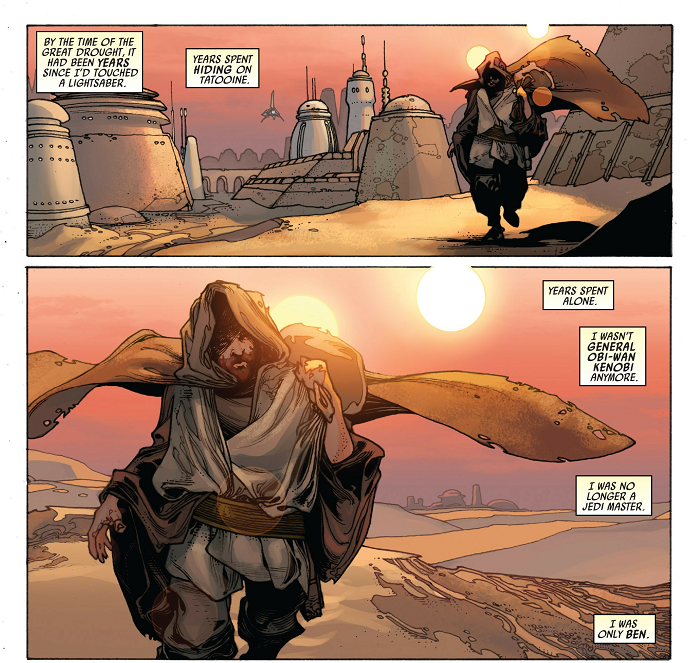 However, for Ben, this feels more like penance, a personal exile for the friend/protege he failed to save from getting in his own way. Artistically, this issue marks a changing of the guard. Simone Bianchi’s pencils take the helm here and although there really is no replacing John Cassaday, Bianchi manages to do a great job of making the book her own. There are some great moments where we see flashes of anger in Luke that successfully allude to his greater destiny. The action in a handful of the panels feels slightly stiff but it still gets the job done as a whole.

Bottom Line: Great flashback issue with tight characterizations from Jason Aaron and mostly strong pencils from Simone Bianchi. 8 out of 10