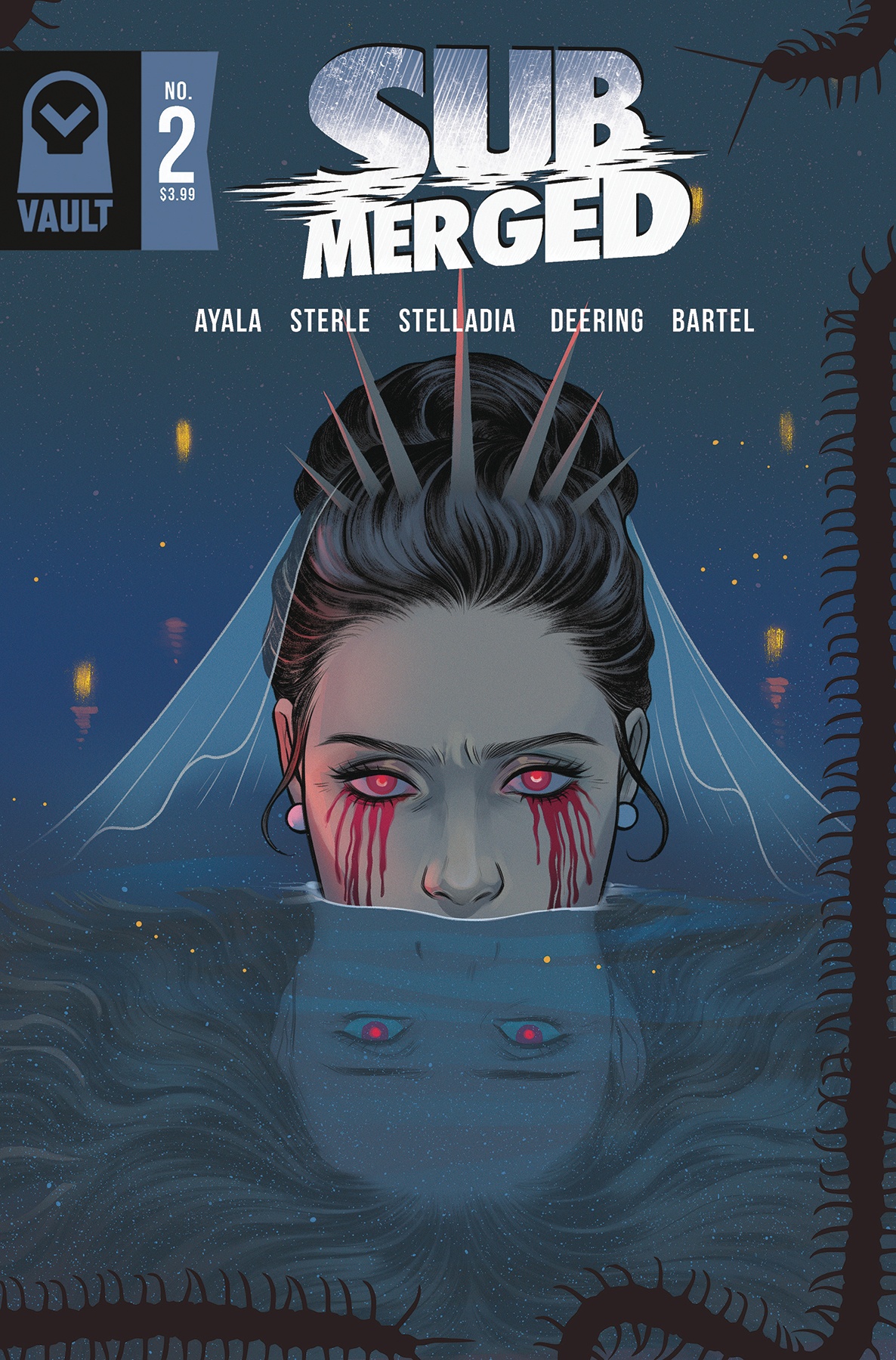 If you missed the first issue of Submerged, don’t fret!

Issue #2 has just arrived and there’s still time to catch this train.

Writer Vita Ayala has described the comic as a “A Queer & Brown contemporary retelling of the Orpheus/Eurydice myth set in the NYC subway.”

Our first offering has introduced us to Elysia, one determined older sister who has seen some strange things while on a mission to find her always in trouble little brother, Angel. After running from something big and scary with wings last issue, she comes face to face with a new horror: this frightening woman who claims that she’ll never let go: 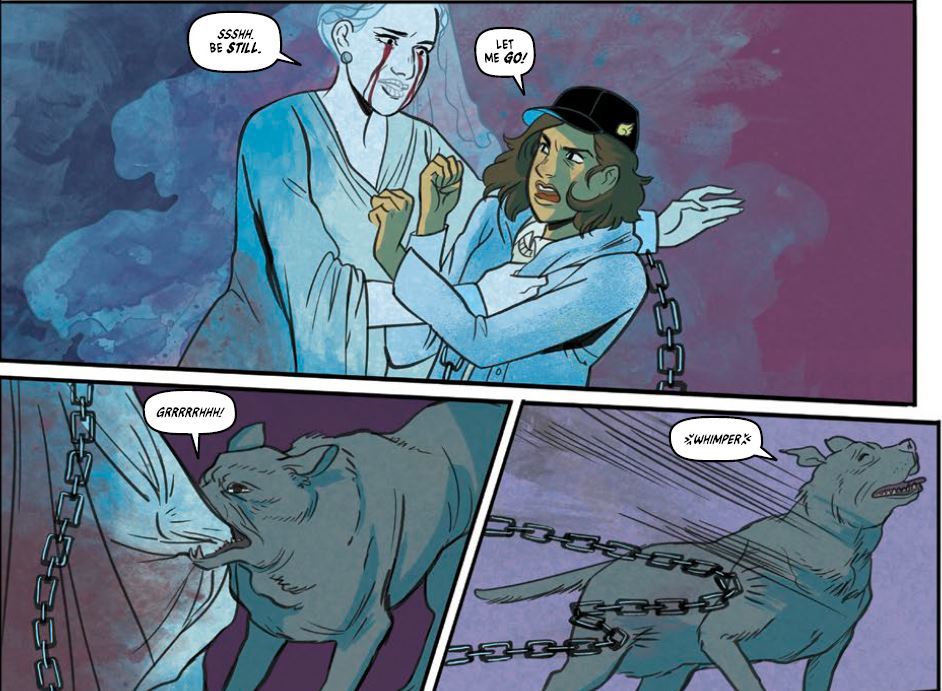 As visually terrifying as she is, the frantic need to be forgiven and to hold El with some kind of familiarity is unsettling on a whole other level. 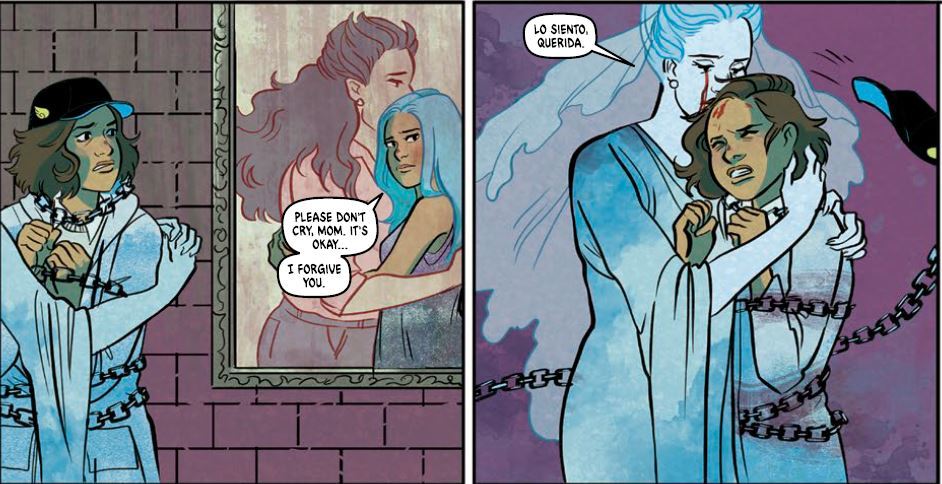 In one of the best parts of this issue, Writer Ayala and Artist Sterle work together perfectly to have this particular female character become a manifestation of El’s upbringing – more so than the smothering comfort of her mother and we’re treated to three different flashbacks from her childhood. The first as a young child, the second as a pre-teen and the third as a teenager. These flashbacks do not feature Angel in any way and instead focus on El and her mother and the suffocating motherly affection that shames her, belittles her and makes scared in her own home, and eager to make her mother feel more at ease.

It’s tough to read yet it sheds light on the complicated relationship she has with her family and the gendered difference she has to bear. This is in contrast to Angel, the boy child has always gone wild and free–able to navigate society but especially their household without much responsibility.

Whatever this woman – this creature – is, she knows how to glomp on to unlucky travelers and shower them with all the Love that they could ever want while seeping into their memories. Memories which, in El’s case, include guilt and family obligation. These are an impressive set of pages that help add to the lore and add to El’s backstory as we readers are quietly piecing together who Elysia Puente is and if this journey is worth it.

Along the way, our girl and her dog companion find a lost child: a little boy who has been separated from his family but is adamant in telling her that that they are nearby. –The narrative gets a little fuzzy as the little boy is around the same age as a young Angel from El’s flashbacks and wherever they are underground has led them to a place where memories and flashbacks are all starting to mesh up together.– More creepy things that go bump in the night doesn’t help the train ride. There’s a lot of action toward the end of this issue and El being stumped at more doors and evading those whom she thinks will do her harm. We’re left with another cliff hanger with some questionable characters making appearances right before this issue ends.

Sterle masterfully gives us more art that grips you –that almost jumps off the page and grabs you– it is a tasteful (hah!) horror show on wheels.

With each new issue of Submerged, I find myself wanting to get to know the characters Ayala pens (Daisy from The Wilds is yet another) more and more.

The overall look and feel of this book is much more complete. The lettering and coloring of Deering and Stelladia are always a welcome piece of the series. Their work is critical as flashback scenes are easily differentiated from the main story, an example being the character of the crying woman–she’s translucent in flashbacks yet solid in other scenes as a visual aid.

Another solid showing from Team Submerged! Be sure to pick up this comic so you won’t miss what an intriguing story these folks are giving us.

Read more of our site’s reviews of Submerged here.