And you say National City all over CW!

Almost Assimilated. Almost
Kara kicks this episode off like a page straight out of my head shaking memory. Lil’ sis dressing up some poor younger boy who knows no better, making him try on this and that. Settling for an atrocious outfit. Welp, at least she does her best to help Mon-El..whoops I mean Mike, eat full stacks of pancakes, get a laser haircut and get used to human culture.

That outfit she bout to make you wear tho fam?? TRASH!

CatCo: Kara got Mike looking like he at the bottom of the food chain in a mailing room. Kara got him handing out bribery coffee on his first day. But that’s unimportant once they stop at James’ assistant’s desk for the caffeine butter-me-up and I’m sorry ya’ll but this girl Eve is so sprung it’s uncomfortably hilarious. Kara’s forced to school Mike-El? Yeah, I’m gonna go with Mike-El, on the ways of not using your powers when people can see you and how to answer those alarms that keep going off.

Kara and James talkin’ alien assimilation when the bank they’re standing directly in front of begins to get robbed. Superhomegirl springs into action but gets surprise attacked by goons who are apparently listening to Mobb Deep cuz they rolled up in ski masks and alien hammers. And they was letting’em FLY! Oh they was letting them blasts GOOO!! Supergirl takes the L early in this episode and we see James get the superhero itch, then immediately get the no-powers-having beat down he’ll never forget.

Photon Cannons, Pytharian Magma Bombs and Anti-Gravity Gats, oh my!
DEO: Turns out this dude was using an Anndrannian photon cannon, which admits phased moon particles when it shoots. They weren’t purple people with fins so this was clearly a gang of Earthlings that got their hands on some weaponry they wasn’t supposed to. Winn looks for a way to track them based on the moon particle residue.

PSA:  CADMUS group DMs another announcement to the city. Crazy CADMUS granny starts talking about aliens are evil this. Alien technology is falling into the wrong hands that. Kara puts it all together and knows CADMUS is the one giving these guys the guns.

CatCo: James is out here being the weakest boss that ever put on a suit. Kara and an unnamed colored coworker go at each other’s neck over which direction their should go with this story. Dude wants people to have the rights to arm ourselves with whatever we need to fight aliens and Kara is trying to shut that shit down. There’s too many angles to this story and too little direction by James ‘The Passive One’ Olsen.

After the meeting, Kara explains to her former chocolate flame that they got weaponry that Krypton’s super advanced ass wasn’t even up on. Meanwhile, Mike-El  has zero human fucks to give as he got shorty sprung as a pogo stick doin his work while he munches on Twizzlers. Kara comes storming in like the big sister who got her hot stoner little brother a job and he actin a fool tarnishing her good name.

Bro-Mike was about to drop the meanest anti-feminism bars and get lit up with a super back slap, but Kara stops him, thank Rao.

Lena Luther rolls up MIDDAY?? and invites Kara to the upcoming L-Corp Gala fundraiser for the damaged children’s hospital. She gets the invite cuz she’s Lena’s only homie in National City. Mike-El invites himself to the gala and Lena is all the way down.

DEO: Winn is explaining how he’s tracking the residue left on Supergirl’s suit. But Alex is too busy daydreaming about helping Maggie when they get an alert that Anndrannian photon shooter is back out in them streets terrorizing citizens with his boy who’s out here using some purple rain Prince magic rifle to launch cop cars into the mufuckin’ atmosphere!! Does she save the cop?? Is he frozen to death?? Are the criminals apprehended?? No answers for this scene.

Earlier Maggie told Alex that she recently was broken up with. They investigate the anti-gravity gun launching cop car scene and when they wrap, Alex invites Maggie out and Maggie’s gaydar goes haywire! But Alex fronts like she ain’t bout that life. GIRL STOP.

Crazy CADMUS granny meets Mr. Miner, the Anndrannian photon goon at some undisclosed villainous parking lot to try and to convince Miner to slow down. Homeboy is getting ahead of himself and all she wants is for people to fear the weapons and become contempt enough for her and CADMUS to take over. He requests for his gun to be repaired, instead she hands him a bigger, glowing red bazooka.

CatCo: Kara finds Mike with his pants around his ankles and tongue down Ms. Sprung’s throat. Kara goes to break that up and scolds the newbie something severe.

But really, how could you argue with that logic?

National City’s Guardian Angel
DEO: James pops up on Winn and asks him a few suspect questions. Winn tells him about a sketchy van that’s been scoping out the Federal Reserve suspiciously and you know superhero James is just dying to be let out!! He puts on his Mobb Deep album and posts up outside the bank for probably 5 hours. Gang shows up and James gets a few good Barry Bonds swings in before our band of thugs serves James his 2nd course of ass whoopin. He got blasted 10 feet through a glass door, but he had a makeshift shield so he good. Good enough to help an entire building of sleeping citizens escape before it crumbles and he goes running down the street in super slow motion.

Winn lets James know he’s on to his death wish having ass. James tries to explain that his whole life he has played the sidekick. He finally wants to do something good for the world. But James’ best assets are his height, camera skills and the fact? that he’s a blackbelt, so Winn can’t support his non-superpower-having-ass.

[quote_simple]Sidebar: The subtle hints that Kara and Alex pick up on when it comes to each other’s little quirks are adorable. Sugar during the day. Walk a little too stompy. Love the details.[/quote_simple]

Subway Lair: They make some room in the budget for TWO NEW EVIL LOCATIONS! Why? So Evil CADMUS granny can hang down by the tracks advising her goons to stay away from Lena’s guaranteed to be star studded and swanky party. He threatens her life. She explain that he plans are way bigger than his dinosaur brain could handle, so she ain’t shook off a little handgun.

Lena’s fundraiser turned out to be exactly what we thought it was. Glamorous. Bougy. Targeted. Kara/Supergirl pulls the ol’ switcharoo on Lena a few times as Mike-El discovers his own sense of style and parties it up. Kara apologizes for beasting on him lately and tells him she’s gonna let him do his thing. They hit the dance floor and reminisce about dancing on their home planets. Well, that was until the three misguided goons with hyper advanced alien warfare technology roll up in the spot demanding every shred of valuables you could name. Pearls, watches, diamonds, wallets, they want em all!

For Those That Need a Win
James ‘I’m still jumping into battles and talking these Ls’ Olsen tries to do something and isn’t very successful. Mike-El tries to do something and isn’t very successful. Supergirl flies in tries to do something but is only moderately successful aaaaannnd the boys get the jump on her and are combining forces for a triple threat cosmic blast BUT WHAT IS THIS?!?? Could Lena and Winn actually pull off the surprise upset and fix the device that could take the thieves and their weapons out?? Why yes it is folks!! Winn and Lena get the induction coil connected and their guns are disintegrated. They come out from under the stage like the high school prom king and queen emerging from under the bleachers.

Alex finally drops her frontin ways and heads down to Alien Stonewall Inn. She meets Maggie and has a really really ridiculously hard time admitting that Maggie might’ve been on to something when she asked if Alex was into girls. No time to explore that possibility tho because Alex hit the burners and was out faster than a black lesbian at a Trump Rally.

Supergirl and Lena end our episode, and my theory on Lena being a good gal may or may not be entrenched in flames right now. Why? Because we find out that Crazy CADMUS granny turns out to be Lena’s mother. Of course a Luthor is behind all this!

I’m sure there were plenty of McDreamy fans who jumped for joy when Mike-El dropped the “I’ve been watching this show about doctors” line, when talking about having sex.

CADMUS is real cut throat when it comes to their test subjects and lackeys. No loose ends left alive b.

Winn and James coming to terms with Mr. Olsen’s crimefighting ways was dope. Great reasoning and it felt like the first real ass moment these two have had like all series.

Winn and James questioning if Kara will be into Mike-El because he danced with her..hilarious. They jelly.

WINN!! We so proud of you dawg. You been getting shitted on left and right by your writers and finally got the spotlight this episode. Good for that little IT hobbit. 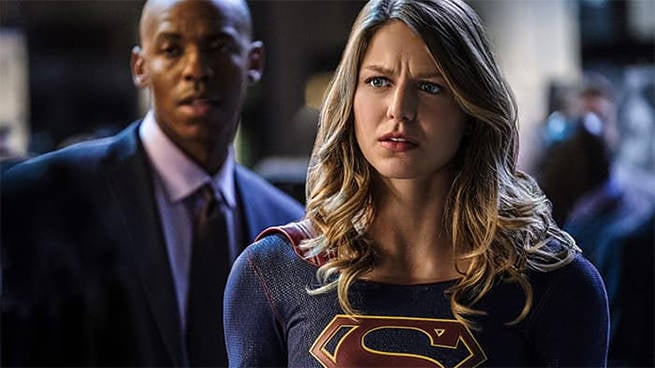