After Gene Yang’s debut on Superman last issue, the story moves quickly forward, giving us a full view of our villain and exactly what kind of threat they pose. They are some kind of tech giant that trades in weapons and whatnot, but also in information, which is it’s most valuable commodity. Superman’s true identity is probably the most valuable secret out there and it just became a commodity. What works for this book is the addition of Condesa and the development of her character. Her voice and portrayal is decidedly different from Lois, Jimmy Olsen or just about anybody that we typically find interacting with Superman. And let’s face it, given her aesthetic, that’s probably not a coincidence. Still, all the characters are done pretty well on the good guy side and the dialogue is pretty fresh and nuanced for a Superman book.

The villain (so far) however isn’t as well executed however. An information broker who’s initial threat to Superman, are robots isn’t all that inspiring, even though something larger comes around by the end of the book. Even so, the Hordr_Root in naming conventions and general existence wasn’t quite up to the level of development of everyone and is the only thing that held the story back some. 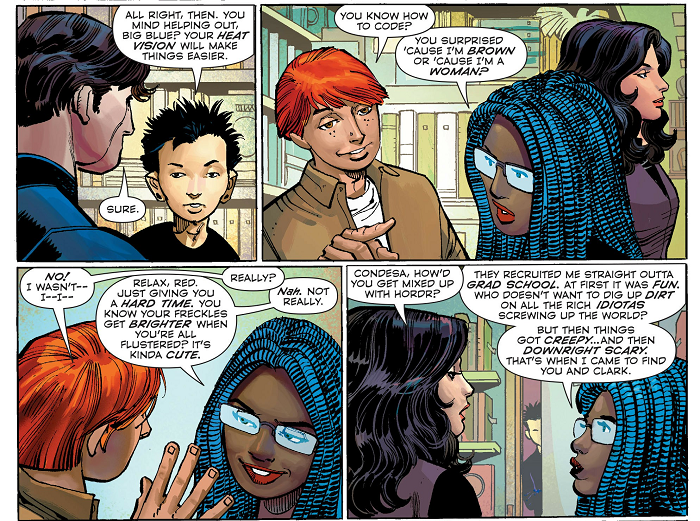 Romita, Jr continues to do well on this book, with just a touch of inconsistency here and there (he’s drawn the solar flare power of Superman a little sharper in the past). But this is still a good looking book and captures the tone of the action well.

We finally meet our villain, get more Condesa (which is good) and the secret we know is coming out gets a step closer to being in everyone’s news feed. A solid issue with some minor issues that moved the story along at a brisk pace.