What started as a fairly strong and unique story grinded to a halt this issue, focusing on Clark and Lois’ relationship after Lois learned his secret. This should have been a seminal moment for their development, especially to show some more personality from Lois, but ultimately, it just became a little soapy and made almost everything else in the book come to a stand-still. Superman is still feeling the effects of his encounter with Hordor_Root as he’s been knocked out for a over a day since his last flare. The creature that interfered with Superman during his last mini-explosion has had a lasting effect, and part of the battle for Superman is figuring out what it was and how it effected him.

Ultimately, his showdown with the villain is pretty empty and doesn’t show us anything new. I understand that it is a big deal that Superman, after all these years, has a new power, but the dependency on this solar flare power ever since Johns introduced it back in issue #38 feels like it’s run its course by this point.

There’s still good stuff here. We do get to see Lois in her natural element, but even that comes with some cache as we learn how Superman’s identity ultimately gets leaked and why. Actually, the “why” is still pretty iffy. That definitely could’ve been fleshed out more. 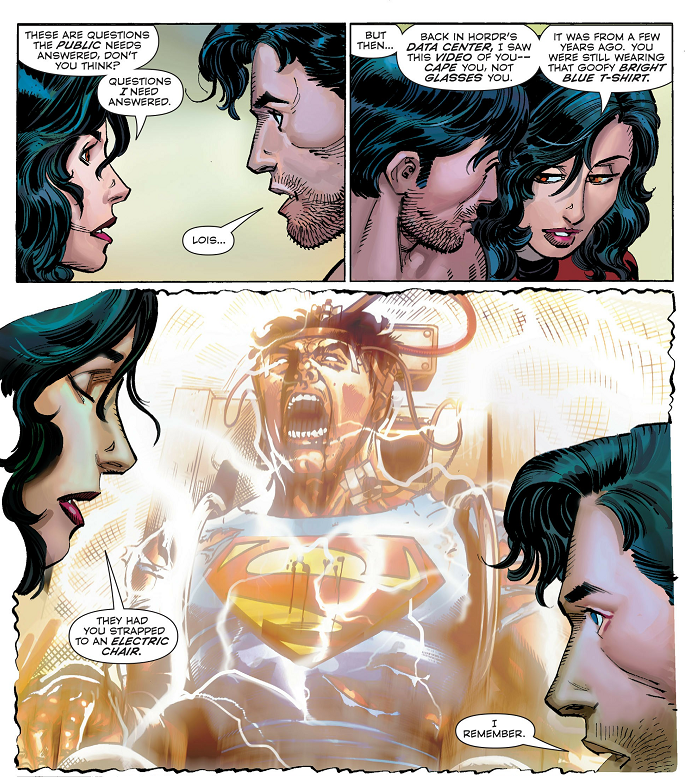 On the art side, Romita, Jr is still consistent in his portrayal of all these characters, though not much new has been explored. The creatures that Superman has to deal with in this issue look similar to the creatures in the last arc that controlled Ulysses, which may or may not be intentional. To be fair, half this issue takes place in Lois’ bedroom while Clark and her talk out their friendship, but when action is called upon, Romita, Jr still delivers.

The story lost a lot of steam this week from the momentum it had built up in Yang’s first two entries. The villain is a little uninspired thus far and the big reveal of how Superman’s identity is released didn’t have the punch it should have. Still, Superman is on the run now, and not exactly his super self, so that should make the following issues worth checking out to see where Yang takes the story.