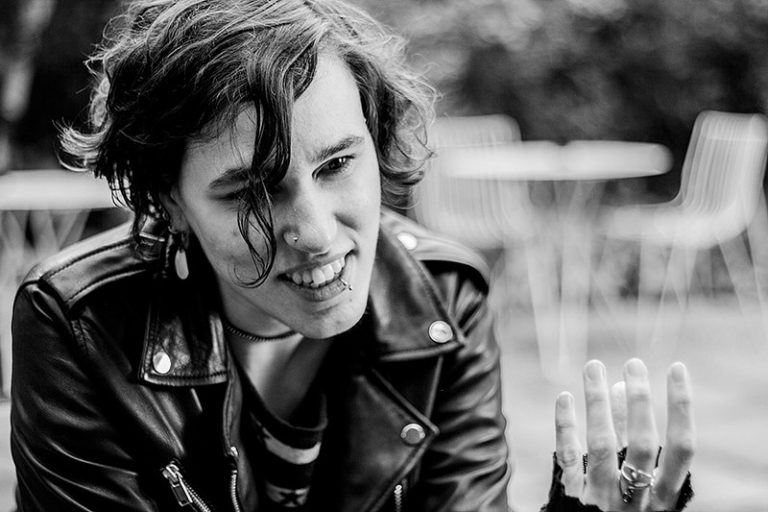 So now that we’ve talked about Faithless in preparation for Faithless II, we had a chance to talk to Maria Llovet, a multidisciplinary artist from Barcelona, responsible for the visual beauty for the series. 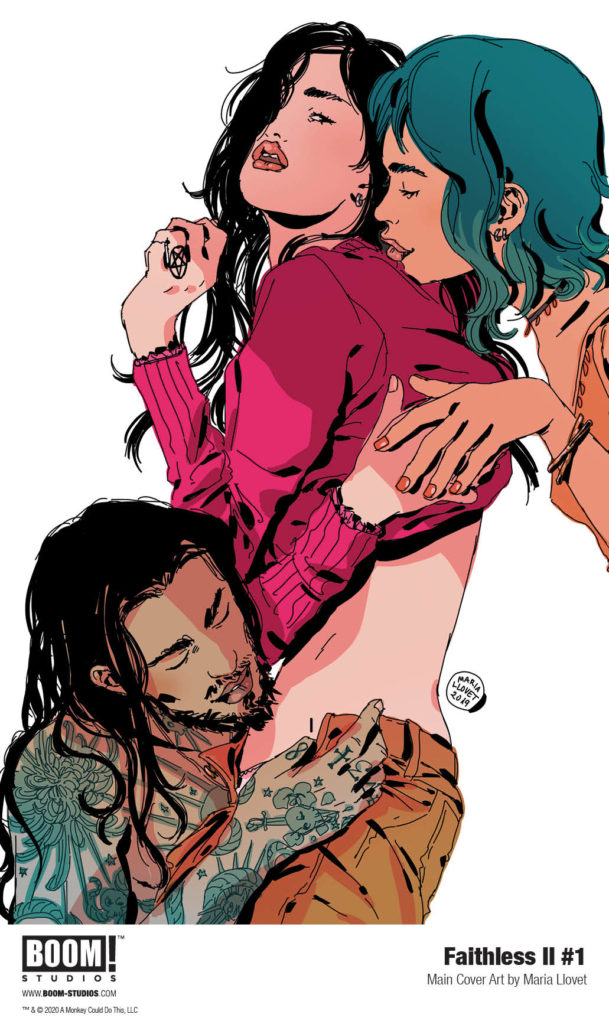 BNP: To open up a bit more generally, what are your preferred processes and mediums (print v. digital) for comic book creation?

Llovet: I love working digitally, all my work is digital in fact. I used to work on a regular graphic tablet until the iPad Pro came out. That was a huge change, getting back to looking at what I was drawing directly instead of at the computer screen was mindblowing, I work much more comfortably now.
The only down side of working digitally is that there are no originals of my work. It saddens me a bit, even if I’m not a paper and ink romantic. I really enjoy digital!

I like to do something manual from time to time, but mostly for myself or to get my mind off things. I love painting on fabric for example. 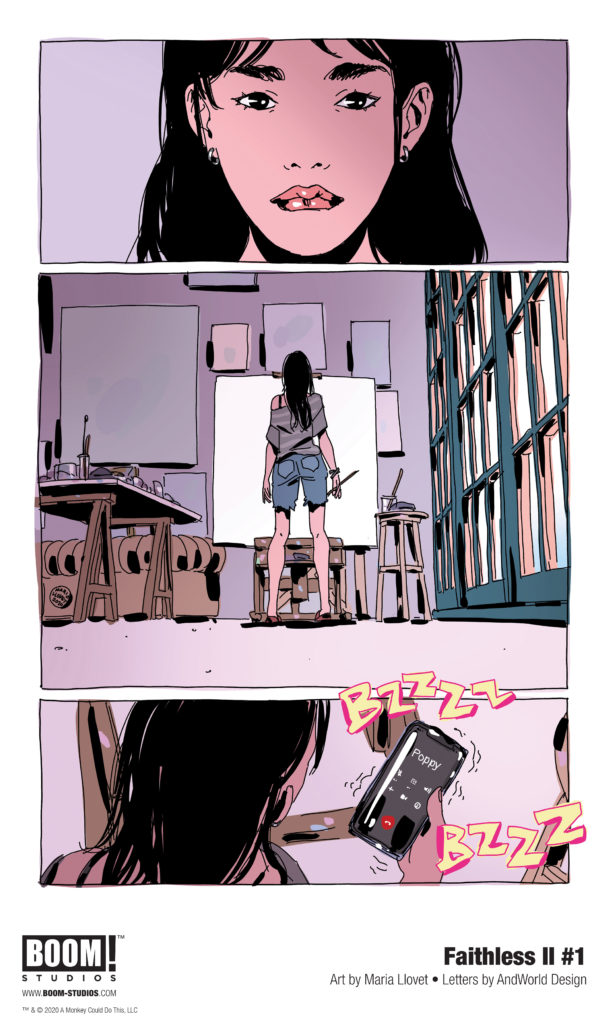 BNP: What are the challenges of working on both Heartbeat, a comic you write/illustrate, and Faithless? / How do you distinguish the styles of the two since they both co-exist within the horror genre?

Llovet: Well, Heartbeat is an old work, it was originally published in Spain in 2015, and my style has evolved a lot since. It actually was after finishing Heartbeat that I knew I needed a change, I wasn’t happy with the direction I was heading to, and I started experimenting a bit more. It’s a never-ending learning process, but I’m much happier now, I feel I have a much clearer direction to follow, without having to go back and forth so much as in the past.

You are not mistaken though, in the fact that I’m working on another personal project at the same time that I’m on Faithless. I started it at the end of last year and I’m going to retake it after finishing Faithless II.

The process is very different, one is an author work and the other is a collaboration. I actually view it as two completely different things, they’re not the same job even if they have things in common.

They’re both very demanding but with different rewards and problems.

BNP: What did the character design process for a series like Faithless look like? How did you translate Brian Azzarello’s initial descriptions into the characters we have now?

Llovet: It was interesting and challenging, especially Louis, he was the most difficult. It took several attempts because he’s a really important character and I wasn’t exactly sure how to portray him. Also I wasn’t used to drawing old characters and it was harder at first. But I like how he turned out in the end.

Poppy was the coolest because Brian said to make her a bit like young Mick Jagger and that was a great reference. I also used the model Saskia de Brauw as reference for her.

And for Solomon I looked at pictures of Slash, I don’t think anyone suspects that one! Ha!

I can’t remember looking at anyone in particular for Faith. She had to be vulnerable but with potential for growing so much as a character.

BNP: Part of Faith’s journey in Faithless and Faithless II is her endeavors as an artist. What’s it like trying to depict a fictional creative?

Llovet: I’ve always felt it’s so difficult to portray a painting in a drawing because there’s always the question of “how” to depict it. You have to show another style in your style but without them getting mixed up, it has to be clear it is a drawing or painting and not a photo, for instance. It’s kind of crazy when you think at it.

Before Heartbeat I had a project that I never finished, that was about an art school. Some of the characters were doing oil paintings and I was going crazy at the time. Lucky I never continued it, haha!

The last attempt I did at this was in my graphic novel Insecto, where one of the characters draws the other. But it’s line work, not something like oil etc, and was easier.

But in Faithless II you’ll see much more of Faith’s work than in Faithless, and also very different (her style is evolving), and I’m enjoying it.

Llovet: Oh, the answer would probably change any time you asked.

I think it’s interesting though, that the most fascinating part of comics is visual narrative, which is better measured in sequences or scenes than in single panels. It’s where the magic happens and you get the content of the story in a particular and singular way that can change everything.
A scene I enjoyed a lot in this regard is in issue 6, when Faith and Louis are talking on Louis’ office and watching Poppy through the monitors. Even though the sexy scene is with Poppy, the truly important one is with the other two.

BNP: Probably can’t show that… But there is a beautiful layout on page 4. 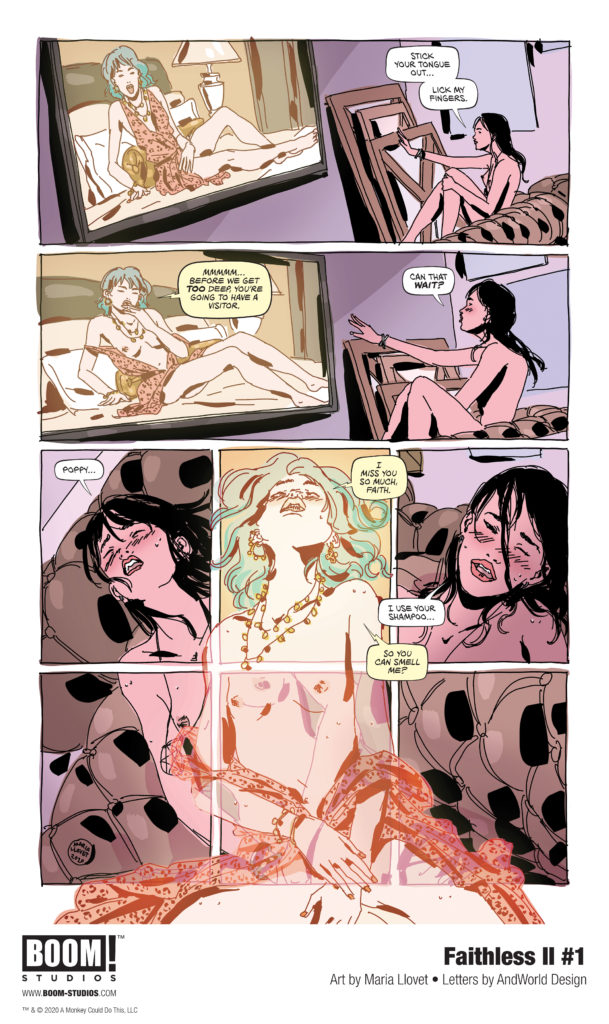 BNP: You cited manga and cinema as two big contributors to your artistic style. Are there any series or movies that stand out in particular?

Llovet: Deffinitely! Akira, Evangelion and Utena had a great impact on me. Also comic authors like Suehiro Maruo and Ai Yazawa are amongst my favs.

In cinema I could mention so many but I adore the work of Park Chan Wook, Wong Kar Wai, or Pedro Almodóvar for example.

This is an interesting subject because sometimes is difficult to difference between the things you like, and the things that you like AND have an impact in your work, they don’t always coincide.

BNP: What is a piece of media (not necessarily your favorite one) that you wish more people knew about?

Llovet: I don’t know, the things or authors I like are not exactly unheard of, haha, so I don’t really know what to say.

I’m the one that probably needs to discover more interesting works! Any suggestions?

BNP: Well… we have been cultivating a list of works we’ve been reading while in quarantine. But to close us out, anything to say to our readers at Black Nerd Problems?

Llovet: Thanks so much for having me, hope you enjoy Faithless II !!

Faithless II #1 comes out June 10th. Check out out review of Faithless, Vol. 1 before diving into Faith’s next chapter.