The saga is in third person and gives an entire world to explore freely. To be able to view the entire environment, you are required to climb onto the highest buildings to synchronize everything on your map. To quickly get down from certain buildings, you can perform a “leap of faith,” which involves jumping into haystacks without any harm. Crazy right? You are also able to hide from detection by blending in with the common folk. The combat system is pretty simple – you pretty much press one button to attack enemies and one button to block – and you have a wide variety of weapons such as throwing knives, guns, arrows, swords, bombs, and more. You also obtain a hidden blade that silently assassinates your enemies, along with a feature called “Eagle Vision” that helps you illuminate clues and find your targets easily. You also have the option of spending money on properties to rebuild them, which helps you receive upgrades. In Black Flag, you can even use and upgrade your ship for combat.

Each game’s story is unique in its own way. Here’s an overview how!

So as I said before, the first game introduces a bartender named Desmond Miles. He was kidnapped by a company called Abstergo Industries. Desmond is a descendant of a bunch of assassins, and Abstergo knows. Desmond is introduced to the Animus, which allows you to go into the memories of your ancestors through their DNA. Most of the game is spent using the character Altaïr Ibn-La’Ahad, an assassin that lives during the Third Crusade in 1191. You get to visit cities such as Acre, Damascus, Jerusalem, and the assassin headquarters in Masyaf. You later learn that Abstergo is run by Templars, which are the assassin’s greatest enemy. At the end of the game Altaïr obtains an artifact that Abstergo wants called A Piece of Eden – a device that shows a map of where the other pieces of Eden are located. All the pieces create the Apple of Eden: a very powerful weapon. 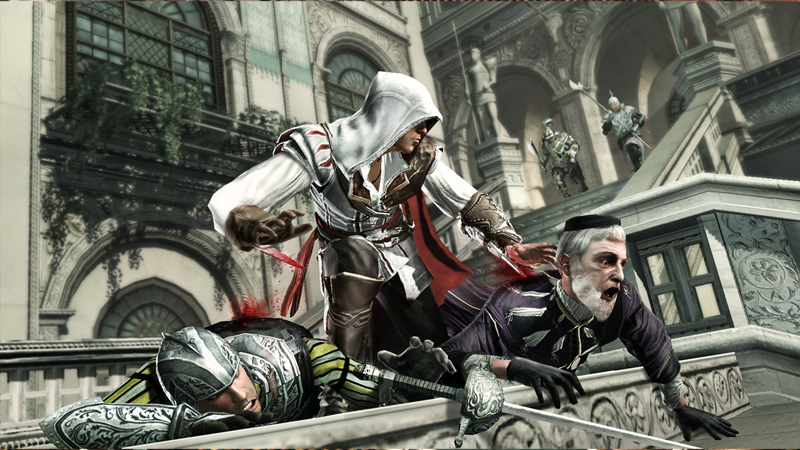 In Assassin’s Creed II, Desmond is rescued by a girl named Lucy Stillman and taken to a secret assassin hideout. He hops back into the Animus and is taken to Italy in 1476 to take over the memories of Ezio Auditore de Firenze, who was born in the bloodline of Altaïr. Since Ezio was not born into the creed, he has to train to become an assassin. After completing his training he has to deliver a message from Minerva and give it to Desmond. While this is going on, a man named Vidic, who works for Abstergo, violates the base trying to capture Desmond. However, Desmond and his friends escape. 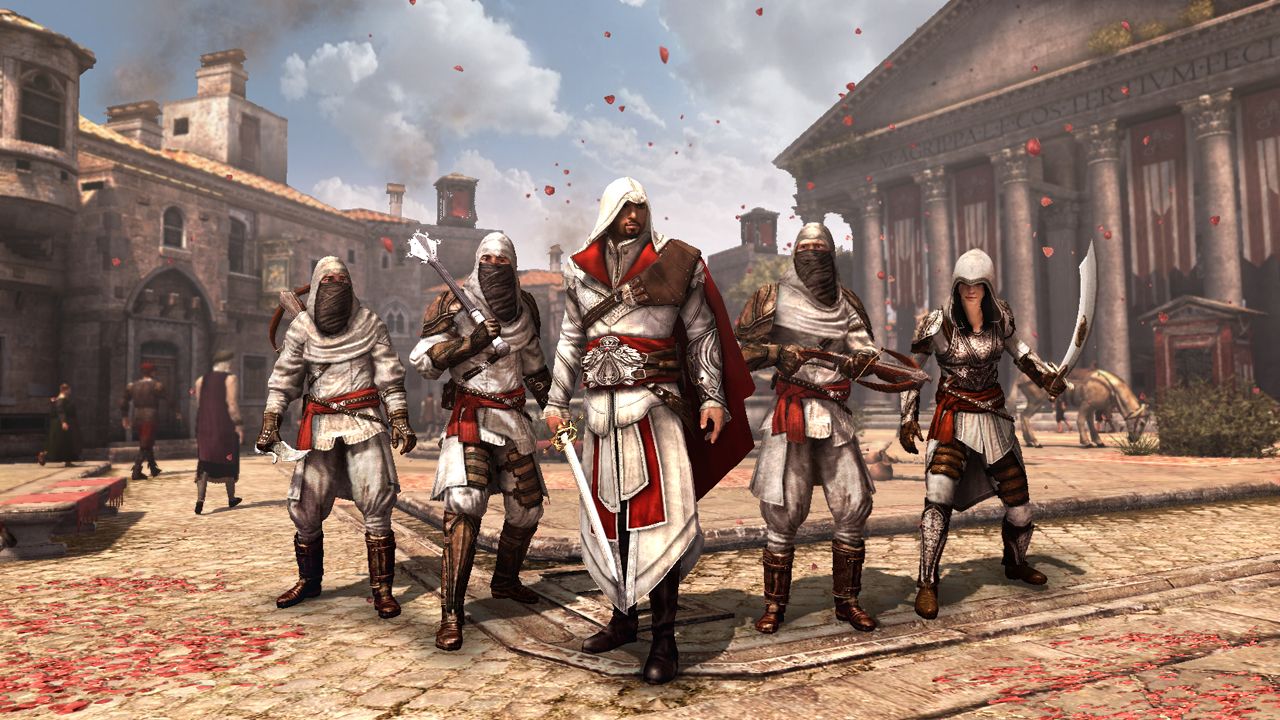 Brotherhood continues on with Ezio’s story. He travels to Rome to recruit more assassins to help get the Apple of Eden that was stolen from him. Desmond and his friends are hiding from Abstergo in Ezio’s villa trying to find the Apple of Eden with the help of Ezio’s memories. Desmond ends up getting the Apple, but in the process kills Lucy. Sad day for him!

Revelations is the last part of Ezio’s story. Desmond ends up in a coma and his father puts him into the Animus so he can complete Ezio’s memory. He travels to Masyaf and finds out that it is controlled by the Templars. He finds Altaïr’s lost library and finds the Apple of Eden hidden there. Desmond then awakes from his coma and realizes his mission is to stop the Templars. Honestly, I was lost during this game’s storyline but I just went along with it.

Now we are getting into the story of Connor Kenway, set during the 18th Century in North America during the American Revolutionary War. There is a big door inside this temple and Desmond, his father, and his friends must use Connor’s memories to find 3 artifacts to unlock the door. When Desmond gets it opened, Juno and Minevra get into some type of fight about Desmond’s future. Anyway, Desmond ends up dying in order to save the entire world from being destroyed. How noble of him, eh?

There isn’t much to say about this game. The main character is Edward Kenway, the father of Haytham Kenway and the grandfather of Connor Kenway from the previous game. He is somewhat an assassin, but more of an ordinary pirate. The locations are mainly in the Caribbean, on islands such as the Bahamas and Jamaica. This game has some pretty cool features, like being able to go hunting for sharks and wales, and being able to sail around the seas and battle other ships!

I didn’t even know this game existed for a while. You play as an assassin that turns into a Templar. “Drama Bomb!” – Lumpy Space Princess. It takes place in the 18th century during the Seven Years’ War and also has combat that can be done on a ship. 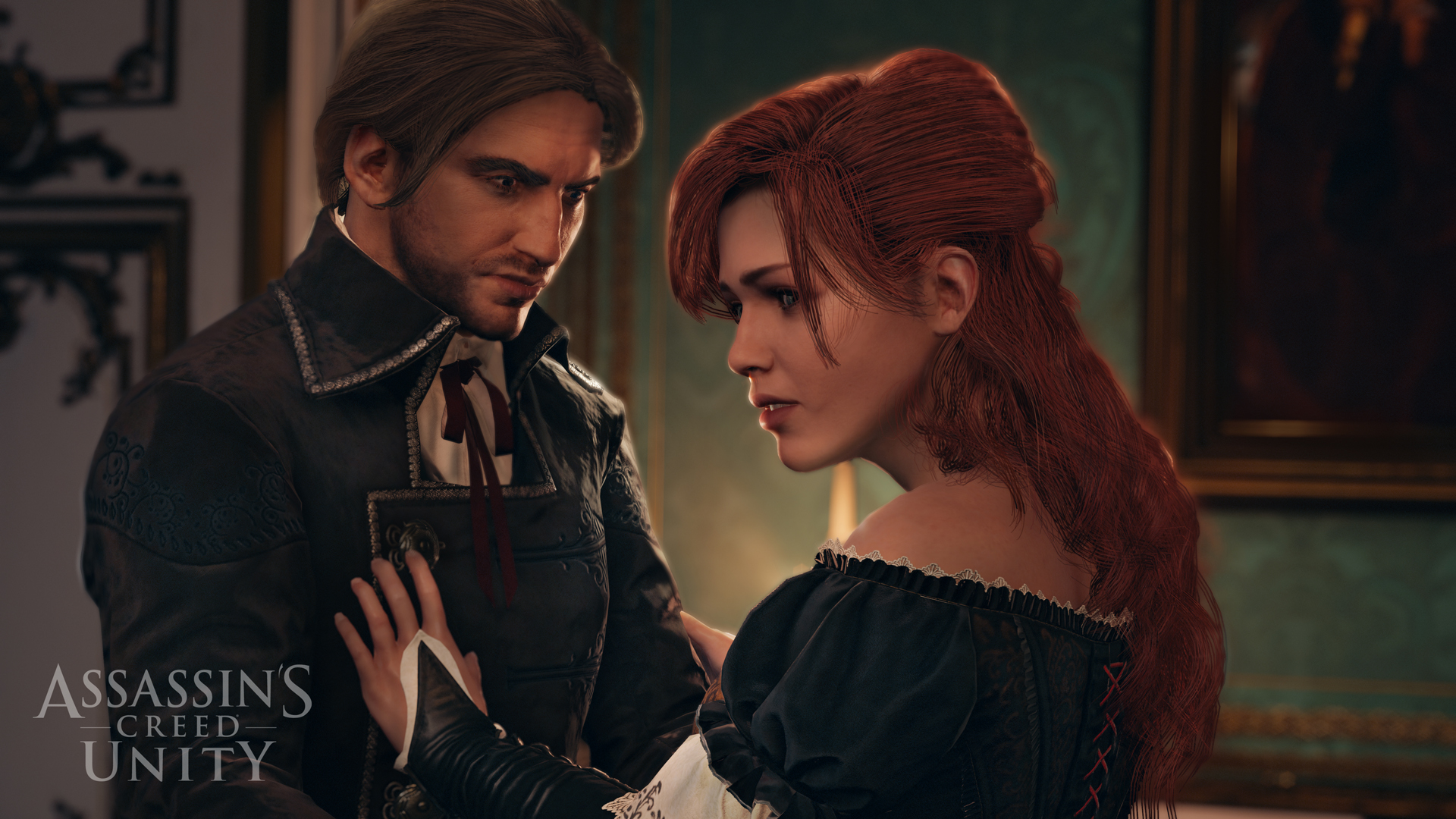 My favorite game of the series so far. Assassin’s Creed Unity takes place in Paris during the The French Revolution and you play as Arno Victor Dorian. Arno’s dad, who is an assassin, dies when he was just a boy, so Arno is adopted by Elise’s father, who is a Templar Grand Master. Since Arno’s dad was an assassin, he is not taught to be a Templar. Arno’s friend, on the other hand, Elise de la Serre is taught to become one. Arno is accused of assassinating Elise’s father and is thrown into prison, and that’s when he is inducted as a member of the Brotherhood. He goes through a series of challenges and uses the Brotherhood to avenge his adoptive father, and find out who killed his.

Overall, the stories in each game are interesting interesting, although I kind of wish the same story ran throughout each game because I was very drawn into Desmond’s. I totally recommend these games for anyone who is into adventure while learning some history on the side. Just don’t mention this game when you’re writing a history essay 😉

There are two things that always baffle me about these games that I need to vent about:

I understand his face progression throughout each game, until they got to Revelations. Like, wtf happened? It looks like he was morphed with a chipmunk. I don’t know why they made him look like that but it threw me off when I first played the game. Then they took a huge leap onto Assassin’s Creed 3, which is what should have come next!

Is it just me or do they both look exactly alike?