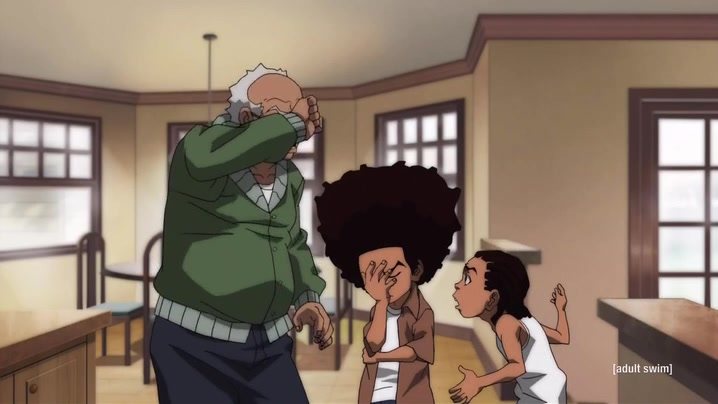 Season 4 of The Boondocks finished and… (deep sigh) yeah. The show didn’t have creator Aaron McGruder on it this year but that trailer looked so good tho, it looked like we’d make it out okay. Well we made it out and I do not feel okay. Much like when Dan Harmon was released from community the show was just not the same without Aaron McGruder.

Now I want it said on the record that I tried Boondocks, I fucking tried man but I couldn’t

This season was like the new manager at the job that has a Masters Degree but no common sense. They keep fucking up the office work flow while getting paid. The entire heart and soul of The Boondocks felt like it was under renovation this season. I’m not sure whats worse, the show not being funny or the blatant disre-… I’m going to go with it not being funny. If this season was funny I could maybe, that’s a gigantic MAYBE, forgive the fuck ups with the character portrayals. Matter a fact lets talk that shit for a minute.

This is what pissed me off, the main arc deals with Granddad having to deal with debt. He keeps falling deeper into it which basically has him signing over the house Ed Wuncler Jr. Ed Wuncler Jr’s plans to get them out of debt basically puts them in more debt, which has Grandad and the kids living in the garage renting out rooms in their house. The climax of the this is when Granddad signs a contract that entitles Wuncler Jr to “100 percent of your (granddad’s) time till you pay off the debt”.

What the fuck? It’s been established that Granddad is a war hero, civil rights activist (self proclaimed/ begrudgingly/ whatever), and this guy willingly signs up for slavery? There is an episode that depicts them having to work in a slavery themed amusement park called “Freedom Land” where they are dressed, worked, and humiliated like fucking slaves son. *see previous gif* What the fuck part of the game is this shit? Sure Granddad is materialistic and selfish at times but this shit? This?! No. This was a huge step back.

There is an episode that shows him in his younger days inadvertently getting involved in a protest (freedom riders) by getting on the wrong bus. He complains the entire time but when push comes to shove Gradddad fucking got down. Now, why even show us this version of Robert Freeman if you are only going to take it away in the present?

My other issue is with Riley. There was finally an episode where he was called out on calling everything “Gay” (via social media). This episode barely had some potential. At an apology press conference where Riley went awol from what he was supposed to say, Granddad steps in claiming Riley is slow in his own way. Which then got support from groups representing folks with mental challenges and disabilities. Riley is living it up using being mentally challenged as an excuse for slacking in school thinking its all great.

Until he has to do a promo event for group SAAAD, Riley is all for it till he is there with all the challenged kids chanting his name and cheering. This is the first time we’ve seen Riley vulnerable and clearly feeling guilty about what he is doing. 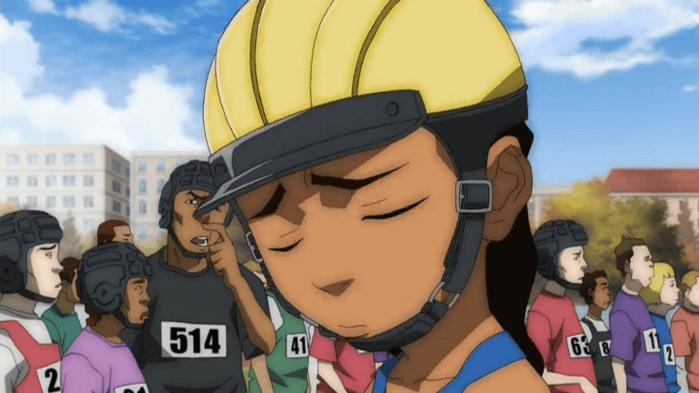 We could have had Riley show shades of when he was painting on the sides of houses. Where he was thoughtful in his own way) but no, we can’t have nice things. What we have is a set up for growth and a fucking let down which ends with Riley getting stomped out and running for his life. The season also doesn’t resolve the debt issue with Granddad so I’m lead to believe he is still a slave (despite the revolt that happened in Freedom Land).

This season was forced as hell. They dipped into taking on other shows with an episode that was an ode to breaking bad, an episode referencing the movie “Her”, as well as bringing back Stinkmeaner (once again). Watching this time around felt like being water boarded with mountain dew. I would often question why I was putting myself through this, what did I hope to gain? In the end the answer was not a god damn thing.

I gotta live with that…