HR starts off this ep with the voiceover that Barry usually hits us with. He out here talking bout villains constantly upping the ante. He poppin shit sayin, luckily they have a secret weapon, and no his name isn’t Flash, it’s HR holding a ginormous heater….BOOOOYYYY. GOOD. FUCKIN. BYE.

Back in the real world, The Flash and Kid Flash are tracking down the goons with military grade rifles and gats that HR was dreaming bout. They put the kibosh on these C-City thugs with guns and save a bus full of cheerleaders as Wally soaks up all the Kid Flash glory. Really? Cheerleaders? We gettin literal as fuck these days huh? Writers, you’re better than this. Actually, I take that back cuz as soon as they tell the team who they rescued Iris is like, “Exactly how many insanely hot and gracious cheerleaders did you rescue now?” Barry just sittin there like…

S.T.A.R. Labs: The Team debriefs, Draco Julian Dickfoy (said that in a British accent) literally cannot shut his Gods-forsaken, hate-spewing yap! Even after somehow (still don’t believe he ain’t evil) becoming an official member of the team!! Iris asks if the Electric Gang was talking to anyone when they rolled up on em. Word on the street is, there’s a new arms dealer on the block and Iris “Don’t forget about my journalistic Black girl magic” West is comin for him. After begging Cisco for an out, he brings Barry to a 3D diagram of the future he constructed out of Legos. He breaks down how fast Barry has to travel to stop Savitar from killing Iris. Julian, of course, comes through and shits all over their plan. He basically says, “Barry, your speed ain’t shit. Cisco, your plan ain’t shit. Boff ya’ll trash!” Cisco is tight, Caitlin is defending his asshole tendencies *eye roll*, and Barry STRAIGHT UP CALLS JULIAN A DICK!!

HOL UP!!! They can do that ish in superhero shows now? I’m OD hype.

The futuristic Xena the Warrior Huntress, young Amazon in the swag woman is up in Jitters investigating, touching things and VIBING?!? Ohhh sizzle! Cisco got a Earth-something doppleganger?? He must because homegirl straight up delivers the vibe-wave-fade to a couple of cops who roll up on her, then she breaches out. 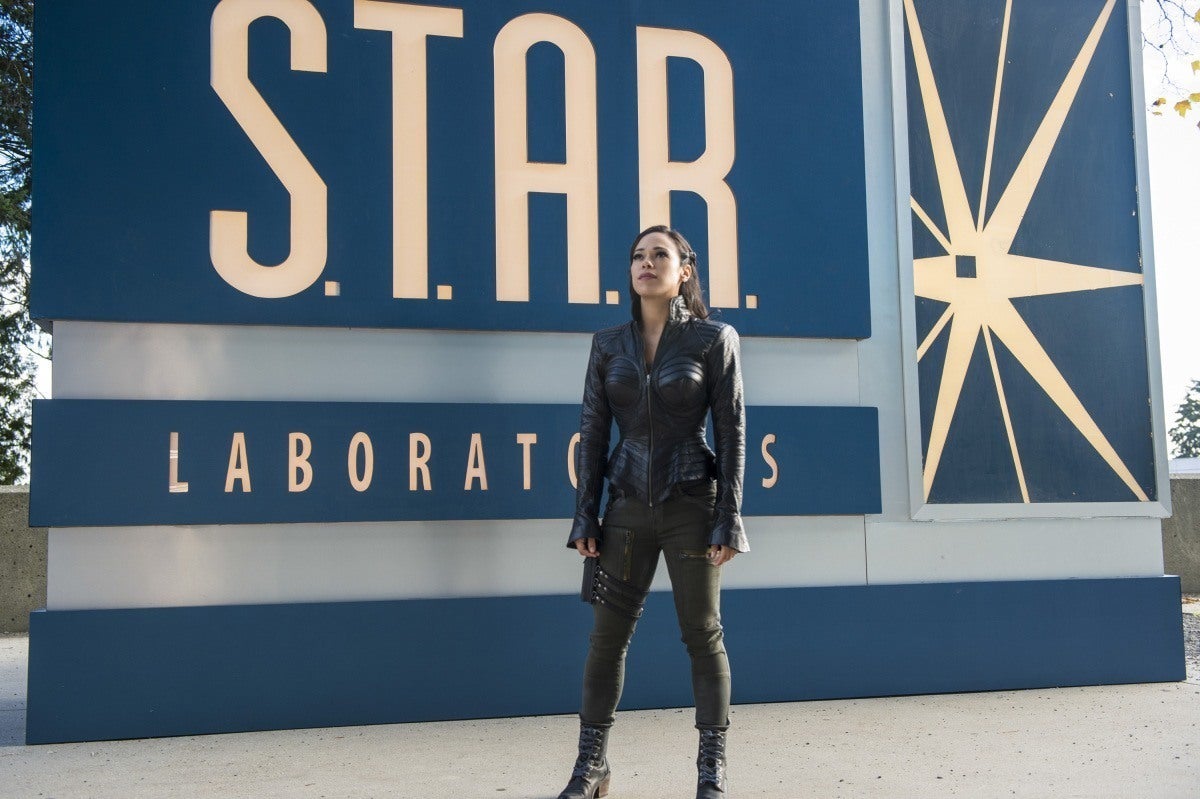 S.T.A.R. Labs: Cisco’s doing his best Felicity impersonation and is swiftly on top of the BNE, but she does them one better by popping up at the lab to hit HR with a point blank blast as Cisco and Caitlin watch this brunette beauty take out their boy. STOP THE FUCKIN PRESSES. You let this gorgeous but clearly lethal weapon of a woman roll up to YO HOUSE. Call out YA MANS in front of the crib. Say to hell with this fuck boy craven shit. Break into your spot and proceed to push your homie chest in like it was his first day in Oz?? While ya’ll stood there watching it all go down!? AYO can I gets Rick Flair WOOOOOOOOO!!!!!

Well, we all knew Cisco wasn’t gone do shit. He thirsty AF every time he sees a female that stands in his vicinity for longer than 3 seconds. Cisco snaps out of his stupor and asks her out for coffee, dinner, introduces himself, and gets blasted. Kid Flash pulls up tryna flex, but gets his ass handed to him, accordingly. HR explains that this is Gypsy. She claims HR is a fugitive on their world, then she tells him he has an hour to get his affairs together before it’s go time.

Sidebar: HR admits he may have broken a few laws, tricked our team, and has been blasting fake news across the multiverse (remember the voice-over?) detailing all of our teams adventures, battles, and conquests, with him as the hero of the tales. Sooo I guess it’s kind of illegal to jump through breaches without authorization. Somethin bout another Earth invading Earth-19? Guess that makes sense.

Gypsy returns ready to haul HR off like ICE agents coming for your neighbors and loved ones. Cisco does his best Tyrion impersonation and demands a Trial by Combat, which Gypsy is forced to accept, giving her opponent 24 hours to prepare. Then they set up the training warehouse and watch Cisco fail at everything fam.

CCPD: Despite Barry and Joe’s clear cut opposition to Iris going after these new arms dealer thugs, she convinces Wally to swipe some files while she distracts Joe with potential baby makin talk. It works like a charm and Jesse Martin absolutely crushes this worried and overwhelmed father scene.

S.T.A.R. Labs Danger Room: Cisco is keeping busy and continuing to kill it at being landfill in his training regiment. Barry tells him to trust his instincts, so he does, creates a breach and winds up in the rafters. Barry and HR discuss how basura Cisco is looking, and decide to curve this training and ambush Gypsy down by the waterfront. Waterfront: HR tries to lull her, while Barry runs up on her with cuffs, but shorty is the nastiest law-abiding adversary Flash has ever faced, cuz she catches our boy mid-run and tosses his bum ass into a tree through a breach!! Then takes HR as insurance and now Cisco must fight to the death for real for real.

S.T.A.R. Labs: Cisco is mad the guys went behind his back when they should’ve been supporting and training the young vibing Gawd. Cisco runs to his tech project room, and Barry goes in after him. They both discuss all the pressures of being a hero and having to face their fears. It’s a real ass scene. Julian pops up talkin bout, “she got an Achilles heel! Gypsy is off the ground and off balance every time she comes out of a breach so that’s your opening.” That’s his very slight and nearly impossible opening!

Iris and Kid Flash just know exactly where to go, cuz Iris, strong arm ready to run up in an arms dealer warehouse. Kid Flash runs to do recon, as Iris enters the spot, undeterred by 8 foot rifles on the table or the gun totin goon who could’ve blasted her to itty bitty pieces if Kid Flash hadn’t ran in and saved her. Cops show up and Iris and Wally turn into scolded 8-year-olds. Joe mad cuz the CCPD spent months planning this sting they jumped the gun on. Wally is mad his sister running around like she ain’t got a damn thing to lose. Iris is apparently worried about leaving this Earth like her mom, not leaving a mark on the world.

Waterfront Showdown: Time is up and Gypsy is about to haul her stash back to Earth-19, in the name of justice. She talkin sideways saying HR’s boy ain’t shit cuz Cisco didn’t show up. HR defends him saying he’s one of the finest men he’s ever know! OUT OF NOWHERE Cisco runs up talmbout “You’re right about that! I’m fine as hell.” Andddddd it’s showdown time ladies and gentlemen!

It’s a good old metahuman slug fest. They go  breach-hoppin from OG Earth, to a skyscraper battle on Earth-2, to a straight-up brawl in the center of CatCo on Supergirl’s Earth, to “The Duel on Mustafar” lava pit where Anakin got his Vader scars, back to OG Earth. All white pummeling each other from one universe to the next. SHIT. WAS. FLAAAAAMMMMEESSSSS!! After a bit of flirtatious battle, Gypsy finally has to break out her signature jutsu, pulls a Scorpion and jumps through a breach, but when she comes out to deliver her finishing blow, Cisco exploits her airborne weakness and takes out her legs.

He Shang Tsung yells and finishes her!! Cisco wins the Trial By Sexy Combat. She relents, by the rules of Earth-19, and gives over her prisoner and herself to him. But Cisco ain’t tryna have her on that Taken shit, and helps her to her feet. Back at S.T.A.R. Labs, they allow her to go home but she tells them that she’ll have to lie and say she killed HR. Sooooo HR officially has no home to ever return to.

Cisco and Gypsy have a moment before she leaves, and homegirl drops the sickest exit in nerd history!! Sorry Cisco, no smooches for you!

Despite his dickish tendencies, Julian was actually a big help to the team this go around. AND his dick comments actually provided some comedic relief in a few scenes.

Worst part of the episode? Iris picking up that pipe and breaking a lock and chain before entering the arms dealers warehouse zone.

Best line of the episode? Cisco: “I can’t help who I’m attracted to, even if it is the… sexy, intense, deadly ones.”

I thought it was a trial by combat…to the DEATH?! I’m just gonna sip this tea though…

Iris and Barry continue their love-a-thon and attempt to stop her brutal murder.

Barry to Wally: “I’m not going to save Iris from Savitar. You are.”

Good episode of The Flash this week! I wonder how we’re gonna get some more Savitar action, but I guess he can’t keep beatin up on Barry the whole season, so we must wait. That Vibe vs Gypsy fight scene was straight flames though!! Crazy tough. Keep these climactic episodes comin. If you missed any eps, check out our season 3 recaps here.