YO. The Flash went from luke warm shower last week to a straight up tundra ice bath episode this week. But they had some pretty great comedic moments, which saved it from the roast-a-thon I was finna cook up for they asses. Alright, lets jump right into Monster, one if the wackiest episodes of The Flash to date!

Cisco’s Crib: We pick up where the Scarlet Speedater left off last week, with his decision to let Joe have some breathing, possible bag a certain DA, I’m a big kid now, space. But Barry…bruh, you been living with this man for years as an adult then you up and decide you can’t spend one single second longer? I guess they did try to play my boy Barry when Joe and Iris hit him with that, “it’s about time” response. That leaves Barry all up in Cisco’s personal space until he can find a no-longer-bachelor pad. Oh you want a comedic gem from this scene?

Cisco: BARRY! Sometimes a man wants to butter his own bread.
Also, Cisco thinks there’s something a little off about the replacement Wells, HR. Barry wants to give him a chance, but you just know it’s bound to get weird when Cisco starts an episode like that.

Now that her powers appear to be getting more amd more unstable, Caitlin goes to visit a mysterious Dr. Tanhauser.

We find out this scientist also doubles as her mom. Yup. Of course her mom is. Well. They have an extremely awkward introduction then Cailtin goes from 0 to -100 real quick! Mom dukes might’ve been treating her daughter’s concerns like another bullet point on her “To Do” list.. but Cailtin commands her attention when she slams her glacial fist on the desk and tells mom that the patient she needs help with is her own flesh and blood. Mom clears her schedule then her career backup QB, Nigel, sets up a super heated cylinder that will test how she freezes things. 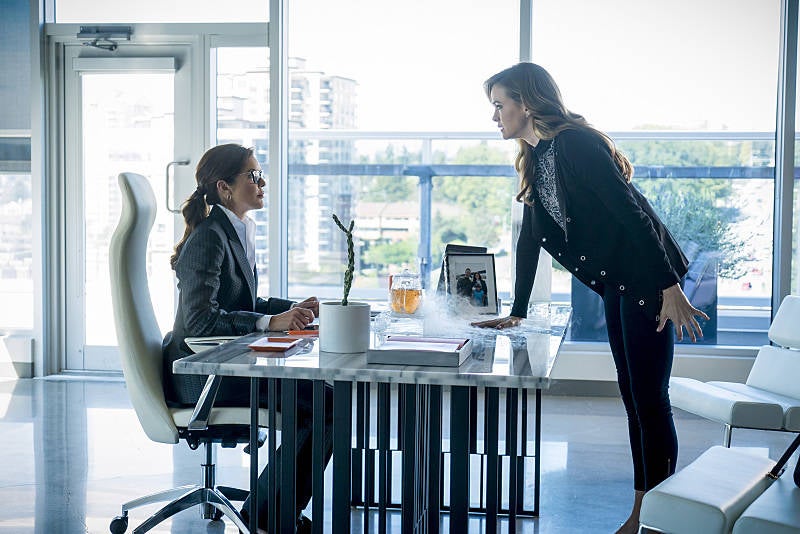 STAR Labs: Earth 19 Wells, HR, is on an unwarranted caffeine infused rampage handing out personalized coffee orders like the creature in Men In Black that sorts the mail like a madman. He’s out here doing the most. French impersonations. Drawn out explanations of each order. Corny jokes. The whole 9 yards. My man Cisco, who’s number of fucks he has to give was heavily decreased thanks to Flashpoint, has so much less chill than before. He told HR not to get comfy on this Earth then straight up told him he’s not feeling this dude. He makes HR fall back and observe before trying to be Mr. Do It All at 7am. [quote_simple]Comedic gems from this scene: HR saying good morning the E19 way, ‘Supmtuous Morning!’ and that ridiculous dramatization of how people say goodbye on Earth 19[/quote_simple]

AKA they dab at each other. People on Earth 19 dab to say bye!! I’m done. Bye Felicia.

CCPD: The Barry and Draco Julian hate train continues with a SNITCH ALERT!! Barry walks in to work late, to the tune of his boss and labmate sitting in a room waiting to scold him for his various finger wag worthy infractions. Julian ‘Rat King’ Malfoy told Captain Singh about 8 no, 9 different violations so Singh tells Barry to start following all the rules. Yo Julian was soooo salty after that 15 second slap on the wrist, Angelina Jolie could’ve taken some tips. The Dead Sea would’ve been jealous. Lowry’s and Morton are battling for the rights to sponsor the CCPD cuz of his salt levels.

Barry runs into Joe after his warning and filled him in by basically saying, This fuckin guy! Cisco interrupts with a call to let Barry know that he got 30 hits on the Meta Human detection app!! 30 my G! Get that ass moving. He Flashes downtown to assess the problem and around the corner comes a mothafuckin hunnit foot 4 armed T-Rex lizard monster!! He runs into Iris out here putting in that no-power-having-reporter-black-girl-magic WORK, saving bus riders and civilians. She told Barry she’s holding this shit down so he chases down the monster, with the help of HR’s follow the car alarm sounds tip, but the creature vanishes into thin air. They debrief and Harry comes up with an idea to spin carbon fibers into a crazy strong rope capable of pulling ships. Turns out HR might not be evil and could be of some use, after all. Before bouncing, Barry mentions that a transformer exploded without the monster touching it. They store the info in the shoulder shrug database and HR gives Barry a look that makes him go try to play nice with Julian so they can get some info on the monster crime scene.

CCPD: Julian is still hung up on this CCPD Golden Boy thing and Barry just wants to be amigos. Julian hurls insults and tells Barry about his distaste for Metas and in that very moment, Barry decides to go all in and asks Julian if he could shadow this dude during the giant monster investigation. An internship of sorts is now in the works. And only in exchange for the entire lab!

S.T.A.R. Labs: HR does the creepy record memos on his pen device thing that the original evil Wells was doing!! Things going according to plan? Hmmmmm..

Back at Dr. Tanhauser’s lab, Caitlin and mom spend the majority of their time having horrific conversations throwing eclipse levels of shade at each other. We find out that Caitlin sucks the energy out of things forcing their core temps to plummet. They continue to run tests but Caitlin tells them she’s already done all these basic ass science tests! She came here for the momma Tanhauser TLC but instead they dread up every ounce of the old painful memories. Dad died and moms was unable to love her daughter like she used to. Caitlin was goin in on how shitty of a thing that is for a mom to do and she was ready to choke Caitlin out but settled for one of them, “You’ll never understand what I went through” lines. Caitlin hit moms with the neck break and side eye stare of death and told her exactly why she knows what she went through. Ronnie we miss you homie!! Taken from us way too soon.

Internship Day: Barry and Julian are out in dem streets collecting data, figuring out that the monster must run on electricity because it has been blowing transformers everywhere it turns… THEN GETTING ATTACKED by the gigantic creature… THEN THIS DUDE JULIAN Malfoy out here brandishing a mufuckin burner?!? Draco Julian, this ain’t a wand bro, you could hurt somebody with the toast! On top of that ridiculousness, Barry had to save his little ass from falling debris and all he got in return was a “cheers”. Damn.

Nigel out here fuckin with the wrong one! He locks Caitlin up in the lab so he can be recognized for his own work. Uhhh.. bruh. Except for the fact you kidnapping white women in mufuckin professional laboratories?! You wild’n bro. Oh and lets not forget about the fact that Caitlin has super fucking powers and could turn you into a popsicle at a moment’s notice. You was looking like a good ass dude too. My theory is this is a deeper look into Momma Caitlin’s true nature. If this dude been her understudy for this long, and she has the ability to make sure nobody ever knew this happened, she must hold crazy weight in some social circle(s) of power.

Julian continues his Meta hate streak. Barry continues to try and understand, so he asks why, specifically, he hates them so much. They both imagine what it would be like to have those powers (side eye at Barry lyin’ ass). For Julian, it’s probably the realest shit he’s ever wrote. He is pissed that these people get blessed with such astonishing abilites and so frequently resort to such petty crimes. Barry tries to defend the psyche of metas who go from an average Joe life and are forced to adjust to this crazy life of abilities and scrutiny. Julian Malfoy is done with Barry defending these people and he deads this whole career day business.

S.T.A.R. Labs: It becomes pretty apparent that HR is a grade A fraud! He’s just been repeating all the things that the guys have been saying and helping out minimally. They go to vibe something that belongs to HR but he sniffs them out and reveals that he’s just a writer looking to collect research for his next novel. They don’t really believe him so HR tells them to play the message that they were almost done listening to. Turns out he does not have a grand evil scheme in the works. Orrrrr he just hasn’t gotten caught yet!!

Dem Streets: The Monster returns to wreak more havoc in the city. Flash begins to get the carbon fiber rope ready to Empire Strikes Back that gigantic creature… but it goes right through the dam thing. They figure out what everybody at home knew for like 30 mins already; this thing is a hologram. Flash remembers what Julian was saying earlier and figures out what building the perp is hiding in and runs in after Julian who he knows has figured it out. Julian finds Mr. Robot and when he doesn’t immediately surrender when asked, Julian lets a hot one go like he’s fuckin Rambo, and Barry swoops in to save Julian from murdering a child. Turns out the hologram was being operated by a 15-year-old kid who was tired of being bullied at school and wanted to flip the script and make other people scared for once. Flash leaves the rest to the greatest dad on television. Joe has a nice little chat with the nearly dead boy and breaks out his Care Bear dad voice but also breaks out the dad cop voice on the youngin. It was real.

Draco Julian, professional dick and CSI guy, eventually bonds with Barry over his scare and the truth that he’s been frontin about all episode. This metahuman outbreak has made him feel “powerless” as a scientist. He was once at the top of his field and BOOM something happens that changes the course of his life overnight. Barry becomes the bigger man and they go bro it out over drinks. But not before Mr. Malfoy Hater Supreme tells Barry he doesn’t have to give up the lab. Could it be the start of a brand spankin bromance?! Hope not. I like a character who doesn’t immediately think Barry is God’s gift to C-City.

HR comes clean to the group. They almost give him the boot until Barry and Cisco remember exactly what kinda life they be about. Forgiveness and redemption.

Caitlin gets a vid chat from her mom who tells her something most fans already figured. The more she uses her powers, the harder it’ll be to control them AKA she’ll turn into Killer Frost. Andddd nobody will be mad when that goes down. Caitlin needed a damn storyline for season 3.

That San Francisco line had me dyinnnn. But they used it like 3 more times. Moderation writers, always in moderation.

WWM: HR was talking out some battle on his world between Two forces called World War N or something? Wish I knew if that was a real thing.