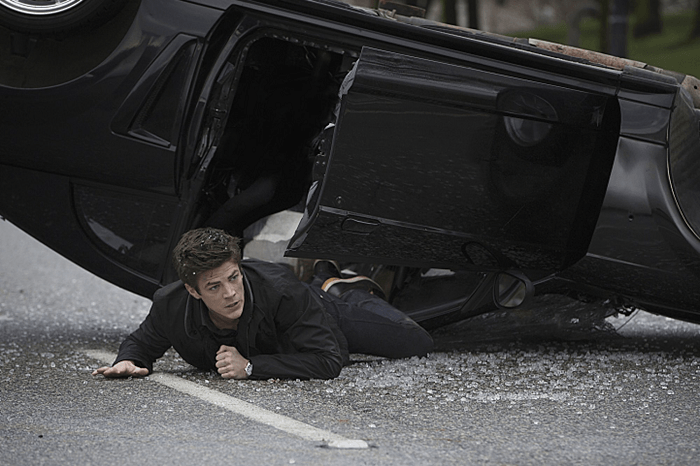 The Flash is here! And the pilot opens up with the typical attitude of a CW show that wants to stay on the air for multiple seasons by leaving little nuggets of suggestion scattered throughout the first episode. We can safely assume we’re in for the long haul with Zoom murdering Barry Allen’s mother from jump and Grodd’s cage being torn open at Star Labs, which everyone meanders by without even the slightest bit of curiosity.

I’ll be the first to admit, Grant Gustin is the perfect cast as The Flash, if only they’d write him a little less like a teenager going through puberty. Young Barry Allen on the other hand is gawd awful and that kid’s parents need to take him back to acting classes. Yes, I’m soulless when it comes to child actors doing a terrible job. Detective West (Jesse L. Martin) is another solid casting and it’s nice to see a bit of color on the show between he and his daughter, Iris West, played by Candice Patton. Again, the upside of the great casting job here can only counter the sub-par writing so much as Detective West plays the stereotypical surrogate father who takes his job as a father way too seriously and adds to the teenage facade that glazes over the entirety of the show. Iris West plays her own stereotypical role as the clueless love interest that we all know will eventually be woo’d by Allen but not before much suffering on his part.

The show opens with Barry Allen as a youngin’ who witnesses Zoom killing his moms and we flash (pun intended) forward to grown up Allen who seems to be a forensic investigator for the police. After a bit of character setup, we move into the creation story of Allen wherein a quantum explosion at StarLabs releases all sorts of dark matter, dark energies, and anti-matter into Central City that’s going to create 10 seasons worth of low budget villains for Allen to snub. The first of these is Clyde Mardon who has been speculated to actually be the Weather Wizard.

This burst of energy also creates a lightning bolt that strikes Allen in his lab and puts him in a nine month long coma. He awakens to his own superhero crew of scientist sidekicks that make awesome gadgets for him to use and quickly begin to benchmark his abilities. Allen ultimately catches up with Mardon who decides his goals are bigger than robbing banks and instead chooses to create a tornado and head to town. I’m not making this up, it’s as if they were designing a game where the first mission’s boss is the perfect match for a newbie who’s unlocked one power on the skill tree. Allen unravels Mardon’s tornado by traversing it’s direction and Detective West opens up on Mardon right before he’s about to shoot Allen.

I had hopes of a Smallvillesque approach to The Flash but from the first episode alone it seems as if there’ll be a ton of filler episodes that air throughout the season just to pass the time as they slowly prepare Allen for his showdown with Zoom some odd number of seasons away. I hope I’m wrong on this but The Flash lives up to it’s name and that’s not in the flattering way.