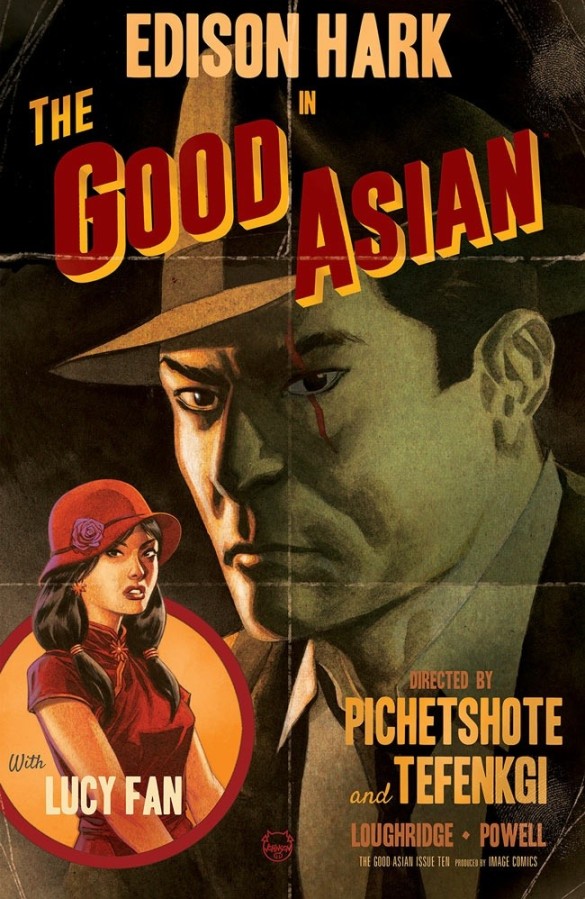 It’s been a little less than a year since the first issue of The Good Asian came into the world. It entered the world at an eerily appropriate time, with almost prescient thematics and character. Edison Hark, a Chinese-American detective uncovering a vast conspiracy, has been through quite the gauntlet on behalf of his adoptive family. His surrogate brother, dead. His ex-girlfriend, the mastermind behind the inciting incidents that nearly killed Edison. His adoptive father, somehow implicated in his mother’s murder. We have been through quite the roller coaster, and one way or another, this mystery has to come to an end.

The Good Asian #10, in classic noir form, starts with a flashback that quickly gets the main cast in their places and kicks off the final issue with a kinetic start and emotional jolt. Tefenkgi’s art and Lourghridge’s color do an absolutely spectacular job of staging the non-linear scenes and conveying a full spectrum of expression and shock. There are moments where we are simply observers of the events. Then, there are pages where we get to see the world with Hark’s keen observational skills, spotting key details and making quick connections, and deftly bringing the entire series’ timeline into vivid clarity.

Pichetshote’s ability to weave such a mystery together is nothing short of inspiring. The classic noir monologues and all of the pieces falling into place leave me with a very specific elation because all of the lingering threads are tied with an intense intent. The circumstances involving Ivy Chen’s disappearance manage to dovetail perfectly into the other long-standing question of the series. It all culminates with the imperfect Hark launching into a perfectly justified diatribe against the society that fostered all of this needless death borne of prejudice.

But like other famous film noirs before it, The Good Asian #10 has an ending that is not so perfectly cut and dry. Even though a mystery has been solved, the world is still very much in disarray. However, Pichetshote has manages to bring this chapter of the story to a perfect close.

Enjoying The Good Asian? Check out BNP’s other reviews here.