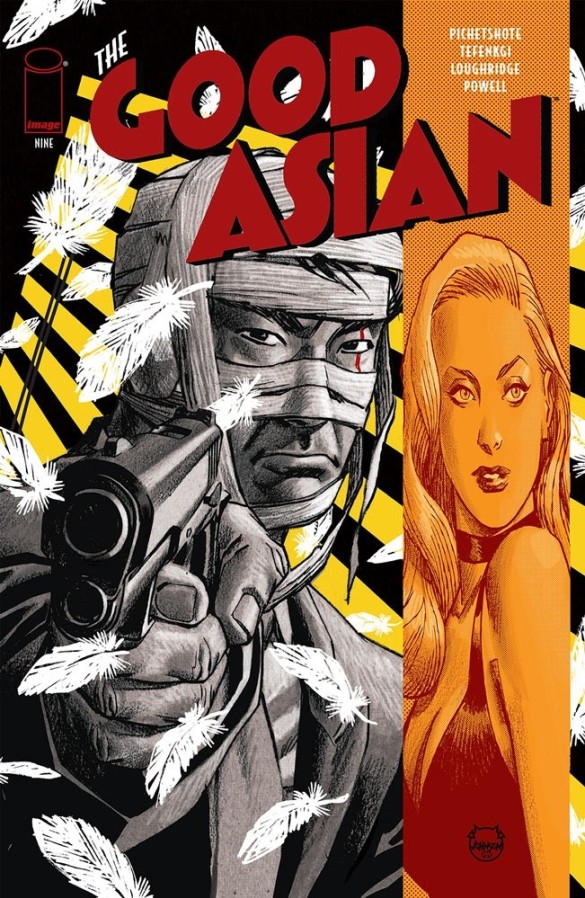 Over the past year, we have been diligently following the misadventures of one Edison Hark, a Chinese-American detective who found himself embroiled in several conspiracies, encountering serial killers, and police who actively wished him dead (a slight distinction I suppose, but one that must be noted), and as of last issue, death itself. The Good Asian #8 situated the perspective around Lucy Fan in the aftermath of Hark’s death post a factory explosion after a conflict with the Hui Long and Mr. Nash. However, the final pages revealed that Hark was very much alive, and the mystery behind Ivy Chen’s disappearance and the dark dealings of Hark’s former love Victoria Carroway still had plenty of loose ends. It’s 1936 folks and hits just don’t stop coming.

The Good Asian #9 flashbacks to the coda of The Good Asian #8 and lets Pichetshote explain the circumstances that allowed Hark to escape the predicament and also give more time to show some poignant backstory. Watching a young Edison Hark talk with three different parental figures, each giving him drastically different advice and muddling his sense of identity, hits like a goddamn truck. As a mixed Filipino-American myself, this conversation resonated deeply and are perfect examples of why I have latched onto Hark as a protagonist. His internal struggles, his processing of the impossible situation he is constantly thrust into, the slow iteration to becoming better as a result, it’s all wonderful. Pichetshote is in his element, expertly writing a historical fiction film noir with modern sensibilities that are amplified by all of the current events in 2022. It’s an aggressively timely piece that will remain relevant for decades to come.

Edison might be bandaged after the skirmish, but he is still very much the brilliant detective we have come to know and love. The Good Asian #9 lets him flex all of his skills in a visually stunning manner as he juggles pieces of separate puzzles all while trying to survive. I gotta give props to Alexandre Tefengki for create some beautifully cinematic shots. One page, we see a unique panel arrangement that shows Edison’s mind palace processing evidence and then next we have an ultra-kinetic fight sequence that gets the heart racing.

This is exactly what an penultimate issue is supposed to do: set the stage for the finale, amp up the anticipation and excitement, and continue to re-contextualize past developments in new light. The conclusion to Edison Hark’s journey next month is going to be a highlight of my year, and I’m sad to see the story come to an end. Nevertheless, I am ecstatic that such an ambitious story is going out as brilliantly as it started.

Enjoying The Good Asian? Check out BNP’s other reviews here.