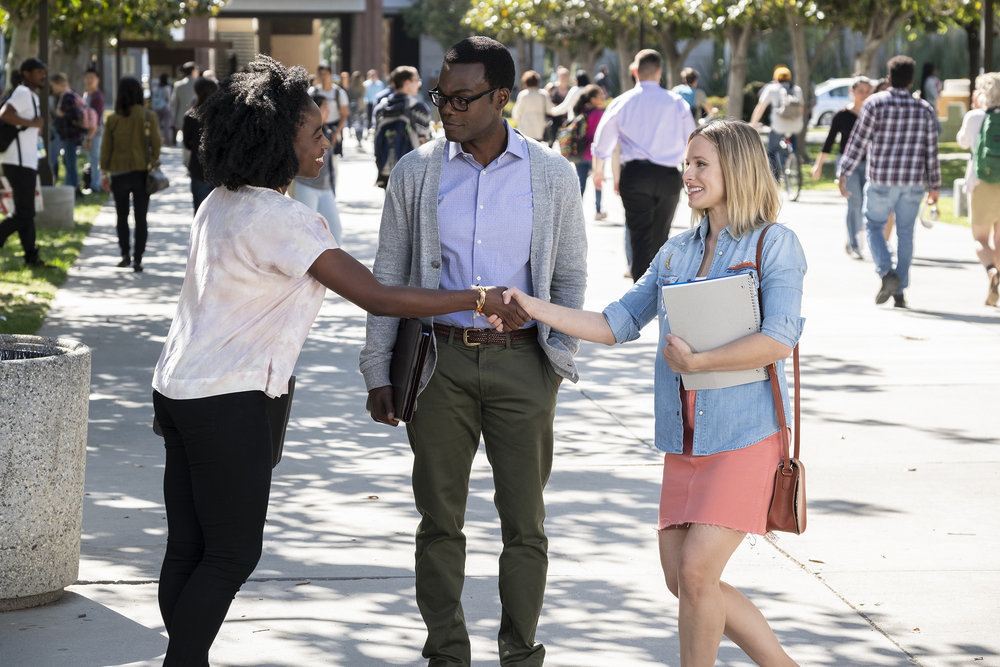 Spoilers marathoning NCIS with The Judge.

Holy shirt, The Good Place is byke! If you’re just tuning in now, stop. Turn around and go binge seasons 1 & 2. THEN come back. I promise you won’t regret it and I’ll be here when you get done.

When we last left our intrepid quartet, everyone was back on earth enjoying their second chance at life. Eleanor had gone good then bad then, after meeting a suspiciously Michael-shaped bartender, decided she needed to go good again with Chidi’s help. Cue our girl in Australia busting in on Chidi’s office hours and once again white-girling her way through his last name. Oh, Eleanor.

And Now for Now Which Is Actually Then

Michael’s strutting his way down an otherworldly catwalk to hand over his Earth pass to The Doorman. Because life may be temporary but bureaucracy is eternal. Michael’s heading down to stop Eleanor, Chidi, Tahani, and Jason from kicking the bucket to see if they can earn their way into the real Good Place this time around. He mentions it may cause a few hiccups to the timeline…which sets the stage for a later joke at the expense of us living in this dark ass timeline. When it happens mid-season, remember I called it here first.

The Doorman, in true “government” drudge fashion, is here for none of Michael’s shit and sends the reformed demon off. Before he leaves though, they talk about the Chekhov’s gun — I mean the key — that surely won’t be important nor duplicated late. After all, it says “Do Not Duplicate” right on the key and we know that shirt is sacrosanct.

Back to Life, Back to Reality

Michael pops on down to Earth, excited that he’s gonna have to face the horrors of public transportation. You can take the demon out of torture but you can’t take the torture out of the demon.

We watch Michael discreetly save Eleanor from her death by shopping cart and delivery truck, Chidi from being crushed by a falling air conditioner (which was honestly my fear living in NYC and if you didn’t think of that now you will so you’re welcome), Tahani from smushing herself trying to destroy her sister’s effigy, and Jason from suffocating in a closed safe trying to conduct a robbery.

We watch Michael and Janet watch Eleanor, Chidi, Tahani, and Jason go back to being the trash bags that they were. So Michael decides to do a bit more meddling. Incognito like. Michael plants the seed in Eleanor’s inebriated mind which leads to a Chidi YouTube rabbit hole which leads to AUSTRALIA! Eleanore asks Chidi to teach her how to not be a dink and Chidi immediately says yes. Ayyy! Team Soulmate-ish is back in action! But why is flip-floppy pancake Chidi suddenly a man of action?

Sidebar: Eleanor pronounces GIF like the peanut butter so are we sure this isn’t still the bad place?

So, why is Chidi suddenly so decisive? Flashback to headash Chidi being headash and narrowly escaping getting mashed by his window unit. He panics his way right into the office of neuroscientist (drumroll, please) Dr. Simone Garnett, PhD — a gorgeous, brilliant, stylish, dark-skinned Black woman. Fina-forking-ly. I done watched for two seasons just to get a sliver of Maya Rudolph at the end of last season. It’s about time they had another Black woman on here. Geez.

Simone agrees to scan Chidi’s brain because he’s a glorious forking mess. Hanging around the awesome Dr. Simone (yeah, she’s my new fave. Fight me.) finally gets Chidi moving. He tosses his terrible 3 billion page thesis and actually starts making moves. Everything is good and dandy until he convinces his buddy Henry (of the red boots) to get in shape and dude manages to snap both his legs. Then we’re back to square one.

Chidi’s benching out in the library when he has his own Touched by a Michael moment, complete with terrible Australian accent.

Meanwhile, in the Bad Place

Shawn has his team of tech demons working around the clock on their shirty machines to hack into the Judge’s system and find the ones that got away. But honestly, he’s doing more cocooning than working. And all to the sweet sounds of Richard Marx. Shade.

Simone runs into Chidi and Eleanor and the two women immediately come to blows in jealousy over who gets to hump Chidi. Just kidding, they’re super nice to each other and Eleanor even convinces Chidi to ask Simone out. You know what, Eleanor, I ship it too. Shidi? Chimone? Plus soulmates can be bffs! They don’t have to bang. Janet knows what I’m talking about.

Michael is less confident. He heads back to Earth, which gives Shawn the backdoor he needs to get into the Judge’s system.

Eleanor continues to be a Shidi shipper and encourage Chidi to get his weight up. But then a spark! Chidi knows what his thesis is gonna be! Then smooches, and we’re one step closer to collecting Tahani and Jason.

Tahani shows up in Chidi’s office three weeks later and we find out what the fork she’s been up to all this time.

Back at the party for Kamilah’s induction into the Rock & Roll Hall of Fame, Michael shoves Tahani out of the way before she gets flattened by the statue she’s trying to destroy. Incensed by her brush with the death, Tahani rids herself of all of her material possessions, celebrity contacts, and books a flight to a Buddhist monastery. Flying commercial coach because she’s slumming it, but Comfort Plus because she’s still Tahani.

In the monastery, Tahani manages a life of simplicity until she realizes that this simple life would make an excellent book. Then it’s back to the spotlight with her best-selling book “Get Out of the Spotlight”. She’s at fancy launch party when she gets cornered by Michael posing as an investor. He congratulates her on being a scammer and successfully gets her into her own head. When Chidi calls asking her to join his ethical study, guess who’s on the next flight to Australia.

Sidebar: So who else is shipping Eleanor x Tahani now? It can’t be just me, right?

Three Down, One to Go

Michael finds Jason down in Jacksonville throwing rocks in contemplative melancholy. Turns out, the year’s been pretty rough for the brainless bombshell.

After escaping the airtight safe he locked himself into to rob a Mexican restaurant, Jason decides to change his life. He skips over the flyer for Jacksonville Community College — which literally says “Change Your Life” — and grabs the one for a dance competition. He gets his crew together and, after losing the lazy members and the ones who prefer a life of crime, he takes the rest of his crew to win. Dance, Dance Resolution — who happen to be quite good — go on an epic losing streak. Then it’s back to crime.

Jason gets arrested then bailed out by his friend. Jason can’t be cheered up but nothing helps. He pops a Vicodin and heads off the throw rocks.

Michael has a moment of open honesty that he manages most easily with Jason and convinces Janet’s boy to head to Australia. But first, that Vicodin turns out to have been a laxative. Oh, shirt.

Satisfied he’s gotten the crew together, Michael heads back to the ticker tape observation room. But not before he drops off a thermos with a frog on it for The Doorman. And wouldn’t you know it, that motherforker pops a smile. That’s so sweet.

Janet asks about her boo, Jason, and the Judge pops in for a visit. But they can’t let her check the human’s progress because that would seriously fork up everything so they send her off to watch more Mark Harmon in Stealing Home. And everything is going smoothly.

Except. There’s a fifth person in the study. Who is it? It’s Trevor.

Now ain’t that but a bench.