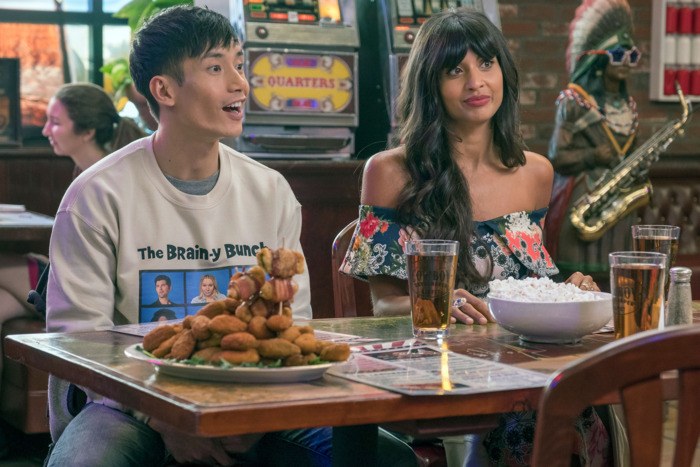 Here we are in The Good Place a good ‘ol BNP recap. So last we saw… in real Good Place fashion we had been left with a cliffhanger – a demon infiltrating our friend group on earth. The most evilest demon of all… Trevor. Dum dum dum. I just love that the most evil demon of all is Adam Scott (Parks and Rec). He is so good at being the most annoying guy lol!

So we see him enter the study with a killer box of lemon squares and just praising Eleanor with gushy loving energy and all sorts of fun group activity ideas and nicknames and ways to spend time together, yes Eleanor’s personal hell. Through this Jason is getting a kick out of it all. I guess Trevor’s goal was to destroy Eleanor and the whole group will fall apart because Jason is having a blast.

Just before getting their first MRI scans Tahani finds a way to talk about how garish she is, asking if wearing a gold bra will affect the machine. The jokes on this show are just spot one with character establishment, I love it.

Like how after the MRI scan Trevor takes them to the most “American” restaurant in Australia, the “Cowboy Skyscraper Buffet.” A place where the hostess is doing a country accent and a gun will go off when your table is ready, and the manifest destiny package allows you to forcibly remove anyone from their table – again solid jokes. It’s the little things that get me though, they get seated at the “Montana” table and the free appetizer for the table is popcorn. It’s the type of comedy that makes you sigh and shake your head in agreement. 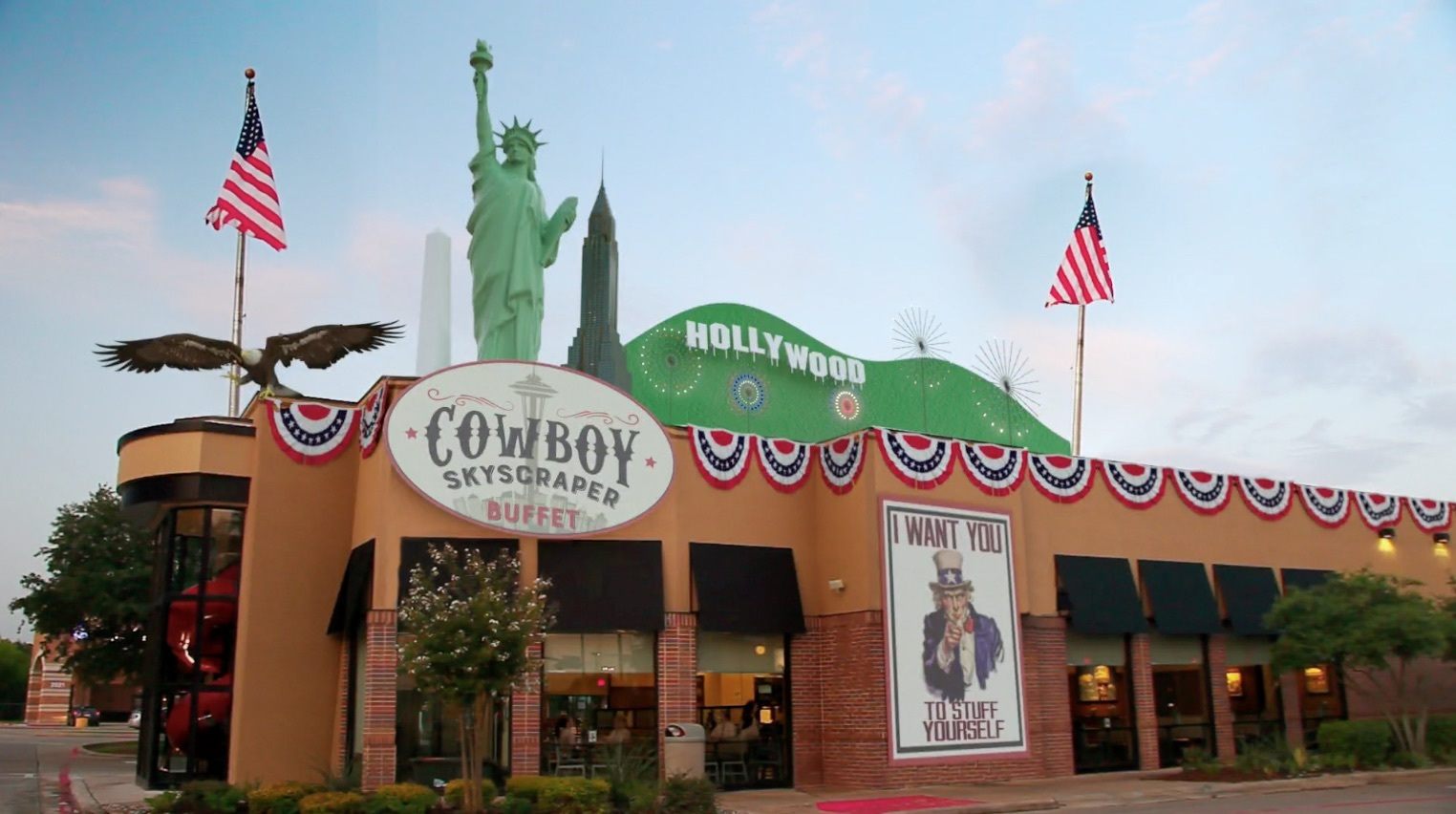 So once Michael knows what is going on, he confronts Trevor at the restaurant in a trench coat and hat hehehe. Mind you Michael is back on earth yet again… he tries to get to the bottom of what is going on and why Shawn sent Trevor. Of course he’s a demon and is a dick to Michael, and they’re demons, they just wanna destroy Michael this way because it’s more fun. Shawn gives witty insults and Michael, he’s just been hanging out with humans too much he’s a little rusty. And there is nothing Michael can do since he’s already meddled too much, they’ll recognize him and know something weird is up.

Back at the table while wearing their “Brainy Bunch” sweatshirts Trevor made (yea he’s good…) You see with every minute Eleanor is slipping away from the group. 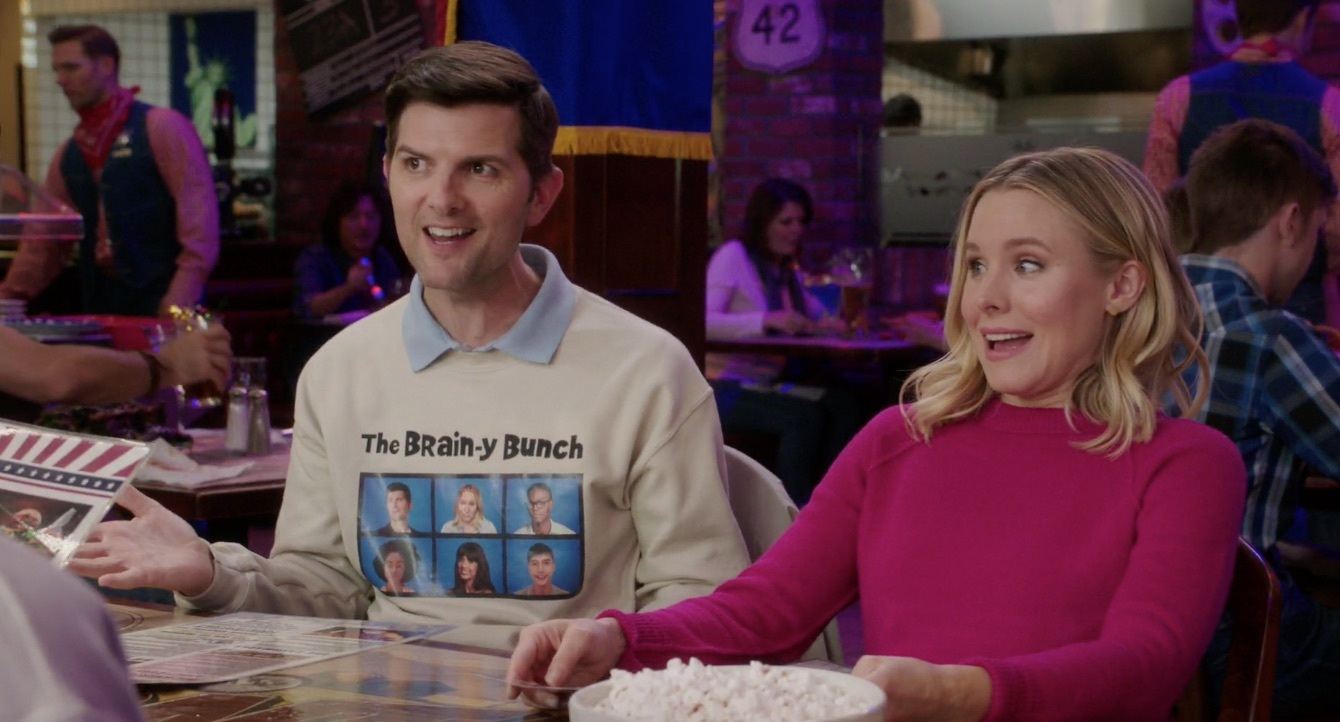 The waiter comes and it’s Janet! Michael has roped Janet into interfering in the friend group to try to get Trevor to leave. Hilariously it doesn’t work because Janet starts freaking out because her powers don’t work on earth. She tries to summon beers and welp nothin. While she has to manually get beers, Michael checks in to see how it is going and Janet is freaking out that she isn’t downloading new information, that she can’t summon things, she is a mess. Basically this rescue mission is failing.

Trevor at the table continues to succeed making Eleanor feel all the most uncomfortable feelings. All he has to do to run Chidi’s entire life is ask if it’s an issue that he is fraternizing with his subjects. You can just see all the wheels in his head on knocking into each other and destroying his psyche. Eleanor catches up to him to say she is dropping out of the study because the “group thing” is just not working for her. She really liked it when it was one on one lessons – this is where you see the feelings she has for Chidi showing through. If they only knew how many rebooted scenarios they have lived through.

Chidi is all like freaking out that they are even talking since he’s in the sunken place playing out all the implications of being friend with his subjects – then doesn’t sleep at all contemplating the error of his ways!

In the meantime Trevor is getting Tahani and Jason drunk trying to get them to go home with each other right in front of Janet! How rude – you can’t mess with my Janet, that is my girl! Oh yea and Jason and Tahani hooking up is not meant to be, but we’ve seen that play out before.

Michael and Janet roll up on Trevor in the bathroom – I was immediately curious as to why he – a demon was in the bathroom. Which Janet addressed, thank you Janet. He sticks his hands in toilets so he can give people pop handshakes. WTH – demons am I right!? Sad that Michael shakes his hand lol. Basically Michael is all like – he knows once they’re all together they can’t lose! So sweet.

So the next day we see Chidi legally insane from lack of sleep and his girl Simone very worried. I like her btw, so I don’t know how the many love triangles will play out but I’m here for the comments for sure. So he pours his frustrations out on her, she’s like – it’ll be fine, but he needs to sleep, that is obviously more pressing. 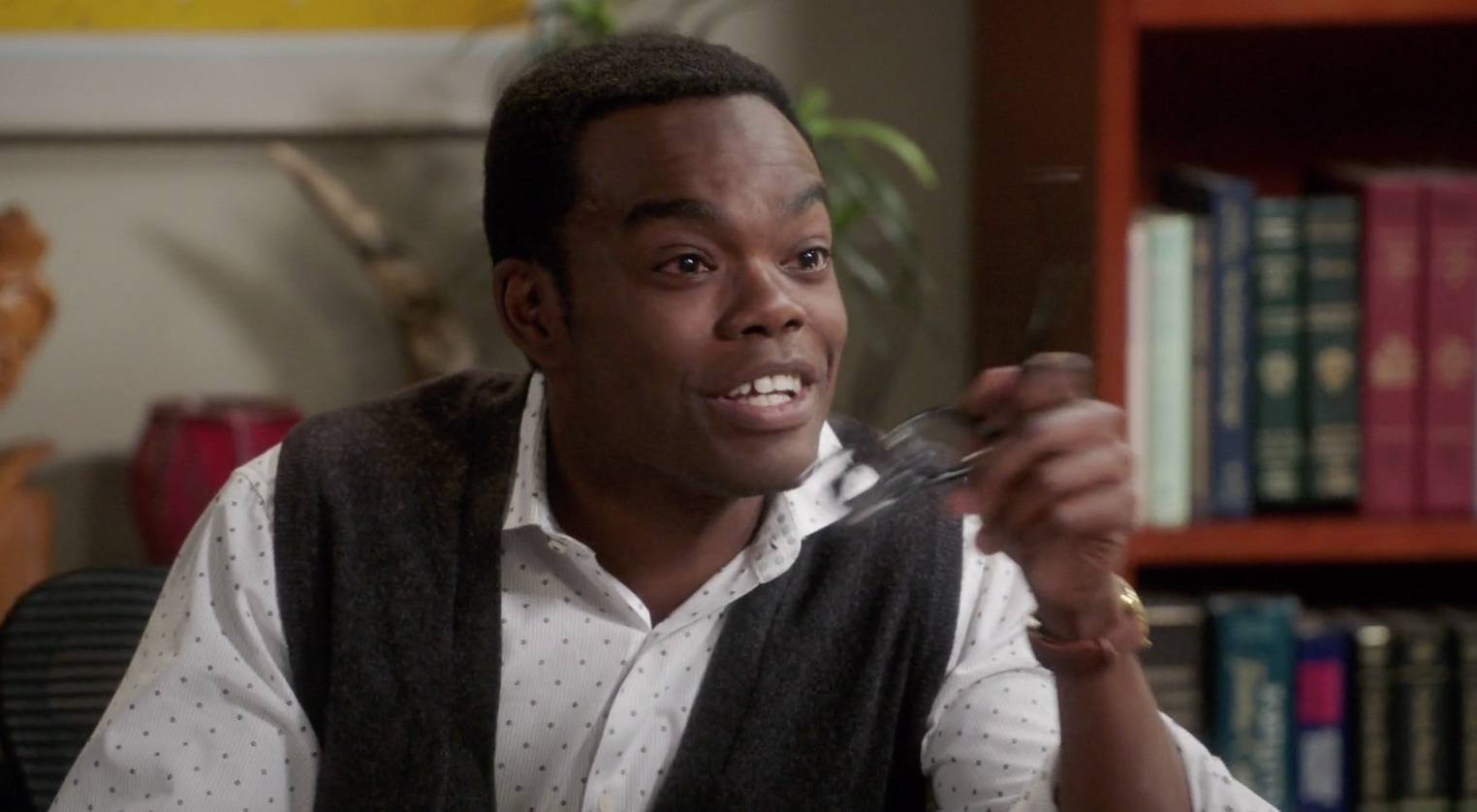 Once everyone arrives for the days trials, we notice Eleanor is not there (not a surprise). Chidi feels a way (cough cough) and Simone calls him a cab to bring Eleanor back. Magically he is coherent enough to tell Eleanor how he believes she needs to come back to the study. Eleanor is a jerk. THEN she decides to come back lol.
Back at the university Trevor is ready to pat himself on the back for a job well done when Tahani and Jason reveal they did not sleep together. Jason was a complete gentleman and slept behind a dumpster…not cuz of Tahani but cuz he’s Jason, and forgot where he lived. ‘Sigh smh.’

Back in the bathroom, (because this is a demon confronting meeting place I guess), Michael is boasting about his win that the friend group is just too tight for Trevor’s antics – the judge comes bursting through the portal! The jig is up! All three of them are taken back to the..umm… the judging void?? I guess that’s what it is. You gotta love Maya Rudolph, her portrayal of the judge is so fun, I could watch her react to just the smallest things all day. She throws Trevor into the abyss cuz he just starts sucking up. She is waving her arms like she’s praising but is UPSET!

She tells them because of their meddling weird things are happening and just describes real life news. They could have brought in the mess of the presidency but they didn’t I appreciated that actually, would a been too easy.

She declares no more meddling and says Michael has to go back to the bad place and Janet back where she belongs. But Janet is all like but Michael will be retired and I’ll be marbled. She’s all like wavy arms you shoulda thought about that before you meddles on earth”

Next thing you know Janet is holding a beer and things start appearing. Janet is backlogged! And all her failed summoned items are coming in now, making a literal wall between them and the judge.

Michael and Janet make a break for the portal to earth. The gatekeeper guy and them have a stare off, then he throws him the keys! They escape. I’m Excited to see what happens then cuz won’t they be stuck on earth? And can’t the judge just come get them again? I’m sure they will find a witty way to get around that. We’ll see!